I need to find the location of the entrance pupil in Mitutoyo objectives (5X,7.5X, 10X).

For lenses there are several ways to do this, the simplest being to stop the lens down and just look. This can then be measured by focusing on it with another lens - Rik has posted about that in the past.

However, there is no diaphragm to stop down with microscope objectives. In some of the Mitutoyos you can see something limiting the aperture, but it is not always apparent from the front.

Any ideas? The Mitutoyo catalog discusses exit pupil diameter which is just 2*NA*fl where fl is the focal length.

I was hoping to measure this empirically rather than calculate but I would be OK calculating it.
nathanm
Top

I don't know where the pupils are located.

If I wanted to know that, I would shoot two frames in front and back of focus, let Zerene Stacker align those, then combine the computed scale factor and the physical distance between the two focus planes to compute where the entrance pupil must be.

I have a vague memory that the 10X exhibits something like 1 part in 10,000 scale change per focus step. Assuming a 5 micron focus step, that would put the entrance pupil about 50 mm away from the subject (because 0.005 * 10000 = 50). I forget whether the perspective is normal or inverted, so I don't know whether the entrance pupil is in front or in back of the subject.

In any case that memory could be trash, so don't put much weight on it.

Thanks! Is there a good way to empirically test that?
nathanm
Top

Michael, what technique are you using to measure the pupil ratio?

The reason I ask is that with lenses that are near telecentric, standard techniques for measuring the pupil diameter cannot be applied. This is the case with many microscope objectives, definitely including the Mitutoyo 5X that I'm looking at right now.

Nathan, how do you plan to use the result? Are you planning to do stack-and-stitch by rotating around the entrance pupil?

I had a much simpler plan - which is to make 3D printer lens hoods to keep flare out. The entrance pupil is necessary to do that accurately, although one can do it more simply
nathanm
Top

Then I don't understand why you need the entrance pupil. You have the NA and you know the field size. Why not just run cones with angles corresponding to the NA, from the edges of the visible field? It's not quite as exact, since there's no guarantee that the edges of the field get the full NA, but seems like it should be pretty close and much easier to understand.

yes that is an alternative approach.

The simplest is to linearly interpolate between the front element and the field of view.

The location of the entrance pupil could potentially modify that, but probably not a lot.

I was admittedly being a bit more precise than I need to be.
nathanm
Top

I should add that I am making hoods with complex internal baffles, not just a simple tube. So the hood depends on the path of all of the rays necessary not to vignette.

I will post a photo of the ones I have done for other macro lenses tomorrow.
nathanm
Top

About 4 years ago there was a long discussion about optimal shape for baffles that would not block any image-forming rays.

I found the thread some time ago and it was very helpful thread to me figuring this all out. and I have been making conventional lens hoods which I will post photos of tomorrow.

Here is the rendering of my hood for the Mitutoyo 10X, prior to heading out to the 3D printer. 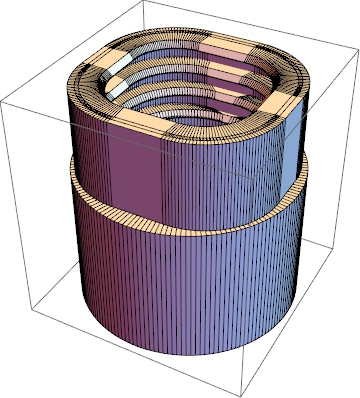 Of course whether it works or not ultimately will be empirical.

As per the referenced thread, in this case the no-vignette region interpolates between a circle (front element of the objective) and a rectangle (field of view at the working distance of the objective).

In a typical macro lens the key circles are the entrance pupil, and (for wide angle lenses) the front element. If every part of a scene can "see" the entirety of both, then it won't vignette.

In the hood shown in the diagram I ignore the entrance pupil and just interpolate to the front element. If the entrance pupil of the objective is in front of the lens then I could get away with a slightly different set of baffles, but they would be smaller than these.

The baffles are spaced so that stray light must reflect off the hood at least 3 times before it enters the lens.
nathanm
Top

i used the method with a macro objective with shallow dof and made sharp images of the entrance and the exit pupil using a white background to determine the pupilary magnification. That is to my knowledge a standard procedure.

Your question makes me thinking. Making the lens telecentric means that the limiting aperture is placed in the rear focal plane of the objective, which possibly is behind the lens group. Then the exit pupil should be determined by the diameter of the objective on the rear side and the entrance pupil is the image of that diameter? But this is just the situation of a limiting aperture placed behind an objective - do our formulas employing pupilary mag are invalid for this situation? Still learning ....
Top

michael_r wrote:i used the method with a macro objective with shallow dof and made sharp images of the entrance and the exit pupil using a white background to determine the pupilary magnification. That is to my knowledge a standard procedure.

That method works fine for lenses whose pupils are easily accessible, so that you can focus on one pupil and then reverse and reposition the lens so as to focus on the other pupil.

However, it fails completely for a lens that is perfectly telecentric, because then one pupil will be located at infinity. Even for lenses that are only near telecentric, the method can fail because the lens used for testing may not be able to see and focus both sides of the entrance pupil at the same time. An example is given below.


do our formulas employing pupilary mag are invalid for this situation? Still learning ....

As far as I know, the formulas are still valid as one approaches telecentric without actually getting there. At perfectly telecentric, the formulas involving pupil factor break down because one pupil diameter goes to infinity. Somewhat before that point, you encounter the practical difficulties mentioned above.

In any case this objective is so close to telecentric that its deviation is in the noise for the Zerene Stacker alignment test. According to the one test that I ran, advancing the objective toward the subject by 20 microns per step, the three frames around perfect focus had scale 1 (by definition), 1.0000049, and 0.999924. The camera sensor is only 4752 pixels wide, so in these three frames, the measured misalignment due to perspective scaling is only about 0.18 pixel at the edges of the frame. Based on the position of 43 cm in front of the objective, which is about 400 mm beyond the subject, the expected scale change per 20 micron step would be about 1 part in 20,000, closer is smaller, so an expected value of 0.99995 per step if I've worked the math correctly.

Rik, Really interesting indeed. If i look into my MTTY5 i can see your point, but the 10x behaves somewhat different and i can see a sharp circular boundary over a wide range of distances to the eye that i considered to be the entrance pupil. 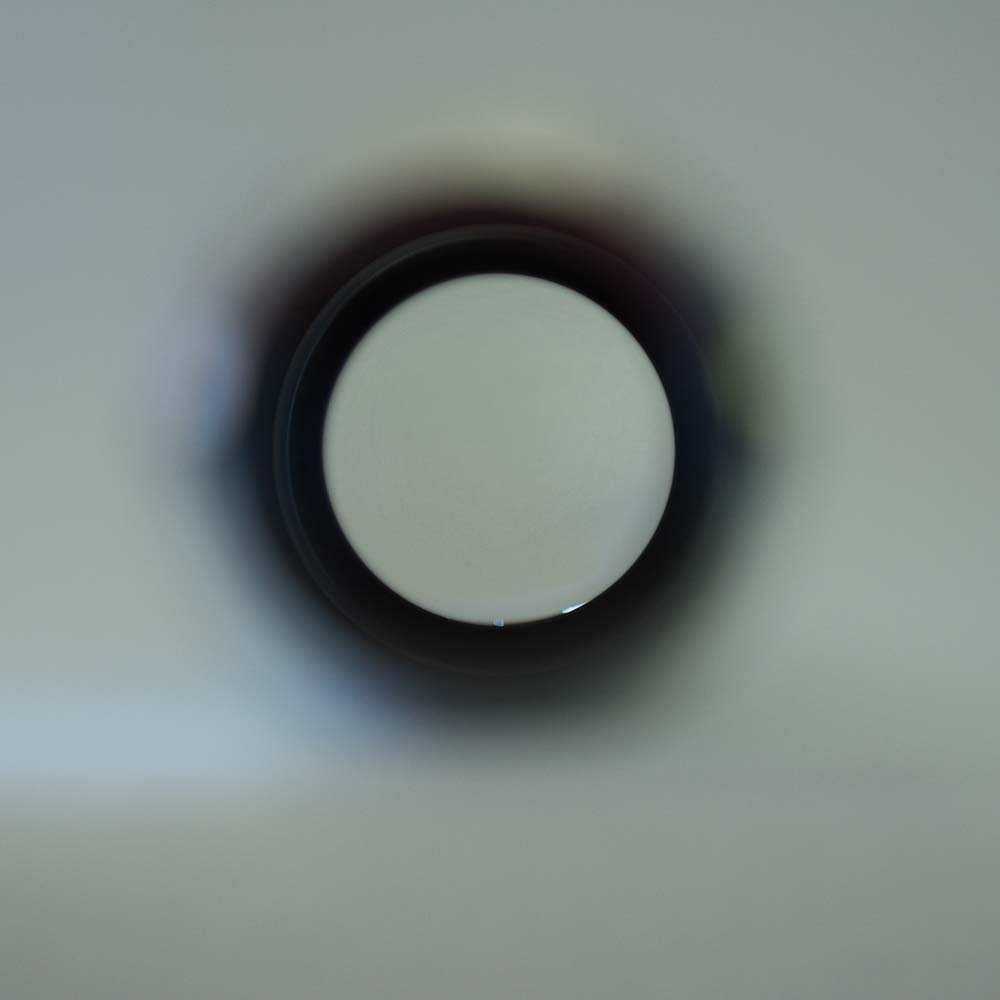 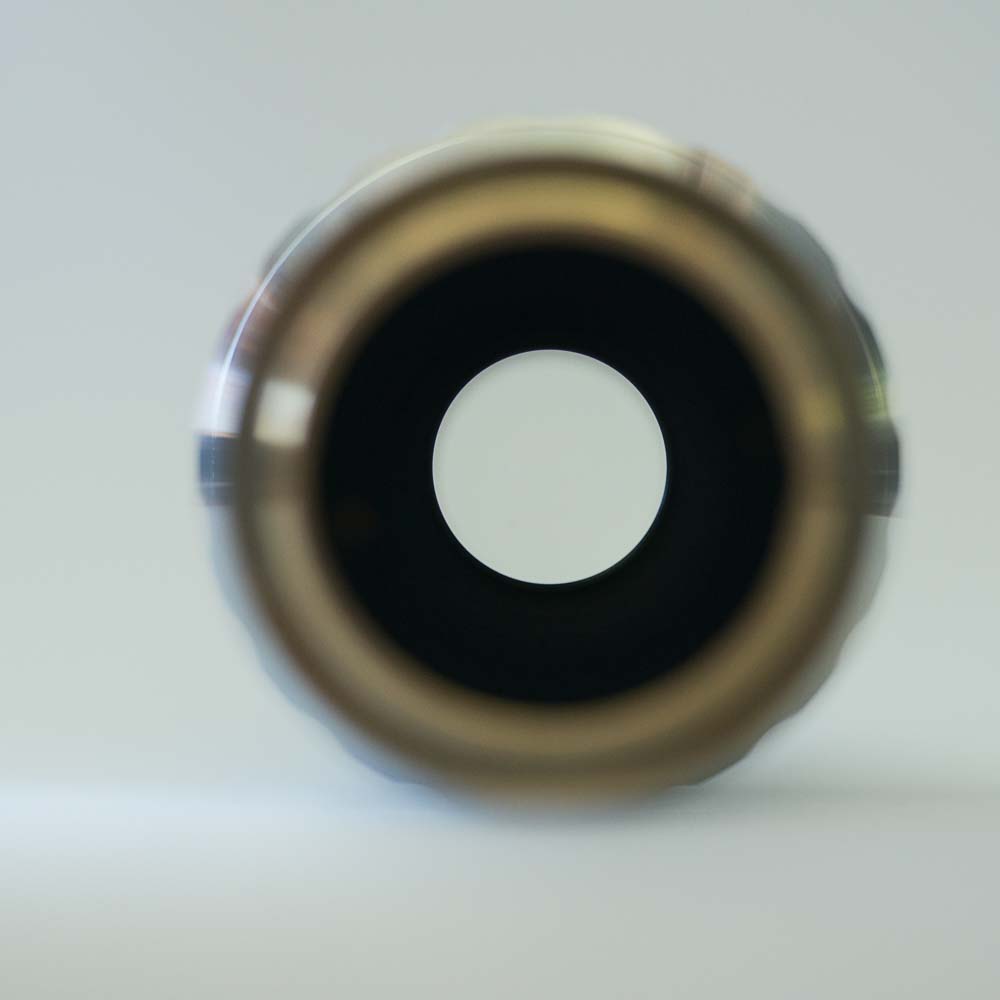 confirming my older result of a pupilary magnification of 0.67 with a different setup and macro lens.

Today i used a sigma 150 mm (old measurement with canon 100) set at a distance of approx 0.47 m and manual focus. So apparently the ratio does not depend on viewing distance. This meets my expectations in contrast to the other result:

In order to get information on the location of the entrance pupil i shifted the camera from the position of the first figure showing the assumed entrance pupil on a rail until i got a sharp image of the front ring and i had to reduce the distance to the objective by ca. 4cm to arrive at this image 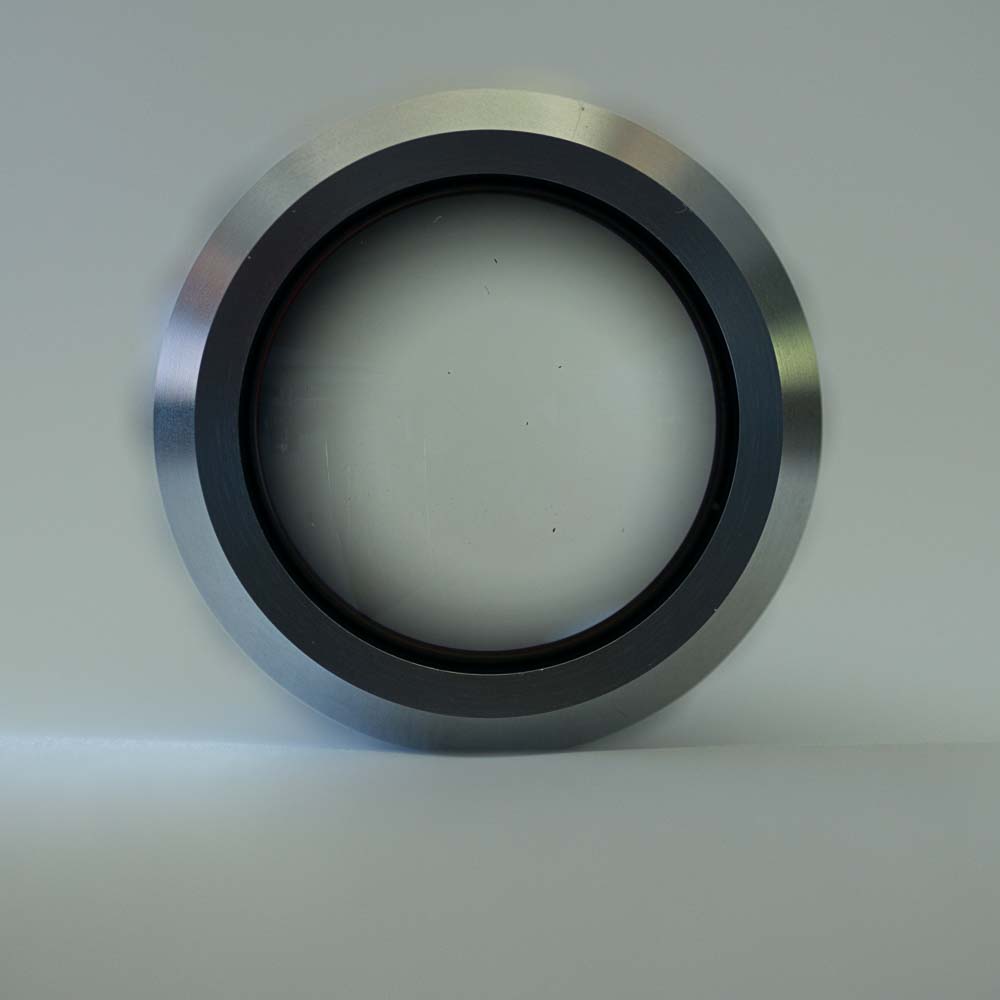 From this i would like to conclude that the entrance pupil lies approx. 4 cm in front of the objective, which is in contradiction with my computation using conventional theory.