I've been working on testing my new Olympus E5MII and PEN-F cameras. Results have been mixed, with some disappointments and some nice surprises.

First the good news. In high resolution mode, both cameras can use flash with the fully electronic, completely vibration-free shutter, even though the E5MII cannot use flash with this shutter mode in regular shooting. (This limitation must just be a software oversight; I hope Oly corrects it in a future update.)

Today I tried this high-resolution mode with the PEN F on a Stackshot, using a Mitu 10x objective and the 75mm Oly f/1.8 as the tube lens. The field of view is 4.6mm. Step size was 5 um.

I did the stack first with the 50 Mp hi res jpgs. Here is the full 50 Mp DMap image, reduced to forum size. It has all its haloes etc...no retouching. Then there is a detail near the lower edge (but not at a corner) at 100%.

Don't worry about the mess in the upper half of the photo; I didn't do the whole stack. I still don't have a cable to connect the camera to the Stackshot so I had to do it manually, and could only spare an hour, so I only did the bottom left half of the image (more or less), 50 steps in total, but that should be enough that any potential problems would be visible. 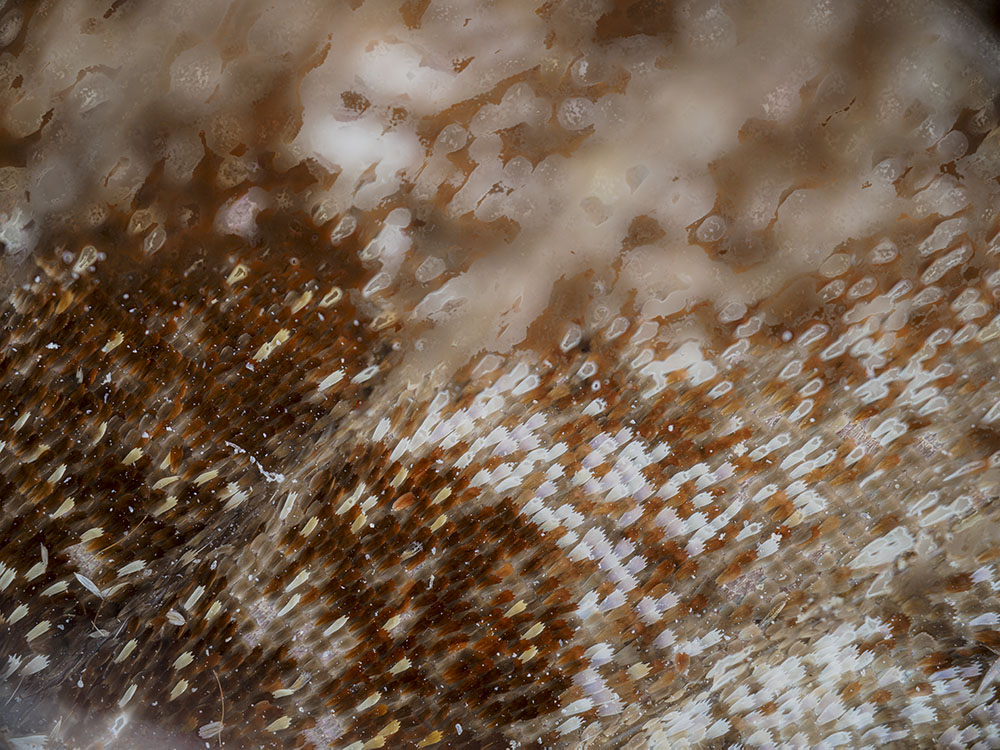 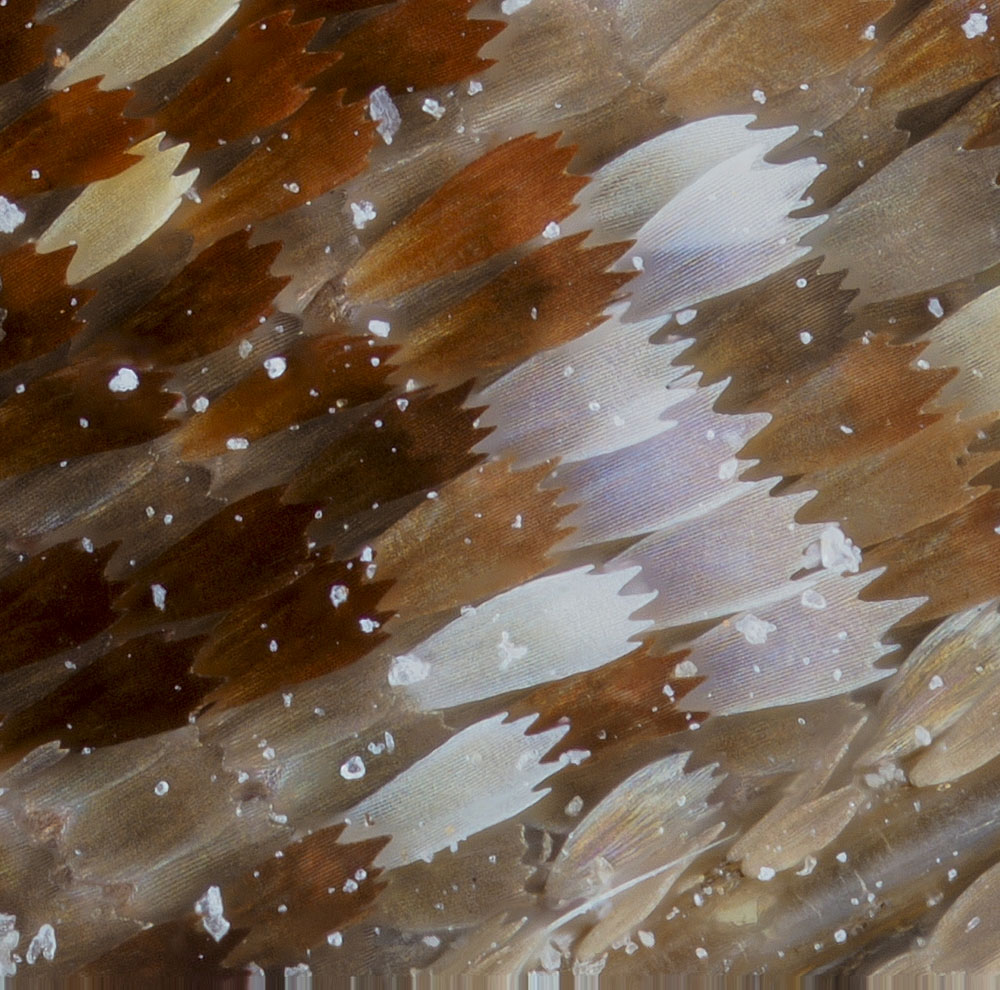 Then I stacked the original 10000 x 8000 hi res raw files after converting them to tiffs. The DMap result has been lightly sharpened and adjusted for exposure and contrast. The whole image, and then the same lower edge as in the jpg test above, at 100%. 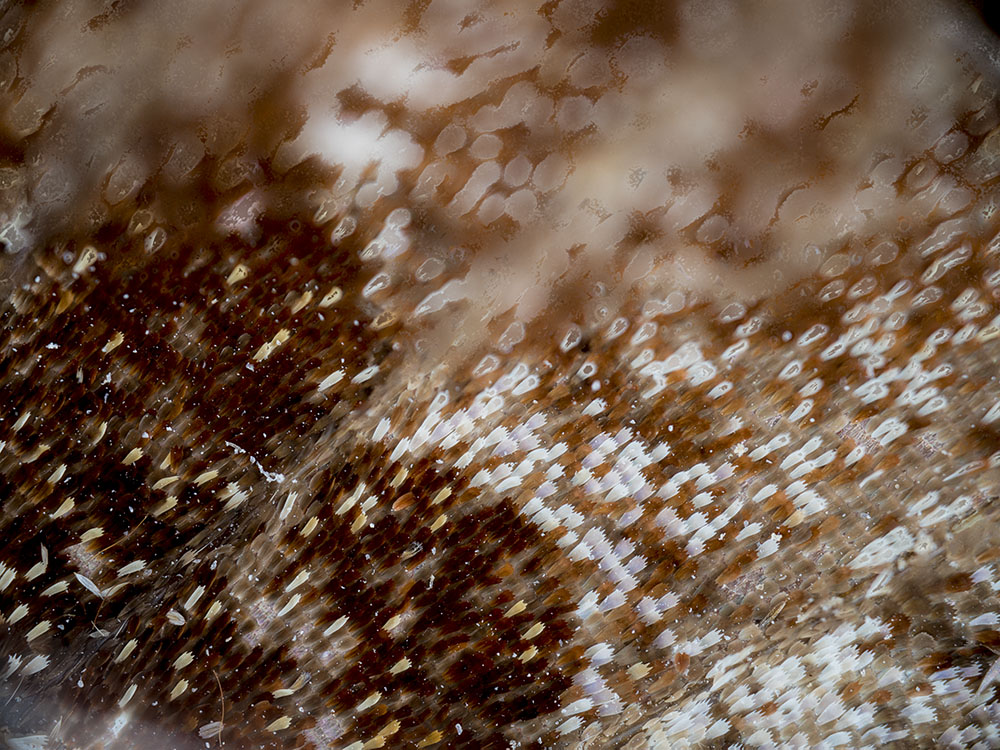 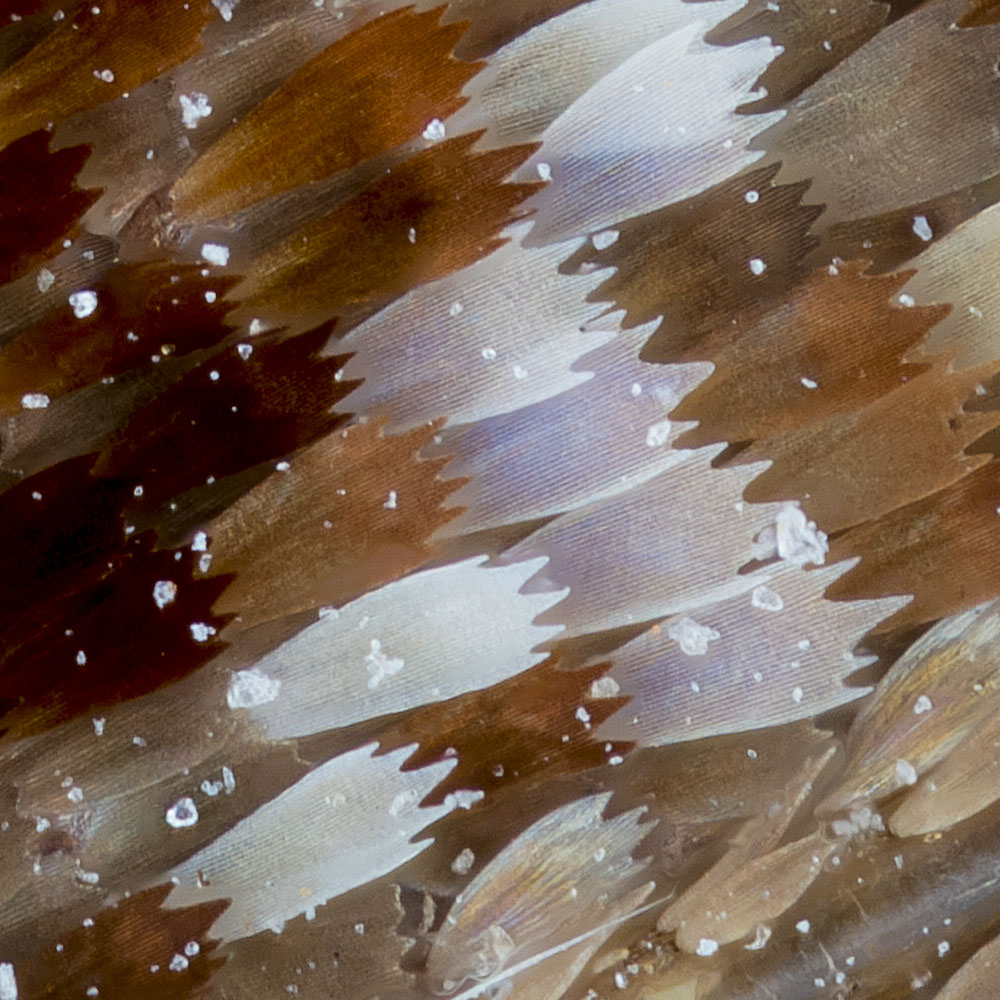 I think this is a stunningly economical way to get gigantic hi res images without stitching.

2. The batteries are rated at about 350 shots. This probably assumes use of the regular shutter, and motion stabilizer, and assumes that each shot is written onto the card. Shooting in hi res mode is much less battery-intensive. My 50 steps used 400 shots and I still have lots of battery power to spare. But a deep stack of 500 steps would use 4000 shots, which means the battery will have to be changed often during the stack. A solution is to strip the insides out of a battery and wire the contacts to an external battery which can be changed without touching the camera. Alternately, the E5MII, but not the PEN F, has an optional grip and external power supply which solves this problem.

3. This takes time, if you use flash. Too short an interval between shots and the flashes will go into heat shut-down. For these tests I allowed 4 seconds between each sensor-shift shot (eight of these shots are taken at each stacking step) using two Yongnuo flashes at 1/128 power, triggered by an Oly FL300R at 1/64 power (its lowest setting) on the camera. There were no problems and I could probably have used less down time.

But this method really shines in continuous light, since there is no shutter at all and no mirror either.
Lou Jost
www.ecomingafoundation.wordpress.com
www.loujost.com
Top

There was one curious problem with the PMax outputs, though. Near the corners, each point highlight (but not big spread-out highlights that were just as bright) had a linear streak crossing them, pointing towards the center of the image. They also have a similar linear streak perpendicular to the axial streak. I guess this is coma? The weird thing is that the perpendicular streaks aren't visible in the original shots but are very conspicuous in the stacked output.

Here is an example from the PMax output: 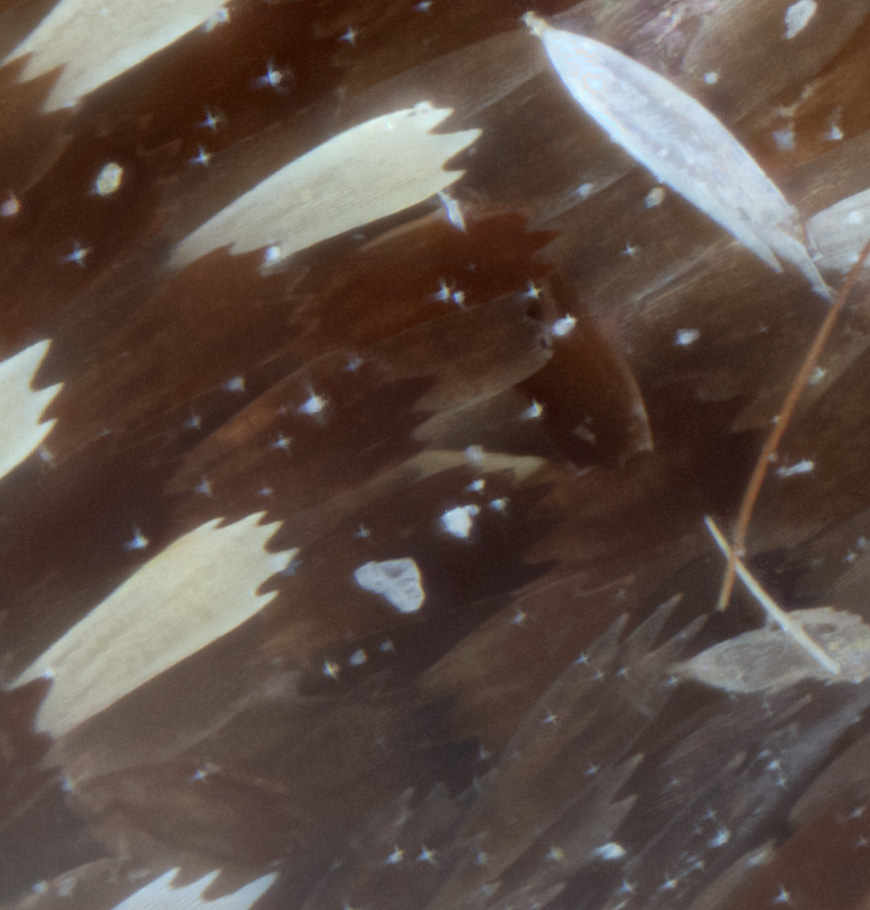 OK, now imagine that we have some lens that can fill a full frame and that has this same level of resolution. Then if we could move this PEN F around in the image circle, we could make a 200Mp+ image (since a full frame image is four times the size of the PEN-F sensor. This could be easily accomplished by using the Fotodiox Nikon to Micro 4/3 shift adapter. We could run a stack with the sensor shifted to the lower left, then shift the sensor to the lower right and run the stack again with the same settings, and repeat for the other two quarters. These should be easy to stitch since they are using exactly the same aerial image.

Though I think I need to read it again

The "crosses" look like the sort of thing you get in compound eyes.
Chris R
Top

Lou Jost wrote:There was one curious problem with the PMax outputs, though. Near the corners, each point highlight (but not big spread-out highlights that were just as bright) had a linear streak crossing them, pointing towards the center of the image. They also have a similar linear streak perpendicular to the axial streak. I guess this is coma? The weird thing is that the perpendicular streaks aren't visible in the original shots but are very conspicuous in the stacked output.

This "cross" artifact is a classic result of PMax combined with astigmatism. The two perpendicular streaks -- one radial and one tangential -- should be visible a few frames apart in the source images. PMax just puts them together to form the cross.

Rik, do you think stopping down the f/1.8 tube lens a bit would reduce it?
Lou Jost
www.ecomingafoundation.wordpress.com
www.loujost.com
Top

Chris, thanks for that interesting thread link. There are so many surprising complications in this kind of photography! Without this forum I would have been very discouraged, but seeing the ingenuity of many of these solutions is inspiring!
Lou Jost
www.ecomingafoundation.wordpress.com
www.loujost.com
Top

I think that is coma aberration. In fact it's only present at the corners, not at all the image like in the linked thread. The stacking method can exaggerate it but it's not the primary cause.
Pau
Top

Pau, Rik, Chris, thanks for weighing in on this.

What to do about it? I don't think it is caused by aberrations in my Mitu objective, since I've never seen it in my earlier work, only with these new lenses. I can try to minimize it by stopping down the tube lens. At these relatively low magnifications, maybe this won't cause much diffraction. Any recommendations for what is the smallest f-stop (on the tube lens) before diffraction sets in on a 20 Mp 4/3 sensor? Would an iris between the objective and tube lens help reduce the coma/astigmatism of the tube lens?

I've only ever seen, or heard of, closure of the aperture in a camera lens as a tube lens causing vignetting, not behaving like an aperture in the normal way.
If you add an iris behind the objective, it does have an effect of stopping the objective down. Its (mal)positioning probably introduces aberrations as well but since one is normally doing it for extra depth of field, not sharpness, I don't remember seeing or hearing of that.

Quick sums show you're already nudging diffraction, but it's worth a try.
Chris R
Top

If aberration is due to the "tube" lens, positioning the objective closer to it if doable could help because you will use only the center of the lens. But I think that the best approach will be to use a 100mm lens.
Pau
Top

Pau, the objective was as close as possible to the lens front element. Since then, I tried with an iris inserted, and this of course greatly increased the distance between them. The iris seemed to help rather than hurt. But not much. It also caused vignetting, which oddly disappeared when the iris was closed slightly.

Olympus doesn't make a 100mm micro 4/3 prime lens. I can use my normal Nikon tube lens set-ups but this Olympus lens is so excellent in normal shooting that I had high hopes for it as a tube lens.
Lou Jost
www.ecomingafoundation.wordpress.com
www.loujost.com
Top

I think that is coma aberration. In fact it's only present at the corners, not at all the image like in the linked thread.

I'm still thinking astigmatism, not coma. Coma would be visible in the source frames, and Lou says the crosses are not visible there.

It is typical for lenses to be astigmatic only away from center. In the linked thread, crosses are evident everywhere, even near image center, because the astigmatism is present in the subject, not the imaging lenses. Every ommatidium is not quite spherical, hence the reflected highlight is extended in perpendicular directions depending on focus, but not depending on where they are in the frame.


The stacking method can exaggerate it but it's not the primary cause.


Lou Jost wrote:The iris seemed to help rather than hurt. But not much. It also caused vignetting, which oddly disappeared when the iris was closed slightly.

Vignetting is caused by two apertures fighting with each other. You can think of the vignette as a sort of ring-shaped shadow in which darkening corresponds to the penumbra. Stopping down the iris makes the penumbra get narrower, which makes the unshadowed center of the image get larger -- apparently large enough to cover the whole frame in your case.

Rik, thanks for the clarification. I'm sure that you're right.
Pau
Top
Post Reply Previous topicNext topic
16 posts