Hello Chris,
Nearly, it is Biolam with conversion electrons only :-)
BR, Adi
Top

Try this technique by Rik to measure the backlash: http://www.photomacrography.net/forum/v ... hp?t=11519
Top

“Even if there's no gap between the gears, I'd still expect there still to be a measurable elasticity, depending on the force and number of gears, on change of direction.”

Yes, for sure but it is too small for me. I don’t have the equipment in order to measure something in NANO-meters

If Riks calculations are correct, then 1.7um should be easy to see when plotting. While I am sure the resolution of the rig is very fine, its accuracy is likely to be much lower. So there will always be some information to be discovered.

I have meant to plot the planetary gear box + stepper combo I have, but have been delayed on doing photographic stuff for the past couple months. Maybe you can beat me to it

Hello Elf, hello Steven,
Let’s assume that I would try to detect the backlash in the optical way.
So, I would take a couple of photos with different size of the steps
but how could I compare the pictures?
Can you recommend me the appropriate algorithm?
Thank you in advance.
BR, Adi
Top

Adalbert wrote:So, I would take a couple of photos with different size of the steps
but how could I compare the pictures?
Can you recommend me the appropriate algorithm?

I think you have the wrong idea. To take an accurate measurement, the trick is to shoot from the side, so that what is normally movement in the focus direction turns into movement across the frame. Then you can use the "alignment" function of focus stacking software to measure the amount of movement across the frame. All this is described in detail at the links given by elf and Steven.

And yes, a movement of 1.7 microns should be very easy to see. At the indicated link, I was working with steps of .0625 microns.

Hello Rik,
That is clear but I only wanted to implement this rule in my rail-software :-)
OK, then I will try with Zerene to measure my 2 nano-step.
BTW, do you have any detailed description of the console-log?
BR, Adi
Top

Adalbert wrote:BTW, do you have any detailed description of the console-log?

The postings previously linked should tell everything you need to know. If you have questions after trying, ask then.

Hi Rik,
I have already tried your method and may ask you some questions :-)
Would you take a look at the list below and check, which point should be corrected?
1.) Paper with the millimeter-grid is printed with a laser-printer [OK?]
2.) My rail is moved horizontally, so the XOffset should be taken [OK ?]
3.) The theoretical length of the steps is already known; so I will not start with the smallest one (2nm) but with 140nm (for the aperture 1.4) and then compare with the result [OK?]
4.) The 40x achromatic lens is used, so the calculation should be close to yours [OK?]
5.) A full-frame camera with 20MP is used, what should I take (frame-length or pixel-size) [OK?]
6.) And the calculation rule is ?


And finally the theoretical (calculated) step-size can be compared with the size measured empirically.

What about the unit of the XOffset in console-log ? (milli/micro/nano- meter, or pixel ?)

3.) the theoretical length of the steps is already known, so I can/should start with e.g. the smallest one and then compare with the result [OK?]

For that question, I had prepared this answer:
Assuming that "smallest" means a full step of the motor, that should work OK. But using 2 or 4 full steps of the motor per frame would save some time and probably give information that is equally good or even better.

3.) The theoretical length of the steps is already known; so I will not start with the smallest one (2nm) but with 140nm (for the aperture 1.4) and then compare with the result [OK?]

For that, the answer is similar. Apparently your "smallest one" means 1 microstep with 16:1 microstepping, and 140 nm will be something like 4.4 full steps (4 full steps plus 6 microsteps). Yes, that value would work well.

Stepping through the analysis... I calculate that one full step of your motor gives (635/100)/200 = 0.03175 microns movement of the carriage. With 40X magnification, that turns into 1.27 microns in the image plane, which is about 0.2 pixels with your camera. That amount of shift can be measured by Zerene Stacker, but the numbers would be more accurate if the shift were larger. Using 2 or 4 full steps per frame would give 0.4 or 0.8 pixels of shift per frame, which should work fine. Your suggested value of 140 nm will give a pixel shift of ((0.140*40)/6.6) = 0.85 pixels, which should work well.

When the carriage movement is graphed, what I would expect to see is a graph like this: \_/ , where the carriage moves forward for a while, then stops while the motor reverses and rotates far enough to remove backlash in the gear train, then starts moving again in the opposite direction.

Hello everyone,
Unfortunately my first test of the measuring of the step-size with Zerene has failed 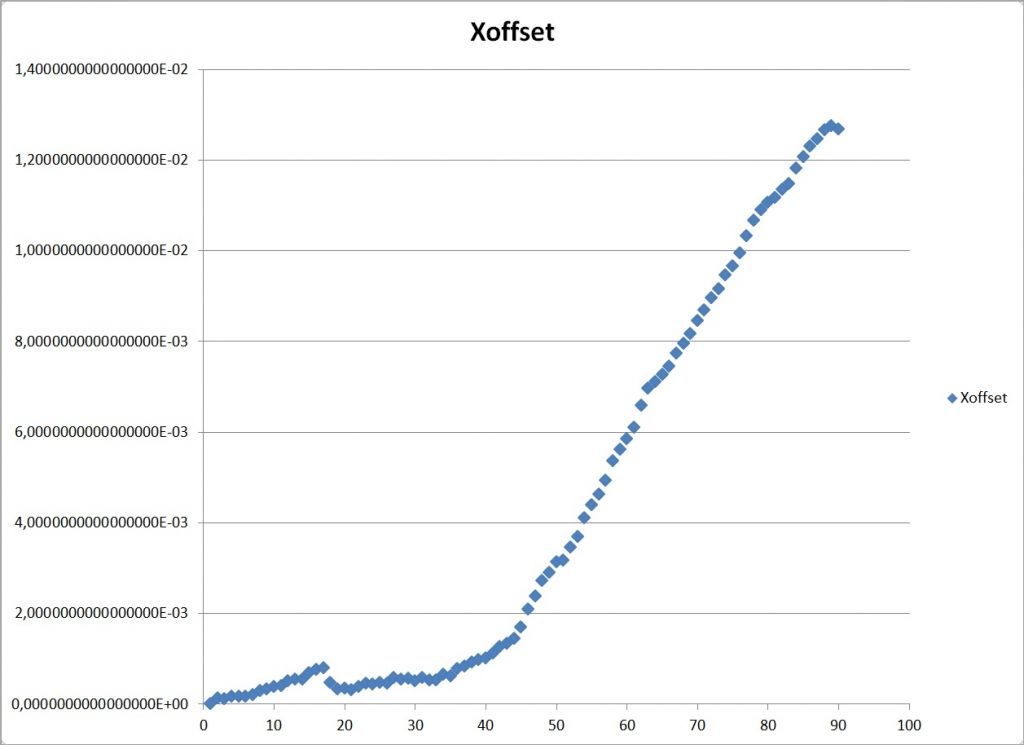 The values of the offset used in this graph have not been calculated.
So, there are the original-values from the console-log (only decimal point has been replaced by comma, because of excel).

The rail has been moved forwards 45 times by 140nm and then backwards (hopefully).

Probable the object has not been focused or illuminated optimally. 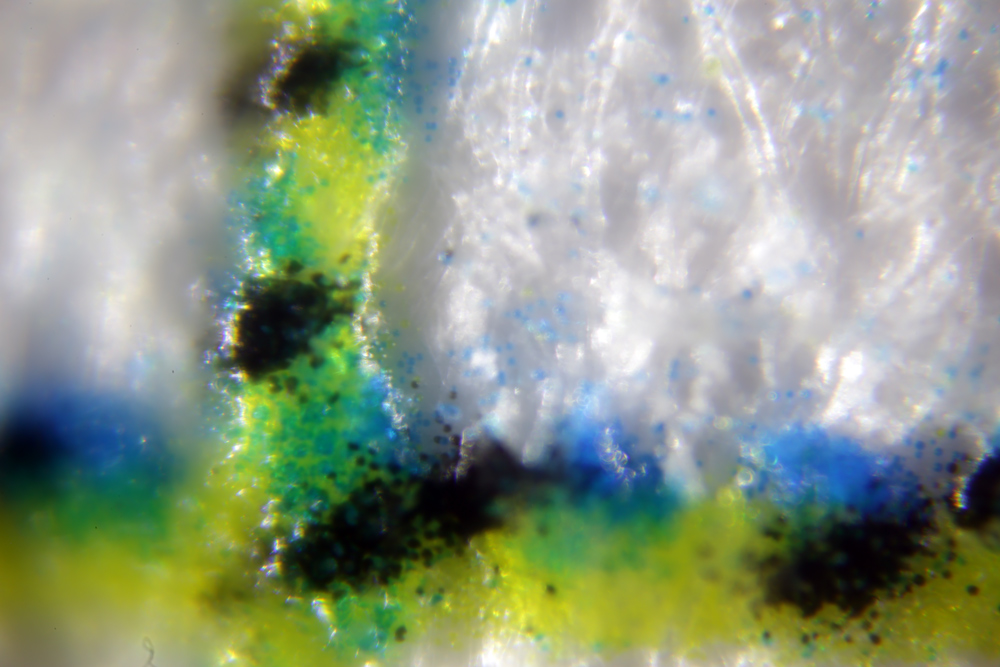 And in the meantime I will check my test-procedure if the changing of the direction has been coded correctly :-)

Thank you for showing us these results.

I disagree with your assessment. I think your test has probably worked quite well, and what it has shown is that your device did not move in the way that was predicted.

I expect that you are surprised and frustrated by this graph, but in my experience what you are showing is a completely typical first result.


Probable the object has not been focused or illuminated optimally.

It is a problem if the target goes completely out of focus anywhere in the sequence.

But as long as any significant parts of the target are in focus, the alignment process can usually track the movement pretty accurately.

The sample you show looks fine, and the second half of the movement curve looks like what I would expect from a gear-driven system. The obvious challenge is to figure out why the first half of the curve is so nearly flat. If the target images look similar in that part of the sequence to how they look in the second half, then I don't think target focusing or illumination is the cause of that flat graph.

Go back for a moment and consider how the prediction was made.

The predicted backlash of 1.7 microns was based solely on rotational backlash within the planetary gear system.

But there are other opportunities for backlash in the overall rail system, which will add to the 1.7 microns and may even be much larger than that value.

What I suspect happened with this first test is that before shooting the sequence, your last big move had been in the direction shown in the graph as "upwards". Then when shooting the sequence, your initial set of 45 movements in the other direction turned out to not be enough to remove all sources of backlash, so the rail never actually made the first part of that \_/ pattern that we expected to see.

From here, what I suggest is to increase your step size and repeat the test until you have a better feel for how large the dead region is. The current graph suggests that it is at least 45 steps at 0.14 microns, so I'd probably bump up by a factor of 10 (to 1.4 microns) and repeat the test.

When changing step size in this sort of test, it's a good idea to consider whether optical magnification also needs to be changed, in order to keep the total image shift under 20% but still large enough to be measured well. In this case, I calculate that you'll still be OK at 1.4 microns and 40X, but if you wanted to go to even larger step sizes, then a lower magnification might be appropriate.

Hi Rik,
Thank you for your comments!
As far as I can see on the graph I have changed the step-size instead of the direction

And I will repeat this test any way.
BTW, have you already tried to detect the resolution of the lenses by this method?
If yes, which way would be the best one?
BR, Adi
Top

Ah, well, yes, arbitrarily strange results can be explained if the test was not done correctly. Having changed the step size certainly would explain why the amount of shift per step in the well-behaved second section is about twice what it should be. (0.14 microns per step times 45 steps = 6.3 microns movement of the stage, times 40X = 252 microns of the image, divided by 36 mm across the image = 0.007 maximum expected shift, versus the 0.013 maximum shift shown in your graph.)

BTW, have you already tried to detect the resolution of the lenses by this method?

I do not understand the question. Please describe in more words what you mean by "resolution of the lenses".

Hello Rik,
If you knew the step-size you would be able to detect the magnification of an unknown optical-system. This is clear, isn’t it?
But I would like to determine something else. Probably you know the expensive test 3000 of Zeiss.
Using your method you could “simulate” this very fine raster. So, you only would need the information about the sharpness (maybe from Zerene ?).
And finally you would be able to measure the resolution of the optical-systems (in line pairs pro mm).
Could Zerene deliver the information needed for this approach?
BR, Adi
Top

Hello Rik,
For my second quick test I have chosen the step-size 10µm, 5 steps forwards and 5 steps backwards.
This time I have checked before if the direction of rotation is switched as required :-)

As far as I can see the size of the steps depends on the direction?!
BR, Adi
Top
Post Reply Previous topicNext topic
84 posts