Hope this is the right place, I am currently using an M1 + 60mm macro for stacking and would like to hear from anyone else using the system. Posted a couple of pics in the galleries to start the ball rolling and to give others an idea of what this camera can do.

The main advantage of the M1 for macro work is up to 999 shot automatic capture using lens focus adjustment. This removes the need for manual focus adjustment or moving the camera towards the subject. Capture is around 10 frames per second using the electronic shutter so a large stack can be created in a fraction of the time compared to the other methods.

The auto bracket function can only be used with the 12-40mm Pro, 40-150mm Pro and 60mm macro lenses and only with the M1 body. There is another stacking feature that collects 10(?) frames by shifting focus and then assembles these in camera to produce a stacked image. This can be useful for capturing wildlife in the field that is prone to movement.

Both options allow the focus step to be adjusted to ensure there are no bad overlaps in dof. At present I do not fully understand how to calculate the dof for any given step number so sticking with "1" for the time being.

Initial results are very encouraging but I need to sort out lighting and tame it down.

Oh yes, the M1 is also a superb camera and weighs half as much as the NIkon. 5 axis stabilisation allows me to hand hold the 40-150 (80-300) down to about 1/10 second. Not a cheap system, around £3k with the Pro lenses but a very worthwhile replacement for the Nikon. 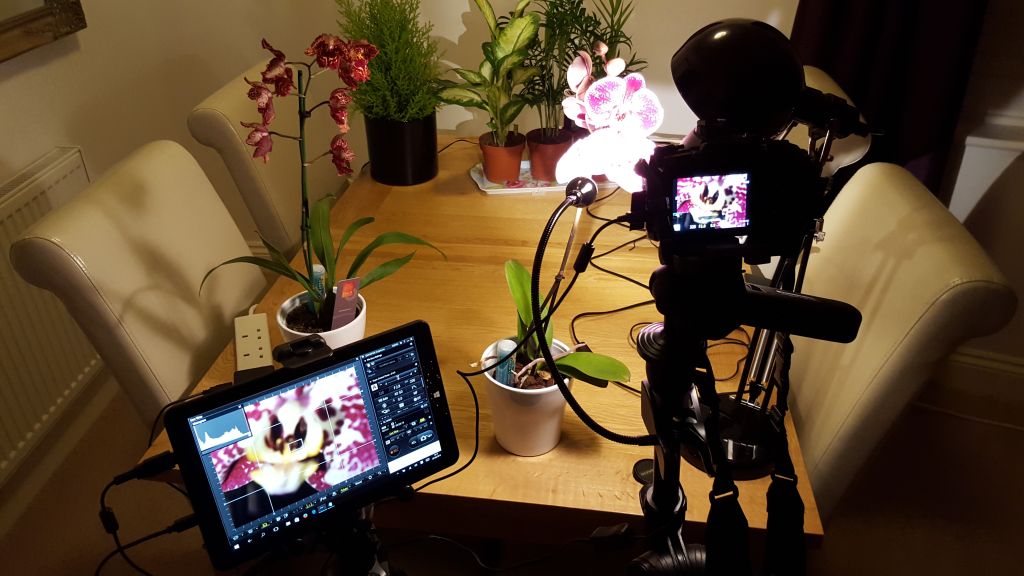 Focus bracketing is also available on the M5 mk II. The M5 does not have in camera stack processing.
This is all very exciting!

Did you experiment (yet) with fewer images than 200.

Have you tried a diopter on the 60/2.8 Olympus makes one that should fit. It would be interesting to compare with the Raynox close-ups
Top

As from Part 1 I will be interested to learn how Teleconverter MC 14 plays with the 60mm Macro.

As from Part 1 I will be interested to learn how Teleconverter MC 14 plays with the 60mm Macro.

It is not listed as being compatible on the Olympus web pages. In this day and age I would expect that if they could be plugged together, you might get a scolding error message

But maybe it would allow you to proceed after telling you that you were doing something sub optimal. Silly humans!

I'll also be interested in hearing whether or not the 60mm macro lens is compatible with the MC-14 teleconverter, but would advise great caution in making this experiment. As can be seen here, this teleconverter has a lens tube that protrudes a considerable distance into any lens mounted on it. No doubt the two lenses Panasonic lists as compatible--the 40-150mm F2.8 PRO and 300mm F4 IS PRO--have rear elements recessed by more than the length of the teleconverter's protrusion.

But since the 60mm macro is conspicuously absent from this short list, you probably want to measure very carefully the distance from its rear element to the lens mount, to make sure the teleconverter won't scratch the glass.

Chris S. wrote:But since the 60mm macro is conspicuously absent from this short list, you probably want to measure very carefully the distance from its rear element to the lens mount, to make sure the teleconverter won't scratch the glass.--Chris

Quite right, they will not fit but it is the adaptor construction that is the problem. Not an issue for me as I don't need more than 1:1

Found this extension tube set on Amazon, at this price it is worth a trial so will order one today:

"Strengths:
Designed to allow an objective to focus more approximation that focalization minimum distance from its normal set. Getting closer has the effect of magnifying your subject (making it appear larger in the viewfinder and in your pictures). They are particularly useful for macro photography, allowing you to convert almost any lens into a macro lens, while maintaining the original optical quality.
The extension tubes have no optics. They are mounted between the body of the camera and lens to create more distance between the lens and the film plane. By moving the lens farther from the film or camera sensor, the lens is forced to focus close closer than normal.
It comes as a set (10mm + 16mm), contains two different lengths of tubes 10mm / 16mm, and each tube can work only.
It is with electronic contact, which makes it to support auto focus, auto exposure, etc. It allows you to use all modes of shooting the camera, exposure compensation is required.
electronic contact is well constructed, the transmission signal smoothly."
Pat

Looks like the adaptor will work with the tube set as they provide a suitable recess for the lens protrusion. Any idea what the magnification would be with all 3 ?.
Pat

Not sure how to go from there with a tube and a tube plus a teleconverter.

But I am sure that those with the knowledge will be along to help me !!

I will have a stab.

I think that the 60mm macro derives 1.0x

But I understand that the TC and the Tubes eat light.

Looking to learn from here !! (and be put right no doubt)

The FL is 60mm, it doesn't really help to use the "equivalent" on a different format.
For calculation though you need to know what its FL is when it's focused to 1:1 - it's very possible that it "breathes", ie reduces its FL.

Putting the converter at the camera end of the tubes isn't something I've done for years but remember it as giving an effect about the same as multiplying the extension by the converter factor. I expect it depends on the spacings/thicknesses of the specific components.
Chris R
Top

dolmadis wrote:But I understand that the TC and the Tubes eat light.

Not really. What happens is that the higher magnification simply spreads the same light over a larger area, making it less bright at the sensor. With the TC there will be a small amount of transmission loss, maybe around 1/3 stop, due to reflection and absorption. But other than that the famous "loss of light" is not loss at all, just spreading the same light thinner due to the higher magnification.


ChrisR wrote:Putting the converter at the camera end of the tubes isn't something I've done for years but remember it as giving an effect about the same as multiplying the extension by the converter factor. I expect it depends on the spacings/thicknesses of the specific components.

I suspect that ChrisR wrote something a little different from what he intended, but to set this matter straight...

When the converter is mounted directly on the camera, its effect is simple: it just multiplies the magnification by the TC's rated value, compared to what the rest of the optics would give without the TC. This is using the TC exactly as it's designed to be used, and in this configuration it just makes the image bigger.

If you put the TC anywhere else, for example on the lens end of the tubes, then things get complicated and indeed the effect depends on spacings & thicknesses.

For macro I would be very pleased if we could just get rid of the idea that a TC multiplies focal length. But I think that's not going to happen because the idea works so well in other contexts.

Thanks to ChrisR and Rik for their input.

As readers will note earlier Pat (wayupnorth) is going to assess the combinations.