Kurt wrote:Thanks very much for all the input.
though, based on the last input, I changed the items list:

Thnaks,
this all helps!

I thought that the reversed Raynox would need around 220 mm to focus to infinity? Am I wrong or is there a special reason for this tube length?
Cheers,

and it came quickly from Germany, but this may be not the usual way because it says from China.
Pau
Top

and it came quickly from Germany, but this may be not the usual way because it says from China.

Kurt wrote:Thnaks,
this all helps!

I thought that the reversed Raynox would need around 220 mm to focus to infinity? Am I wrong or is there a special reason for this tube length?

Ideally it should be 1000/4.8 or 208mm for forward placement. I think there might be another adapter in the interface with the reversed Raynox, but I am at work and can't look at the lens now. I recall the front of the Raynox is 49mm and the back is 43mm threads. I did play around with the 7mm and 14mm 52mm tube sections to achieve infinite focus on the reversed Raynox. Achieving exactly 208mm is not critical I've found for either the forward or reversed Raynox. You should get both the 7mm and 14mm length 52mm tubes and see which works best with your setup.

Flocking inside tubes will help with contrast I found. Protostar was the material I used, it's very black from any angle. Do a search here and I wrote something on how to flock these tubes. It not easy to get this right once you get the paper backing off, it wants to stick to everything, but the technique I came up with makes it pretty easy.

Here's some old images of the lens assembly, and it looks like there is another adapter between the Raynox and the 52mm tubes. In this image it looks as if I was using the 14mm extension, as mentioned I did play around with 7 and 14mm length in this section of the lens but don't recall seeing much difference if any in image quality.

Good luck and keep us posted on your progress, 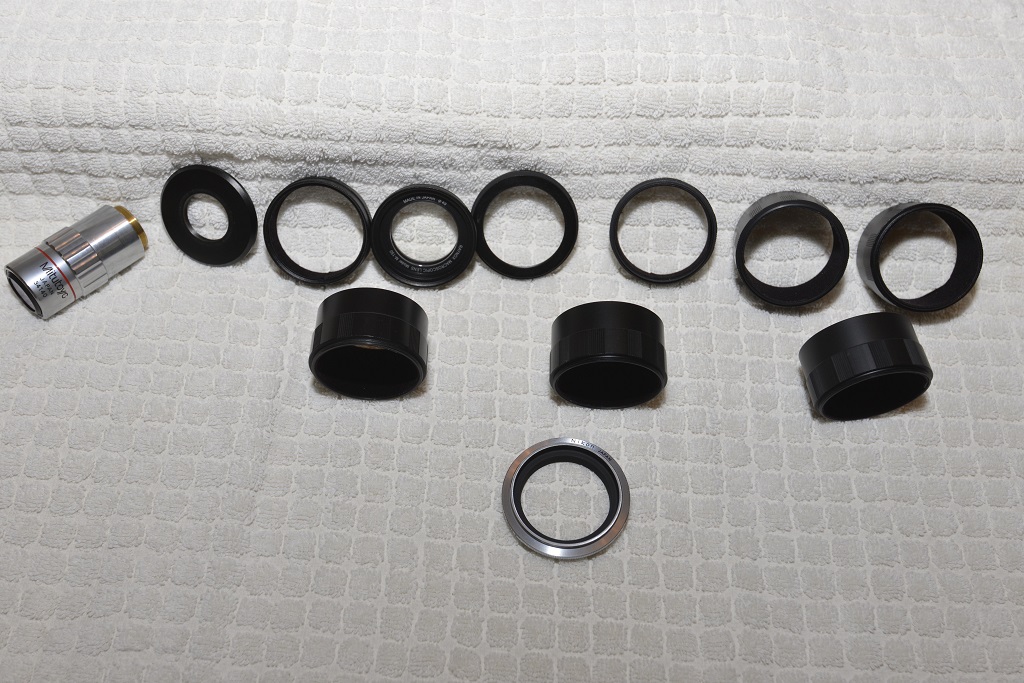 I found an old image at work of the Raynox 150 based tubes lens assembly, this shows the Raynox facing forward. 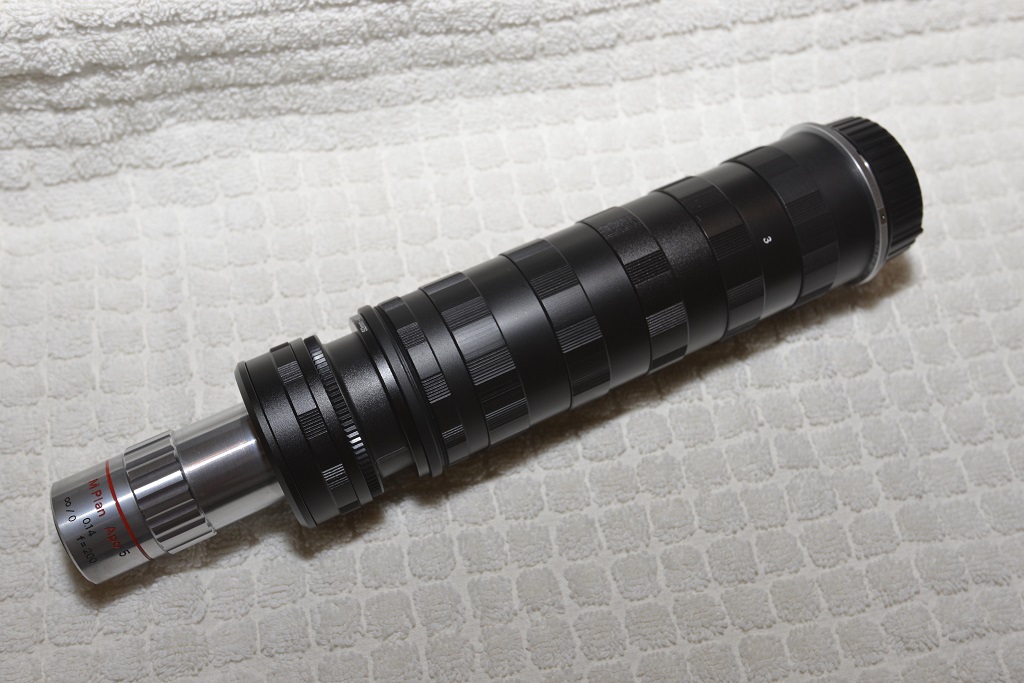 Must be different depending of the destination country: I still see Free International Shipping in mine and $1.99 shipping in your link, but if I change destination to USA mine shows $3 as you say
Pau
Top

sorry for entering so late, I haven´t seen your thread...

I build up exactly such a setup you want:

It was build by parts of the astronomy scene, in this case with 45mm inner diameter, and a couple of opto-mechanics I still had. I also use a Raynox DCR 150 reversed, which I build in one of the tubes. Connected is a FF DSLR from Canon. Some sample pics can be viewed here:

It´s the entire field of an FF-sensor and vignetting is not really a problem. All of them are captured with a 10x Mitutoyo Plan Apo.
But I don´t use a DSLR any longer, because I had some trouble with vibrations...

If you need some help in German, send me a PM...

...BTW, because you asked for: The exact metal back distance from the reversed DCR to the sensor is 120mm for the DCR250 and 205mm for the DCR150 (measured without the thread!).

Markus,
thanks for sharing!
This is a very interesting setup. Can you say some words / show some images how you achieved to build the DCR 150 into a 45 mm tube? Have you taken the Raynox apart for that?
Cheers,

no, it is not necessary to disassemble the Raynox. The outside diameter of the Raynox barrel is close to 45mm (around 44,8mm). I put the Raynox gently in a turning machine and remove the female thread to a outer diameter of 44,8mm. Than it fit tight into the aluminium tubes (I hate plastic on optics

). It´s only important to make sure, that the Raynox is not tilted in the tube, but that can easily be done with a small gauge block.
Once it´s adjusted, I lock it with 2 compound adhesive and the tube lens is born...

I will add some photos within the next few days...

A few days ago, a friend asked me about the Raynox, "Do you think it would be difficult to turn that knurled ring down to something just a bit smaller than 48.3mm?"

After looking carefully at my Raynox, I replied to him that "The front of the Raynox is a 49 mm filter thread. It appears to me that the very same thread is also what holds the retaining ring for all the optical elements. If the knurled ring gets machined down to 48.3 mm, I think the whole lens falls apart."

Your report indicates that my thought was not correct, so this evening I took a closer look at the lens.

First, here is what I saw that led me to think that the lens would fall apart: 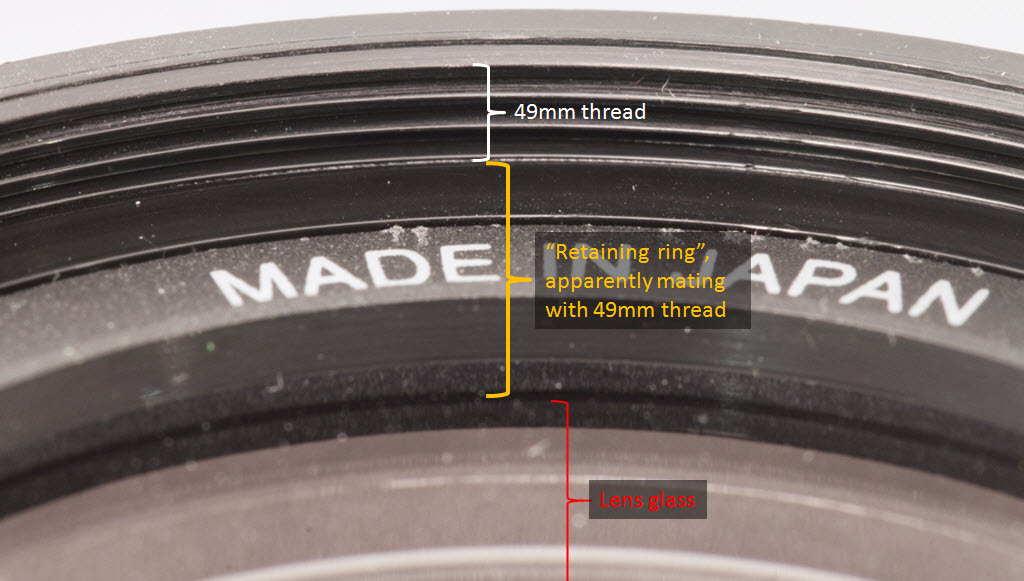 On closer examination, I discovered that the center part of that "retaining ring" is actually just a removable label, which covers some sort of spider assembly. With the label removed, it appears that the optics are glued into an inner module, which is then fastened by four ribs to a larger ring, which finally is screwed into the 49mm thread. 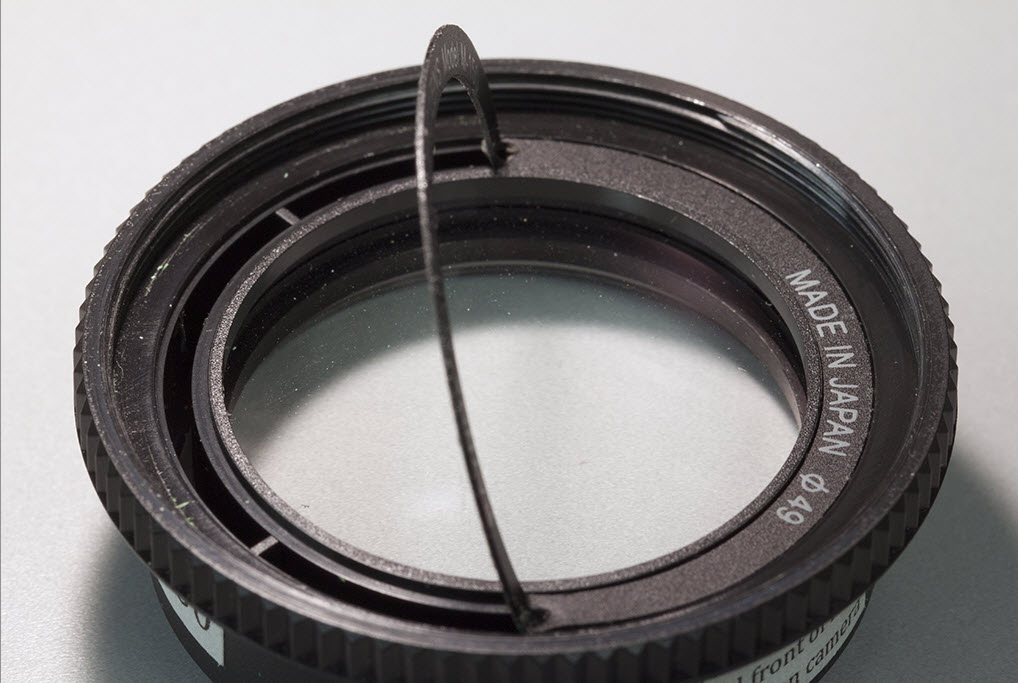 So, now I see that machining the barrel to ~48 mm will not cause the optics to fall apart. However, it will still destroy the thread that appears to be holding the optics module to the outer housing.

If so, did you get into the assembly far enough to determine what actually holds it together, since apparently the thread is not required?

Kurt, I apologize for being late to this discussion. I see that other people have answered most of your questions, but perhaps I can add some explanation.

My intention is to get the most out of the objectives as possible. Therefore I thought that the Raynox would be the way to go. If there's anything out there, which is better as a converging lens, I'm happy to take that into account.

The test results shown at http://www.photomacrography.net/forum/v ... hp?t=23898 were with the Raynox reversed and about 25 mm of separation between the objective and the Raynox.

That configuration is what I would characterize as "known good". That means it meets my personal criteria for acceptable image quality and I am pretty confident that other people can get the same results because all of the components can be purchased as new manufacture.

It does not mean that the configuration is known to be optimal for those components. Whether the Raynox is better reversed or normal is still an open question, as far as I'm concerned. To nail that down would require a careful series of experiments that would include varying the separation between objective and Raynox, in addition to testing with multiple objectives. It's conceivable that there could even turn out to be tradeoffs involving different aberrations, such that one evaluation would say "better reversed", and another would say "better forward". I have not seen any such comprehensive evaluation done, and I have no intention of taking time to do one myself. (I would, however, welcome other people's contributions on the topic.)

Likewise, "known good" does not mean that other components could not do even better.

I would be very surprised if the image quality of the Raynox could not be surpassed by some high quality view camera lens. Probably it can be surpassed by some high quality enlarging lenses, and perhaps also by some telephotos. (The difficulty with telephotos is to avoid vignetting with full frame. That's a perpetual problem that for some reason seems to be more severe with Nikon designs than some other brands. It's something about the entrance pupil placement. The lenses work great by themselves, but then you stick an objective in front and the two apertures fight with each other.)

In any case, I cannot point to a specific lens that is known to beat the Raynox for full frame, so we're back to that situation where I can describe the Raynox as "known good", and I can't describe anything else that way.

I hope this helps, somehow or other. 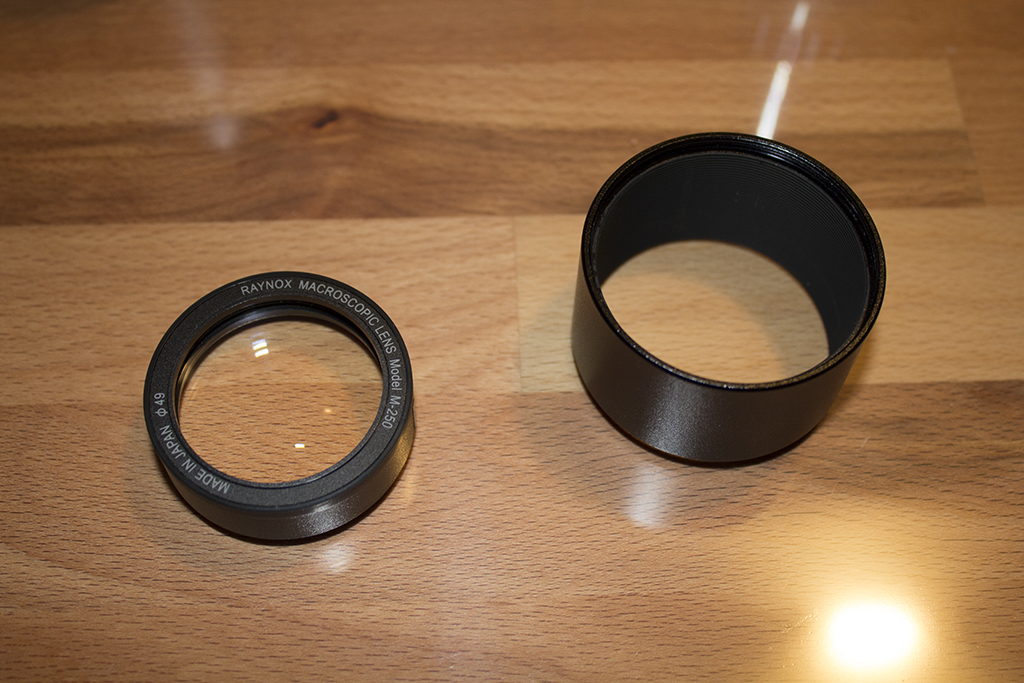 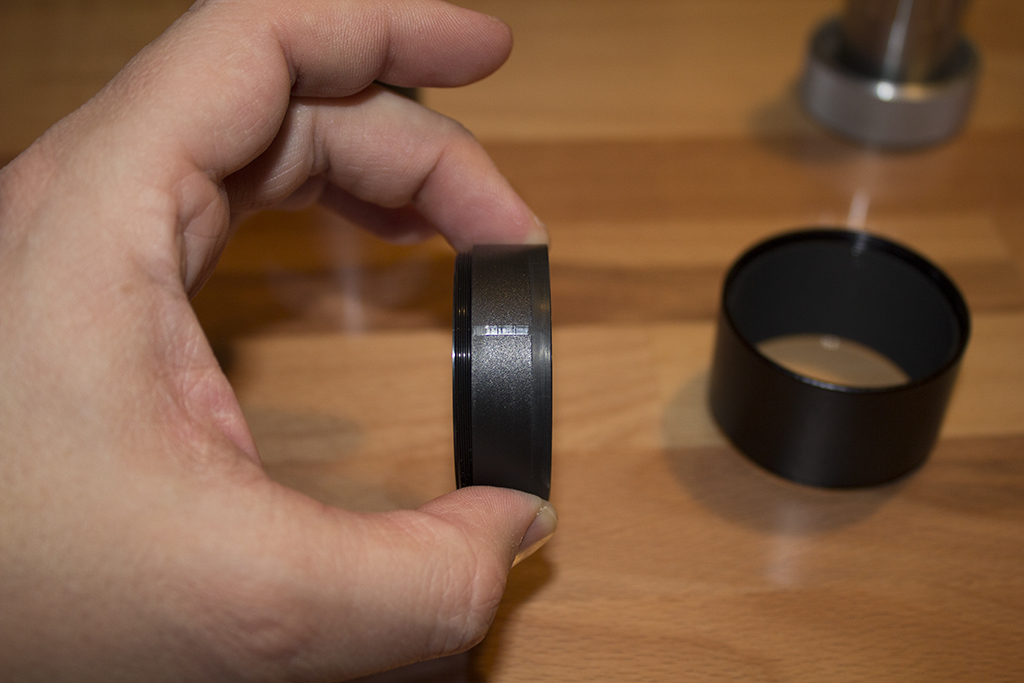 and one of the 2" tubes (M48 thread) with 45mm inner diameter in which I mount the Raynox.

Here you can see a reversed mounted Raynox 150 with a thread adapter M48 to T2 and a stop in front of the Raynox (objective side, made of self adhesive velours) with an inner diameter of ca. 30mm to avoid stray light caused by the lens rim in reversed mode (because it is not blackened): 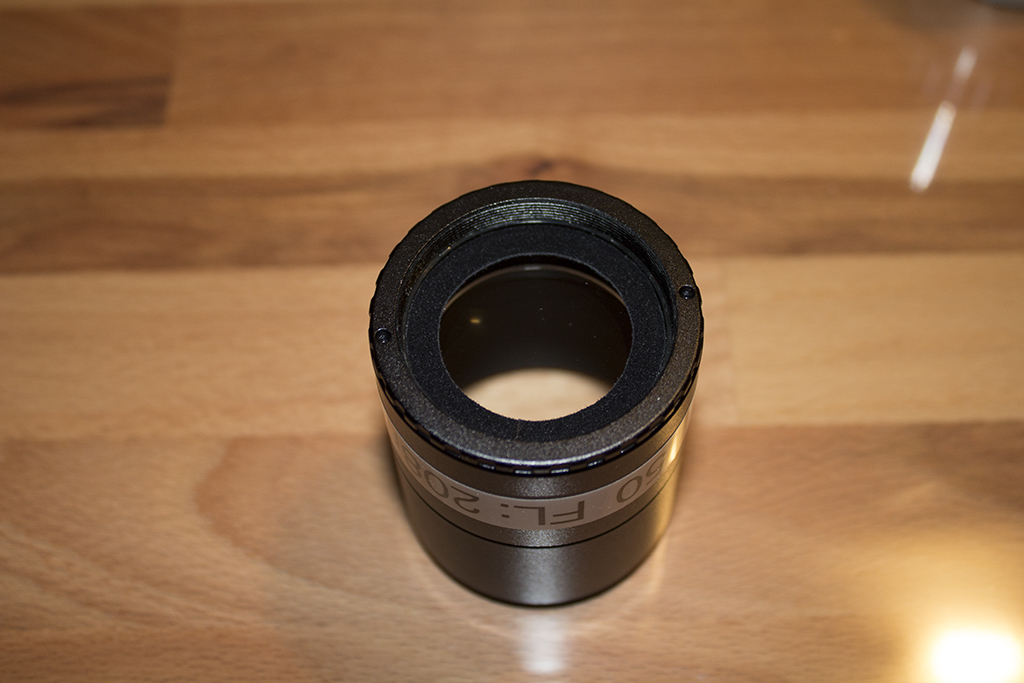 I don´t know for sure, how the lens cell is build, but I think (like you), that the lenses are hold by that four ribs ring, which is glued into the lens cell. Normally I hate plastic for build a lens cell, but at that price you can´t expect an other cell...

I'm sorry for my late reply. I think, I'll go for the DCR 150. I'll try to do the same as Markus and cut the outer part of the DCR 150 away.
I spend quite some time to get familiar with the thorlabs tubes. But what I don't get is, how a lens like a modified DCR 150 is placed into their tubes. There're so called retaining rings, but it seems that these are just there to hold ordinary lenses.
Is here anybody, how's more familiar with the thorlabs tubes?
Cheers,