It's well known that the Stackshot emits a fairly loud noise when in High Precision mode. Wouldn't that cause camera and lens vibration?

Edit: I meant the title of this thread to be "Does Stackshot noise (in high precision mode) cause camera vibration?"..I didn't realize there was a length limit. Sorry.
Last edited by Lou Jost on Fri Nov 13, 2015 5:33 am, edited 1 time in total.
Lou Jost
www.ecomingafoundation.wordpress.com
www.loujost.com
Top

Lou Jost wrote:It's well known that the Stackshot emits a fairly loud noise when in High Precision mode. Wouldn't that cause camera and lens vibration?

Clearly something is moving, but I'm not aware of anybody demonstrating a degraded image from the whine.

I just now assembled a 25X rig, consisting of a Canon T1i (15 megapixel APS-C sensor) with Mitutoyo 50X NA 0.55 objective mounted on a Canon 100 mm f/2.8 L rear lens mounted to the StackShot via its tripod ring. This was staring at a blowfly wing, continuously illuminated by an Ikea Jansjö lamp. I shot a series of 6 images, alternating High Precision on and off, with 1/8 second exposure time using EFSC. 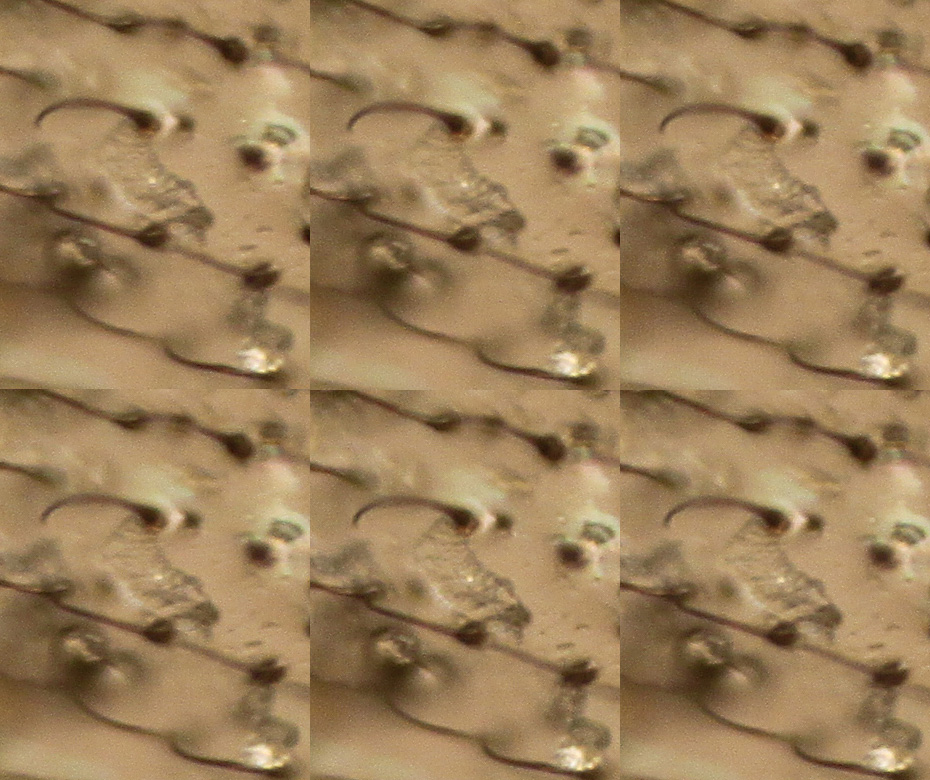 There's a bit of blurring due to environmental vibration, some frames worse than others. Ironically, and presumably by coincidence, the frame with the worst blur was with High Precision off, and the two sharpest of the bunch were with it on. Looking at the camera's LCD at maximum magnification in Live View, I couldn't see any difference between whine on and whine off.

I suppose the whine must be in some mode and at some frequency where it just doesn't couple effectively into the camera and lens assembly.

For context, here's the whole frame. Just under 1 mm across the frame. 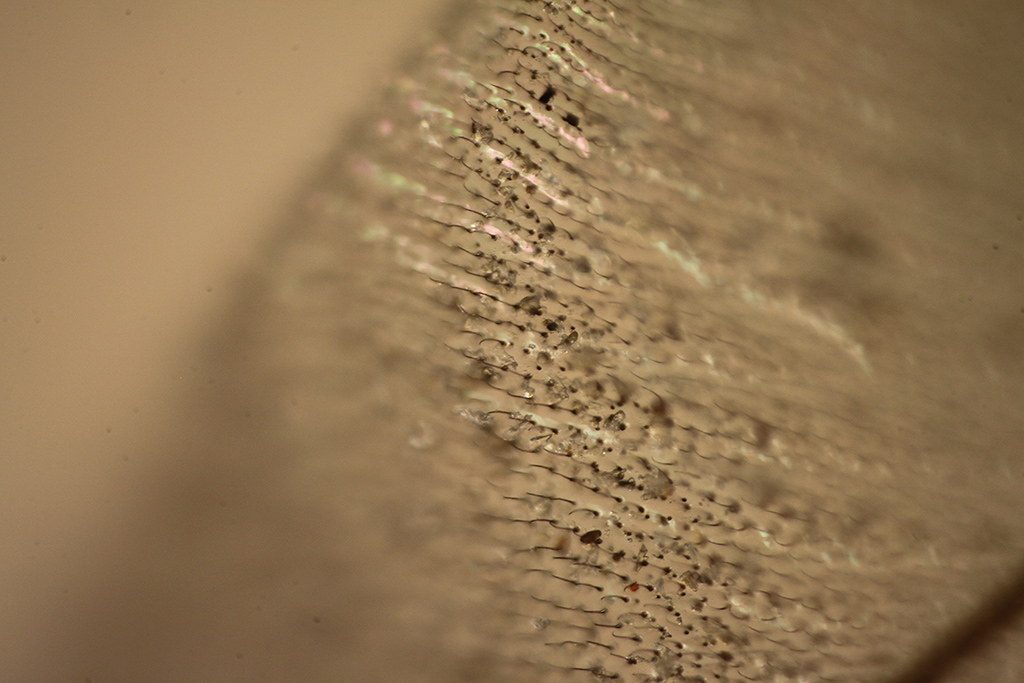 Rik, thanks for answering that question definitively. I guess I won't worry about it anymore. It is counter-intuitive to me that such a loud noise doesn't cause vibrations, but your test is convincing.
Lou Jost
www.ecomingafoundation.wordpress.com
www.loujost.com
Top

It's always possible that your StackShot or something else about your setup is different from mine, so that for you vibration could be a problem.

You might want to consider my info as just an illustration of one way to test, and see what yours does in similar circumstances.

If it's different from mine, that would be good information for everybody to know.

It may be important to test the exact system one uses for normal microphotography since, as you say, the resonant frequencies of the system are what determine the effect, and these will change unpredictably with every minor change in the system. Will give it a shot.
Lou Jost
www.ecomingafoundation.wordpress.com
www.loujost.com
Top

I would worry about a lot of other things first. That includes:
- air movement in room.
- Breathing of operator.
- stability of floor.
- stability of camera support when moving rig and changing center of gravity.
- Heat induced motion of specimen from illumination sources.

The whine is at a pretty high frequency (kHz), so I doubt you could get any significant resonance frequency on a camera set-up. The frequency also changes a bit with each step in the high precision mode, so it is not a constant factor.

dlg, those factors can be eliminated fairly easily. It is quite another matter if the main device holding the camera causes inherent vibration. Like a Trojan horse, it sits there in the heart of the set-up, invited by us innocents. We spend our time building vibration-proof supports, shutting off refrigerators, waiting for volcanos to get quiet, and then we bring this noisy thing into the sanctuary and put our camera right on top of it.

But Rik's tests show it is harmless, at least on some set-ups. Nevertheless resonances are very hard to predict and I believe it is something worth thinking about and testing for any new set-up.
Lou Jost
www.ecomingafoundation.wordpress.com
www.loujost.com
Top

Rik, can you show the procedure to connect a microscope objective to your 100mm and stackshot... Also you are using a Mitsumo,, can any other objective be used such as a 50x .7NA ? I do not know as a new forum member if this is the proper place to ask such a question but perhaps??
Top

Asking here is as good as any. Starting a new thread and linking back here would have been better, but that sort of thing requires knowing quite a bit about how to use BBCode formatting tags. (BTW, I edited your posting here to remove the unnecessary quotation of my entire post.)

In theory, a 50X NA 0.7 could be used in the same way, assuming that it's one of the modern infinity designs. However, the working distance of an objective with that spec would typically be so short as to be unmanageable. Also that spec normally goes along with requiring to be used with a cover glass, which at that large NA is very important to get right. The great things about the Mitutoyo 50X NA 0.55 are that 1) it's designed to be used without a cover glass, and 2) its working distance is 13 mm -- easy to work with.