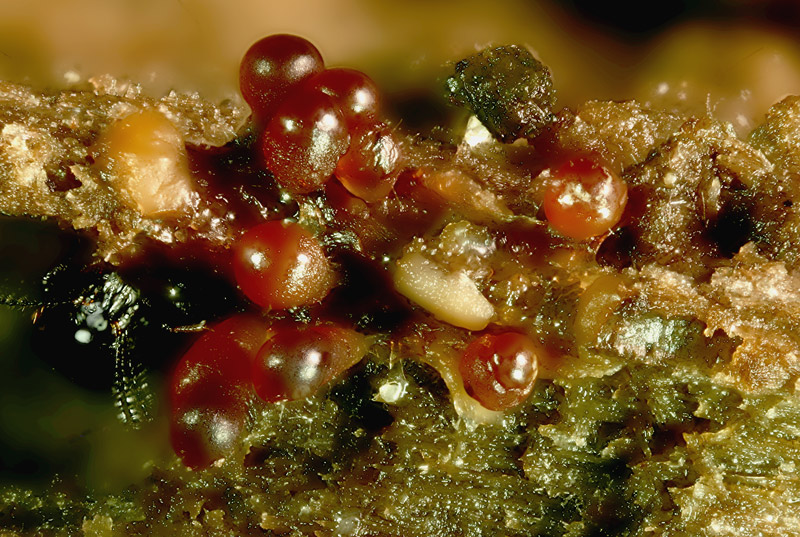 An agressive color change has taken place. Note that the hypothalllus remains. 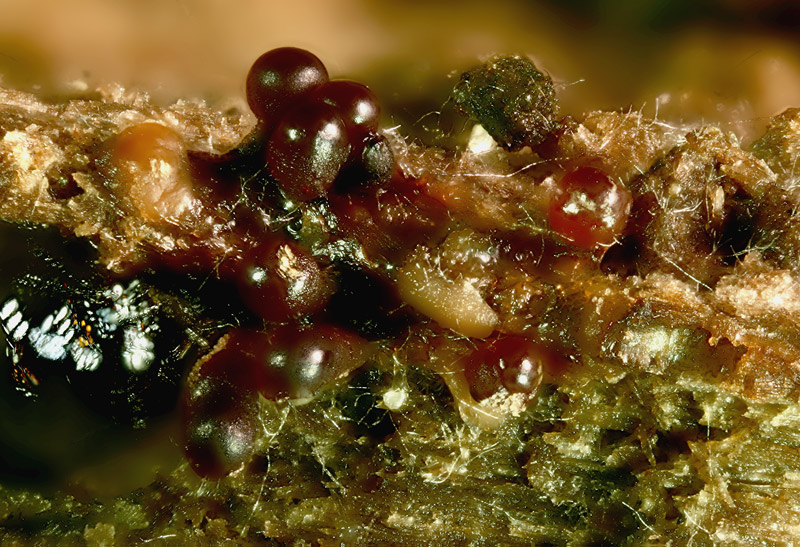 Continuing the series from the last post we find radical change in color and size as the drying of the substrate and the myxos themselves prepares them for an attempt at eventual spore formation and release.

I regret to say that a sixth image would have been pointless as the subjects began to degrade rapidly after image 5. At my present level of understanding I do not believe it will be possible to obtain a first emergence to spore release series by taking a sample from the field. Either the macro stage and lighting must be brought to the subject in the field or the subject must be willing to evolve entirely from a culture in the lab where the macro stage is always present.

Please disregard the disturbance in the lower left of both images 4 and 5. A small beetle entered the frame as the series was being made and not sitting still confused Combine ZM. I don’t know if Doug had anything to do with this incident.

Beetles get into everything, probably a Cryptic Slime Mold beetle at that. I was wondering what that was.

From what I have gathered here and there, growing slime molds in the laboratory is hit and miss at best. I have only been successful at keeping a plasmodium for a month or so before it too up and died, leaving no trace or else it has crawled into my sock and underware drawer, not sure...haven't felt or noticed anything unusal since its disappearance though.

About the most success you are going to have is with a plasmodium growing from germinating spores and fused amoebae. Even then you are going to need to autoclave some petri dishes and prepare a nutrient rich agar medium in which it can grow. Without autoclaving, fungi is going to ruin any attempts you might make in growing a plasmodium. Now that I think of it, your local Wal Mart or some dept. store may have a pressure cooker for a few bucks. Much cheaper than an autoclave of course but you will have to keep an eye on it, they are known for rupturing seals and blowing their contents all over the walls of the kitchen with much violence and danger to life and limb from sudden airborne parts and content.

However, people use them all the time and a pressure cooker would be sufficent for sterilization of culture dishes and such, just be careful with it. Oh yes, and another great set of images there Walt, supurb!

Excellent images Walt. They sort of remind me of the fruit cake you see at christmas time. I love the beetle in the first photo.
Take Nothing but Pictures--Leave Nothing but Footprints.
Doug Breda
Top
Post Reply Previous topicNext topic
3 posts • Page 1 of 1