I'm pretty new to macro photography, and I've come across a problem. I think I know what's causing it, but finding a solution is another matter!

My problem is that after processing a stack of images (in Zerene Stacker) I'm getting a lot of out of focus areas on my completed stack. I am sure it's because of the closeness of my lens to the subject, combined with the distance I'm travelling forward with the lens to focus through the image.

Here's just a few frames from a stack (there's about 60 in the original). There's been been no post processing done yet, so please ignore that:

And here's the finished stacked image, with just one of the (many!) problem areas highlighted.

As you can see, I'm not getting the bottom part of petal #1 in focus. The main reason (I think) is because petal 1 is a lot closer to the lens (which is about 7 inches away from the flower using a 105mm macro) and as I push the lens forward on my macro rail toward focussing in on petal 1, petal 2 gets larger and more out of focus in the frame, which obstructs the view of the bottom part of petal 1 one, hence the blur in the final stack.

I hope I explained that clearly enough. Is there a solution to this problem? I suspect getting the lens a lot further away from the flower will help some, but are there other ways around this?

You can use slabbing and retouching techniques in Zerene Stacker overcome some of this problem. Have you gone through the tutorials on the Zerene site?
Top

I tried slabbing, but that hardly made any improvement. I think my only options are to resign myself to a lot of retouching, and/or getting the lens further away from the subject.
Top

mikejb, hello. I'm the fellow who wrote Zerene Stacker and who answers all the email coming into support@zerenesystems.com .

I pulled the images you posted into ZS so that I could get a better feel for what's going on.

Distance to subject is important in some cases, but this doesn't appear to be one of them.

Instead, the problem here is much more fundamental. It's discussed in more depth at http://www.photomacrography.net/forum/v ... 557#102557, but the essence of the problem is contained in this snippet:

The problem is particularly bad when the foreground is bright and the background is dark. In that case, in areas of the dark background that lie near the bright foreground, when you're focused on the background most of the light is actually coming from the OOF foreground. This situation is illustrated at http://www.photomacrography.net/forum/v ... 042#135042, a little farther down in the same thread.

To show the problem, I've used Photoshop to make an overlay of your foreground & background images after they were aligned by ZS: 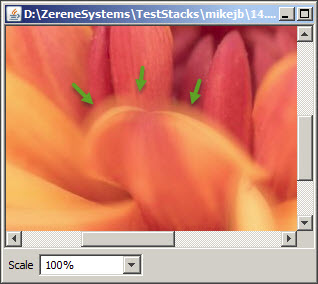 So in some sense you're stuck -- there's just no way to get a perfect image of this flower, short of physically removing the foreground as you step focus backward. The best that you can hope for with a software solution is to get some pleasant blend.

In that regard, the last image that you've shown looks awful. You've been left with a hard and irregular transition between a foreground image where the dark petals are shown in their correct colors but completely unfocused, and a background image where the dark petals are focused but contaminated near the transition. This appearance is typical of DMap, especially when the slider is pushed far left.

In cases like this, you will almost always find that the PMax stacking method gives a more pleasant transition than DMap. Here is a PMax output from the images that you posted:

Now PMax does good transitions, but as you've probably read or noticed, it also tends to alter color and contrasts and it accumulates noise. All of these can be a problem for flower photography.

As a result, you'll usually get the best result overall by using the retouching brush inside Zerene Stacker to merge PMax and DMap outputs, leaving the DMap result over most of the image but brushing in the better transitions from PMax. Areas that can benefit from retouching can be identified quickly by using the "s" key to flash between the DMap master and the PMax retouching source, as shown in the video tutorials about retouching.

Here's an animation that illustrates the flashing, again constructed from only the images that you posted.

So, is it a lot of retouching? Yes, sometimes it is. But with a bit of practice at using the tools, I think you'll find that it goes pretty fast. Use the "s" key for flash-to-compare, and review the other techniques for faster retouching that are described in the tutorial, Tips For Retouching.

One last point, getting back to distance from subject. At low magnification, such as I think you have here, it's usually better to focus "by ring" instead of "by rail". The reason for that is explained in yet another tutorial on the Zerene Stacker website, "Is it better to use a focus rail or the ring on my lens?"

Mike just nb that one thing that makes this effect worse is using a "nice large" aperture. That's because the hazy area spreads further across the rearward part of the subject. That means it's worth considering how big an output image you need, and how small a resulting aperture you can get away with before diffraction softens things too much.

It IS possible to take two or more stacks of the same subject at different apertures and use the best of the smaller aperture result to retouch the sharper, larger aperture result. At best it's fiddly, and at worst it's impossible. Something like a flower will move significantly if you run two consecutive stacks.
Top

Many thanks, Chris, and especially Rik. Thank you for making such an effort to explain things to me, I really appreciate it. I'll go away now and do some experimenting.