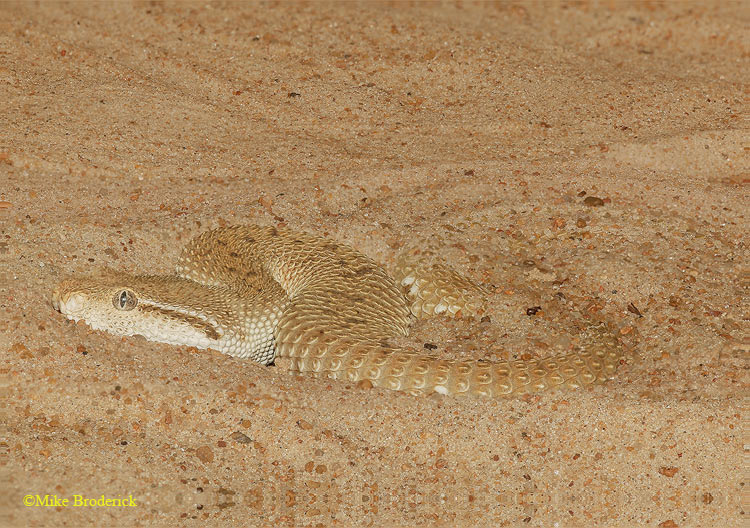 I went back to the zoo for a second try at stacking. This is the first shot that at least isn't embarrassing, though not a full success. This is a leafnose viper, stack of ten shots. Unfortunately some whim made me shoot this one at f/11, which wasn't enough (I'm not totally convinced f/16 would've been enough). There's a band of softness near the ridge at upper right, and some sort of weird artifact in a narrow band all the way across, just above the bottom of the shot (at about the same level as my copyright notice). There's a small blurry area in lower left that I think is probably a smudge on the glass that I overlooked, rather than a problem with software or stacking technique. I should have gone another shot or two focusing to the rear, since I didn't the upper part of the photo is soft. Since I know what happened here, this doesn't bother me so much--Arguably it even gives more the air of a conventional photo!

I'm going to have to take even more shots, possibly be more scientific about how I space the shots, and avoid f/11!

Lookin' good -- this is definite progress.

The funny band at the bottom appears to be CombineZ's standard border effect in which it "mirrors" 1/4 inch or so of image on all sides. Just keep an eye out for that and crop it off. I see the little section of blur that you're talking about at upper right, about 1/4 way down the image. It has a mate on the left 1/3 just a hair lower down. That probably represents a place where you stepped a bit farther than you should have. But if we weren't being very critical of an experiment, it would never be noticed. The blur at lower left, about 3/5 from your signature to the head, could be a smudge on the glass, or it could also be another long focus step, of no significance.

It's always good to shoot the full set of frames, but there's a lot to be said for stacking just the ones that show some portion of the subject in sharp focus. You'll end up with fuzzy foreground and background, but shoot, people expect that anyway and it concentrates attention on your subject.

If you think in terms of a graph -- blur versus distance -- what stacking does is to change a V-shaped curve into one that's more like \_/ -- that is, completely in focus for a considerable range of distance, followed by the same loss of focus with distance that you would ordinarily get starting from the single point of best focus. The trained eye will pick that up as a sharp transition from in-focus to out-of-focus, smile knowingly, and think "stacked".

The untrained eye won't notice it at all, or if they do, they'll probably just think "Wow, great DOF!".

The photo has a wonderful look of depth to it even though it lacks a lot of colors. The blur along the top edge adds to the depth IMO and gives the picture more of an angle like your in the pit almost eyelevel with the snake (which I like). The bottom edge I would just trim off and that would bring the snake a little closer to the bottom of the picture (right along where your name is). Helicon Focus likes to make blurry edges also.
Take Nothing but Pictures--Leave Nothing but Footprints.
Doug Breda
Top

Great virtually monochrome picture Mike showing it's camouflage yet revealing the snake enough for the viewer to see! From a compositional point of view I think you can crop some off the top anyway to leave around the same amount above the snake as below it.