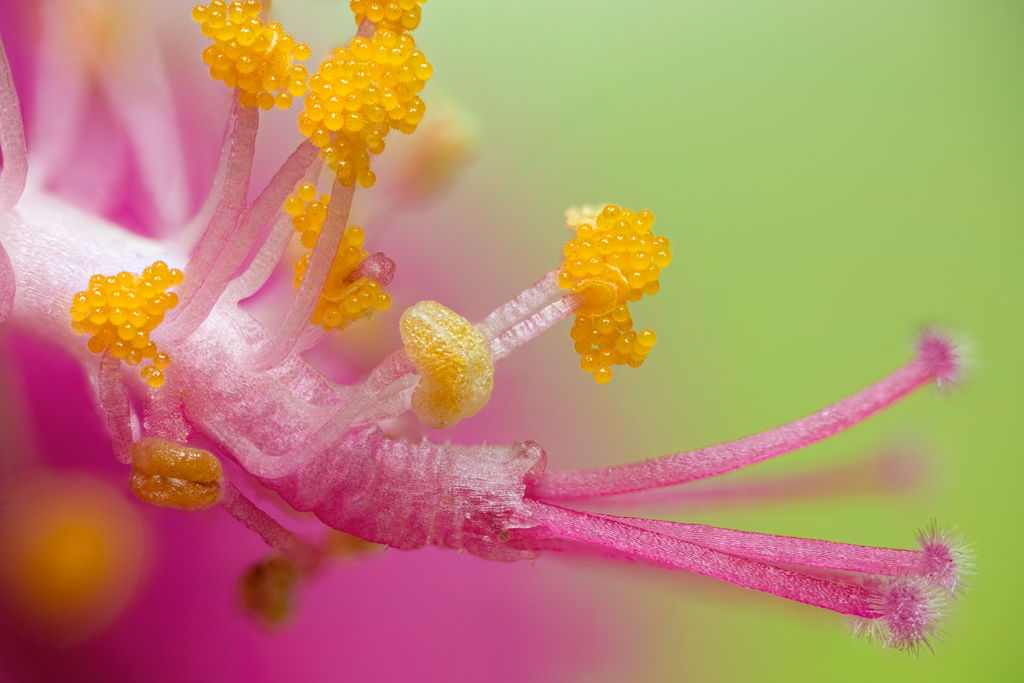 This is a lovely image. The colors are very pleasing. Thanks for posting!

QUESTION: was the flower cut? or did you photograph it alive?

I ask because I once failed at something very similar: the flower wilted, which ruined the final photo.
Top

Yes, good call. It seems all mallows are quick to droop. The stems and petals seem to droop faster than the reproductive structures. I cut it, walked about 50 steps to my studio, clamped it and shot it. Because I knew I was going to shoot at 4x I clamped it in there very tightly so it didn't wilt enough to make a difference for this stack.....but wilting wildflower blooms drive me crazy. Here is another Rock rose showing the pollen on the pistils. Also at 4x.

Oh, another bloom that wilts in seconds or just a few minutes.......Anacacho orchid tree bloom. 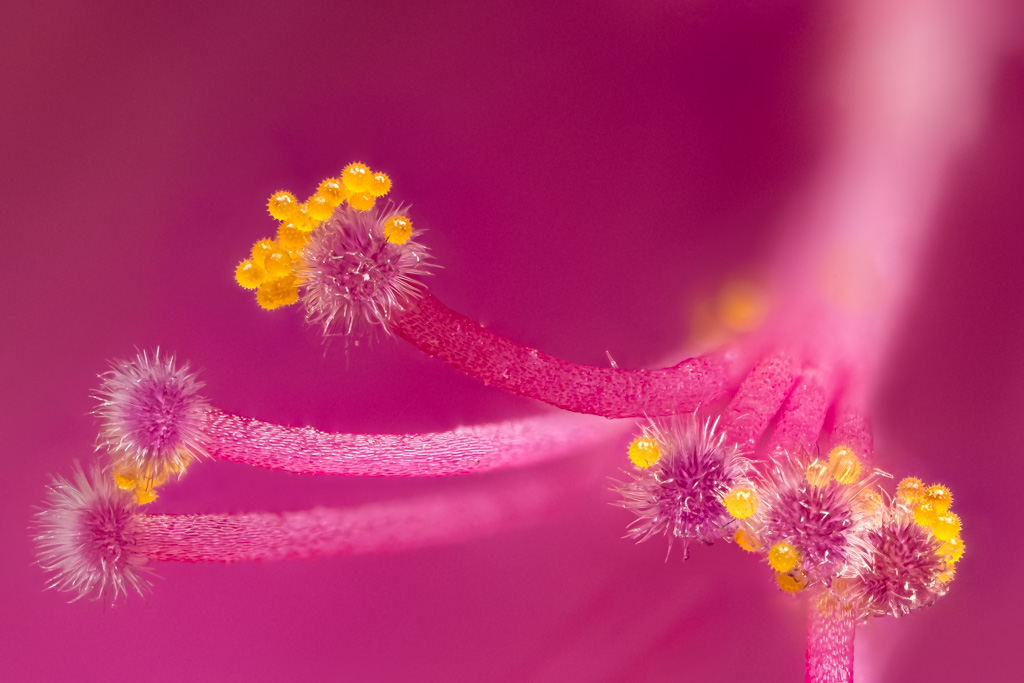 It appears as if the camera peered downward, into the flower.

You must be well organized! It occurs to me that perhaps a tiny thimball size vase may inhibit the wilting? would that help?

But perhaps the best situation to create a really deep stack without wilting might be if the flower were really alive and un-disturbed. Imagine it in a small flower pot gently carried to the studio, or perhaps set up the macro kit in a small greenhouse well protected from the wind. It may be worthwhile given beautiful results!
Top

Yes, all good points. Picking, wilting, shooting, wilting is a quick and easy approach but difficult for the flowers that wilt quickly. I have asked the experts at the Wildflower Center if I could do something to delay wilting - like tying a tourniquet around the step before cutting it....but they don't know. Bring the whole plant inside in a pot with soil is okay for small plants take from a place where this is permitted (like your own yard). Greenhouse would be great if you can control the air flow - it's like a giant shooting tent!

I usually do have a small vial of water they sit in when I shoot them but that doesn't help with the quick wilters. Something physiologically happens inside the plant when the stem is cut. Is it a change in pressure? Does the plant release chemicals or other signal molecules that triggers wilting? Hummm.

It certainly would be easier to shoot money bills on a copy stand, or dead and dry insects sitting on a pin. It has always been more challenging to take pictures of things that move - people, animals, insects and the slower movers - plants.
Top

The images are great! I especially like the combination of soft colors and crisp details, with subjects that I know are so small.

About the wilting, I think you're right about the pressure. When I used to raise insects on cut plants, one standard trick to prevent wilting was to seal an inflated water balloon around the cut stem. The extra pressure from the balloon seemed to be the critical difference. I have not tried this technique with flowers, but perhaps it's worth investigating?

I concur with you that to photograph a dead insect or inanimate object is less challenging. This is why I consider the above results not only beautiful, but meritorious!

One should direct the question of how to minimize wilting to a qualified specialist or corresponding expert -maybe a botanist? or biologist specialized in this type of thing?

The small vial sounds plausible: keen to learn other techniques, perhaps something disolved in the water to maintain its life-like aspect?

Rik: the balloon technique sounds interesting! Just to be clear, the stem is squeezed between balloons inflated with water? or inserted in a pressurized liquid? thank you!
Top

Carmen wrote:Rik: the balloon technique sounds interesting! Just to be clear, the stem is squeezed between balloons inflated with water? or inserted in a pressurized liquid? thank you!

Pressurized liquid. The stem is inserted into the water balloon, where the elasticity of the balloon maintains a slight pressure.

I was working mostly with woody material such as willow branches. With those, it was simple to seal the neck of the balloon around the stem with a rubber band. Well, conceptually simple anyway. As I recall, the procedure was pretty fiddly and could have benefited from an extra pair of hands. What I did was to inflate the balloon from a kitchen tap, then twist off the balloon somewhat below the neck to form a seal there, then fasten the now non-pressurized neck around the stem, then untwist the balloon so as to allow the pressurized water to reach the stem.

With more fragile non-woody material, some more gentle procedure would be required. At this moment, I am envisioning something involving a quick-setting adhesive that would seal the stem into the cap of a container that could then be pressurized.

Wow, Rik. You are the first person to suggest I'm not crazy to think it's a pressure thing. Seems logical.....now I'm going to get more serious about testing it. I'll try your water balloon idea, I'll try a string or rubber band tourniquet and anything else that might fool the plant in thinking it still has feet.

It does make sense that milkweed-like plants would wilt because when you cut them they bleed white rather quickly (like most alien blood does). If I can stop them from bleeding, like applying a tourniquet before cutting them......

I'll report back after I test a few things.
Top

Which objective? If it is an infinity type, isn't the magnification more like a bit over 2X? In any event, it appears to cover the full-frame format nicely.
http://www.krebsmicro.com
Top

leander wrote:I usually do have a small vial of water they sit in when I shoot them but that doesn't help with the quick wilters. Something physiologically happens inside the plant when the stem is cut. Is it a change in pressure? Does the plant release chemicals or other signal molecules that triggers wilting? Hummm.

The culprit is usually that air has gotten into the cut-off plant part's vascular system. The leaves can pull water up only so long as there is a solid column of liquid in their vascular tubes. When you cut the plant, you expose the tubes to air, and the damage is done.

To minimize this, I take a big paper cup full of water outside to where the plant is growing. I cut the portion I need with sharp scissors, and immediately immerse it in the water. (The botany professor I've worked with for years says that even this is sometimes not enough--that the cut may need to be done under water, with the cut-open stem never being exposed to air.)

For my macro rig's steel-skinned subject stage, I've made tiny "vases" of brass tubing, crimped at the bottom and epoxied onto rare-earth magnets. The vases are of varying diameters for different plants, and project upward varying distances--from 1/2-inch to about 2 inches. I keep a variety of these around for different plant specimens. I fill the tube with water, cut off a section of the plant in the cup I carried outside, and quickly place it in the "vase." The cut section is exposed to air for only about a second. (If I ever encounter a situation in which even this lets air into the vascular tubes, I may try performing this operation under water.)

Another thing I find that helps is to include a leaf, or portion of a leaf, above the structure to be photographed. Then shine a bright light on that leaf, so that it actively photosynthesizes. Photosynthesis requires water, so the leaf will start pulling it up from the vase. A photosynthesizing leaf also transpires water out of its stomata which likely adds to the sucking force. In my experience, this can materially help keep water in the structurea I want to photograph.

The downside to this is that the leaf tends to move in any breath of air so I generally tape it to a microscope slide, which is held in a clamp epoxied to the same magnet as the "vase."

Nice pictures and interesting discussion. I am going to try the water ballons.

For single flowers or parts of flowers I use a petri dish with a wet cotton pad. If the flower moves - it usually does - I leave it for a while. It might be important not to change the intensity or direction of light and to have the same moisture all the time.

Thanks, Chris. Very interesting. Can you send a picture of your brass tubes?

If air is the culprit what about clamping the stem, then cutting it below the clamp. I'm thinking that an uncut stem is not actively sucking water up from below....especially when the soil is not moist. If we can mimic a system in equilibrium that might delay wilting?

Anyone know why some plant bloom tend to suck up water (like when you buy cut flowers at a florist). Other plants, it's a race against the clock to keep a bloom only for a few minutes.
Top

Esteemed Chris S. This makes sense. And I really appreciate the comments relayed from the botany profesor you worked with. I would expect him/her to be the best qualified for a satisfactory causal explanation. Much obliged!

Chris S. wrote: . . . Another thing I find that helps is to include a leaf, or portion of a leaf, above the structure to be photographed. Then shine a bright light on that leaf, so that it actively photosynthesizes. Photosynthesis requires water, so the leaf will start pulling it up from the vase. A photosynthesizing leaf also transpires water out of its stomata which likely adds to the sucking force. In my experience, this can materially help keep water in the structurea I want to photograph . . .

Brilliant! I very much admire your inventiveness. By chance, do you have any photo's posted of your stage?
Top
Post Reply Previous topicNext topic
18 posts