<PetaPixel: "The reality is, I took this photo in broad daylight in my backyard. The nearest background was actually my ugly yellow garage. Fortunately, the fly was set far enough away from the garage that the flash “fell off” before producing a hideous light yellow background."

To me, that "bug in the flashlight" appearance seems like something a lot of photographers work hard to avoid, and a look that most macro photographers stumble upon the first time they use flash.

But Stonewhite, you likely have a different viewpoint, to recommend the article. Would you care to share your thinking?

Ignoring the images, I cringe at the technical "explanation" offered in the article:

This happens because the flash output is so fast (and the shutter is generally open for a short enough amount of time) that the light from the flash doesn’t have time to reach the background, bounce back, and enter the camera before the shutter closes.

With light speed around 186,000 miles per second, the author must have some really fast shutter!

Egad, I missed that egregious paragraph. The three paragraphs above it, I did see, and they were reasonable--attributing the dark backgrounds to light fall-off, and describing how this occurs in an inverse square. The writer should have stopped there.

Ah, now I see why Rik saw it and I didn't--we read different versions of the article. I read the original at the author's blog: http://www.chasingbugs.com/macro-techni ... otography/ . It does not contain the offending paragraph.

The version at Petapixel, linked to in this thread, does contain the gaff--as well as the link I followed to the original source.

I wonder if the author has edited her blog to correct the error, or if Petapixel introduced the error in some editing of its own? Having written for various publications, I am all too aware that editors can and do introduce egregious mistakes, often without clearing them with the writer first.

A beginner asks, then: assuming the remainder of the PetaPixel article is credible, how does it occur that the background appears as black when the capture occurred (again--it is claimed) during the day?

thank you, Chris and Rik...

When you place a photographic flash close to an insect, the light it produces is typically much brighter than the sunlight falling on either the bug or the background. So a proper exposure for the now-extremely-bright bug renders the much darker background—lit merely by the sun—as black.

Chris S. wrote:I wonder if the author has edited her blog to correct the error

Yes, she did. As indicated in the comments at the end of the petapixel article:

To answer in more detail...

stonewhite wrote:how does it occur that the background appears as black when the capture occurred (again--it is claimed) during the day?

As Chris alluded, you just crank down the basic exposure low enough that the natural light doesn't register, like f/22 at 1/4000 second, then use a sufficiently powerful flash to adequately illuminate the foreground, leaving the background dark due to inverse-square falloff.

Not mentioned in the article is that you can't always do this trick with just a camera and a basic flash unit. That's because with a basic flash unit, the camera's shutter has to be set fairly slow, like 1/200 or 1/250 second, so that the sensor can be entirely exposed when the flash produces its single short pulse of light. Forced to use such a slow shutter, and with no other tricks, the natural light exposure will still register to some extent.

There are at least three honest ways to address that problem.

First is to only shoot in subdued light, where the background won't register enough to matter.

Second is to use a flash unit that supports "high speed sync" mode. With high speed sync, the camera's shutter can be set arbitrarily fast, like 1/4000 second. With that setting, the sensor is actually exposed only through a narrow slit between the shutter curtains, and the flash arranges to produce essentially uniform light for the roughly 1/200 second that is required to move that slit across the entire sensor. http://everydayhdr.com/tips-for-speed-l ... otography/ is emphatic (!) that when you're selecting a flash for macro work, be sure you get one that has this feature.

Third is to add a sufficiently strong neutral density filter, so that even at f/22 and 1/200 second, full daylight won't register.

A fourth way, not quite so honest, is to let the background go as dark as you can just by stopping down and living with 1/200 second, then push the background to full black in post-processing.

All this explained, I don't mind saying that in fact I don't consider the posting under discussion to be completely credible. When I look at the EXIF data in the last image, it shows f/18 and 1/200 second at ISO 200. In full sunlight, with no other tricks played, that would be only 1/3 stop less than normal exposure for the background. The background would be very far from black. So something else is going on that we haven't been told about. An ND filter is one possibility. Or a less technical possibility, "broad daylight" may actually mean "in dense shade". In any case, some assistance in post-processing is also strongly suggested by that last image's histogram, which shows that 81.58% of the pixels are pure black (0,0,0), and there's an obvious gap above that before a normal distribution resumes.

By the way, we really should move this thread to Technical Discussions. It is misplaced in the Nature Photography image gallery.

Agreed that we should move this thread.

In full sunlight, with no other tricks played, that would be only 1/3 stop less than normal exposure for the background. The background would be very far from black. So something else is going on. . . .

But doesn't Canon EXIF record nominal f/stop, rather than effective f/stop? (Admittedly, I know Nikon's ways, not Canon's, and may be wrong.) If so, wouldn't the effective f/stop be about two stops less, assuming the macro lens was set near 1x (aka 1:1)?

Chris S. wrote:But doesn't Canon EXIF record nominal f/stop, rather than effective f/stop? ... If so, wouldn't the effective f/stop be about two stops less, assuming the macro lens was set near 1x (aka 1:1)?

Yes, that's true. And if extension tubes were added, there could be even more difference.

Probably what we're seeing is just that, combined with substantially less than full sun, plus a bit of post-processing at petapixel. I notice in cross-checking that the corresponding image at http://www.chasingbugs.com/macro-techni ... otography/ doesn't have the telltale gap in the histogram, and substantially fewer pixels are full black. Somebody someplace messed with it, but we can't tell who.

I have moved this thread to the Macro and Micro Technique and Technical Discussions forum.

OK, I ran a field check.

Shooting Canon T1i, in-camera JPEG, using Canon 100 mm f/18 at 1:1, ISO 200 at 1/200 second, grass in full sun gives red and green peaks in the histogram centered around 19 (out of 255 possible). At that level of exposure a focused image would be dark but still easily recognizable. But when it's also OOF, it goes to a uniform dark color that's easily perceived as "black", about what we see in the first image of the petapixel thread.

Repeating the exercise in full shade produces peaks around 1, not visibly different from 0 in both cases.

Here's the test panel, focused on left and OOF on right, full sun on top and full shade on bottom. I've pasted a pure black bar across the middle of each row for comparison. 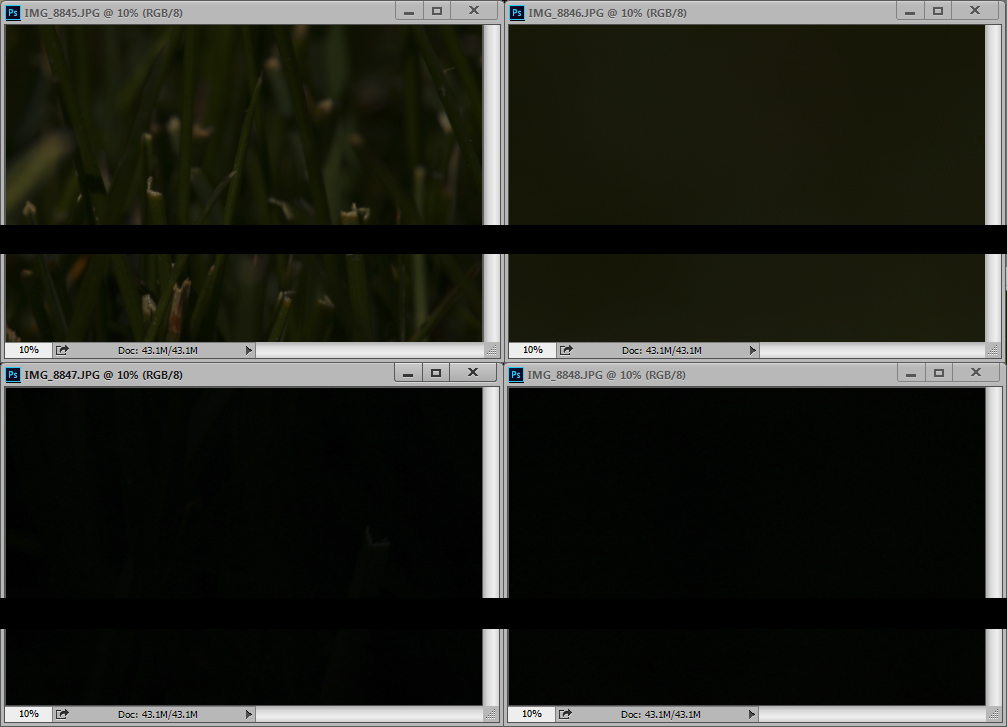 Contrary to my first impression, in the subject posting all images except the last one are actually consistent with having been shot in full sun or something close to it. Only the last image, the one specifically described as being "broad daylight", would have required shade to shoot.

Chris, thanks for the catch on the additional effect of 1:1 for reducing the effective aperture versus nominal setting on Canon.


rjlittlefield wrote:Only the last image, the one specifically described as being "broad daylight", would have required shade to shoot.

Couple of thoughts. First is that the author might have added a polarizing filter to her lens in hopes of reducing reflections. That could account for a stop or two of additional loss. While this is effectively the same as adding a neutral density filter, which you considered earlier, it be much easier for most of us to forget having done.

Stonewhite, you described yourself as a beginner. Have we lost you, yet?

If so, don't worry. Just get out your flash and take a picture of a bug. Use a low ISO setting on your camera, and a small aperture on the macro lens. Do you get a dark background? If not, post your picture in our beginners macro forum, list the settings you used, and describe the conditions under which you made the shot. Then we can discuss why your picture looks the way it does and what you can change to make the next picture look the way you want it to.

I wrote:To me, that "bug in the flashlight" appearance seems like something a lot of photographers work hard to avoid, and a look that most macro photographers stumble upon the first time they use flash.

I got to thinking about this earlier comment of mine, and it occurs to me that here is yet another way in which the experience of today's beginner is quite different from when I was a beginner--and that this particular effect is now less easy to get than it once was. The first time I used flash to make a macro picture of an insect, I was shooting Kodachrome 25 (film with an ISO of 25). A typical digital camera today has a minimum normal ISO of 200, so three stops higher. Also, Kodachrome had vastly less dynamic range than today's sensors do. Kodachrome had about 6 stops between bleached white and dead black, compared with 10-13 stops typical of today's digital sensors. Add the fact that I was often shooting at f/22 or f/32 nominal to get sufficient depth of field. So for a close-up photo of a bug lit with flash, a black background was the default. Today, we can still get it, but it isn't as inexorable as it once was.

The first time I got a roll of film back after purchasing a macro lens, I was thrilled with the sharpness and stark black background of my bug pictures lit with flash. But after doing a couple of slide shows of outdoor journeys, with mixed images of landscapes, people doing things, wild animals, and macro subjects, I got tired of the black backgrounds for every insect shot. My audiences did, too. It looked as if I did all my insect shooting at night. So I started working to get more natural looking backgrounds--which was, and still is, much more difficult.