How do you deal with retouching (or more likely post-processing) particularly furry parts of a stack? Large hairs etc are easy (though tedious) but I find patches of dense hairs can't really be retouched effectively in Zerene as the out-of-focus "noise" swamps the in-focus "signal".

My usual ploy is to retouch as much as I can, then bring the finished stack into Photoshop and use various standard tricks for reducing haze (masked layer with levels or curves adjustments, or sometimes just some manual burning of the relevant areas). However, this is very hit and miss, and doesn't always work.

I've found that the best approach is to try and avoid having these "furry bits" in front of a feature deeper in the stack - but that's not always possible and there's always the background to consider. It's usually OK against a dark (black) background, but fails miserably against a light one. See below...

I've attached a tight crop of an abandoned attempt to illustrate the point. Short of masking off every individual hair, I don't see how I can "adjust" the haze without affecting the background. Even then, features of the fly's "skin" are lost in the haze of the hairs too - really can't see a way around that. Perhaps different lighting?

How do you deal with this? Any hints and tips gratefully received. 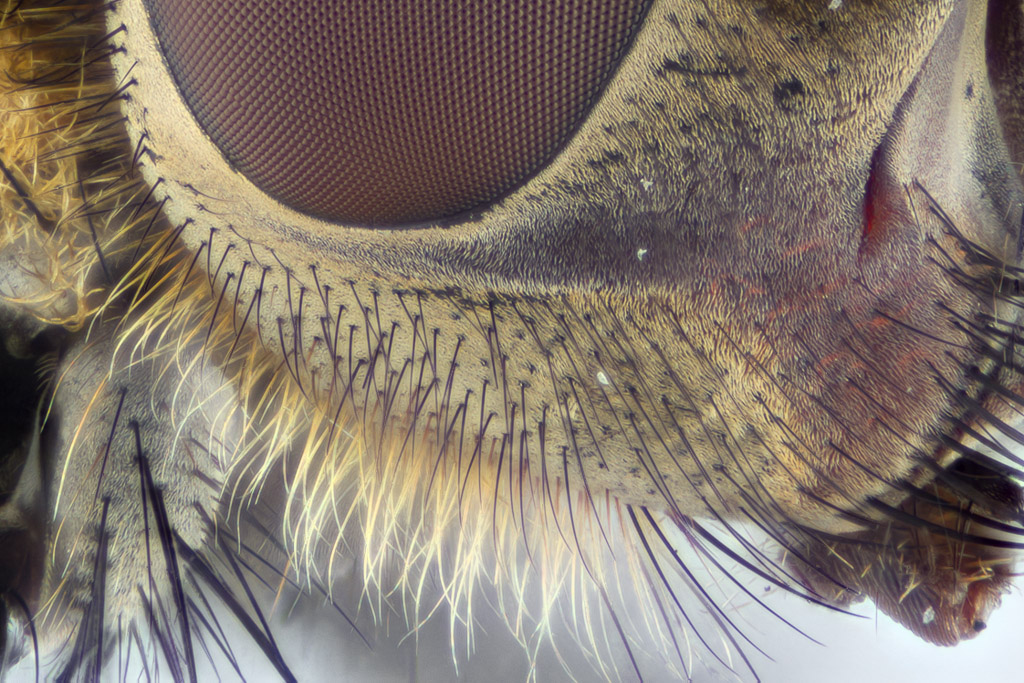 Ps. Please feel free to post images in responses (even edits of the image above if you feel so inclined). Before and after especially useful as it will give me a better idea of what I can expect (or try) to achieve. Cheers
Top

I do not think that there is a perfect answer as yet to this problem. However, a bit of careful localised burning can be used to improve the situation. Here is a quick and dirty proof of concept edit of your fly. 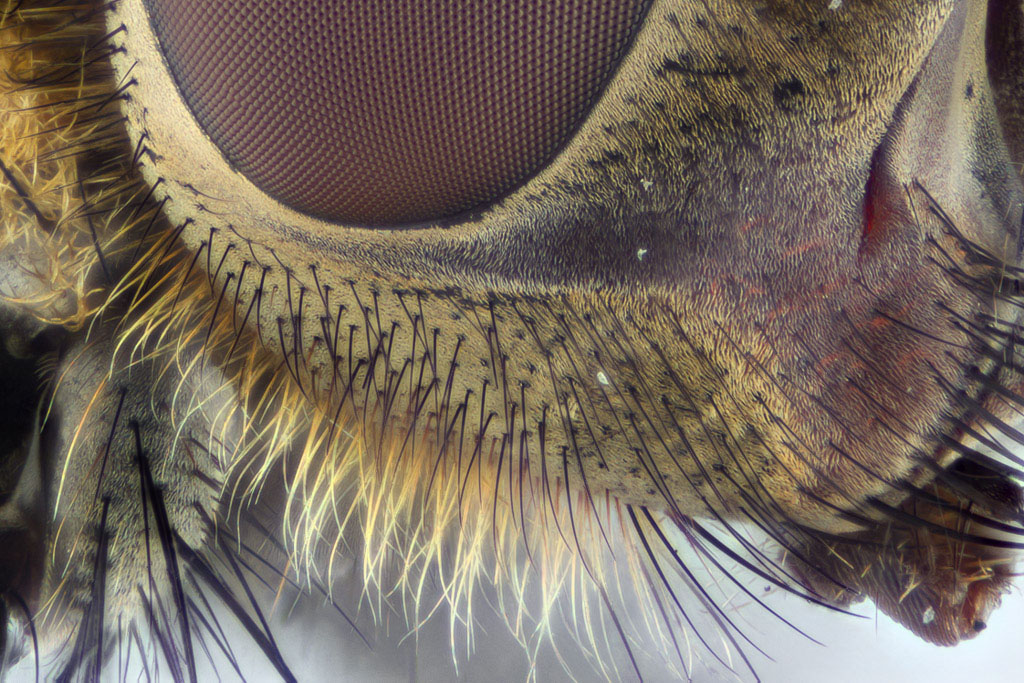 Here is what I did: -
1. Open the image in Photoshop.
2. Add a new blank layer above the image.
3. Set the layer blending mode for the blank layer to "soft light".
4. Set the two coloured squares on the Photoshop control panel to their defaults of black and white by pressing "D" on the keyboard.
5. Make sure that the black square is the one on top. If not, press "X" on the keyboard.
6. Choose the brush tool (shortcut "B").
7. Use a round brush with the hardness set to 0%.
8. Set the opacity and the flow for the brush to low values. For the proof of concept I used 60% and 20%. If working properly on an image, you would likely want to use lower figures. 10% for each means that you need to brush over a pixel 100 times before the maximum effect is reached. I know of high end magazine image retouchers who use 1% in each case. This gives a potential of 10,000 different levels for the effect, but takes too long unless someone is paying you by the hour.
9. Brush over the areas which you wish to improve. If you go too far, hit "X" and then you are painting with white on the soft light layer. You can switch back and forth between black and white painting until you are happy with the result (I know, none of us on here are ever really happy with the result...).

It takes much longer to read this explanation that it does to give it a try.

The blend mode of soft light is used in preference to that of overlay which you often see recommended for this type of task as it does not alter the colour of the image, merely the brightness.

I hope that someone else comes up with a better way than this I would like to learn it.

Hope that this is of some assistance.

Peter, thank you for the explanation of how to dodge and burn using "soft light" blending. This is simpler than the masked adjustment layers that I usually use.

Beatsy, I agree with your assessment that this is a job for post-processing and not retouching. I'm pretty sure that the pixel values you want in the output never appeared in the input. See http://www.photomacrography.net/forum/v ... 557#102557 and other postings in the same thread for discussion of this point, especially the diagram HERE.

In places, the situation you have here is close to the worst case, where you're trying to look through a forest of bright bristles to see detail on a darker background.

Peter - that really is a very flexible approach to (effectively) dodging and burning, and better in that it works on all layers below too. Another one for the Photoshop kit bag. Cheers.

Rik - thanks for the link which reminded me about frequency separation that I've used on portraiture work before (people specimens). Never occurred to me to try it here. Doh.

I take some comfort from the fact that I really have hit a boundary case though, so it's not necessarily just me being gormless

Glad that my suggestion was of some assistance. It really is a very flexible way to fine tune tonality. Although I scoffed at the idea of 1% opacity flowed 1% at a time, nevertheless it can occasionally be helpful to turn the settings down very low when you get close to the result that you desire, as a way of fine tuning the output.

I certainly would not like to try using masked adjustment layers to fettle the contrast of the hairs and the background on a fly such as this.

Frequency separation is a great retouching tool, but not IMO ideal for the sort of heavy lifting which is required to try to deal with this type of problem.

This is with a rough 5 minute rinse with Topaz Clarity & Topaz Detail - 2 photoshop plugins I've always found especially useful. The area immediately adjacent to the hairs is a different problem, but Topaz brings out more on the fur between. 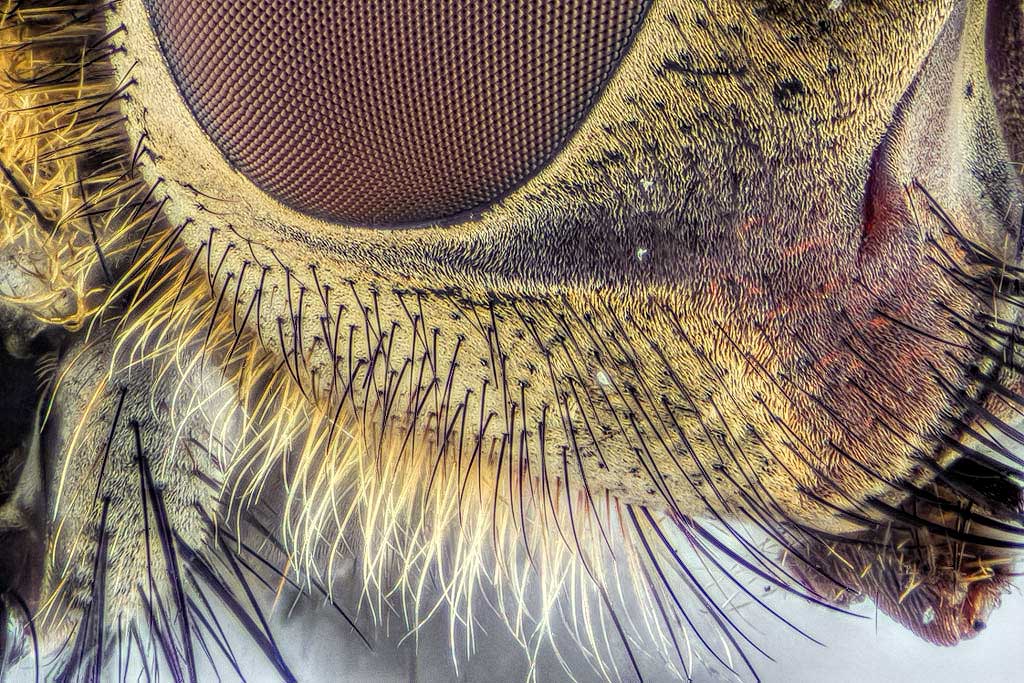 I like the results Johan got with the Topaz plugins. But, if you don't want to buy more software, I like a local (masked) levels adjustment for haze removal. Select the area roughly with a feathered lasso, click the levels adjustment layer button on the levels palette and adjust till it works - trimming off the gray ends and altering the overall brightness to match the surrounding areas (and painting into the mask to fine tune the boundaries). I think levels gives you better control over the haze without affecting other things you don't want to (vs burning).

This was very quick - like everyone else's - but I think there's an improvement: 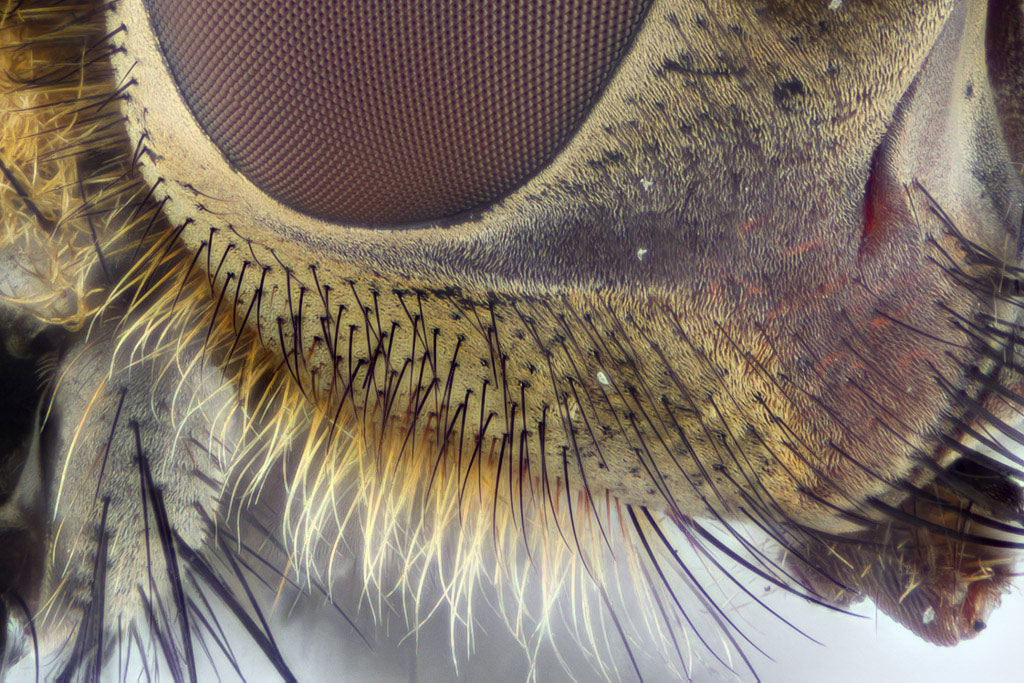 If your pictures aren't good enough, you're not close enough. - Robert Capa
Top

Although I have commercial filters (Nik, On1, DxO), most everything can be achieved in Photoshop. One way I increase detail and contrast is:

Make a duplicate of your image layer
On the duplicate layer--
--Use curves to increase the contrast and lighten overall
--Use HSB to desaturate
--Use sharpen filters as desired
--set layer opacity to around 30%
--set layer blending to soft light
Adjust all steps until you find a combination you like
If it is a filter you'll use often, you can create a PS action to repeat the steps

Yes, desaturate the entire layer, more or less, depending on the effect you want. If the entire layer is more like a high contrast grayscale, that will give you a more predictable increase of overall contrast when you use soft light, hard light or overlay blending modes.

There are many ways to do image adjustment--and this method is one quick, non-destructive way I found works well for me.
Top

I decided to show step-by-step screen shots for my quick post-processing method in Photoshop. This method will add contrast and detail while leaving the original image intact. If desired, the filtered effect can be selectively applied/removed by the use of a layer mask, which I will also show.

I took a couple of the steps in slightly different order than my previous post, and made definitive choices on how much effect to add. All of the steps can be tweaked to taste.

Step 1:
Duplicate the image layer by right clicking on the layer and selecting "Duplicate" from the pop-up menu. Make sure the duplicate layer is above the original. 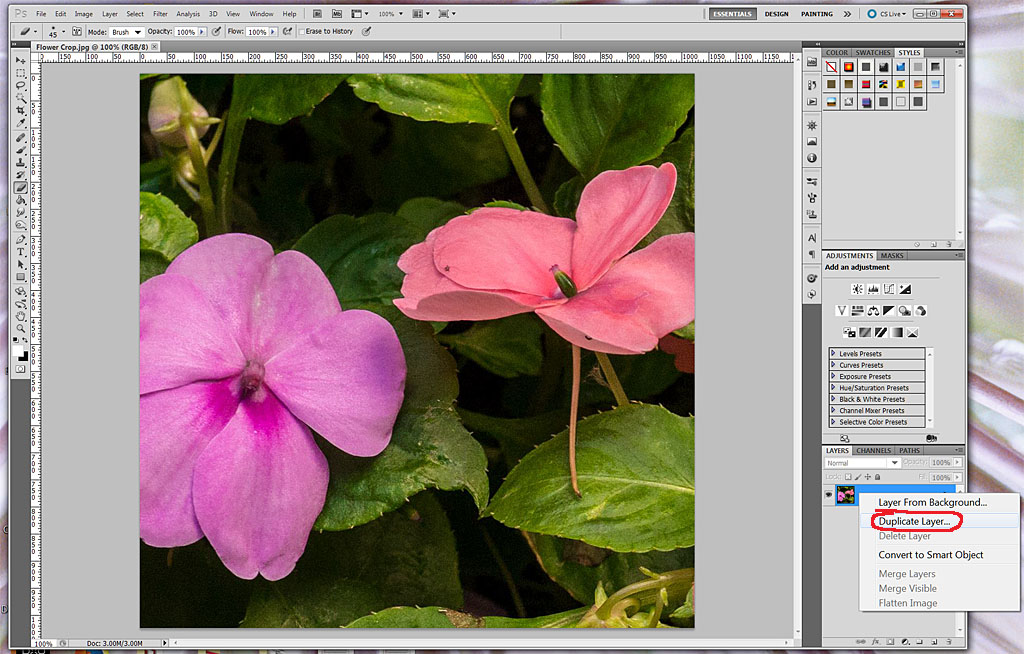 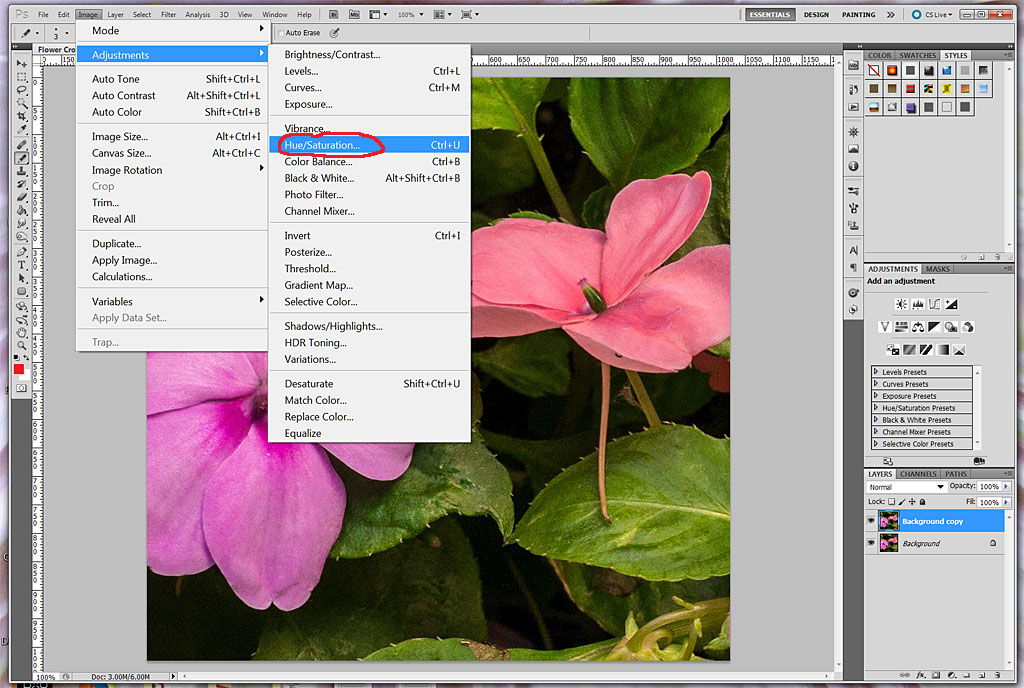 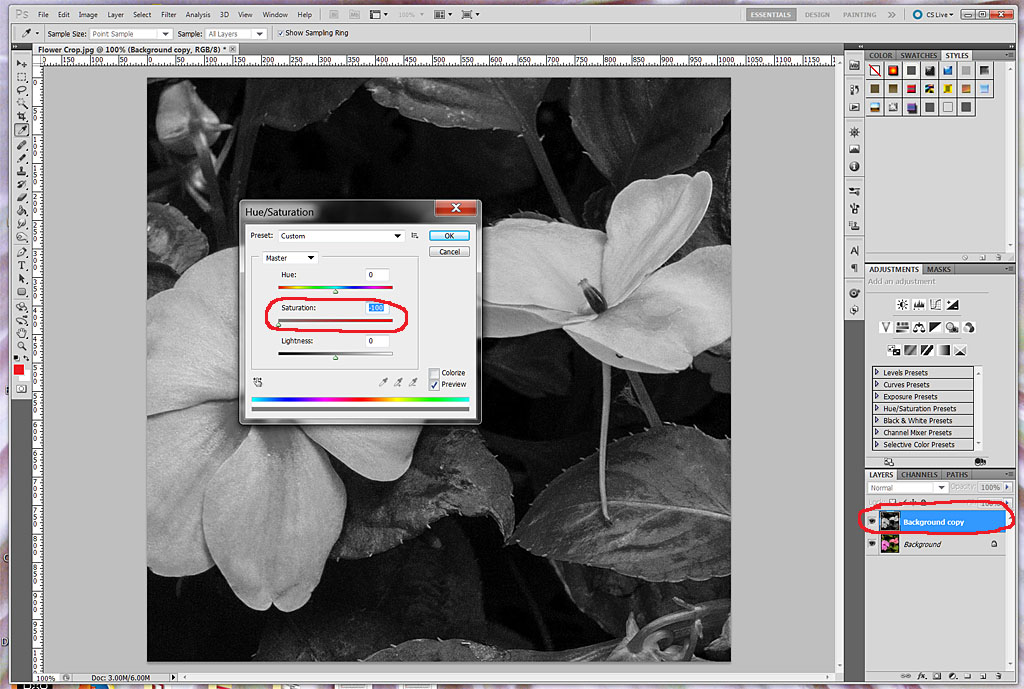 Step 3:
With the duplicate layer selected, choose "Curves" from the "Image" menu. In the pop-up dialog box, use the mouse cursor to click and drag the center of the curve upward. This will have the effect of lightening and increasing contrast. 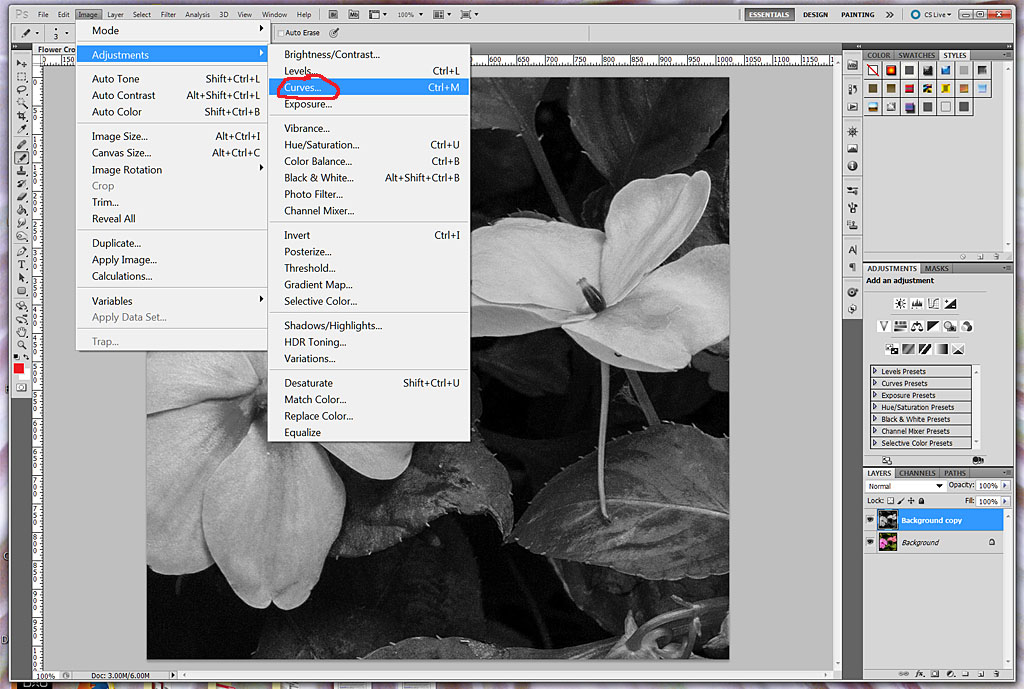 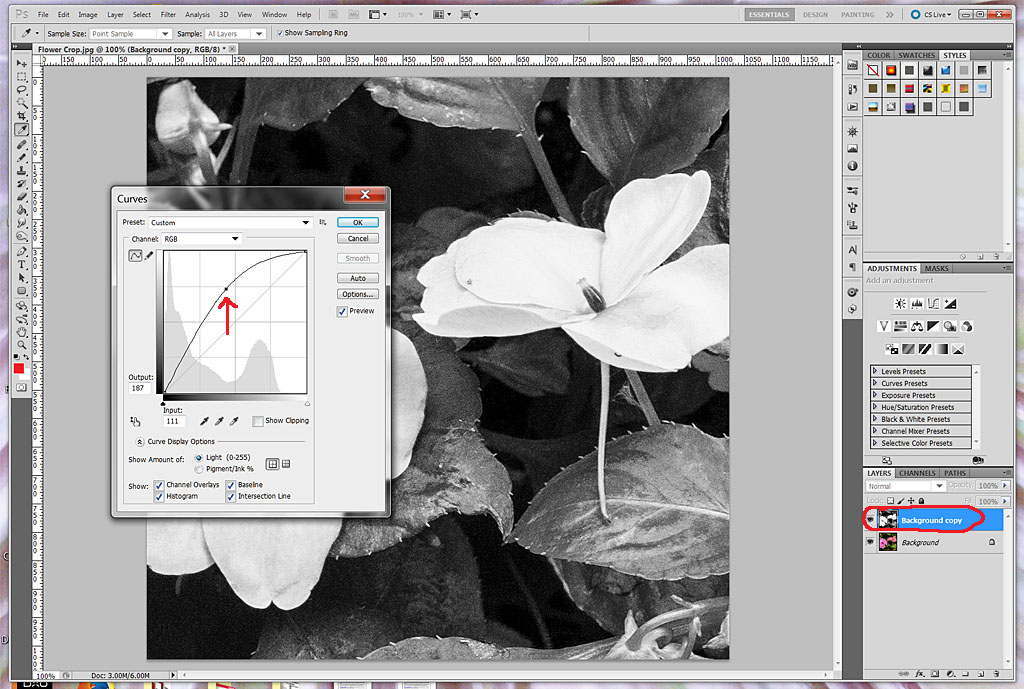 Step 4:
With the duplicate layer selected, choose a sharpening filter from the "Filter" Menu. In my example, I used "Unsharp Mask" with some subtle but discernable settings. 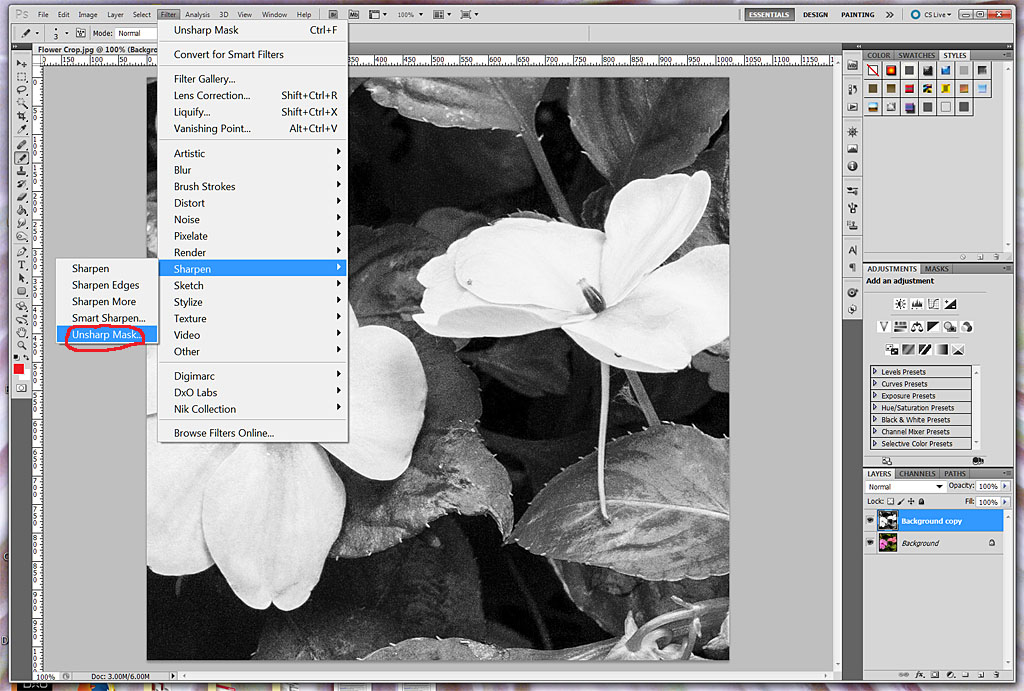 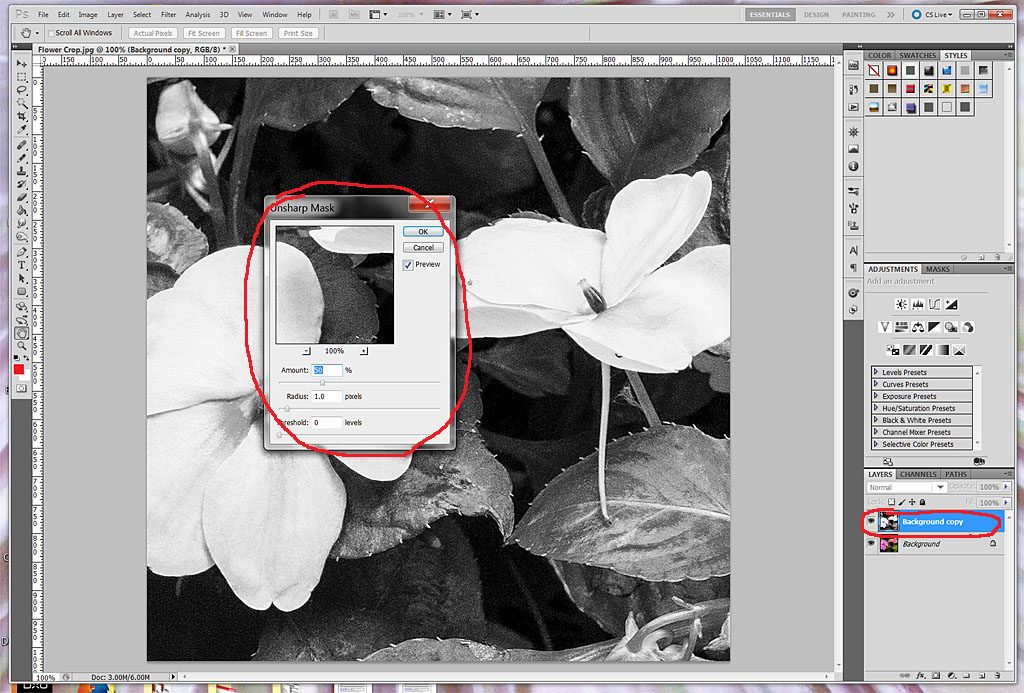 Step 5:
With the duplicate layer selected, choose "Overlay", "Hard Light" or "Soft Light" from the layer blending mode pop-up menu. "Soft Light" is the most subtle contrast mode of the three, and is the one I selected for this example. In the same layer, reduce the opacity--I chose 30%. 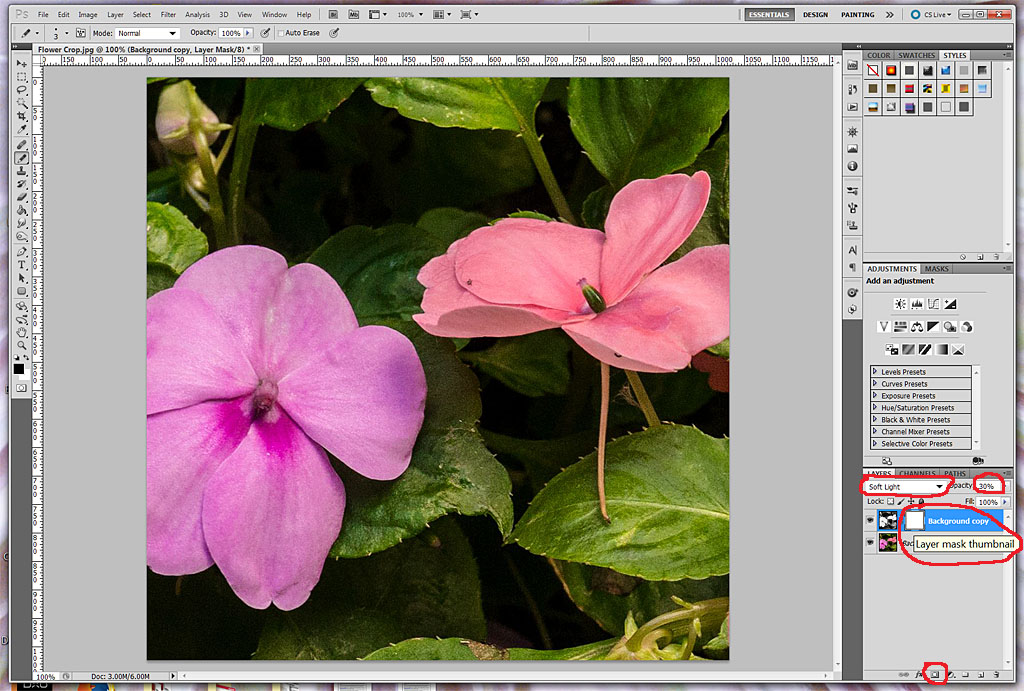 Step 6:
With the layer mask selected, use the paint brush to paint over areas to remove the filtering effect. Painting on a layer mask has the effect of blocking the layer it is associated with, allowing the layer below to show through. In my example, I circled the areas that I "painted"--on the layer mask there are black paint strokes representing those painted areas. I used a round paintbrush with feathered edges (brush hardness 0%). I set the brush at 100% opacity. However, different brushes and brush opacities can be used to subtly alter the layer mask.

For cases where you only want to filter a small area of the original, use the paint bucket to fill the layer mask, and then use the eraser to selectively "cut out" parts of the mask. 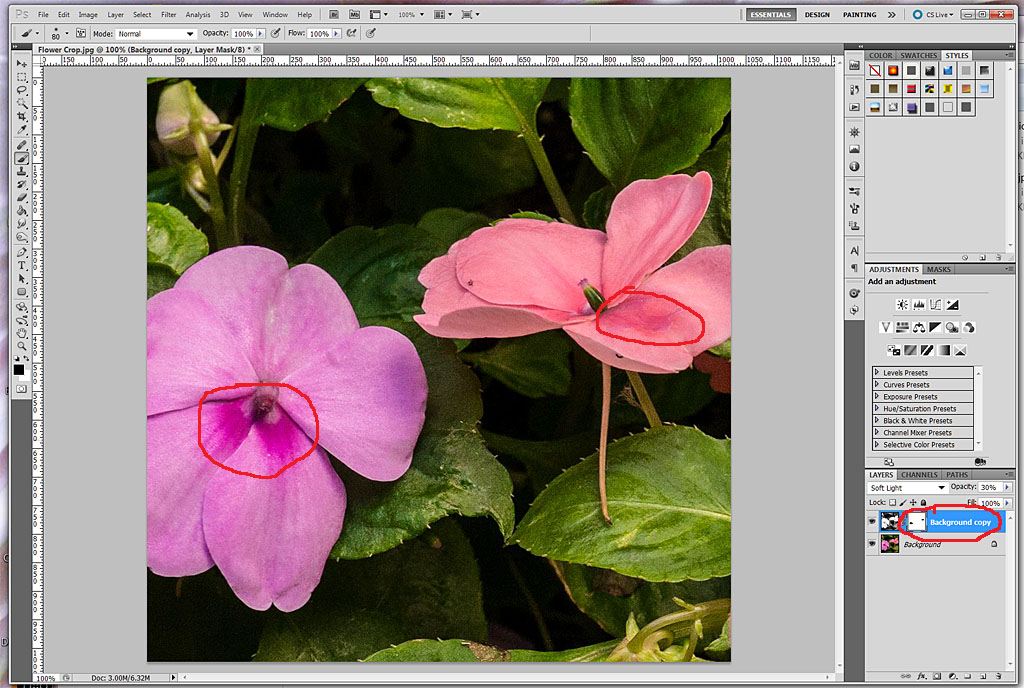 Here is the original image: 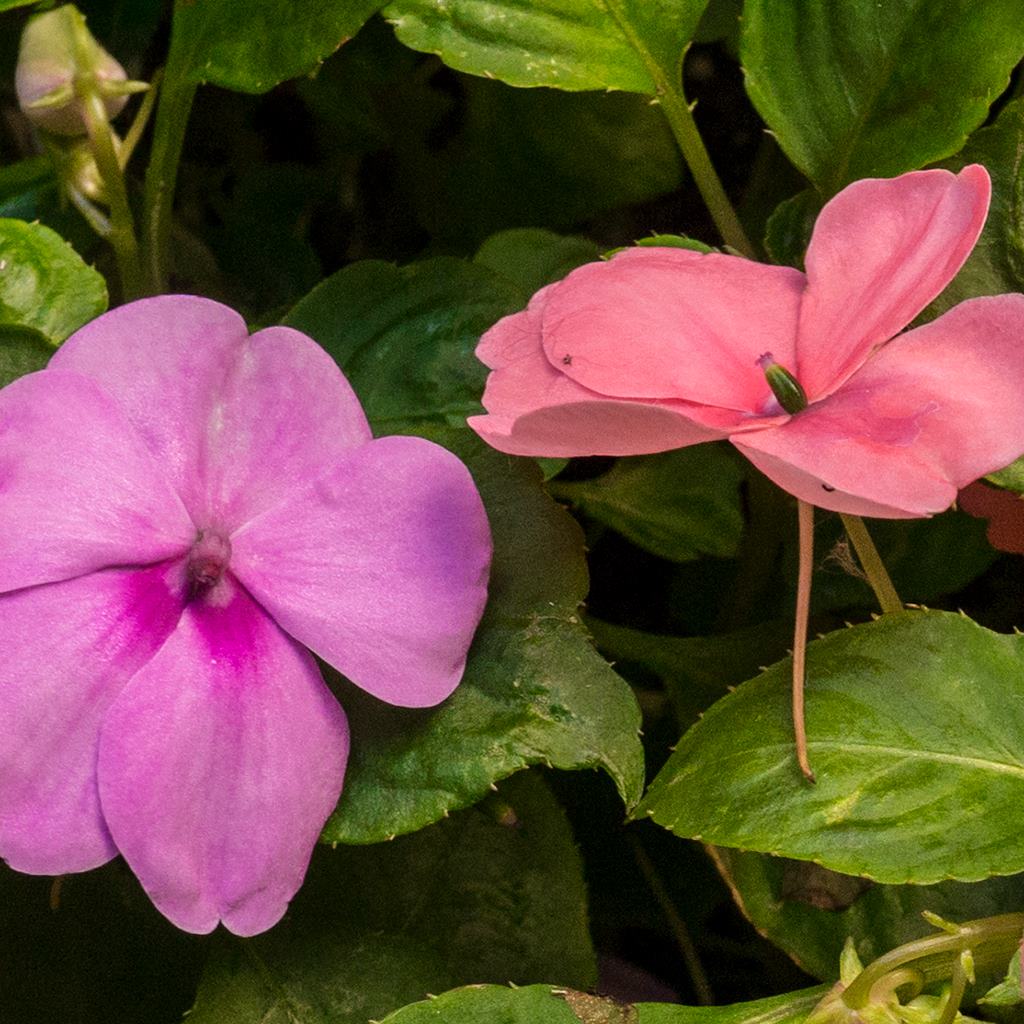 And here is the image with contrast filtering applied: 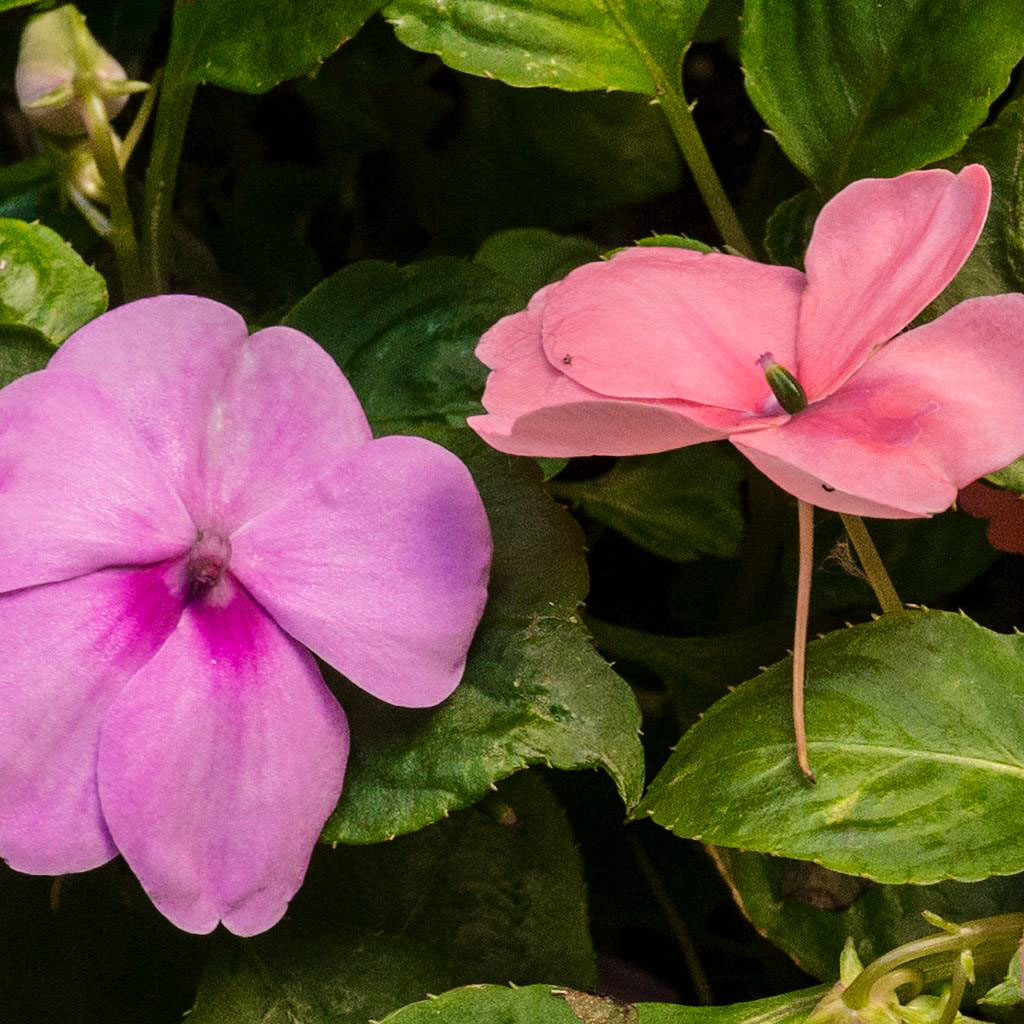 Although the original image has a fair amount of noise, the processed image looks more detailed and has a bit more "pop". As always, better quality input will yield better results!
Top

I read about the new "DeHaze" slider in the latest incarnation of Camera Raw (v 9.1) released today for Photoshop and Lightroom. It seems like a natural for hazy hairy stacking artifacts, and thought the photo in this thread would make a nice test subject.
So here goes: 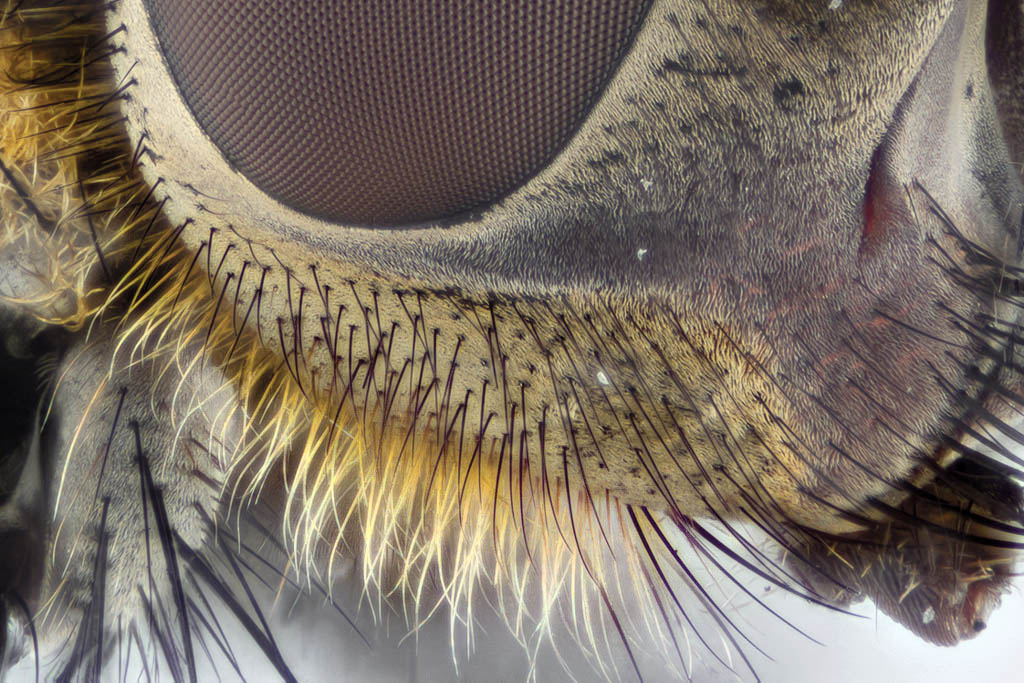 Notes: I did a quick 22pix feathered select of the hairy region. Also, because dehaze tends to boost saturation, I lowered the vibrance on the selected area after the dehaze in order to match the rest of the image better. I think that's realistically what you'll need to do if you use this filter.

To my eye, it does a fairly decent job for such a quick tool.

The Dehaze slider is at the top of the fx tab under camera raw 9.1. Another note: While it hasn't been publicized in this release of PS CC, they moved the "Save For Web" option. Instead go to the File>Export submenu.
If your pictures aren't good enough, you're not close enough. - Robert Capa
Top
Post Reply Previous topicNext topic
13 posts • Page 1 of 1