I've been wondering about this for a little while re lenses for general photography and getting into macro, it seems an even more interesting question:

To what degree is chromatic aberration actually correctable in software like Photoshop/Lightroom/DXO?

Specifically:
While CA is mostly talked about as a high contrast edge problem, it is simply more obvious there, no? It has the effect of altering colors and smearing detail on any area of the image that isn't a solid block of color, doesn't it?

SO: Does the Camera Raw processing in Photoshop actually correct chromatic aberration, or does it just seek those higher contrast edges and desaturate/blend the purplish/greenish areas?

I've noticed that if you move the slider too far, the edges with CR (and any other high contrast edge) starts to have a gray boundary. If it is truly correcting CA throughout the image, is that graying something to watch for other than on edges (and what form would it visibly take?)

I've tried to determine this by looking and an area near the edge of the image that isn't particularly high contrast but has a fine rough texture. The idea is that if CA is causing some fuzziness on lower contrast detail, and if the software correction is truly fixing the optical defect (and not just a crude fix on edge color), these areas ought to be sharper after correcting the more obvious CA.

I couldn't really tell for sure. I think there was improvement, but ??
Wikipedia is ambiguous on the topic, allowing that lateral ca can be corrected to some degree in software, though in practice there is loss of image detail unless it is corrected using a "detailed knowledge of the optical system." (DXO Optics pro- which unfortunately just doubled in price, depends on testing of individual lenses on individual cameras. But somehow I don't think their database includes a reversed 20 year old Componon).

Has anyone compared lenses of similar resolution where one is more corrected for CA than the other, and then compared a software corrected image to the apochromatic lens image? A better way of testing?

I think it's more than a theoretical question because through out these forums, in discussions of lenses, there are references to CA not being a huge factor because it can be corrected in post. So in comparing lenses, it's worthwhile to know just how much that correction really helps vs the pricier options.
If your pictures aren't good enough, you're not close enough. - Robert Capa
Top

First, recognize that there are two very different kinds of chromatic aberration.

One kind, called "lateral" or "transverse", occurs when the lens effectively has different magnifications for different colors, even though all colors focus in more or less the same plane. This form causes the classic bands of color around high contrast edges that happen to be oriented tangential to the optical axis.

The other kind, called "longitudinal" or "axial", occurs when the lens effectively has different focal lengths for different colors, so the colors focus in different planes. However, the magnification for each color may be identical in any particular plane. This form causes a very different appearance in which small dark features appear different colors when they are slightly in front or in back of focus, and in which their true colors may never appear at any focus.

Suppose you image dark tree branches against a bright sky. Then transverse CA will be visible only away from center and will manifest as colored bands around tangentially oriented branches. But axial CA will be visible everywhere, and will manifest as branches that typically look purplish or bluish. (You will of course have focused the green image because that's what your eye is most sensitive to. The dark branch will then be filled in with some combination of red and blue from the surrounding sky, depending on how badly those colors are defocused.)

Now, to answer your question...

The colored bands of transverse CA can be very well corrected, by simply re-scaling two of the RGB bands to match the third. This provides a first order correction. There may be a small amount of residual banding that is essentially due to metamerism. For example the "red" halos in two different regions may be caused by different wavelengths of red light and thus would require different corrections to get rid of completely. In addition, there is almost always a radial "smearing" effect away from center that is due to different wavelengths producing different scales within each RGB band. However, in typical white-light images this remaining smear is difficult to distinguish from other types of aberration such as astigmatism.

In contrast, the off-colored details of axial CA can not be very well corrected. The usual "correction" in this case consists of identifying light/dark patterns with color casts that look like they're probably due to axial CA, and just de-saturating them. When done well this can be quite helpful (see for example Charles Krebs' recent post HERE). But when done badly it can produce nonsense. I was recently asked to diagnose a bad stack in which the most obvious artifact was a type of halo I had not seen before: 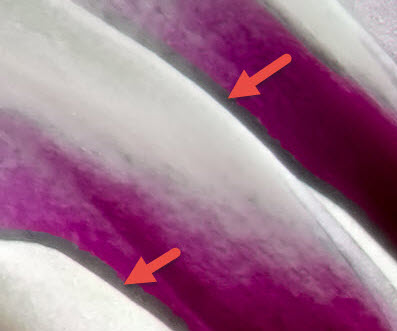 As you might guess from its appearance in the current discussion, this artifact had nothing to do with the stacking. It was instead a horribly failed attempt to deal with axial CA, as shown here using Photoshop's chromatic aberration filter on one of the source images. 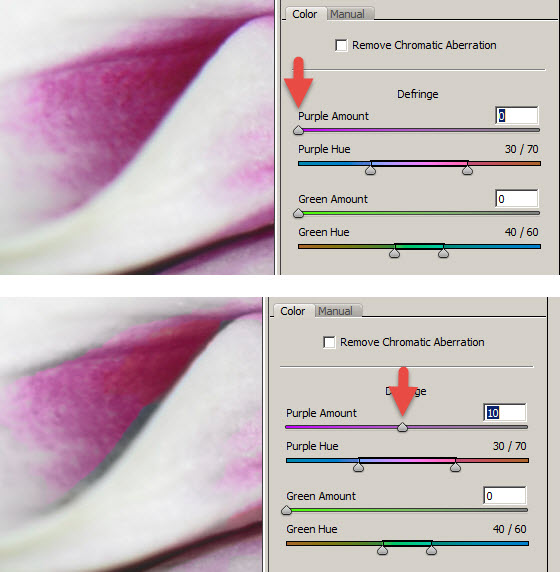 To summarize... Transverse CA can be corrected very well by working from first principles, while axial CA can only be attacked by heuristics.

Thank you Rik! That's the most helpful thing I've read about software and chromatic aberration corrections.

So Camera Raw is really only attacking the transverse CA and it is actually truly correcting it by rescaling R, G &B to match each other's scaling and it's not just a cosmetic patching up of purple & green fringes only at edges.

And, an attempt to correct Axial with Camera Raw will only screw up the transverse correction and can leave the gray edges like you showed. Is that right?

And software like DXO Optics Pro that claims to use intimate knowledge of specific lens/sensor combos is still only correcting transverse CA - albeit maybe doing a little bit better job.

It seems like to correct axial CA, you'd have to have something like a stack of images in slightly different focus planes and be able to pick out separate R G & B channels of the image for ideal focus and recombine the result... Though I'm guessing that would screw up the scaling of the RGB channels relative to each other. But that would be converting axial to transverse CA - which is conventionally correctable - maybe? Just a pondering...
If your pictures aren't good enough, you're not close enough. - Robert Capa
Top

MaxRockbin wrote:And, an attempt to correct Axial with Camera Raw will only screw up the transverse correction and can leave the gray edges like you showed. Is that right?

I don't think the transverse correction would get messed up by trying to correct axial. One of them rescales and the other desaturates, so there's no basic conflict.


It seems like to correct axial CA, you'd have to have something like a stack of images in slightly different focus planes and be able to pick out separate R G & B channels of the image for ideal focus and recombine the result...

From time to time somebody suggests extending Zerene Stacker to do that. I always offer polite support and say that I don't have time to work on it right then, but they could run a quick feasibility study by using Photoshop or some such to rip apart the channels, run three stacks and reassemble the outputs, and I would be very interested to see the results.

So far the most solid feedback I've gotten could be summarized as roughly "Hmm, that didn't work as well as I had hoped." I've never seen the images, so I don't know what goes wrong.

But if you have time to do the experiment, I really would be interested!

This is kind of entertaining. I was Googling to see if a 3 color system (like a 3 CCD camera or technicolor) typically has tweaked optical paths so all 3 colors are in perfect focus - preventing axial CA fuzziness (the paths would have to be automatically adjusted for focal length and distance to subject I'd guess).

But instead of what I was looking for, I found this paper which proposes creating an image stack from axial chromatic aberrations

"With color CCD cameras and white light sources common, we asked if axial chromatic aberration can be utilized to acquire multiple focal planes simultaneously, and if it can be controlled through a range sufficient for practical use. For proof of concept, we theoretically and experimentally explored the focal differences between three narrow wavelength bands on a 3-chip color CCD camera with and without glass inserts of various thicknesses and dispersions."
http://www.ncbi.nlm.nih.gov/pmc/articles/PMC2838728/
If your pictures aren't good enough, you're not close enough. - Robert Capa
Top
Post Reply Previous topicNext topic
5 posts • Page 1 of 1