Does anyone on the forum have experience with pushing this objective (10X Mitutoyo Plan Apo Infinity LWD) to lower magnifications via a lower power tube lens? I understand that this is possible with certain Nikon objectives (as has been covered in detail by Rik), but I am unsure if the same is true of the Mitutoyos.

I post this query because I am currently weighing up the relative suitability of obtaining either the Mitutoyo 10x or 5x, with a view to pushing them to lower or higher magnifications respectively on an APS sensor (most likely closer to the 5x end of things, but with the option of higher magnification). Naturally, I understand that this involves a certain amount of compromise, but I'd prefer to lean on the experiences of esteemed elders. Any recommendations from persons more experienced than myself would be a great help.

I expect that this has been discussed previously, so please accept my apologies if this has already been addressed.
---
Matt Inman
Top

The results from a Mitutoyo 5X Plan Apo pushed down to 3X on an APS sensor are shown here.

Quick summary is that it works to a point, but the corners go bad sooner than they do with the Nikons. At 5X on 100 mm tube lens, the Nikon MRL00102 (CFI 60 series) is still clean in 3 out of 4 corners, while the Mitutoyo is severely aberrated in all 4. The test images are posted, so you can check them in detail yourself.

Rik: Thanks for pointing me at the right post, much appreciated.

David: Thanks also for pointing me at your post. It may be that I should be looking at the 5x as an entry point.

How much of a difference in longitudinal aberration is there between the Nikon and Mitu objectives? The reason I ask is because, at the moment, my primary problems are low contrast and axial CA.

I understand that it can be difficult to compare, but one of the biggest problems I am having with my current set of optics [sundry enlarger lenses] is kooky colour aberrations around high contrast edges. It's causing some fairly horrid colour shifts in some of my [admittedly early] stacks that are not really amenable to straightforward correction.
---
Matt Inman
Top

How much of a difference in longitudinal aberration is there between the Nikon and Mitu objectives?


These are 50% of actual pixels on Canon T1i (15 megapixels APS-C). All of the infinites are using Mitutoyo MT-1 tube lens. Halogen illuminator at full power, camera at built-in WB for incandescent.

Target is a chrome-on-glass micrometer slide, held at a tilt in front of a white index card to provide back-lighting. 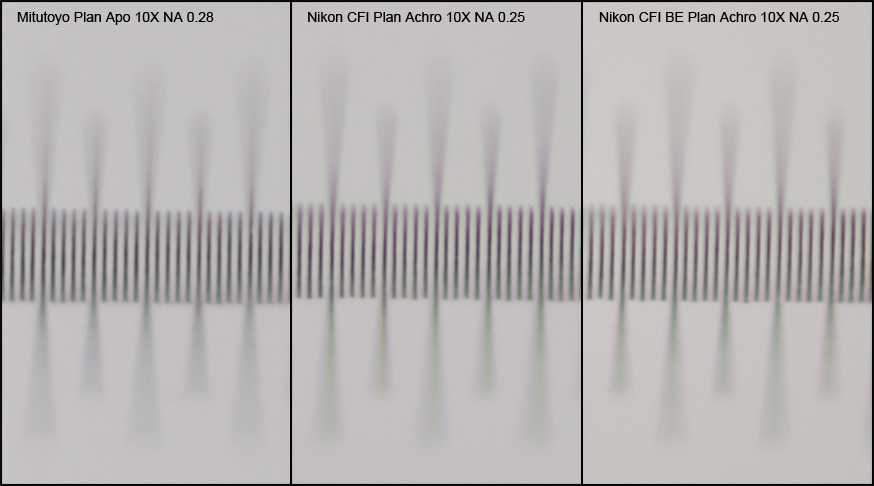 Throwing in a couple of finites also: 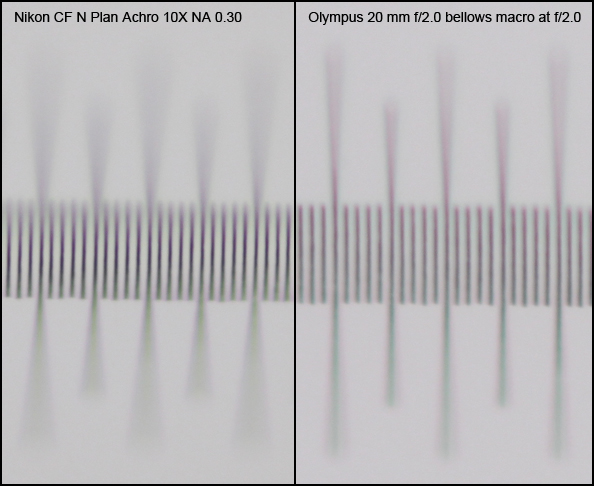 Can you show us an example of what you're running into?

Matt, I regularly use Mitutoyos 2x through 100x, and think you'll find them remarkably free from CA (with the exception of the 2x). I use them only on a 200mm tube lens, so know little about their performance when pushed or pulled.

However, I did once do a quick stack of a butterfly wing in each of three optical regimes: 10x Mitty on a 105mm lens, 5x Mitty on a 200mm lens, and a finite Nikon N Plan Apo 4x/0.20 at about 5x on a bellows. My sense was that I could get good results from any of those approaches (only two of which, of course, apply to your current choice). If you'd like to judge for yourself, PM me with your email address and I'll send you the straight-from-Zerene-Stacker jpegs. You'll want to do a curves adjustment and some sharpening; the amount of each will be different for each jpeg. You might find, as I did, that your post-processing decisions make more difference to the final product than did the original choice among these optics.

Chris, thanks for reminding me of other lenses to throw in for comparison. I've added to my earlier post a Nikon CF N Plan Achromat 10X NA 0.30 and an Olympus 20 mm f/2.0 bellows macro lens.

I think the Olympus actually reveals a weakness of this particular test. That lens is known to create strong false colors in other circumstances, but in this simple tilted-plane test it doesn't look all that bad. Maybe I should go back to using scored sandpaper for everything?

Anyway, I will be very interested to see what sorts of problems Matt shows us. A recent email regarding a finely textured shiny surface reminded me of the importance of diffuse illumination in avoiding false colors due to diffraction effects. Matt, you might take a look HERE and in the surrounding thread for more information about that.

Yay, Rik! I'd hoped you would add the N Plan 10x/0.30, as it's a lens I've used a lot, so a very useful benchmark. I at first even wrote a suggestion to that effect, then deleted it, as it seemed I was asking too much.

So the Nikon 10x finite and 10x infinites are pretty similar in CA--not surprising, but also useful to have confirmed. I think that if you were ever to test the higher power objectives, Nikon against Mitty, the CA differences would become notably more striking with each jump in magnification.


Maybe I should go back to using scored sandpaper for everything?

I think this tilted-plane test showed axial chromatic aberration very clearly, and was great for that. Scored sandpaper shows other things. BTW, this made me wish I had a stage micrometer intended for transmitted illumination. Mine, designed for reflected light, wouldn't well work for it.

I'll also be interested in seeing what problems Matt has been grappling with. I suspect many of us will recognize some of our own old nemeses.


A recent email regarding a finely textured shiny surface reminded me of the importance of diffuse illumination in avoiding false colors due to diffraction effects.

You know, Rik, since I've been working with Mitutoyo objectives, I've found much more freedom to use undiffused light. This is something I appreciate, as if provides a lot more capability to use light to tell the story of the subject. Have you noticed this with yours?

Chris S. wrote:You know, Rik, since I've been working with Mitutoyo objectives, I've found much more freedom to use undiffused light. ... Have you noticed this with yours?

No, but I haven't looked. I'm so used to requiring diffusion for other reasons that I just routinely throw in lots. That's an interesting observation and I'll look for that effect in the future.

For practical use on bellows and similar set-ups, with 3-dimensional nature subjects you need adequate working distances. When it comes to microscope objectives this eliminates a considerable number of very highly (apo) corrected lenses. For this use the cleanest lenses I have tried above 5X, in regard to color aberrations, have been the Mitutoyo M Plan Apos (and the little JML 21mm). I have little doubt that the Nikon and Olympus "M-Apos" are at least as good as the Mitutoyo Apo, but they do not make 5X and 10X versions, and the short working distances make them not suitable for this type of work. The Olympus M Plan Fluorites are superb as well, and while not "Apo" have excellent color correction. (Although I have not used them, I would expect the similar Nikon M Fluors, such as the CFI LU Plan FLUOR EPI 5X, to be equally good.) Both the Olympus and Nikon M-fluorites are available in 5X and 10X with adequate (though less than Mitutoyo) working distances.

The only one I have tried with a shorter than normal tube lenses is the 10X Mitutoyo. And that was pretty modest in that it was a 150mm tube lens rather than a 200mm. The 7.5X results on an APS-sized sensor were excellent, with no apparent coverage problem. (A couple examples here, and here)

I've spent a good part of this past 8 months working with tiny, bright (mirror-like) complex metal pieces with lots of edges and points. As far as real picture taking is concerned, it would be hard for me to imagine a more difficult chromatic aberration stress test. CA was one of my major problems. Even the Mitutoyo Apo showed some "color" but it was the best option. The Olympus Plan Fluors were next best. At lower magnifications a negative surprise was my 40/2.8 Apo Componon HM. If used at 5.6 or smaller it was OK. At f/2.8 and f/4 was a problem in this regard, and as a result I only used it at magnifications up to about 4X. In some cases it was necessary to run raw files through the newest ACR (Adobe Camera Raw) which has a good routine for chromatic aberration correction (both latitudinal and longitudinal). It made a huge difference in the stacked results. Never really had to do this with "nature" subjects.
http://www.krebsmicro.com
Top
Post Reply Previous topicNext topic
11 posts • Page 1 of 1