In this topic the images are of the exact setup, except that my film OM4 stands in for my E-P2. Actually, I will be using just the same setup for film with that camera. With the film camera I have a choice of TTL metered flash or manual flash. The latter is used for the EP-2 because it is not compatable for TTL and I prefer manual flash, as the background does not influence the exposure. This is for a field of view (x2 crop factor) between 3mm and 10mm.

The flash guns are Olympus OM T32 and T20. They are linked with TTL cords with each other and with the hotshoe. There is a 3-way connector taped to the side of the T32 flash. The T20 can only be connected to a TTL cord through its special hotshoe.

The T32 has a propietary Diffuser, masked on four sides with cooking foil to minimis loss of light. the T20 has four layers of rubber foam packing material as diffuser. The T32 is used on half power (GN32m) and the T20 on full power (20m). This is normally used at ISO 100 with aperture f11 or f16. (Some fine tuning is required).

The flash guns are on tilting hotshoes, designed for mounting on tripods, here attached to lens tripod clamps. Most important: the hotshoe on which the T32 is mounted has a layer of electrical insulation tape to prevent the metal contacts from shorting out the gun. The shoe for the T20 is part of the TTL system so tape must not be used. Triggering is entirely through the TTL cords.

The T32 has a small, bright LED torch taped on so as to illuminate the center of field at the correct distance. This makes framing and focus much easier.

The lens is a Kiron 28-70mm f3.5-4.5 zoom, reverse-mounted. It has a Nikon mount, making it fully manual (stopped down) in this configuration.

The extension is 110mm, here provided by an OM telescopic extension tube, but any tubes could be used.

I hope there is something here, also, of less specific use, for non-OM users. Having said that, T32 and T20 units are available at low cost on Ebay.

Now for the pictures. The setup was simply placed on a carpet. Contrast and fill lighting have been added digitaly to permit detail to be seen. 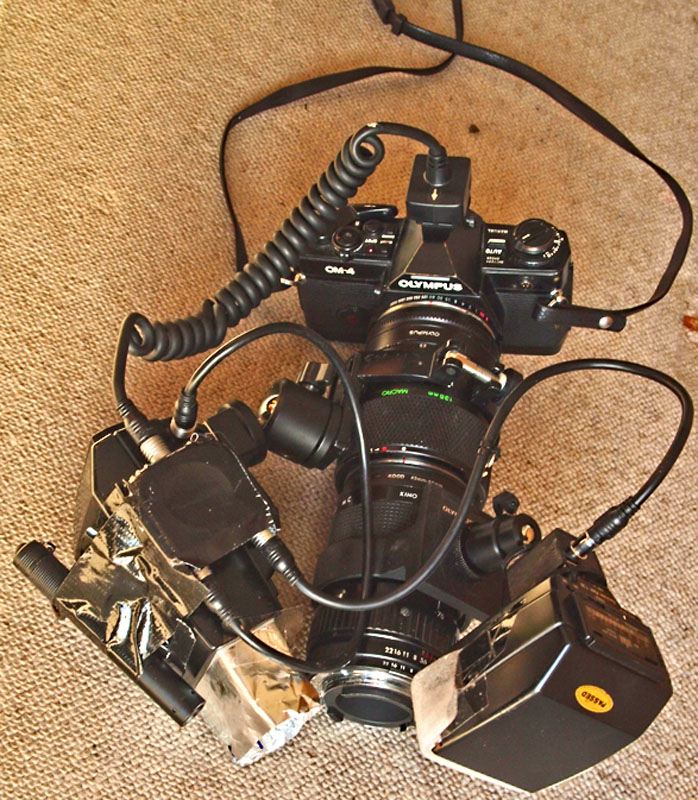 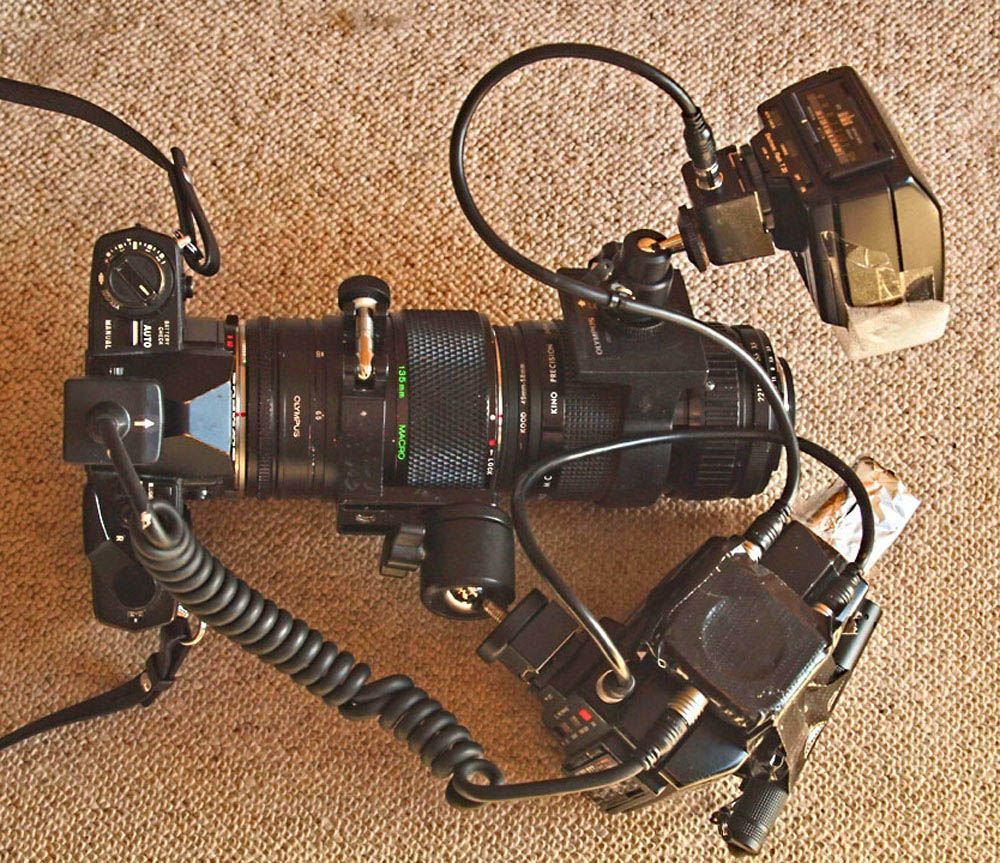 This shows detail such as the modelling light, the diffusers and the mask in the T32 (left): 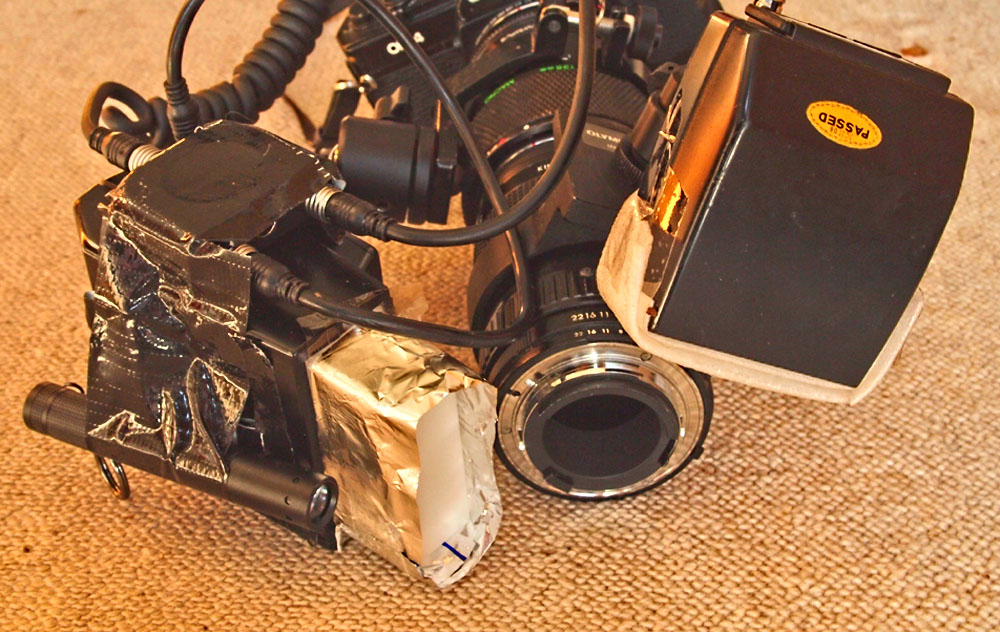 Here is a front view, lamp on: 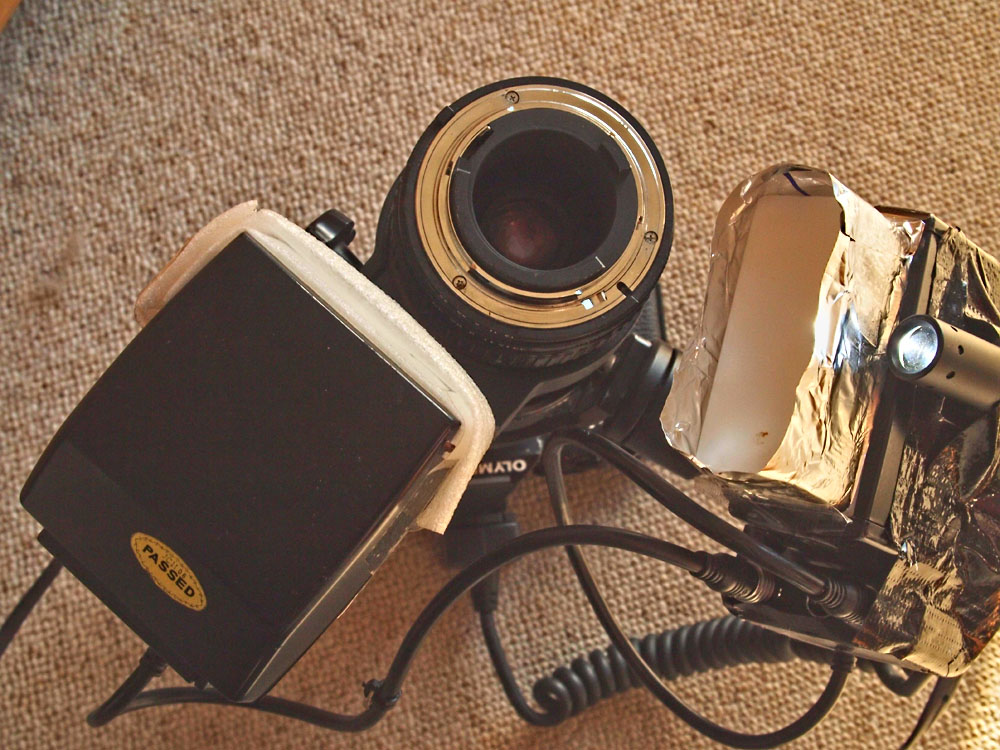 This shows the clamp and mount for the T32: 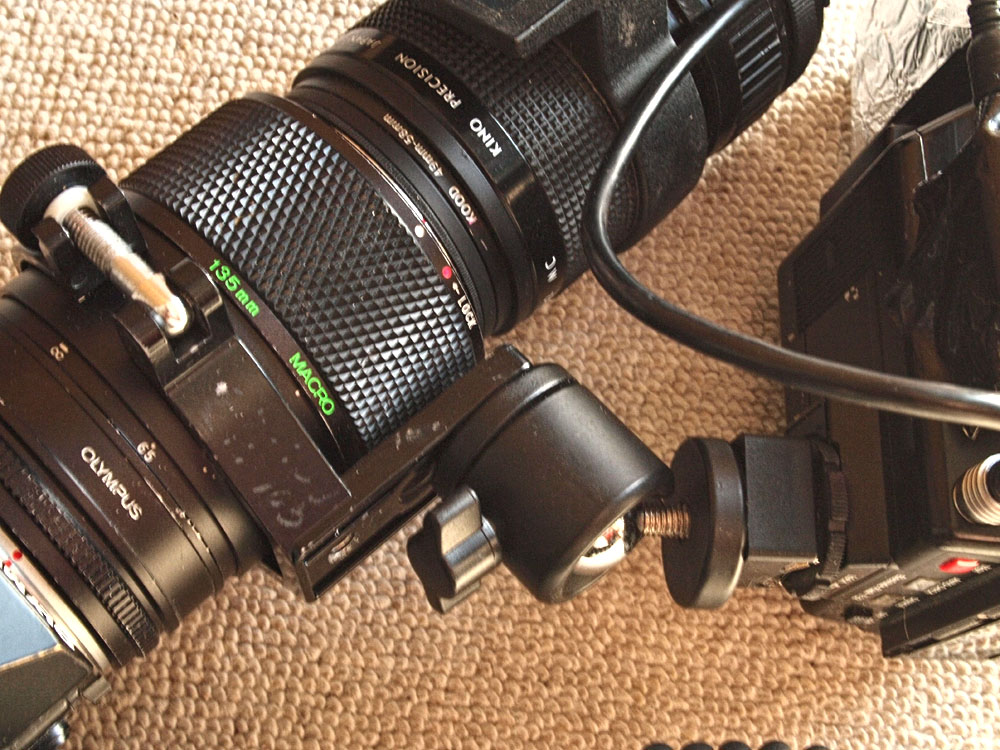 The T20 on its special hotshoe and flexible hotshoe: 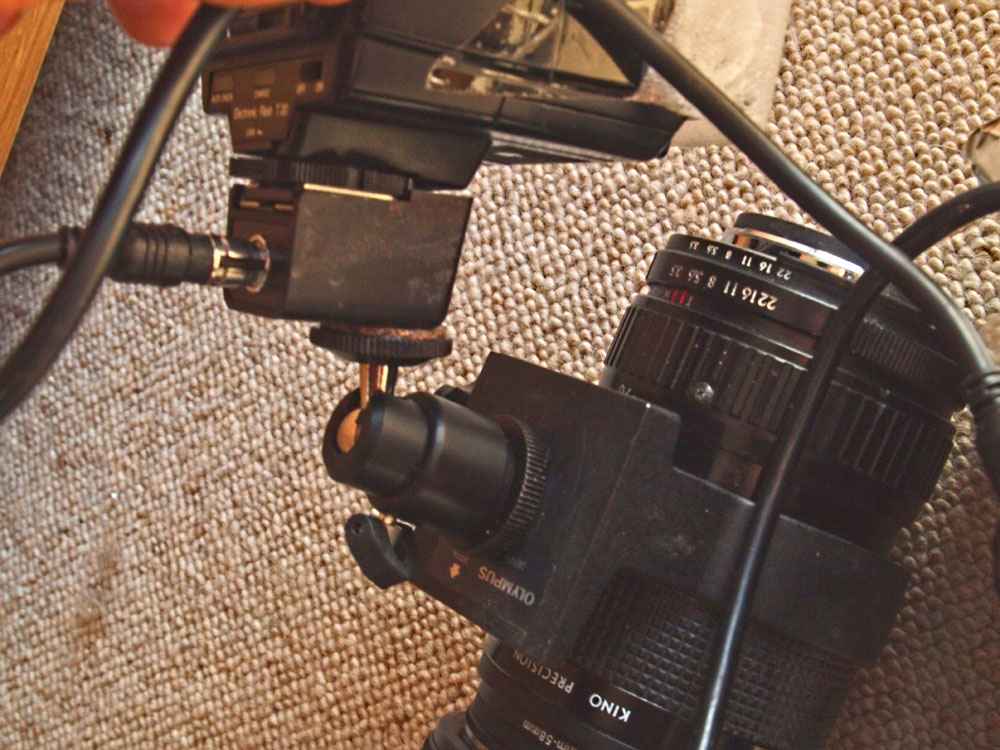 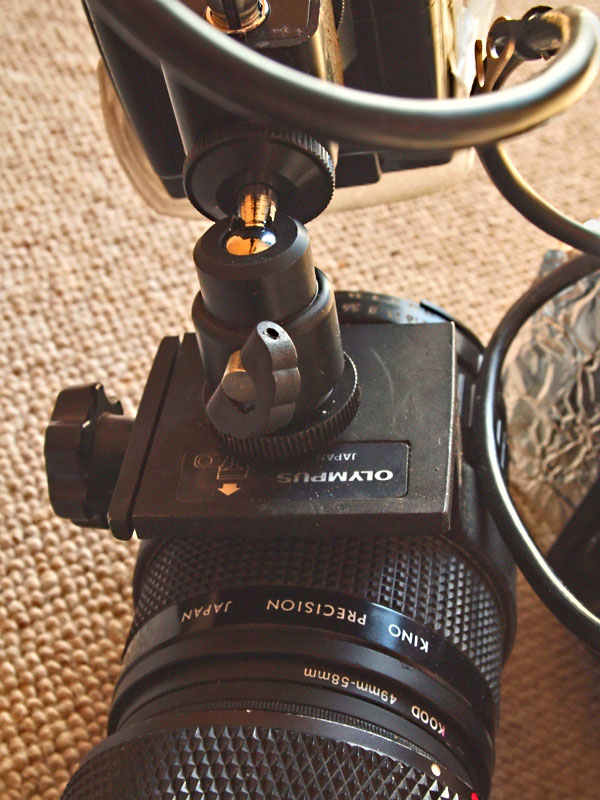 wow! is this what you're handholding to shoot those springtails?
- Ian
"Truth is stranger than fiction, but it is because Fiction is obliged to stick to possibilities. Truth isn't." - Mark Twain
Top

dissent wrote:wow! is this what you're handholding to shoot those springtails?

Yes. I can often place my left hand on the substrate and fine focus by flexing my thumb.

I wouldn't recommend this as an introduction to macro and you can, perhaps, see why I have worked towards this over many months.

The extension would have to be twice as long for the same magnification on full frame or film but I would probably introduce a teleconverter/extender to keep it as a practical setup.

The main difficulty is in framing and the spotlight makes it very much less difficult.

I am wondering what range of magnifications and working distance(s) you get with this, and crucially what the effective aperture(s) are. ?

I've used a head torch for a focus light. Some of them have a focusable very tight beam which helps for getting the subject in frame. Their elastic strap and built-in hinge is of course useful for attaching and positioning.
I did experiment with two, in the manner of a "Dambusters" altimeter - briefly. (You need to have read the book or seen the film

ChrisR wrote:I am wondering what range of magnifications and working distance(s) you get with this, and crucially what the effective aperture(s) are. ?

I've used a head torch for a focus light. Some of them have a focusable very tight beam which helps for getting the subject in frame. Their elastic strap and built-in hinge is of course useful for attaching and positioning.
I did experiment with two, in the manner of a "Dambusters" altimeter - briefly. (You need to have read the book or seen the film

Yes, I considered twin lamps but wanted to try one. I will be ordering another.

I will be using twin lasers (and a third for the camera axis) to aim flash guns is a more comprehensive calibration of my lighter guns for fully manual flash across the magnification and aperture range, primarily for film use.

I have not bothered to work out the effective apertures, as I have worked empirically (aka suck it and see

This looks very promising and stimulates my own thinking about ways to improve my MPE+MT-24 rig.

Currently, for a focus assist lamp (essential at high magnification for me), I just brace a similar LED torch against the camera/lens assembly. With practice it becomes second nature to aim and use the torch, normally carried in my pocket. With your pre-aimed, fixed focus assist light, it should be even easier to use.

Is your torch AA or AAA battery-based? My twin-AA cell torch isn't too heavy, and I get an hour of use out of Eneloop rechargeable NiMH batteries, even though the light is a very bright 80 lumens.
-Phil

At the highest magnifcation (prpbably the others too), the beam from a torch at the camera position just won't get onto the subject, due to the common difficulty of lighting tiny subjects at short working distances.

The way I use mine also acts as a check that the angle of the main flash is near enought to optimum to give correct exposure (more important for film use where I can't see instant results). The beam of the model I use can be narrow with a sharp edge, or about twice as wide with a diffuse edge, this controlled by a push-pull collar at the front.

The torch runs on one AA alkaline. The main requirement of the torch is that the switch is one press for on, a second press for off. (Many such torches are hold-on only, as used on key rings).

The system works very well, althought the positions of the flash guns makes getting the front of the reversed lens close enough to some subjects. For my latest shots * (prime 28mm lens) I took the second flash off and lay it on the substrate (log). I now have some flash triggers, not yet used, which will overcome the physical limits of cable operation.

If I were, for lower magnifications, to use a lens in conventional orientation I could use the T28 unit or just use the T28 ring with the T32 and T20 guns, fired via the hotshoe. All such use would have to be manual exposure.

Here is how I solved a problem of attaching the setup to a lens which did not have a filter thread which would connect directly:

Harold
My images are a medium for sharing some of my experiences: they are not me.
Top
Post Reply Previous topicNext topic
8 posts • Page 1 of 1