This is the best single shot result I could acheive, at about f16 (not labelled below f11) and ISO 400, hand-held. The flower is about 17mm across the petal tips. Leitz Photar 50mm 2.8* on 43mm of extension, including the adapter, crop factor X2, working distance 90mm: 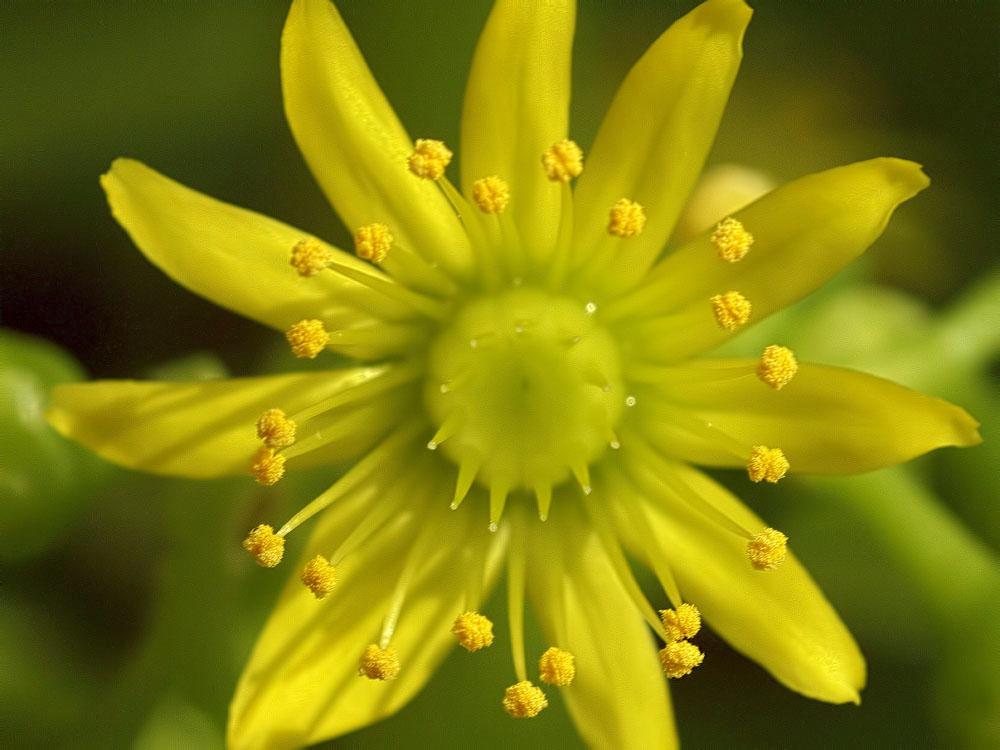 It seemed pretty clear to me that a stack was called for. Also, the lens was not doing its best at such a small aperture and the ISO was not optimal. So I shot a stack of 8 (increments of ca 1mm) at f5.6 and ISO 100. I used a Manfrotto 454 focusing rack on a tripod, with 8 sec anti-shock. 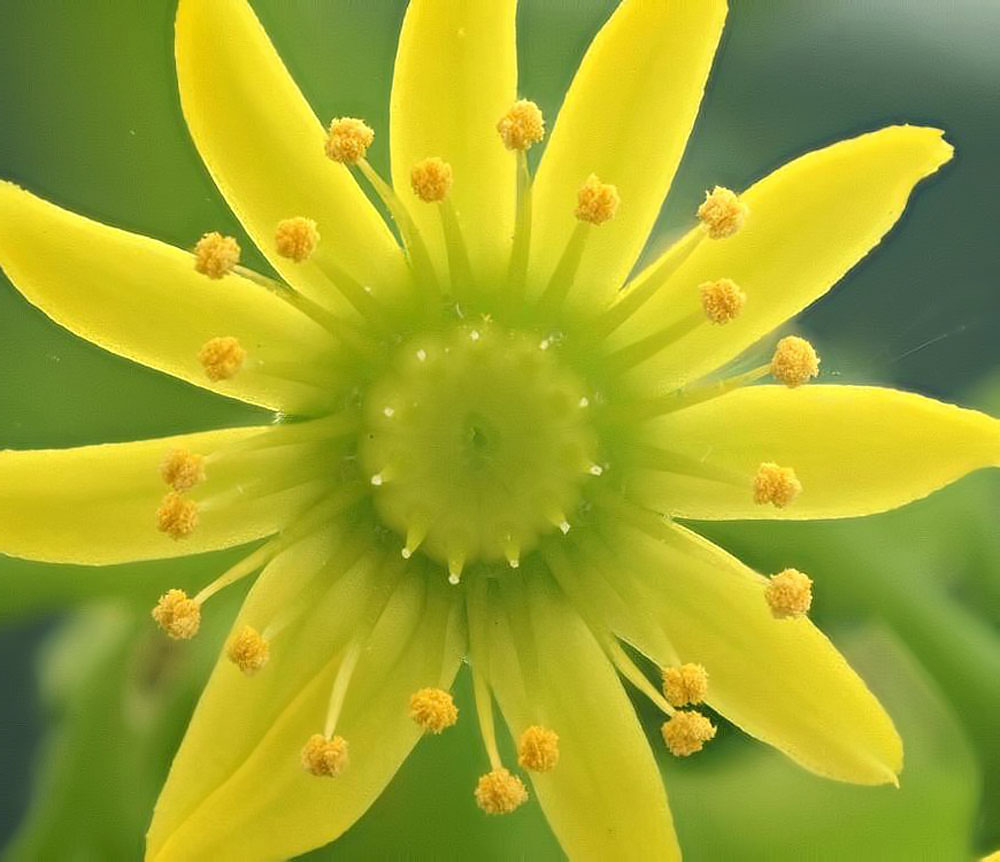 Topaz Interior Strong Detail lets us see through the green mist but the image is not so aesthetically pleasing: 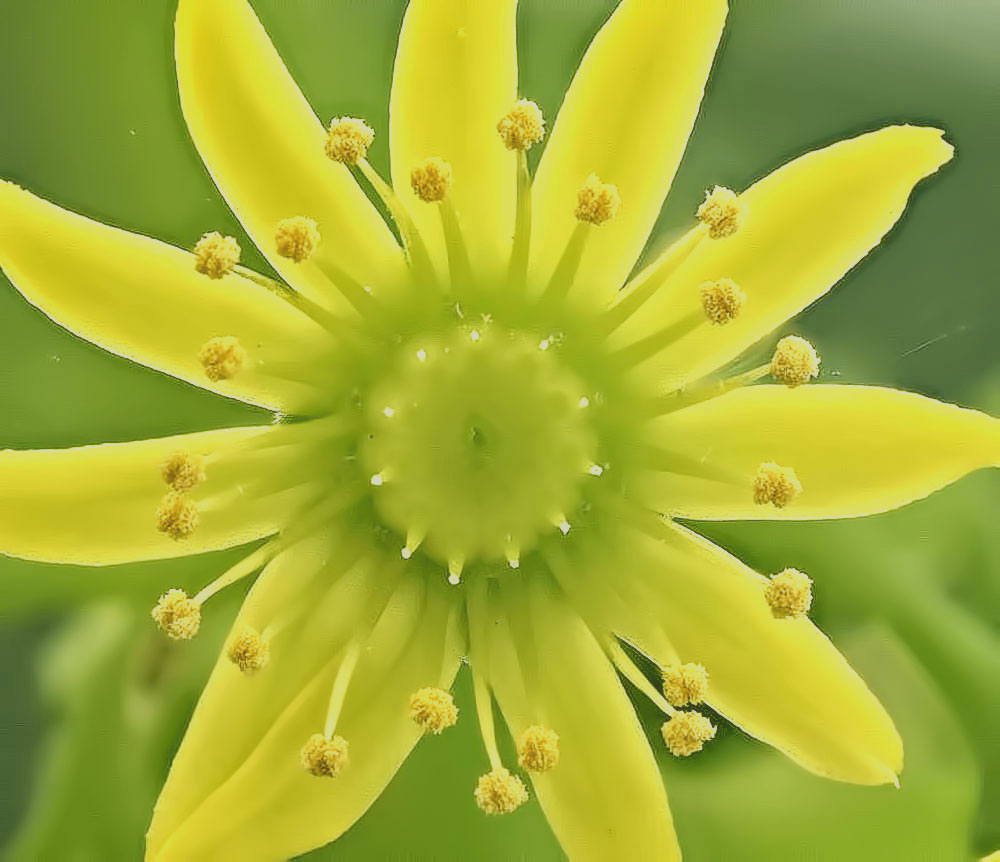 The two images were shot on different days, under similar but different lighting (conservatory, diffused sunlight). I think each has its own appeal.

This is the inflorescence, shot indoors with light from a window facing south. Lens Leitz Elmarit 60mm macro (at f8?): 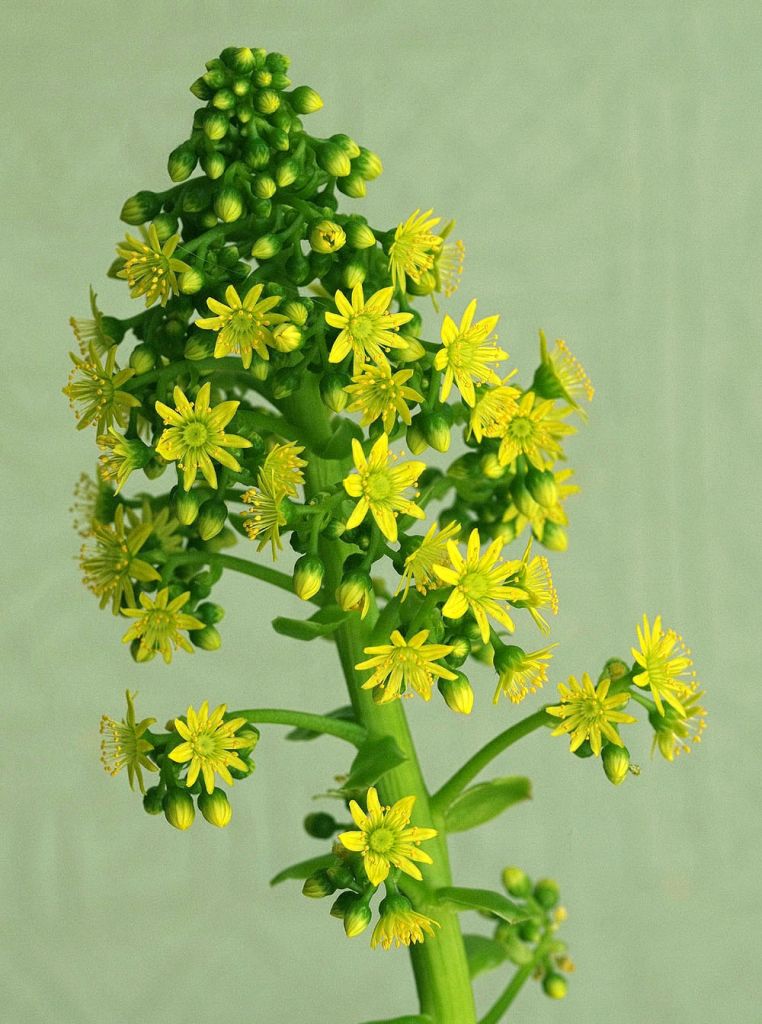 *There is no focusing mechanism on the Photar, such that the support has to be moved, the tripod for coarse positioning and the rack for the stack series.

The species is probably Aeonium tabuliforme, so-called becase the leaves are nearly all in one horzontal plain, suggesting a small table top:

Harold
Last edited by Harold Gough on Sat May 12, 2012 7:40 am, edited 4 times in total.
My images are a medium for sharing some of my experiences: they are not me.
Top

I especially like the last shot. Very nicely composed.

I have added a reworked version of the second image.

My interest in macro started (mid 1960s) when I wanted to record images of my cactus flowers. We are going on a holiday, next month, to be the first one timed to coincide with the peak flowering season at our destination. On the other hand, I had some 35 years of professional interest in insects.

"Wife complain"? - unheard of in this household

The lens is optimised for higher magnifications than this, so I must see what the Elmarit 60mm macro with do with a stack of the flowers.

Harold, I think you have to edit your footer

It seems like you agree better than good with your E-P2.

If you have the opportunity to do another shot with that flower, it would be nice to see how it would work out with a black background.

conkar wrote:Harold, I think you have to edit your footer

It seems like you agree better than good with your E-P2.

If you have the opportunity to do another shot with that flower, it would be nice to see how it would work out with a black background.

The E-P2 does a great job when it does what I want it too. What you don't see is the large number of rejects due to "knocked" settings. Someone in the specialist forum has just obtained an E-P2 and is having similar problems.

It is great on a tripod but hand-held, in the open, where frequent repositioning through all angles in three dimensions is required, the right thumb and index finger can do naugthy things while the subject in the viewfinder needs constant attention.

That said, I picked the ISO and let the camera sort the shutter speed for these posts. I have great hopes for working with flash, now that my experimentation with OM T-series guns is nearing completion. I do, however, prefer natural light where possible.

To the very limited extent that I am a botanist, I also prefer the third image, due to the revelation and texture of the bases of the stamens. On the other hand, the anthers look a bit over-sharpened.

Here is a blend of the two via Zerene Stacker, which I think is a good compromise, if not the best: 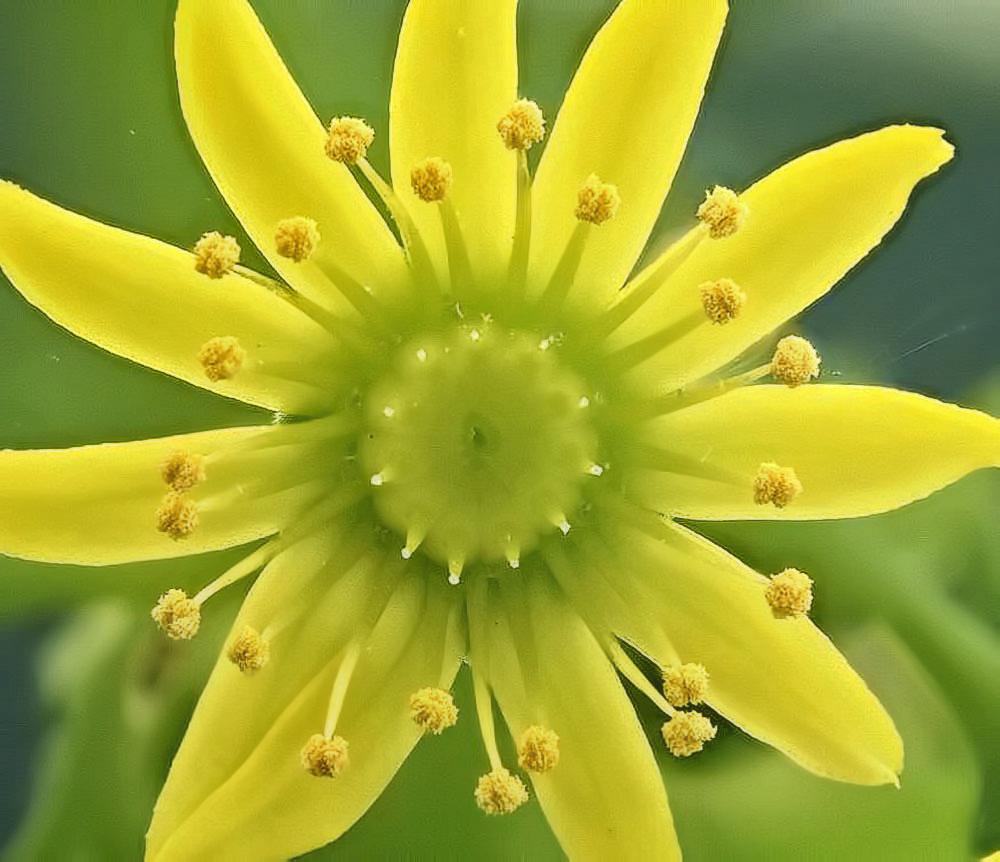 I intend to try again with my Elmarit 60mm macro. I subjued the whitish background by placing a dark green watering can in the background but black would look good, although it would have blocked the light from the previous session! It may not be today (I will be out photographing wild green orchids) but the flowers are opening sequentialy each day.

In the stacked images just above here, I'm seeing some obvious halos around the big petals that would be easy to eliminate using DMap and retouching. If you're interested in that procedure, see the Zerene Stacker tutorials on How To Use DMap and Advanced Retouching. The trick is to adjust the DMap slider so that all the OOF background goes black in preview. That will give clean edges against high contrast background, which you can then merge with the PMax results that are likely to be better in low-contrast areas of the image.

Thanks. I've rerun the stack through Zerene PMax, and this time also through Dmax, the latter with the contrast adjustment. 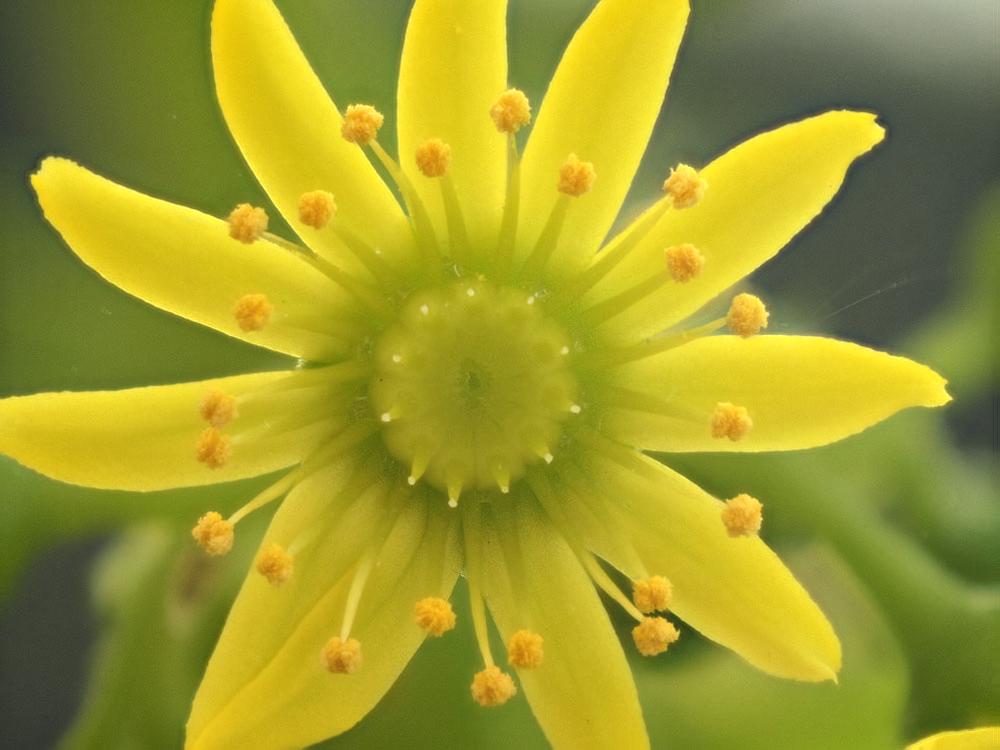 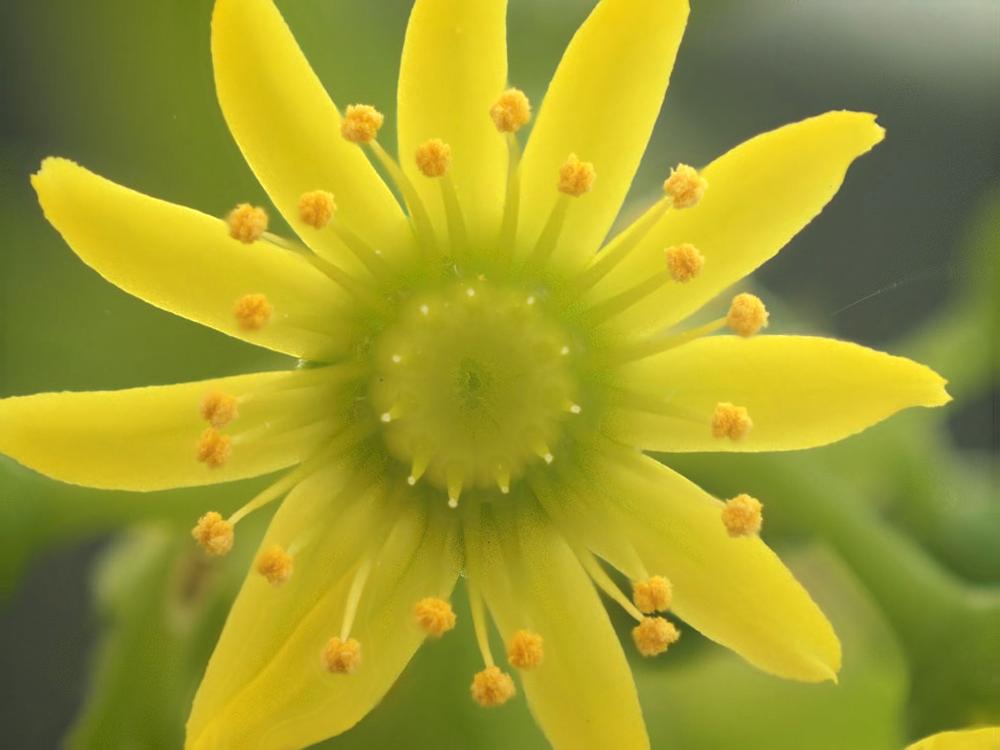 I then ran TopzDetail 2 and Fine Detail Contrast ()forty something)followed by NR by DeNoise to produce these images. 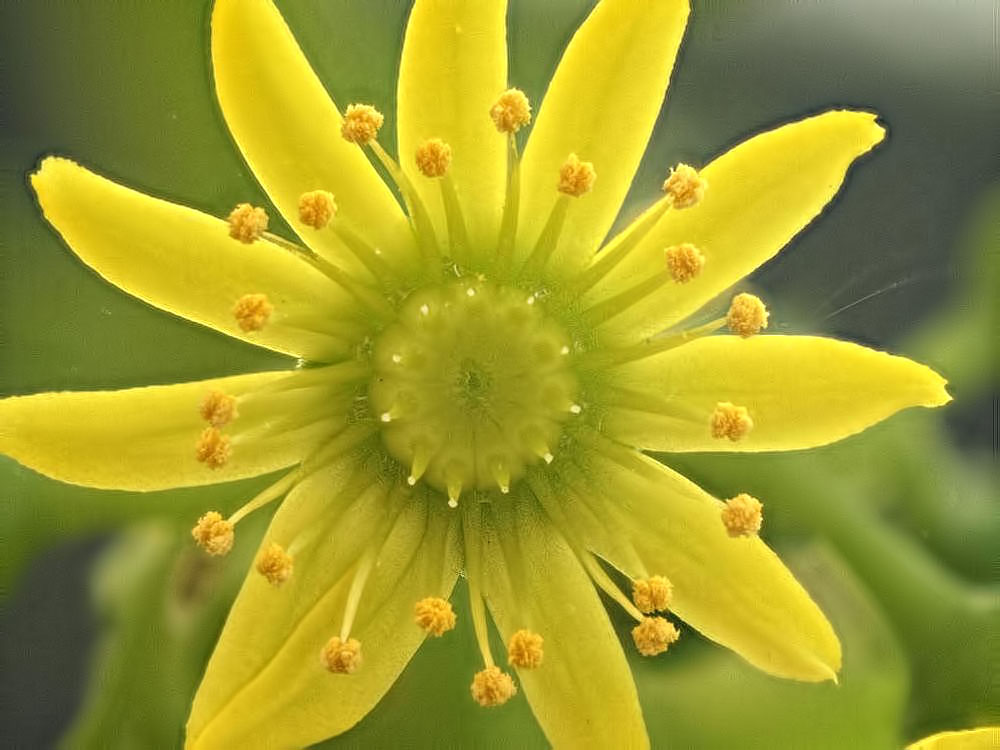 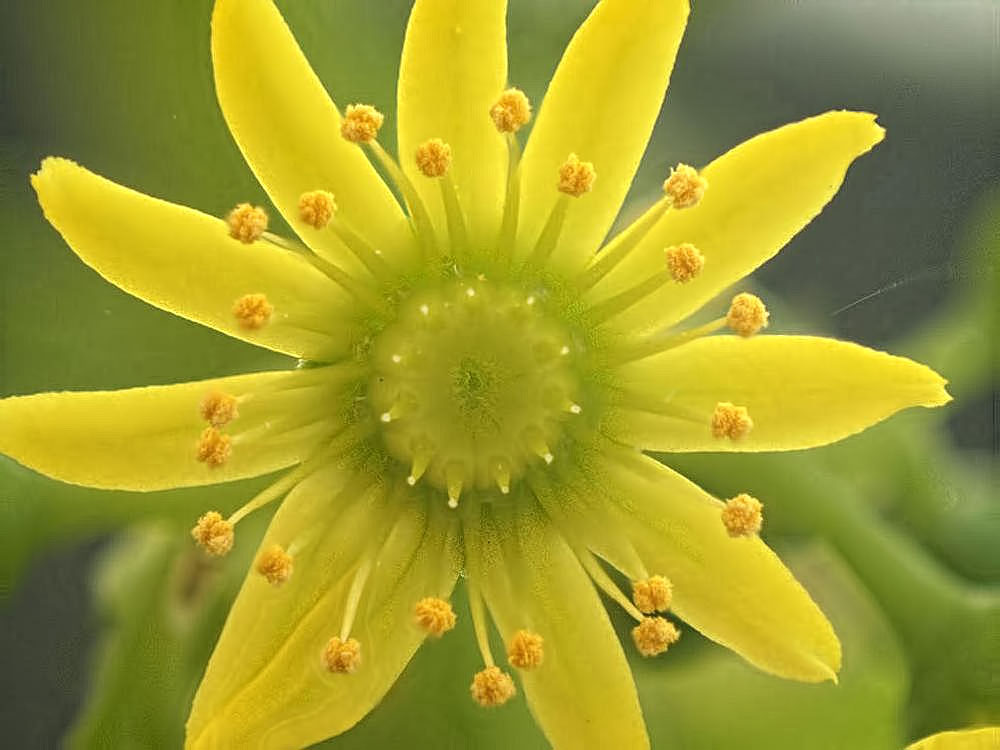 Regretfully, I lack the manual dexterity to retouch in Dmax.

If you liked the Aeonium you may love this:

Your local nursery is a great source of prime subject material.

Yes, the lotus maculatus are lovely.