Pushing the limits of B&W macrophotography

Pushing the limits of B&W macrophotography

My scientific work requires B&W photos at low to medium magnification, so I have been working hard on developing techniques to get the highest-res B&W photos possible with "ebay technology".

Since the end product is a black-and-white image and my subjects are basically white preserved specimens, I can completely eliminate chromatic aberrations by using perfectly monochromatic laser light. This must be despeckled; I use my milk method (more on this later).

To maximize resolution I choose short-wavelength light. (The amount of blurriness caused by diffraction in a perfect lens is proportional to wavelength and f-number.)

To make best use of this monochrome light I use ultra-high-resolution photolithography lenses optimized for short-wavelength blue or violet monochromatic light.

To eliminate the resolution loss caused by Bayer filters (which block blue light from 3/4 of a normal camera's pixels), I use a monochrome mirrorless astrophotography camera. There are now reasonably-priced astro cameras with 19Mp {edit: 16Mp when this was written; now up to 20Mp) Micro-4/3 sensors. I use the QHY163M.

To reduce the noise associated with high-pixel-pitch sensors, I cool the sensor down to -10 degrees C, which this camera does easily.

To minimize errors due to wandering rail syndrome (unexpected jumps, sidewise drift after each movement) I use William's newest WeMacro rail and controller, which seems to be much more stable than my copy of the Stackshot.

So today I got everything working together for the first time. I am very pleased with this first stack, even though there are still some problems to solve. For this test I used the Nikon Engineering 1/5x photolithography lens, reversed. This is a virtually unknown lens with no internet information, but it appears to be a successor of the famous Nikon Ultra-Micro-Nikkors, and it has some nice features, especially its working distance of 18mm, and its image size of at least 50mm. It also seems to be telecentric.

Here is a portion of the full frame. I had accidentally set the capture area to less than the full frame (I'm still new at the capture program, Sharpcap). It is worth noting that the actual aerial image would require a 200Mb sensor to capture the full image t this resolution. I have built an x-y shifting device to move the camera around on the aerial image and capture all of it at this level of detail, but I haven't tried it out yet. 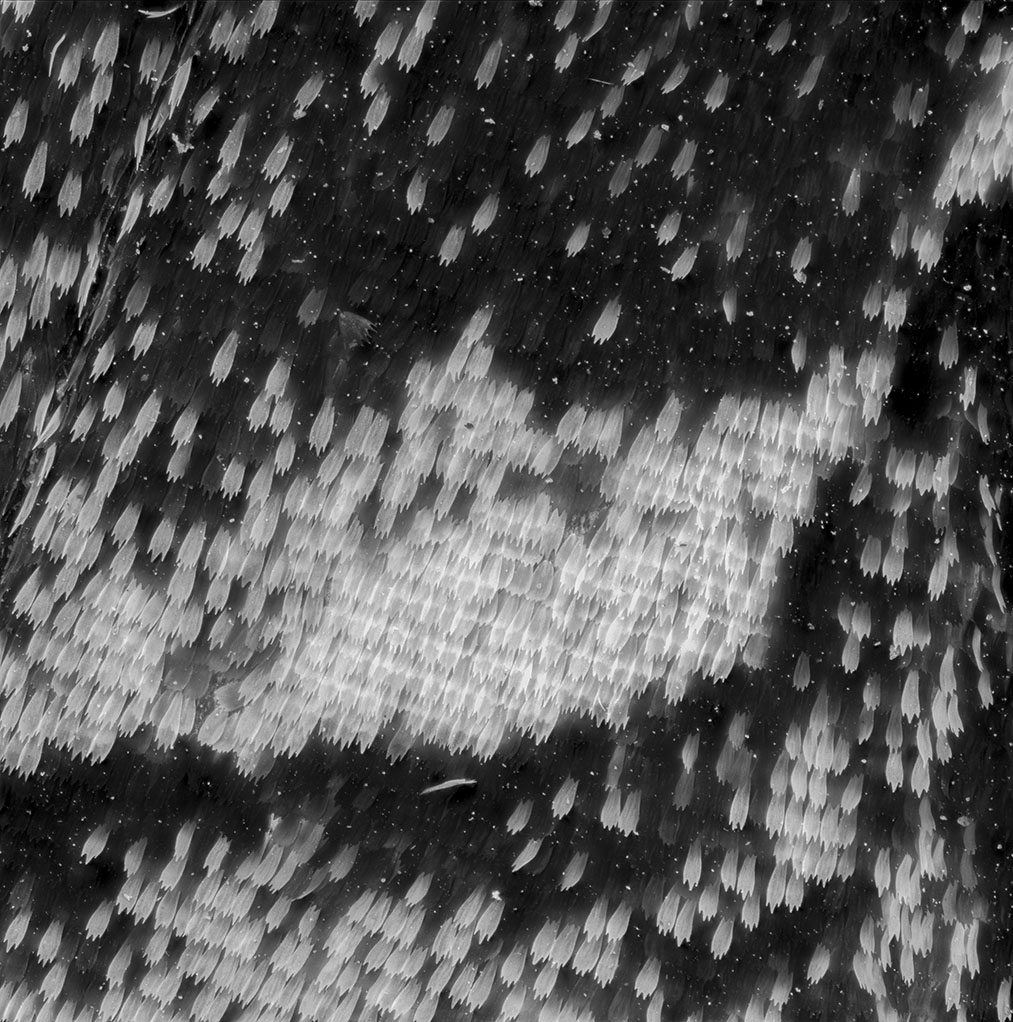 To see the high resolution of this image, here is a 100% crop, followed by a 200% crop and a 400% crop. The butterfly scale ridges are only about 1 pixel apart (they would not even be visible on a sensor with a lower pixel pitch) yet they are resolved nicely. (Note that these are really small MFT pixels; the 400% crop is equivalent to a 560% crop if this same aerial image had been captured on a Sony AR7II.) Edit: note that I have used some very mild Photohop sharpening, exposure, and contrast adjustment on these. 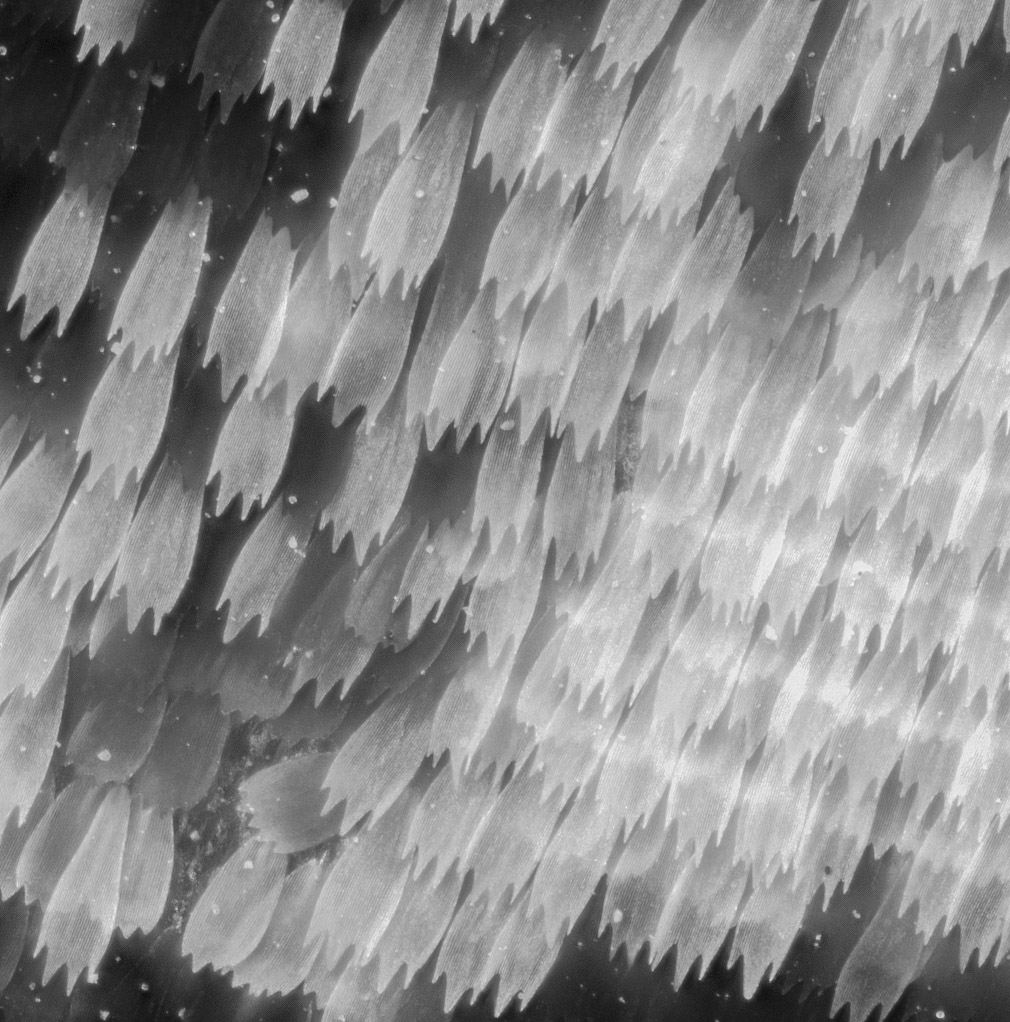 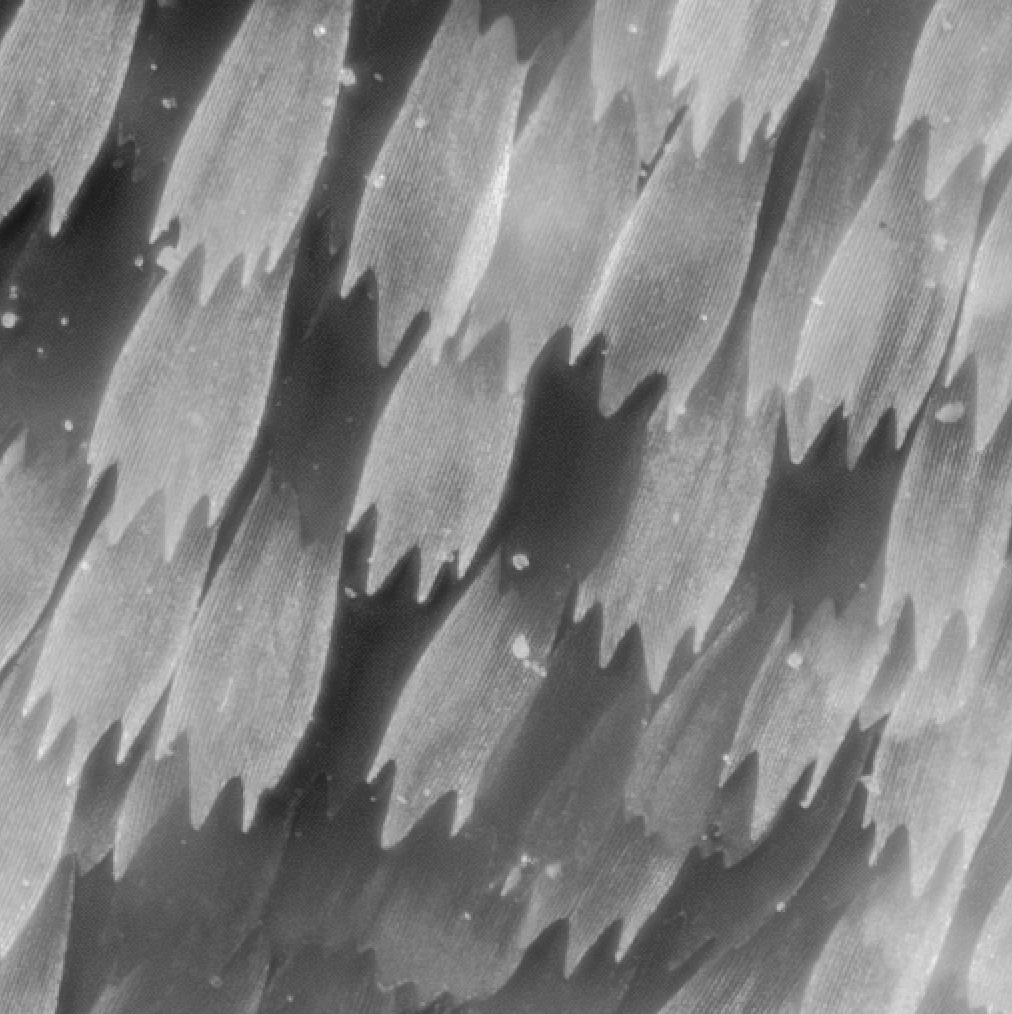 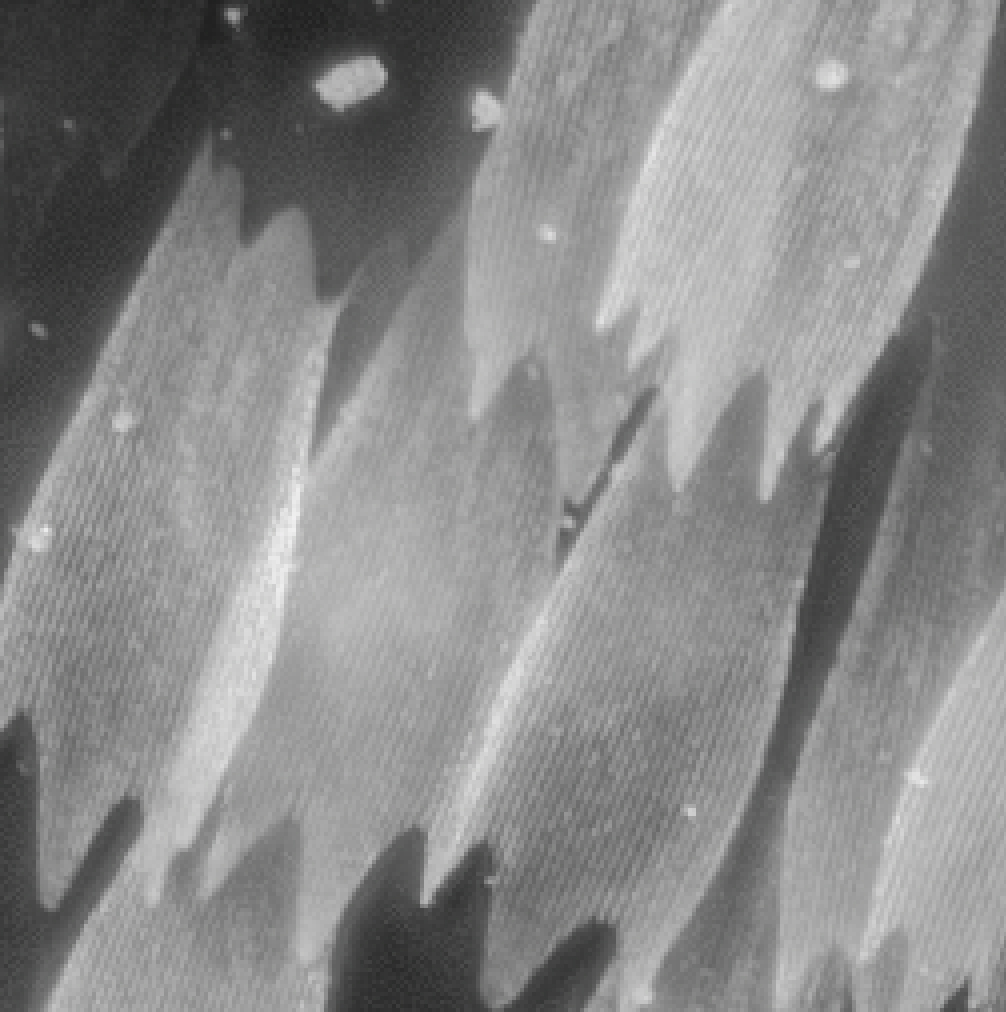 Here is the set-up: 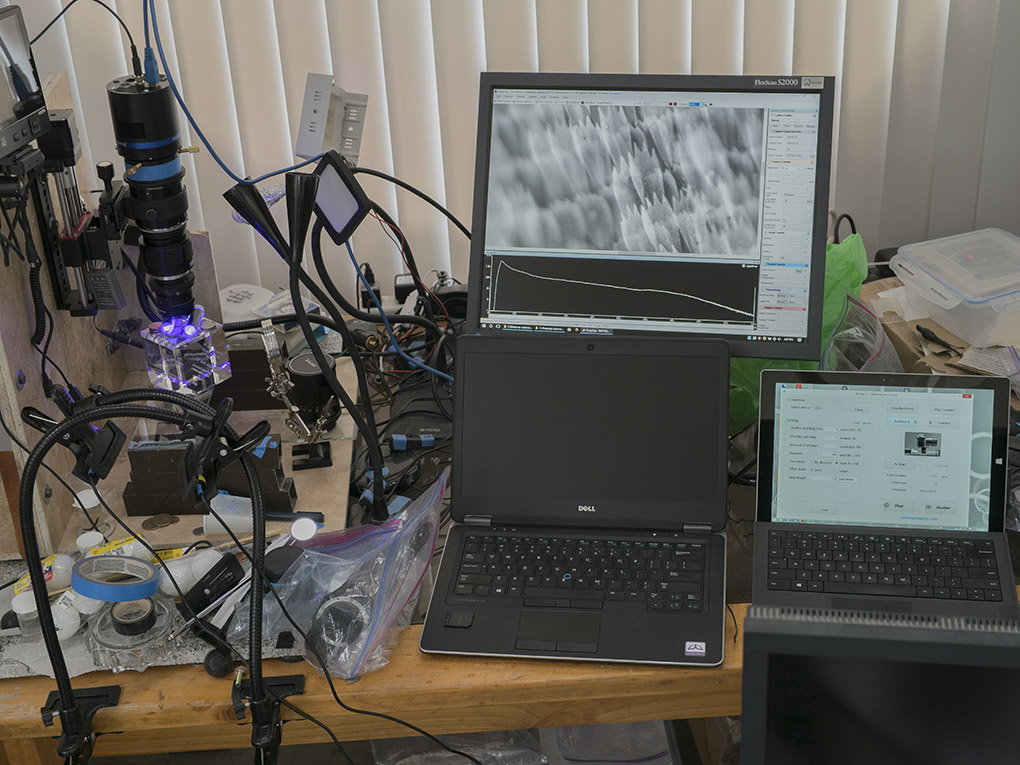 The laser de-speckler tubes are key elements. All the light that shines on the subject is scattered out of these tubes; no laser light should hit the subject directly. These scattering tubes are glass vials which I spray-painted white after masking off a quarter of their surface (and the vial bottom) with tape to keep them clear. These vials are filled with dilute milk. A laser beam from a distant laser enters from the bottom and goes through the central axis of the tube. The milk scatters a fraction of that beam sideways, and in so doing, it randomizes the interference pattern during the exposure because of the milk particle's Brownian motion. I mask the top half of the tube with black tape so it doesn't cause lens flare. I cap the vial with aluminum foil because the paper sealing pad on the cap fluoresces. All the light comes out of the strip of tube that did not get painted white. 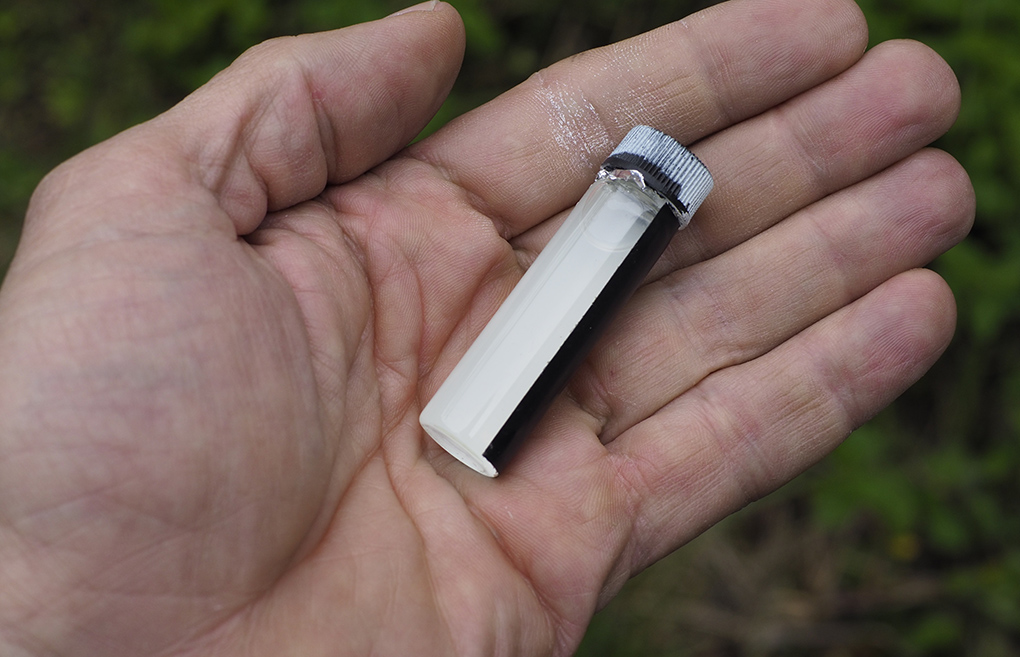 NO PAPER DIFFUSERS CAN BE USED ANYWHERE IN THIS SET-UP!!! Most papers fluoresce a light blue, ruining the monochromaticity.

In this case I used a pair of easily-available 405nm lasers. Based on my internet research I think that my lens is optimized for this wavelength, though there is no indication on the lens itself. More lasers would be better; laser speckle patterns average out across lasers, so if you had lots of lasers you might not even need a de-speckler system.

The results can still be improved by making full use of astrophotography techniques--taking multiple frames per slice and averaging them, and subtracting out the mean noise by taking dark frames.
Last edited by Lou Jost on Sun Jun 03, 2018 12:22 pm, edited 10 times in total.
Lou Jost
www.ecomingafoundation.wordpress.com
www.loujost.com
Top

Here is a better view of the de-specklers in action. The laser beams are entering the vials from their bases. The milk concentration is chosen to allow the beam to get through the whole vial. The light looks white just because it is so bright and has maxxed out the sensor. (Exposure time was 150ms.) The butterfly wing is between the vials, and held flat by the washer and the coins, and is mostly not visible in this picture. 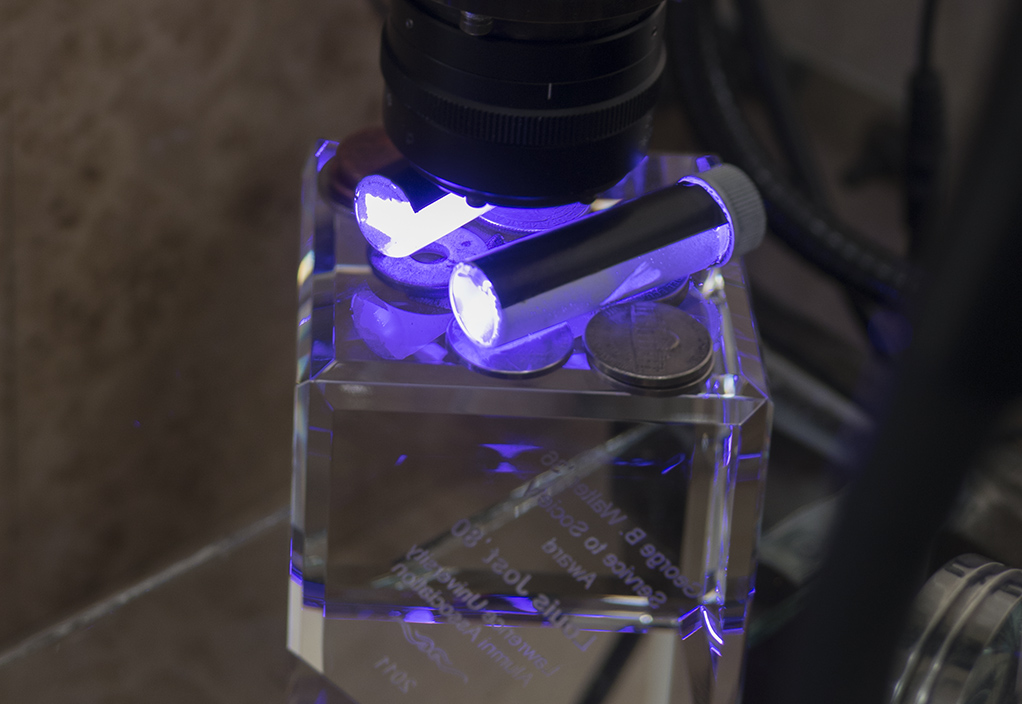 By the way, when I bought this lens months ago on eBay, it was one of two being sold by the same seller. The other one is still sitting there:
https://www.ebay.com/itm/1pc-NIKON-ENGI ... SwrYRZlk5E

I would not recommend it for color work but it seems like a stunning performer if you use it as intended and can take advantage of its huge image circle. It is a weird lens though. The aperture-setting ring has numbers whose meaning is not obvious. To open it all the way, you have to turn the ring to "2.4". To close it down you turn it to "1". I use it between "1.5" and "2".

I should add that I have not yet measured the image circle carefully....only a rough measurement by eye....

Edit: I just noticed that the lens which I didn't buy is slightly different than mine, in that the aperture ring goes from 2.7 to 1 instead of 2.4 to 1. And instead of "2.4" it has "2.5" . No idea what that means, since these are not f-stop numbers and actually decrease with smaller apertures. Also it says 1/5x where mine says 5x.
Last edited by Lou Jost on Fri Dec 29, 2017 3:14 pm, edited 3 times in total.
Lou Jost
www.ecomingafoundation.wordpress.com
www.loujost.com
Top

Wow! it seems that you're really pushing the limits.

I'm sure that you're aware, but, safety first, this lasers must be really dangerous as strong violet radiation is, protect your eyes with the adequate materials

Thanks for the warning. I do have UV goggles but didn't think to use them with this blue light....
Lou Jost
www.ecomingafoundation.wordpress.com
www.loujost.com
Top

Buy good orange protective lab googles, strong blue is also dangerous, beware that the eye sensitivity to blue is much lower than for green, so you don't see how intense really it is. The fluorescence microscope light shields are in most cases orange for this reason.
(in the picture it looks violet and the lasers used in confocal microscopy are about 400nm although people often call them UV as they substitute the near UV typical in traditional fluorescence microscopy)
Pau
Top

My UV goggles are transparent, not orange, so they won't help me here. Thanks for the tip!
Lou Jost
www.ecomingafoundation.wordpress.com
www.loujost.com
Top

Sorry to be pedantic but I want to point:
- 405nm is violet, in fact deep violet, not blue
- All eyeglasses must be transparent, yours -and mines- are colorless.
Pau
Top

Pau, so I should have said my goggles are completely transparent. Orange protective eyewear is included with many blue or violet lasers; those glasses are not completely transparent to all colors of visible light. See for example:
https://www.ebay.com/itm/New-Aluminum-1 ... Sw7ChZeBKQ
Those are the ones I should get!!!
Lou Jost
www.ecomingafoundation.wordpress.com
www.loujost.com
Top

Well, the orange glasses are transparent to certain colors and opaque to blue, while your milk emulsion is translucent
https://en.wikipedia.org/wiki/Transpare ... anslucency

I recommned you orange eyeglasses (the ones you linked seem red) and be sure they are made of polycarbonate: it cuts off UV very effectively and is harder and stronger than most other plastics
Pau
Top

I should add that I take the pictures as .fits files (the most common astrophotography file format) and batch-convert them to 16 bit .tif in the somewhat annoying ImageVIEWca program. Can anyone suggest a better program to batch-convert these files?
Lou Jost
www.ecomingafoundation.wordpress.com
www.loujost.com
Top

Hi
It is very interesting to follow your work!

If you only want to capture the violet/blue light and the subject emitts other colours you might want to use a filter (after the objective) to cut of the light with longer vavelength than violet/blue.

Thanks JH, yes, if the subject itself fluoresces, a filter would be needed. Luckily my subjects do not fluoresce. In that case it is better to use monochromatic light from the beginning rather than filtering the output of a broader-spectrum light. The lenses I use for this have a very narrow acceptable color range, only +/- 5nm. A normal broad-spectrum source will emit very little light in such a narrow band. With laser light I can get exposures of 1/4- 1/20 sec, which is very good.

Also filters can degrade the image if the lens design does not expect them.
Lou Jost
www.ecomingafoundation.wordpress.com
www.loujost.com
Top

An interesting advantage of this monochromatic-laser technique is that it eliminates chromatic aberrations for any lens, so it turns ANY lens into what is effectively a super-apochromatic lens (in the sense that there are zero color aberrations). This is not the case when simply converting a color image to B&W, or converting a single channel of an RGB image to B&W, or using an ordinary single-color lamp or a typical broad-band color filter (though using a narrow-band interference filter would work, albeit giving much lower light intensities). In those more traditional techniques, there could still be some small amount of blurriness in the B&W image caused by colors not all being perfectly in focus at a given point. Use of a monochromatic laser light source eliminates this blurriness. So for B&W photography, it seems worthwhile to use laser light, and to work more on improving milk de-specklers, since de-speckling is needed to make laser light useful in photography. A good next step would be to make despecklers in different shapes so they fit more easily between the lens and subject, and to find a preservative that keeps the milk from spoiling so we don't have to mix up a new batch every day. Maybe there is an inorganic substance that works just as well.

It could be that some lenses which we don't regard very highly might actually be super-sharp when used this way.
Lou Jost
www.ecomingafoundation.wordpress.com
www.loujost.com
Top

Lou Jost wrote:
Also filters can degrade the image if the lens design does not expect them.

Regarding fluorescense I have no knowledge about your very interesting micro-orchids. But for your test subject -butterfly scales - you might want to try a filter IF you only want the sensor to record blue/violet light. I did not have any problems photographing butterfly scales when I used uv led light for excitation and a filter to block the uv light from reaching the sensor. It might of course be different with your laser.