As I understand your goals, you're looking for optics that are:That's a challenging combination! (Somehow I'm reminded of the old saying: "Good, quick, cheap. Pick any two.")

Those Mitutoyo objectives you link to are certainly reproducible and high quality. But they're listed at over $1000 apiece and it's not clear how far you can push the magnification & coverage. Edmund Optics (for example) also offers numerous other telecentric lenses covering a range of magnifications and sensor formats, but they are even more expensive than the Mitutoyo objectives.

On the other hand, the level of telecentricity provided by these lenses is probably overkill for your work. They are designed for non-contact gauging applications where it's important to make an accurate measurement even when the subject is noticeably out of focus. For your work, what's needed is less stringent: the change in scale with distance must be negligible only within the range of DOF that the stacking software can discriminate reliably.

So I'm pretty sure you're going to have to assemble your own optics, using the tradeoffs that make most sense for your applications. I'll talk with you offline about this. There are too many issues to discuss efficiently in the forum.

any advantage for ordinary use?

Rik, would a telecentric system offer any advantages for non-stitched stacked images.

For example, if it allowed disabling automatic scale adjustment (which I am assuming is a re-sampling operation) would it give better detail?

For another guess, by eliminating the "seeing around the foreground effect" would it reduce halos or other artifacts?

Have you tried comparing telecentric versus ordinary system on other subjects (flies with bristles for example)?

Re: any advantage for ordinary use?

I don't know for sure, but maybe it says something that I've never bothered to set up a telecentric system except for experiment and for stack-and-stitch.


For example, if it allowed disabling automatic scale adjustment (which I am assuming is a re-sampling operation) would it give better detail?

In theory yes, in practice questionable. The catch is that telecentric lenses use glass farther from the optical axis than ordinary lenses do. That degrades quality too, so it's really a question of which one is the bigger hit. It's not something that I have specifically measured, but taking a quick look at one earlier test just now, my gut feeling is it's a wash.

BTW, there's a trick to reduce the impact of resampling if that is a concern -- just upsample by 2X before stacking and keep the image at the higher resolution after that. Again, I've never done that except as an experiment.


For another guess, by eliminating the "seeing around the foreground effect" would it reduce halos or other artifacts?

Sorry, but there's not much effect on these aspects.

At the same aperture, telecentric lenses see around the foreground just like ordinary lenses do. The only difference is exactly how foreground and background line up.


Have you tried comparing telecentric versus ordinary system on other subjects (flies with bristles for example)?

I have not run any tests of that aspect at same magnification. One of my test subjects (the June Beetle) is pretty hairy. The telecentric stack-and-stitch image ended up much better than anything I had been able to do earlier with a single stack, but it was shot at much higher magnification to start with, and being able to do that was the purpose of the telecentric setup.

Will be in touch soon to look at options.

Yes...a difficult task partly because we do want to make this affordable for someone without a big research budget and/or lab to support them. That does through a big wrench into things. But...if we can find a good solution, then it might benefit a wide range of people.

Here is a set of initial tests to examine the existing parallax with images taken with the Canon MPE 65mm...and also test to examine some telecentric lens combinations to lessen the parallax effects.

Special thanks to Rik for his help!

More to come as we continue to test different lens combinations and dial the settings in better.

I'm glad to see that you're having success with this approach. Looking at the results you currently have posted, the achromat is still a bit too close to the MP-E 65. For perfect telecentricity, the rear principal plane of the achromat needs to be exactly one of that lens's focal lengths away from the entrance pupil of the MP-E 65. According to best measurements I've seen, the MP-E's entrance pupil sits a constant 24.5 mm behind the front of the lens barrel, so the 50 mm achromat should be sitting 25.5 mm in front, not the 18 that you currently have it.

Notice also that the MP-E 65 combined with the 50 mm achromat has a minimum magnification that is quite a bit more than 1X -- actually more like 3X according to your pictures. To have the minimum effect on magnification range, you want to use an achromat that can be placed close to the subject while still being one focal length away from the MP-E's entrance pupil. At the MP-E's 1:1 setting, its entrance pupil is naturally about 125 mm away from the subject, so something like a 100 mm achromat would be appropriate.

But further... At low magnifications, there are other lenses with much more attractive positions of the entrance pupil to start with. For example the Canon EF 100mm f/2.8 USM Macro set at 1:1 has its entrance pupil clear back at 181.5 mm from the front of the lens. Taking advantage of working distance in front of the lens, that would permit something like a 250 mm achromat at close to 1:1. Adding tubes behind the Canon should easily extend its on-sensor magnification to 2X, and will not change the entrance pupil location.

So I'm thinking that to cover the whole range of 1-5X delivered, you'll probably be best off using two different prime lenses, and perhaps a set of three or four achromats.

I look forward to further results.

Many thanks to Charles Krebs for entrance pupil measurements on the MP-E 65 and Canon EF 100mm f/2.8 USM Macro!

By the way, for Gene this posting duplicates information that he and I have discussed by email. I'm posting a summary here for the benefit of other readers.

I'm just adding a couple of diagrams that may make the concept of "telecentric combo" simpler to understand.

First, here is a conventional non-telecentric lens. The WinLens3D ray trace is for a generic 100 mm telephoto lens (WLTL003), extended to give 1X magnification (subject at left, image at right). This is qualitatively similar to how some macro lenses behave at their 1:1 setting. The entrance pupil is significantly in back of the physical aperture, but is still someplace inside the lens. Notice that the axes of the ray cones are not parallel at the subject. In a single image or stack, this means that magnification will change from front to back. If you try to do side-by-side stitching using this lens, you'll get parallax errors along the boundaries.

Now, here is the same main lens, but augmented by the addition of a large but weak achromat at the proper position. In this case the added achromat is 350 mm focal length, chosen to place it fairly close to the subject and 350 mm in front of the main lens's entrance pupil. The effect is to push the combo's entrance pupil to infinity and slightly redirect the ray cones so they are parallel on the subject side of the achromat. With this combo, there is no change in magnification from front to back, and you can do side-by-side stitching without getting parallax errors.

I'm tempted to try showing what happens if you attempt to get more working distance by making the added achromat stronger and moving it closer to the main lens. But that story gets longer, more complicated, and less satisfying than I have time right now to explore, so I'll stop here.

I would like to add a picture of a picture from the combination of the Canon 100mm Macro USM with a +5 achromat. I just got such a diopter lens and had to do a quick and dirty test photo of my mm-grided cutting mat. 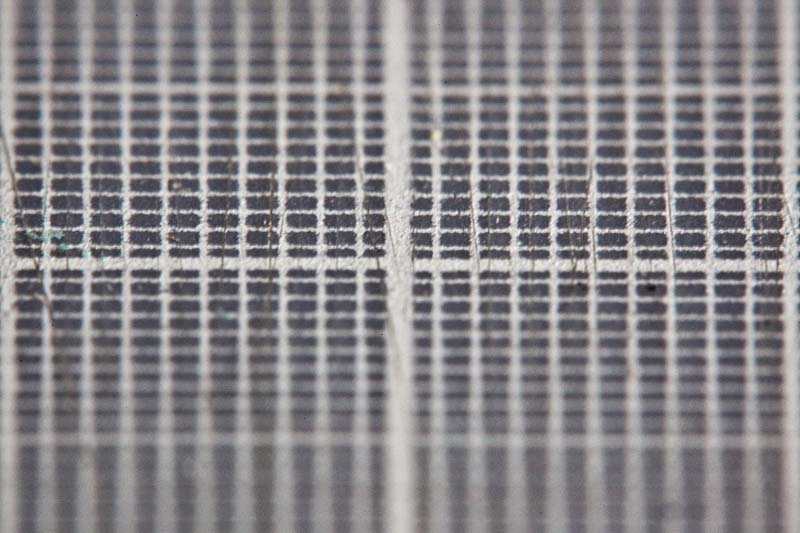 This combination has been mentioned here before, with an external link where a now obsolete +5 lens was used. I cannot find the link anymore.

The lens was used on my 5D mkII at maximum magnification. The resulting magnification of the combination seams to be 1.8X.
The picture was taken handheld with the lens supported against the mat.

I have not yet verified the sharpness of the setup. Can I ask for ideas about suitable targets for such a test, please?

Ulf W wrote:combination of the Canon 100mm Macro USM with a +5 achromat

Very nice! This combo as it stands is close enough to telecentric that it could be used for stack and stitch. It could be made perfectly telecentric by using a spacer ring to move the added achromat a few mm farther away from the main lens.


I have not yet verified the sharpness of the setup. Can I ask for ideas about suitable targets for such a test, please?

My usual choice is a moth wing. They are fairly flat and rich in fine detail. Fine sandpaper can also work well, see for example HERE. (Thanks to ChrisR for the sandpaper suggestion.) Use diffuse illumination in either case as both subjects can be quite shiny at high magnification, resulting in specular highlights that can be misleading.

If you slack off on the Canon's magnification setting in an attempt to restore 1:1 magnification, then the entrance pupil will move forward and the combo will be less telecentric.

This is what I expected and found while testing, but I chose to just publish the most telecentric picture.


It could be made perfectly telecentric by using a spacer ring to move the added achromat a few mm farther away from the main lens.

I will try that by keeping my UV filter on, and possibly add more spacers between diopter and lens. Thank you for the suggestion.

Here come a few more pictures for the +5 and EF 100mm USM Macro lens.
I have printed a better test pattern on a good quality Archival Matte paper with my Epson printer.

First, an image with the same setup as my last picture, but using the new target.
+5 Achr. directly on Canon 100mm USM macro At 1x f/32.jpg.JPG 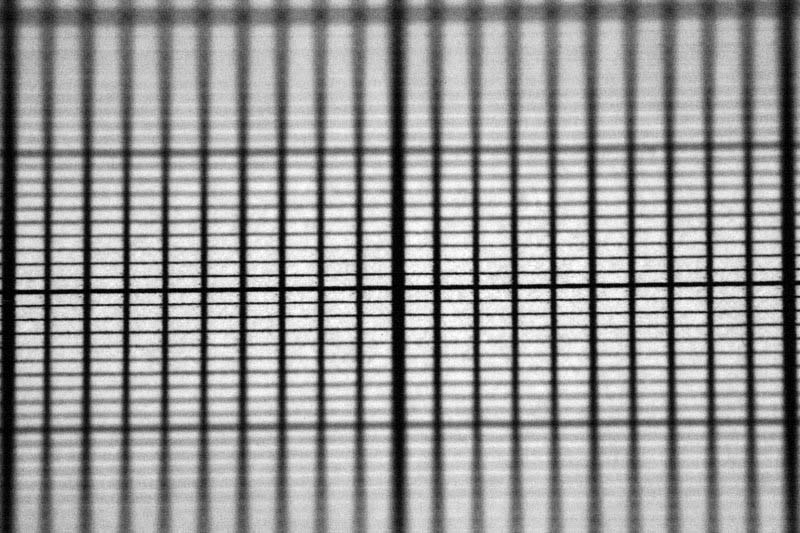 For the two successive pictures, I just put one and two UV-filters as spacers.
They add 4mm each, between diopter and objective.
I do not think the filter glass will affect the telecentricity much, even if it is not optimal optically. 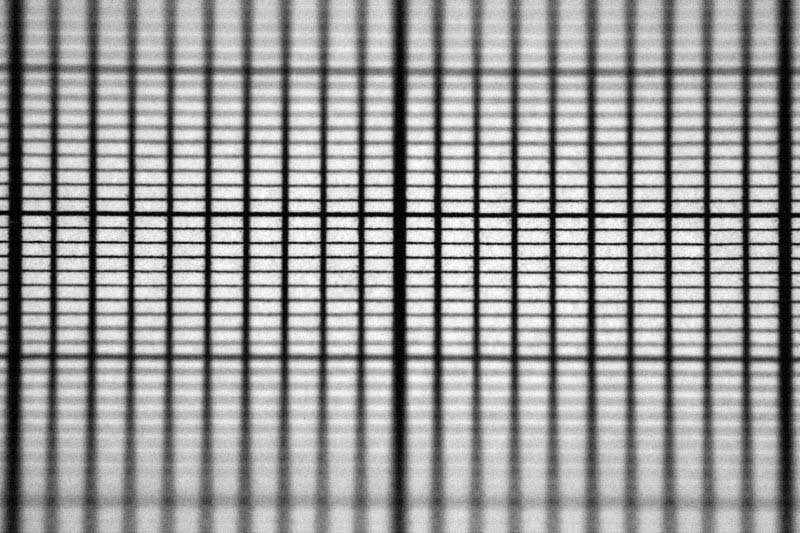 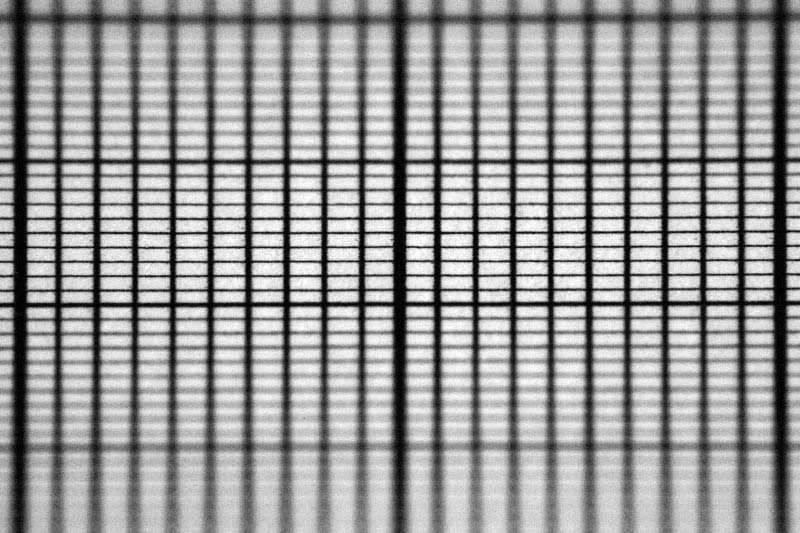 The sweet spot for this for his objective according to DP Review is around f/8
http://www.dpreview.com/lensreviews/wid ... on.xml%3F2
It is not defined wether this is at infinity or 1:1

The setup with a 8mm spacer at f/8 looks like this: 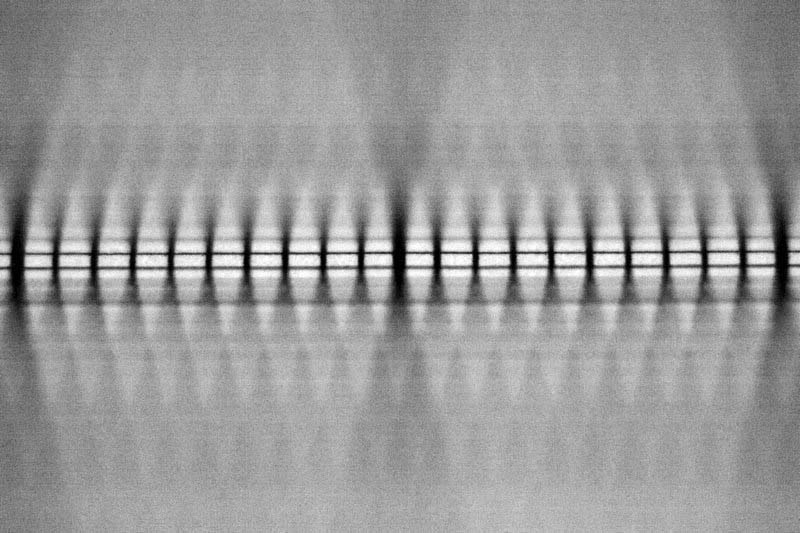 Finally, an image with the lens's focus setting at 1:2 with 8mm spacer and +5 Diopter: 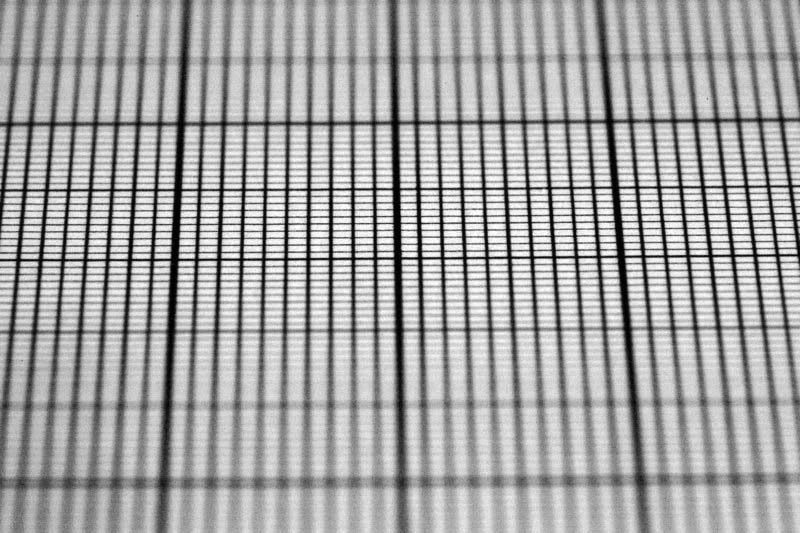 There are a lot of Mitutoyo standard copies. Some have better N.A.

However from what I read on a site from a company that sold zoom setups using mitutoyo objectives, the copy lenses don't have nearly as good a field diameter. I am sorry but I didn't keep a link.

I have mitutoyo's but have yet to build the setup. At least from a vignetting point of view they are not bad. They are just about usable at rated magnification with a full frame sensor.

The new price is high, and the "buy it now" deals on ebay are not particularly cheap. I am not sure they are selling. I got mine only 100 pounds the pair. They were auctioned, and I was the only bidder. You might try making a low offer.
Top
Post Reply Previous topicNext topic
27 posts