FAQ: How do I get a bit more magnification?

FAQ: How do I get a bit more magnification?

Many starting members ask how to get more magnification than their current equipment.
Be warned this can be like having a more powerful motorcycle. It might flip you over backwards as soon as you fire the engine. Then once you’ve mastered that, you come off at every corner. Start slowly or you’ll go nowhere fast

More magnification means more struggling with all the usual problems of movement, lack of depth of field, lighting (both lack of, and diffusion requirement) which will cripple your efforts faster than lack of optic power. Those problems all get harder when you go closer, so getting more magnification is likely to be very discouraging unless everything else is under control. 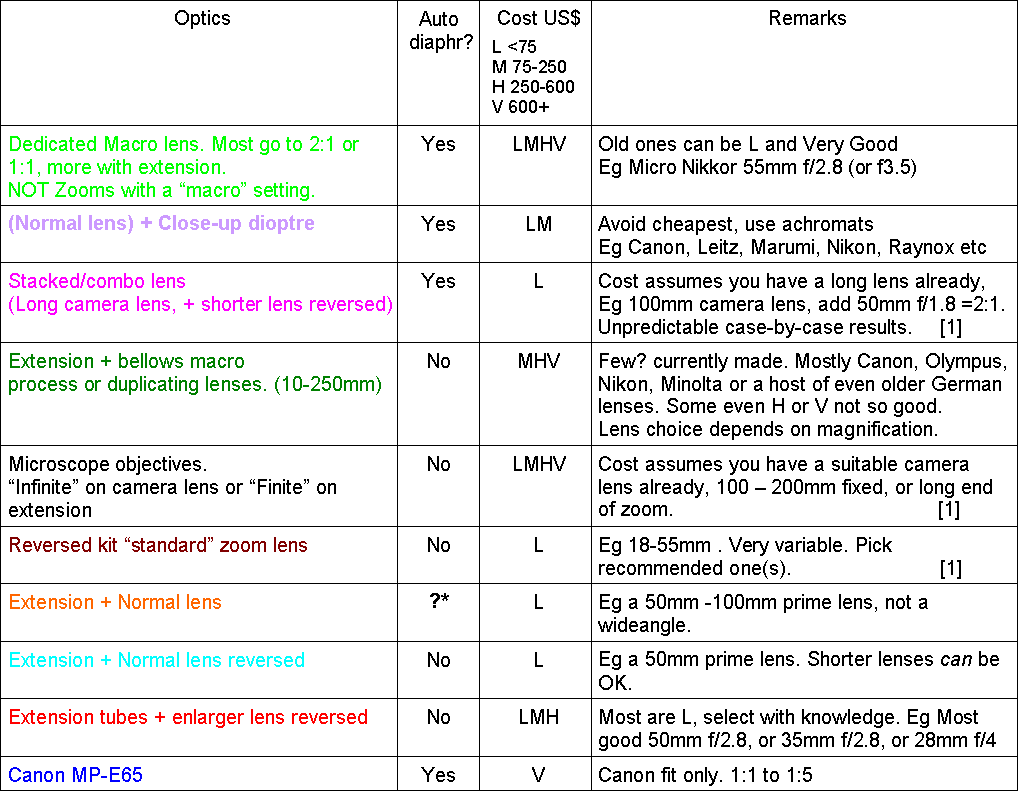 For an APS sensor 23.2mm wide, 2:1 means an 11.6mm field of view.
The lines are intended to indicate about the best you're likely to get with a suitable lens chosen for a particular magnification. An exceptional lens or exotic one costing thousands will beat the curve. Some allowance has been made to indicate convenience. Some are obsolete but commonly available used.
Check the forum for comments about specific lenses. An "ordinary" enlarger lens for example, will be noticeably less good than the best.
"Excellent" is a moving target. As sensors develop we expose more differences between the best lenses.

This is a short guide, only, based on personal experience and some consensus between reviewers. Please use the forum "Equipment" section to discuss specific examples rather than this FAQ. Links can be added to this post by the Admin team.

Remember - overriding everything is the Effective Aperture you're using. As a first guide, try to keep it below around 20 (preferably nearer f/11) for an APS sensor. If you're using a lens which has to be stopped down to f/4.5 to avoid its aberrations, and you use it to get 8x, your Effective Aperture will be
(8 +1) x 4.5, which is f/40.5, so you would expect it to look "soft" due to diffraction. Whether it's better to open a lens to maximum depends on the lens, and the trade off between aberrations and diffraction.

FAQ: How can I hook a microscope objective to my camera?

Why do you need the MPE when a reversed lens does the same?

FAQ: Stopping down a lens combo


Edit:
Something I didn't consider when writing this is a teleconverter.
They can work well if the prime optic is very good. If it's not, they just make the middle of the picture bigger without revealing any more detail.
A 2x converter will double the magnification while keeping the same working distance. You will lose 2 stops though.
Best application is probably with a good macro lens.
They can also "fill the frame" used on a lens combo which otherwise would vignette.

Most wideangle, retrofocus prime lenses are disappointing when reversed. Those designed for close focus, work better, a few are particularly good. Try what you have, but seek advice before buying.

Since writing this:
some better-than-expected results have been published from SOME reversed 50mm f/1.8 camera lenses. They probably vary considerably, so try yours if you have one.

ALSO
while most cheap lenses are still terrible

a few have come up which are particularly good, across all of an APS sensor. (See tests in the Equipment thread). These certainly challenge the value of the Canon MP-E65 in studio use on cost grounds. Be careful if you're using full frame, most don't cover that, which is why I put the MPE line as high as I originally did.

A caveat: New lenses are coming out all the time, but some very good ones are discontinued. Plus, there are exceptional lenses costing thousands which do a very specific job very well. I'm not covering those here. Also there are a few very good lenses used in for example old scanners, but they have no diaphragm and no means of mounting, so hardly worth including here.


ALSO
The Venus 60m f/2.8 Ultra Macro lens has entered the scene. Its main innovation is a means for non-Canon users to get closer than 1:1, as it'll go to 2:1. NB it's all manual though, no auto diaphragm. Reported to beat a Canon MP-E on APS.

ALSO
Laowa have introduced a 2.5x to 5x macro lens. It's manual aperture, so gain you get a darkening image, not so bad with electronic viewfinders though. Quality wise it's at least on a par with the Canon MP-E, at least at 5x. Some MPE-65Es are better than others as with most lenses. The thread is here : http://www.photomacrography.net/forum/v ... hp?t=36410
Top
Post Reply Previous topicNext topic
1 post • Page 1 of 1