I followed the good advise of this forum and bought the old Nikkor 200 mm AI (f4) for 115 euro.
Has anyone tryed this lens in combination with the Mitutoyo in front ?
I would love it to see some pictures of it.
Other suggestions are very welcome.

Thank you all.
Top

I use the Nikkor-Q 200mm, whose versions are discussed here:

Lou Jost wrote:I use the Nikkor-Q 200mm, whose versions are discussed here:

A 52mm adapter to Mitu thread size connects the lens to objective.

The 200 mm f/4 AI and AIS lenses are the successors to the 200 mm f/4 NikkorQ and have considerably better optics as Bjorn discusses here. I don't know how much difference this would make for use as a tube lens, but I think it would be wise for potential buyers of a Nikon 200 mm f/4 lens on e-bay to opt for the better lens.

Yes I agree, and I've made the same recommendation to people. But the Q version is very good. I've used it with a 10x Mitutoyo and a 20x Olympus lens and it gives good results, about the same as a Raynox but more rigid physically. And it is very cheap.

But forum members have often mentioned they are very happy with their AI-S 200mm as tube lenses so I think that must be a very good choice.
Lou Jost
www.ecomingafoundation.wordpress.com
www.loujost.com
Top

It should be fine. You can use an elastic band round the lens hood, holding a piece of white paper for a retractable diffuser. If you're using it vertically you'll need a piece of tape to hold the focus!
Look though it from the rear. If you close it to about f/5.6 it may cut off some reflections.

Thank you all for your advises.

I would like to see the obtained resolution on some pictures...

Resolution is given by the objective, tube lens differences are much less important (corner performance...), so you have at the forum plenty of pictures taken with the Mittys
Pau
Top

I ordered a 200mm F4 Q version for $60 + shipping from KEH after Lou's recommendation and tests. As soon as I ordered the lens I found another listed in bad condition for $12 + shipping, so I ordered it as well.

Both are in good cosmetic condition but the $12 lens aperture blades are sticking. Since I'll be using this as a "tube" lens wide open, no big deal.

Caution!!! These lenses need modification before mounting on your DSLR.

I used a file to remove some of the flange on the aperture ring as shown. The $12 lens was my first patient. Later I'll try the $60 working version.

When I get some time I'll try this as a tube lens with the Mitutoyo objectives, but Lou has already tested and shown the 200mm "Q" version works well as a tube!

Would be nice to see the 200mm AI and Q versions compared with the same objective, if anyone has both? 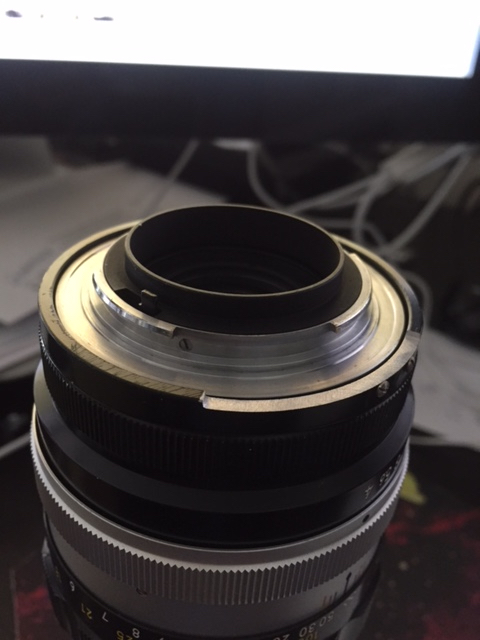 I ordered one the AI-S versions and will be able to test them side by side next month when I get it. I originally got the Q version because it was irresistably cheap. I was pleasantly surprised by how well it worked, but the newer version could be better. Only one way to find out!
Lou Jost
www.ecomingafoundation.wordpress.com
www.loujost.com
Top

I had hoped the Rokinon 135mm F2 would work well as a "tube" lens also. It is amazingly sharp as a regular lens as I reported, but not so good as a tube lens.

Field curvature may the reason, as the Robinon is sharp at the edges of a Full Frame and thus has some "correction" to do so. When acting as a tube lens this correction may work against you.

Anyway, looking forward to your tests.