Several months ago, I opened the May 2021 issue of IEEE Spectrum magazine to see what was new.

Very near the front, I read this article: 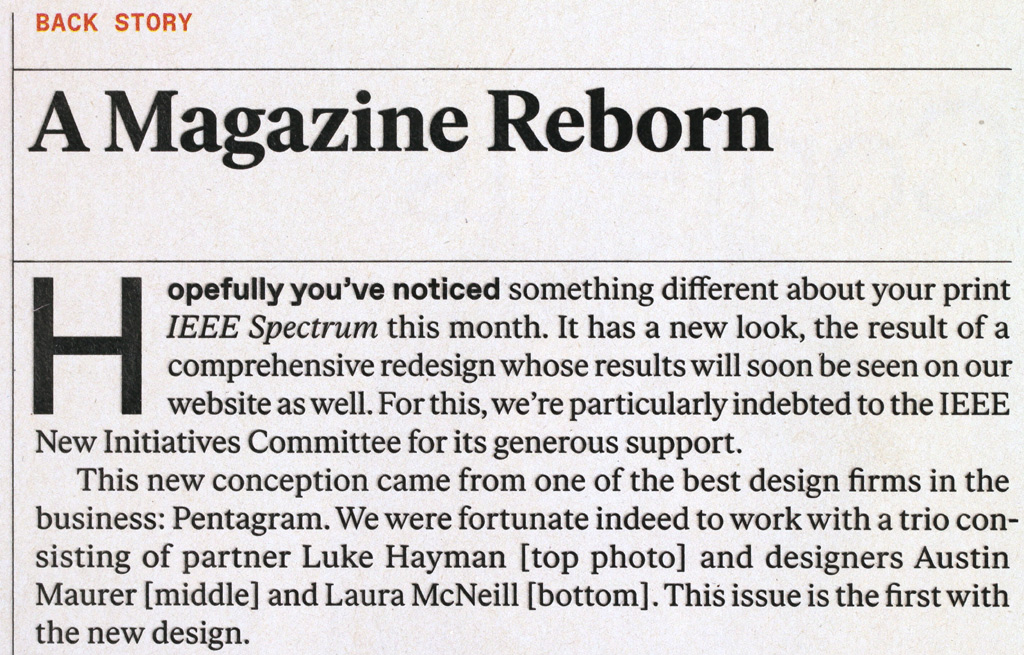 Now, by that point I actually had noticed something different.

But I was not pleased by that fact, because what I had noticed was that I was finding the issue notably more difficult to read than what I was used to.

Hauling out a magnifying glass, I examined the printing: 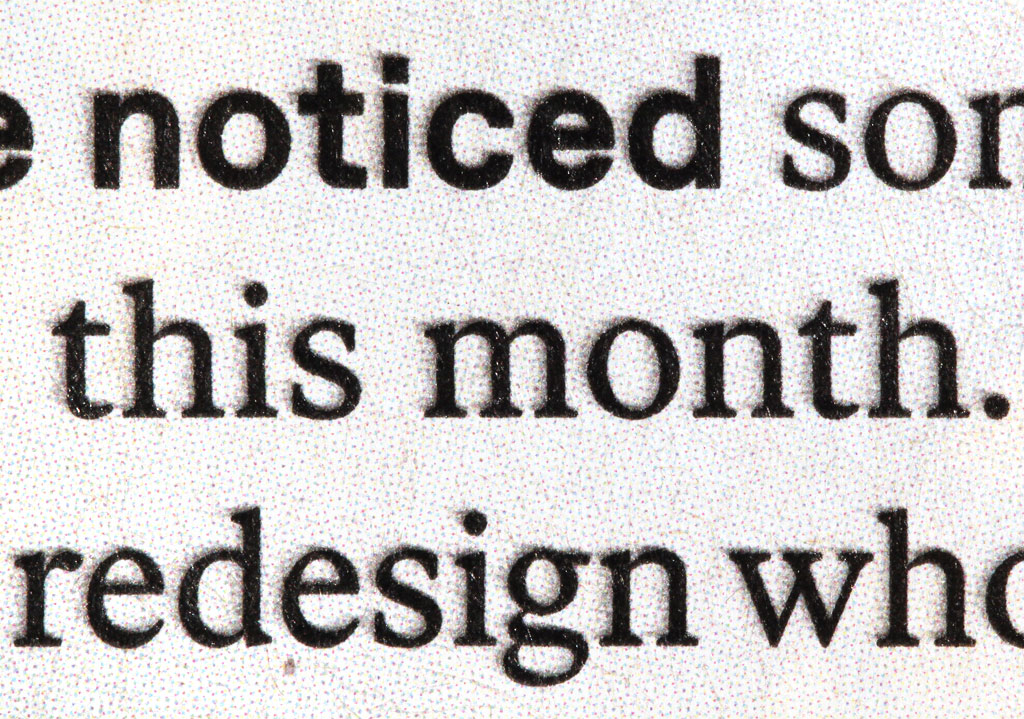 At this point it became perfectly clear to me why I was having trouble reading the text: the letters were blurred. Actually they looked like they were deliberately shadowed. But why would anybody think that shadowing a lot of text would be an improvement? And why would anybody put a shadow above the thing that supposedly caused it?! This made no sense.

After studying more of the magazine, I concluded that the "shadowing" was probably just a printing smudge, perhaps caused by a bit of paper movement during imprinting. Thankfully, that seems to have been a good guess, because while it did appear on several pages in the same issue, the ghastly shadowing never appeared again in any other issue. Whew! (I confess, I hope the designers' copies had the same flaw. It's a sort of distress that begs to be shared.)

However, another interesting feature of that page has continued to appear, and with surprisingly high frequency.

That interesting feature is the lightly half-toned background around the letters. This covers almost the entire page. In fact, on the page of the announcement, the only spot of paper not covered by this halftone is part of a QR code, whose light sections are plain white paper.

The overall effect is that the page appears to be printed on slightly gray paper.

At first I skeptically wondered if they were trying to give the impression of using recycled paper, when in fact using virgin paper plus more ink to give the gray effect.

But then I decided that no, there must be some other reason, I'm just having trouble figuring out what it is. That problem continues. I still can't figure out quite what the point is.

On some pages the background gray is used to good effect, by providing the possibility for what appear to be "brighter than white" sections in illustrations: 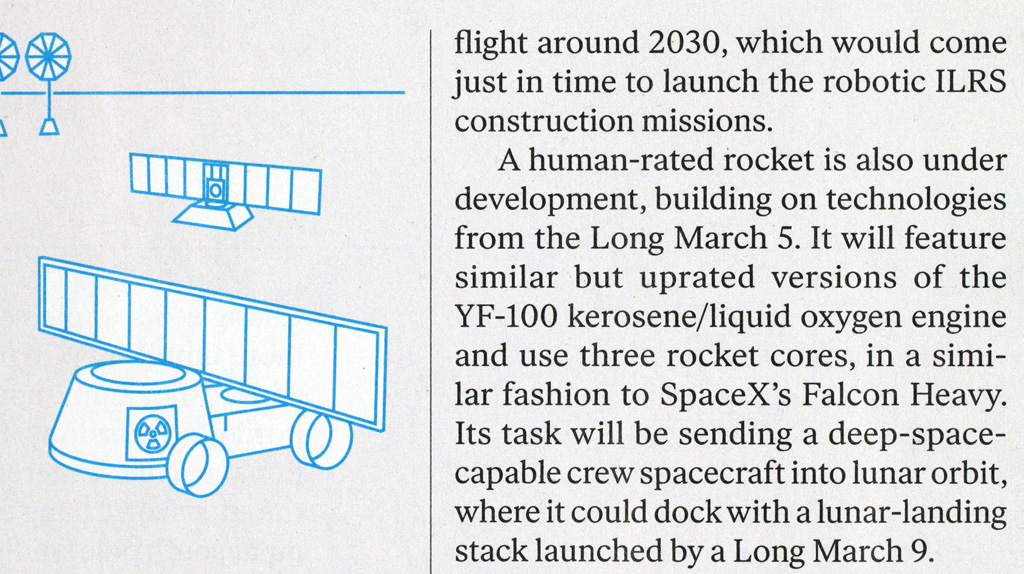 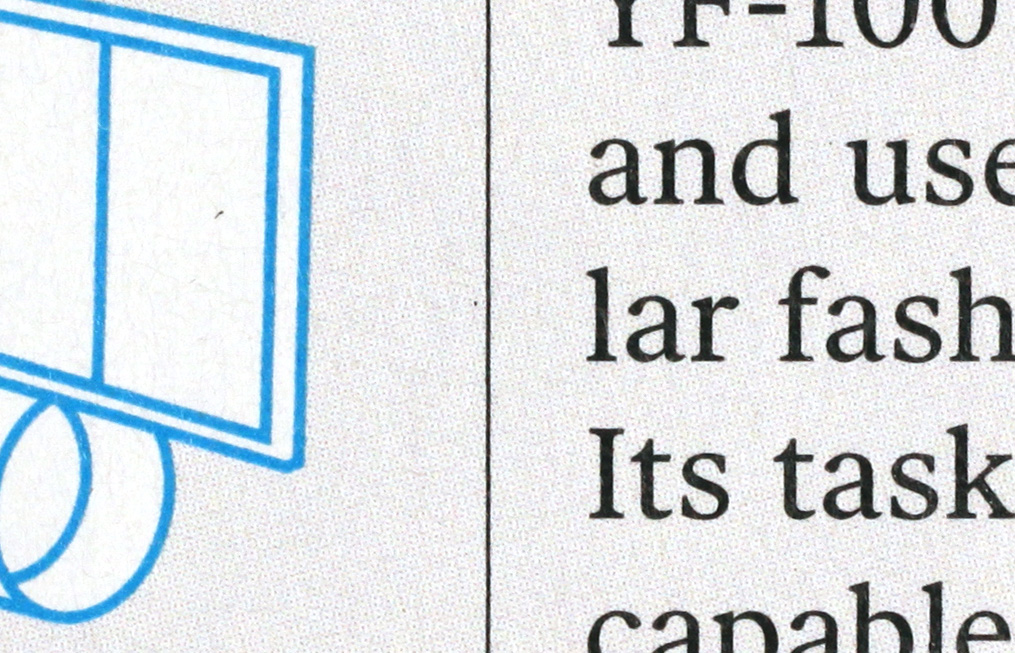 However, the brighter-than-white capability is definitely not used on all pages. Instead, there are plenty of pages that are completely halftoned, with no pure whites. And plenty of other pages with no half-toning at all, except for illustrations and sidebars. Those pages are just normal white paper. The first text page of each article seems more likely to be half-toned, but that's not foolproof either. And it's not some special sort of paper or process, because I quickly found one piece of paper whose same face is completely halftoned as "page 7" in the front of the magazine, but plain white as "page 58" in the back of the magazine, on the other side of the staples. It switches from half-toned to plain white right at the fold line, as you'd expect for any other sort of printing. I just don't know what the rule is. I'm guessing it comes from some esthetic that I don't happen to grasp.

In any case, I hope you find this interesting.

Having less contrast between the type and page can reduce eyestrain, according to some in the "human factors" community. Certainly very high contrast images can mess with our visual receptors. For print? Only specific examples I've seen documented were improving legibility for the dyslexic and on-screen reading (e.g. the IEEE website) -- but I've seen that claim (better to use black on gray, dark gray on white, etc.) several times for print publications as well.
Top

PeteM wrote: ↑
Sun Nov 21, 2021 1:13 am
Having less contrast between the type and page can reduce eyestrain, according to some in the "human factors" community. Certainly very high contrast images can mess with our visual receptors. For print? Only specific examples I've seen documented were improving legibility for the dyslexic and on-screen reading (e.g. the IEEE website) -- but I've seen that claim (better to use black on gray, dark gray on white, etc.) several times for print publications as well.

Something along these lines would be a great explanation, if the rule were applied consistently.

But I have just now gone through a recent issue (October 2021) and tallied up the number of pages that were treated each way.

What I found were 21 pages with halftoned background, versus 30 pages with pure white background. (There were also 13 pages that had little or no background due to large illustrations.)

If the goal is increased readability, then I am baffled by the nearly equal split in treatments.

They do indeed, and for that treatment I have no trouble providing an explanation.

Variations in background color are used to clearly divide the page into blocks and to separate adjacent items, for example alternating brightness between topics in each forum index. In the default "prosilver" theme these backgrounds are various shades of blue and tan, which may be attractive by themselves but do not play well as a general surround for color photos. So, for general use here at PMN, I provided more neutral themes that use shades of gray instead of colors.

I let my IEEE (and a couple other engineering) memberships lapse, so can't check for myself. Question is, Rik, if the IEEE Spectrum pages without the halftone background had photos or some other element that wanted a full range of contrast??

Spectrum always seemed to be a far more professionally staffed, edited, and produced publication than, say, the mechanical and manufacturing engineering equivalents. So one might expect a rational explanation. But could be this is just another case of a publication's graphic designers adopting some new design notion, but not all that consistently?
Top

PeteM wrote: ↑
Sun Nov 21, 2021 2:26 pm
Question is, Rik, if the IEEE Spectrum pages without the halftone background had photos or some other element that wanted a full range of contrast??

I wondered about that too. Again, I cannot find any pattern that holds up.

Here are three representative spreads. The surround is white illustrator's board, the white patch at top center is an index card, and all the images have the same exposure and processing.

This one is half-toned everywhere: 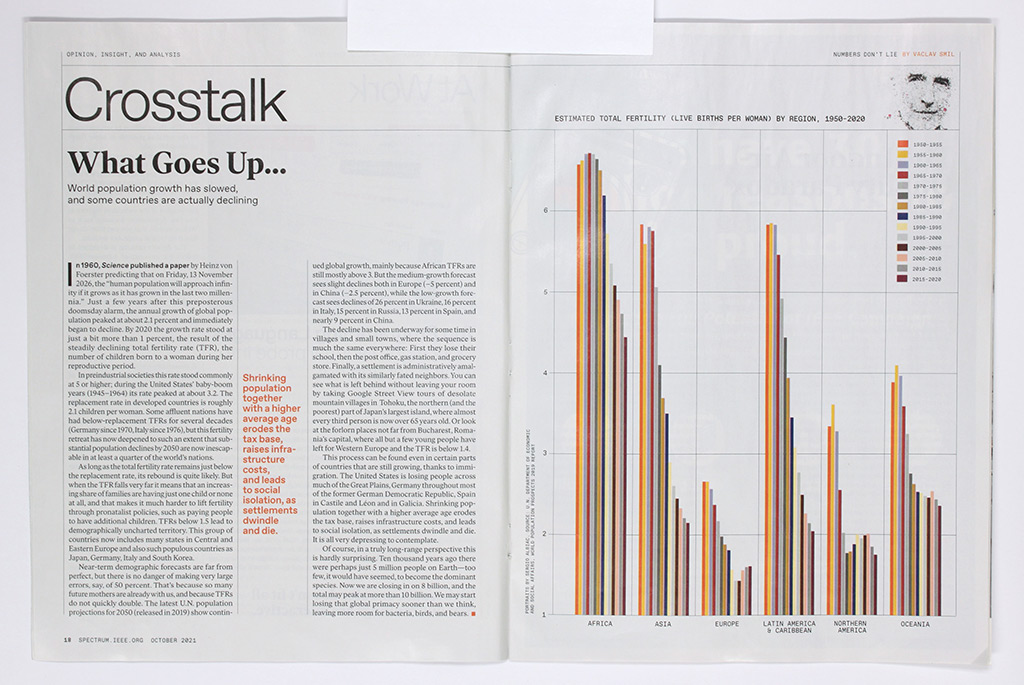 This one is plain white paper: 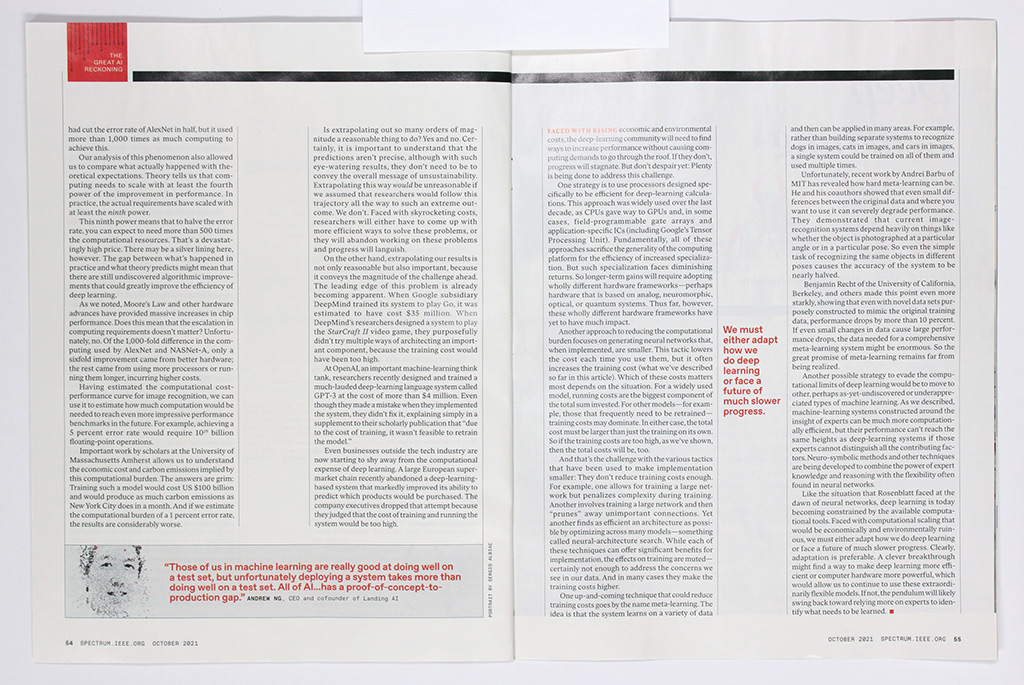 This one also is plain white paper: 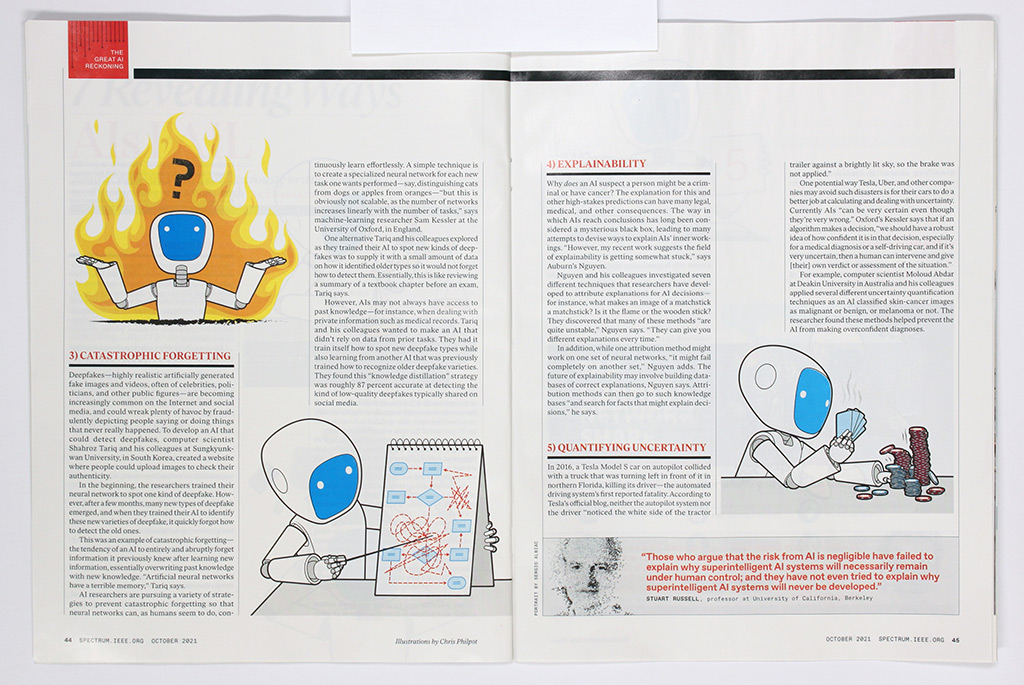 Oddly, this third one shows a case where "brighter than white" could reasonably have been used in the illustrations, but the page designers chose not to do that.


But could be this is just another case of a publication's graphic designers adopting some new design notion, but not all that consistently?

I cannot rule out that possibility.

On the other hand, I expect there is some very good reason that I just cannot figure out. I suppose I could ask the editors. [Edit: done -- email sent. Four months later: no reply.]

If you have vision issues, any loss of contrast is bad let alone the other annoying / cutsie aspects to it.

OTOH, its only slightly grey-er than the background of the text in the forums.

I prefer a less blinding white background if I have to read a lot. Books with yellowed pages seem more comfortable to read than bright new books. I have cataracts, maybe that affects my preference.
Lou Jost
www.ecomingafoundation.wordpress.com
www.loujost.com
Top

With keratoconus, I have the opposite problem. Multiple overlapping ghost images. Overlapping images of white space are just more white space of the same brightness, but the printing is lowered in contrast and also made indistinct geometrically. Eyes, they are so much fun.
-- Bob