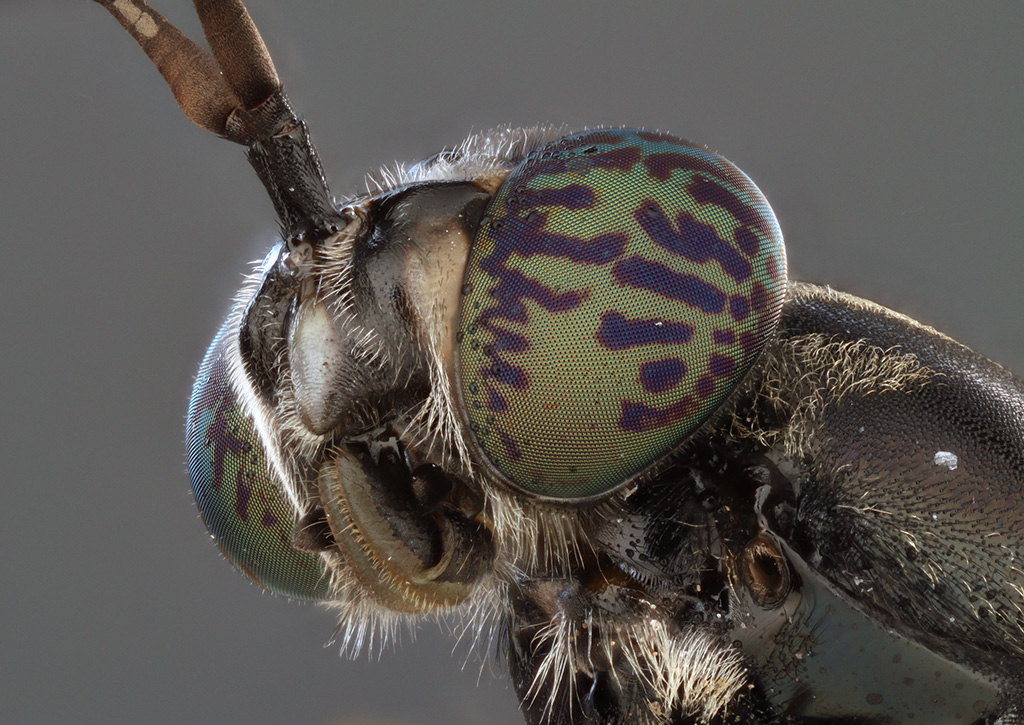 But I did not expect to ever work with a fresh specimen. That's because I used to read that here in the US they were creatures of the south and east, pretty much diagonally opposite from me.

However... That was then, and this is now, and the times they are a-changin'.

According to observations reported at iNaturalist.org, BSF was seen in Oregon by 2015, in Washington by 2017, and in my own town of Richland by 2018. They have been seen here every year since, just not by me.

Until this summer, that is.

A few days ago, I happened to look down while passing my compost pile, and saw what appeared at first glance to be a sow bug, stretched out long and flat along the upper surface of a corn husk. Recreating that scene, from a much closer vantage point, it looked a lot like this: 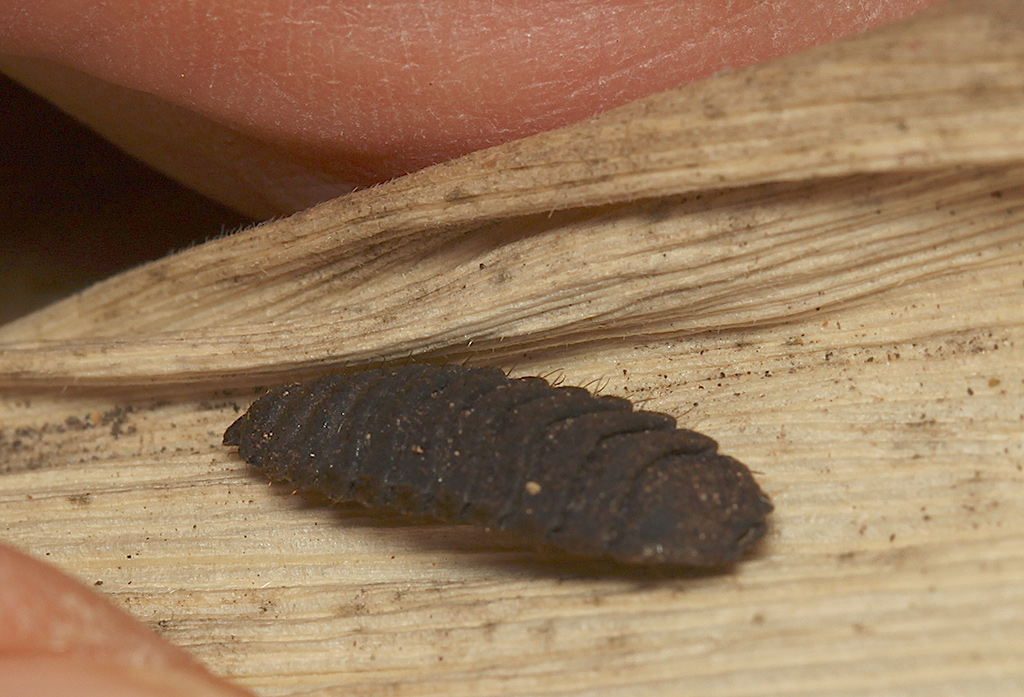 Just taking a chance, I did a Google image search on "fly pupa", and right away popped up several photos that looked exactly like what I had. "Black Soldier Fly", they were labeled.

Aha. OK, then that might also explain the two large black things I had seen flying around earlier. I had thought they were black wasps, but oh, wait, one just stopped for long enough to get a good look at. Yep, big black fly.

Then of course I had to get a closer look, and that eventually became the photo you see at top of post.

Here's a more clinical side view, so you can see why these things are described as wasp mimics: 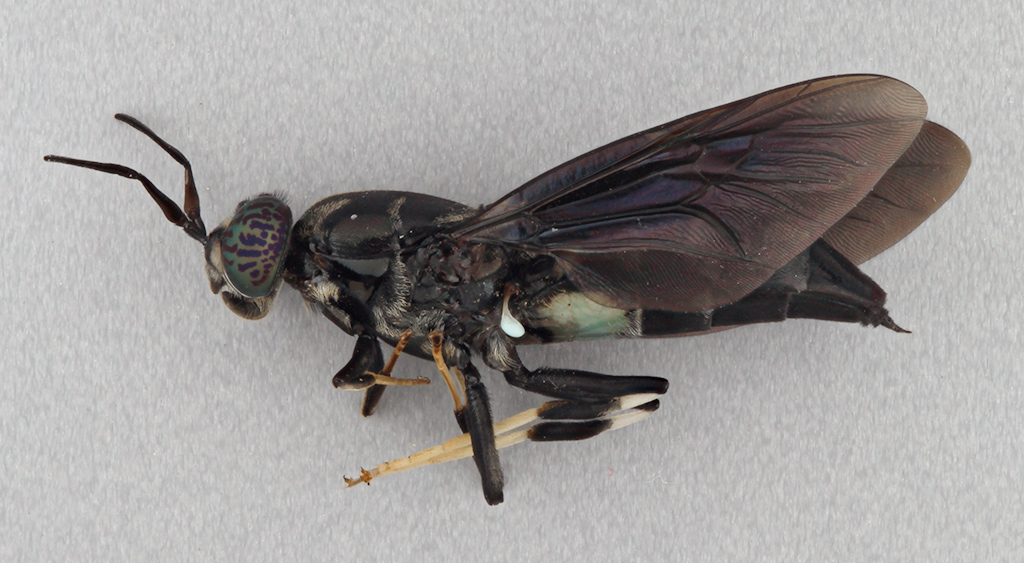 I also felt compelled to do a little poking around in the compost pile. it looks like there'll be no shortage of these things later in the year: 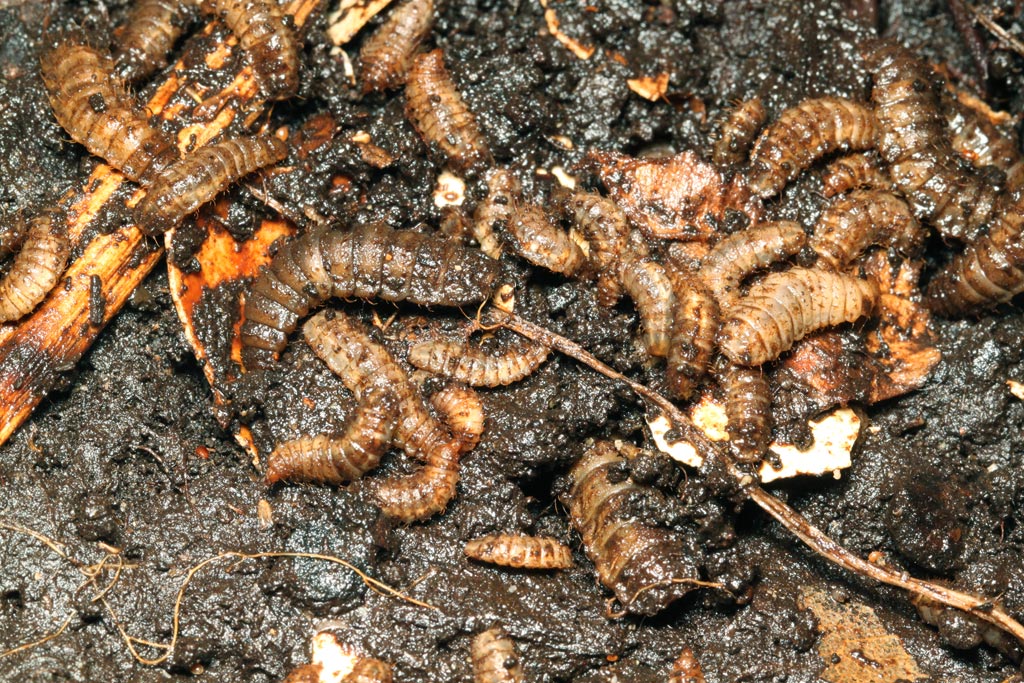 Along the way, I did some reading. On several pages I read that the adult flies do not eat and do not even have functioning mouth parts.

That prompted me to take some closeups of the mouth parts. Here are a couple of stereo pairs. 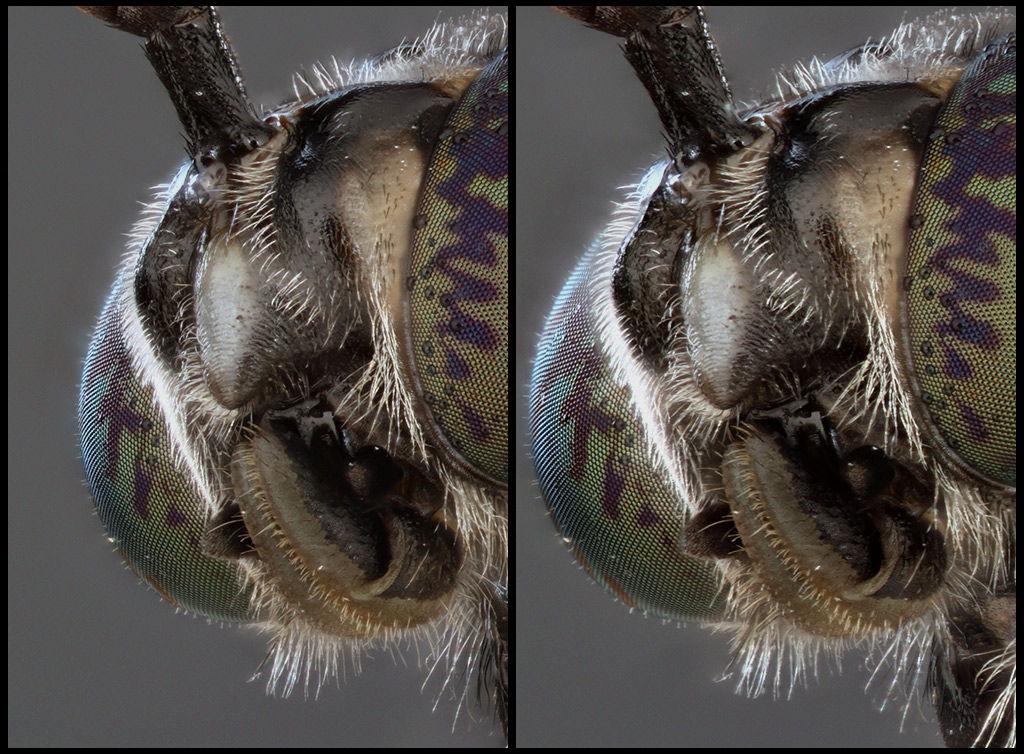 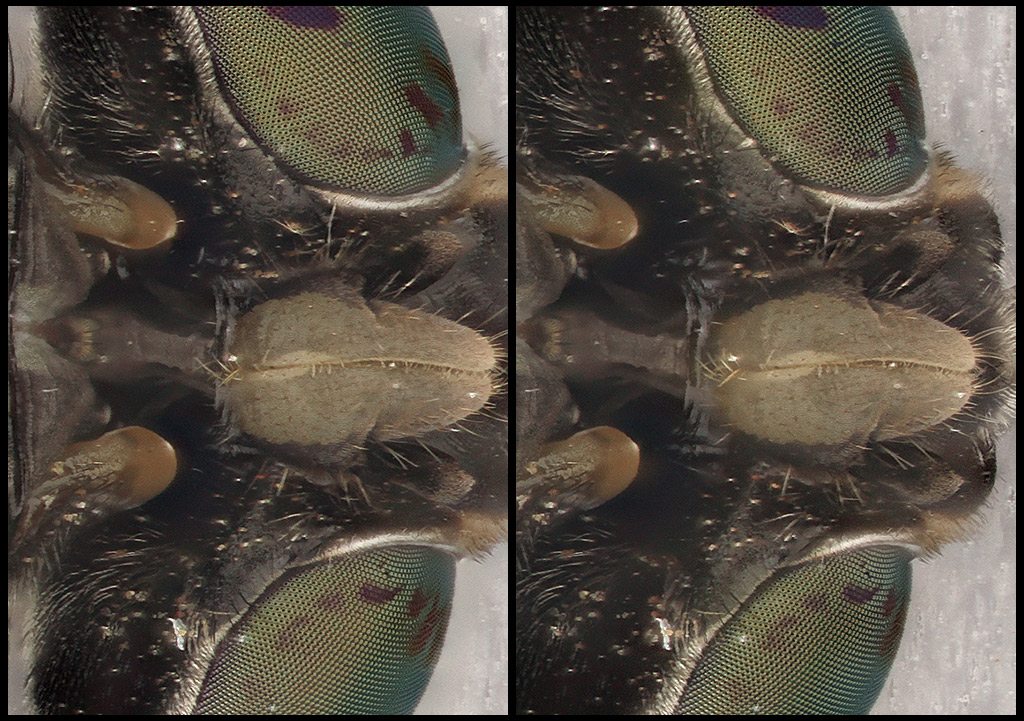 So then I got puzzled, because what I see in the photos does not look at all like vestigial non-functioning thingies.

More reading... It turns out that they do eat. The Wikipedia article references a paper by some Italian researchers who studied the issue in great depth. Quoting from https://link.springer.com/article/10.10 ... 19-03025-7 :

Abstract
The larvae of the black soldier fly (BSF), Hermetia illucens (Linnaeus, 1758) (Diptera: Stratiomyidae), are considered an efficient system for the bioconversion of organic waste into usable products, such as insect protein for animal feed and bioactive molecules. Despite the great interest toward H. illucens and its biotechnological applications, information on the biology of this insect is still scarce. In particular, no data on the structural and functional properties of the digestive system of the adult insect are available and it is a common belief that the fly does not eat. In the present work, we therefore investigate the remodeling process of the BSF larval midgut during metamorphosis, analyze the morphofunctional properties of the adult midgut, evaluate if the fly is able to ingest and digest food and assess whether the feeding supply influences the adult performances. Our results show that the larval midgut of H. illucens is removed during metamorphosis and a new pupal-adult epithelium, characterized by peculiar features compared to the larval organ, is formed by proliferation and differentiation of midgut stem cells. Moreover, our experiments indicate that the adult insect possesses a functional digestive system and that food administration affects the longevity of the fly. These data not only demonstrate that the adult BSF is able to eat but also open up the possibility to manipulate the feeding substrate of the fly to improve its performances in mass rearing procedures.

The article is behind a paywall, but it seemed interesting enough to be worth the expense, so I bought a copy of the PDF. The research described strikes me as a tour de force. It shows structure by TEM and SEM, enzyme assays, gene activity assays, an assortment of chemical tagging experiments, and of course the basic end-to-end test: "Fly longevity under different nutrient conditions".

Ignoring all the complicated stuff and focusing on the simplest available observations, here's the quick summary, Figure 9a: 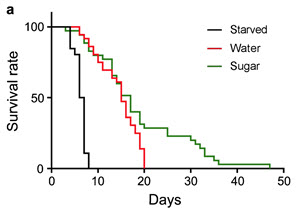 OK, now things are making more sense. There's no difference in survival between just water and water+sugar, out to about 50% mortality at 15 days. That's plenty of time for them to mate and lay a bunch of eggs. After 15 days, the remaining flies with just water all run out of resources and croak by 20 days, while some of the ones with sugar available can last twice that long, giving a much longer tail on the distribution.

I learned other interesting things also. Perhaps the most interesting thing is that you can buy large quantities of live larvae, at lots of places including Amazon, and they'll just be shipped to you in the mail, guaranteed live delivery. Papers say that feeding them is easy. In their "Rearing Methods for the Black Soldier Fly (Diptera: Stratiomyidae)", Sheppard et.al. report "Gainesville House Fly Diet consisting of 50% wheat bran, 30% alfalfa meal, and 20% corn meal ". Mine seem to be getting along fine with miscellaneous scraps of kitchen veggies, out in the compost pile.

Anyway, if you too want to play with these things, be aware that getting some should be no problem!

Reports are that these flies are good neighbors. The Black Soldier Fly larvae eat stuff that would otherwise attract a lot less savory kinds of flies, while BSF adults are not known to be vectors for any diseases. In particular they are not noted for walking around on human foods, periodically pausing to squirt out some stomach contents and suck it back up, leaving only "a little bit" behind. I may look forward to seeing more of these and fewer houseflies and blowflies, just the way my yard has traded off native yellowjackets for European paper wasps.

Here's another angle I have not noticed before. At first glance, pretty good imitation of a wasp's waist! 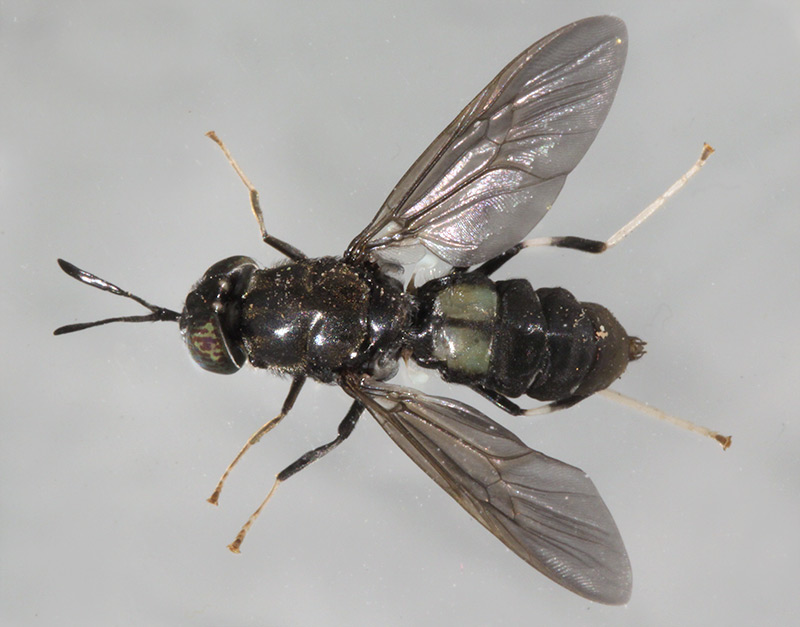 One of my flies died with its proboscis open. Here is the working surface, opened up: 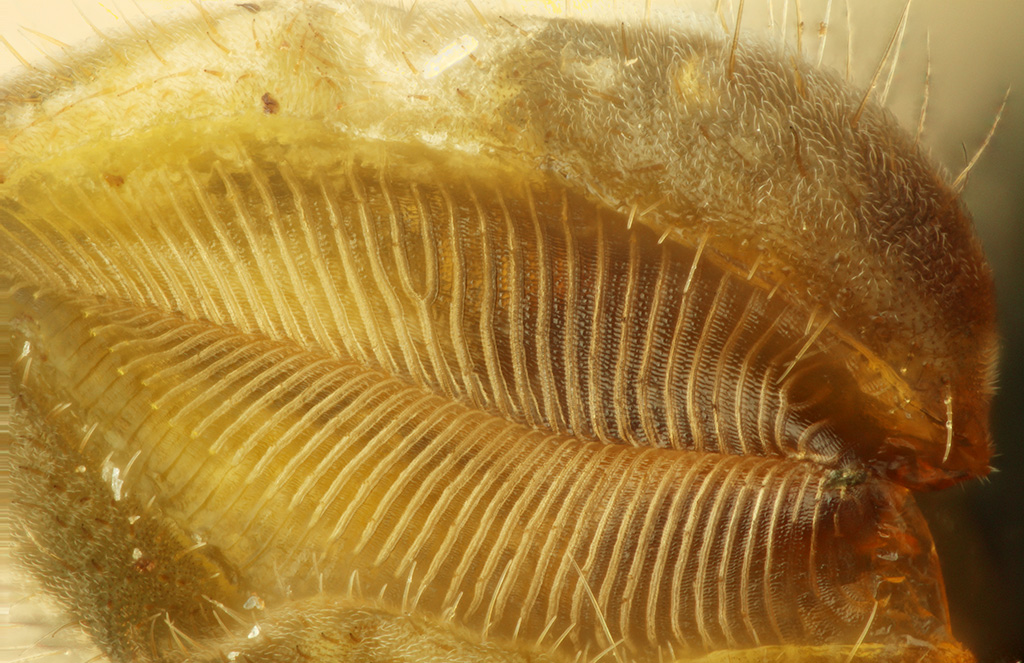 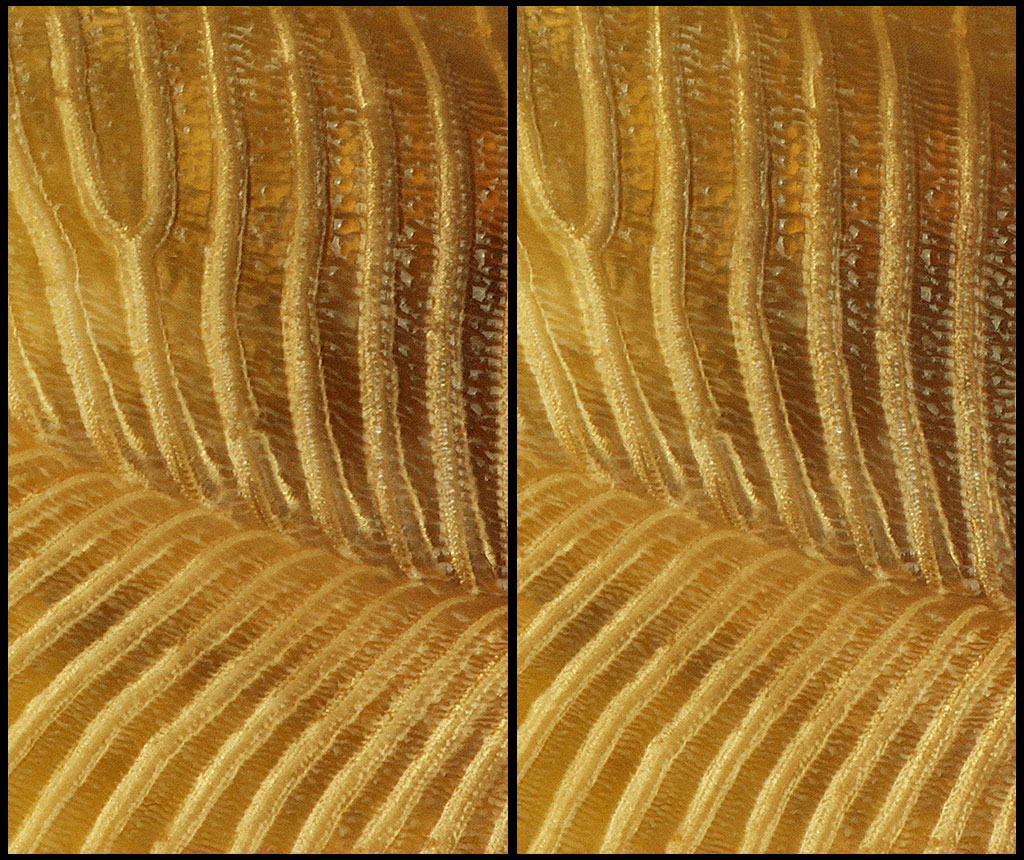 
The following SEM image (not mine!) is cropped and rotated from Figure 1 of "The digestive system of the adult Hermetia illucens (Diptera: Stratiomyidae): morphological features and functional properties", by Daniele Bruno et.al., https://link.springer.com/article/10.10 ... 9-03025-7 . The SEM image indicates that my specimen has not opened up nearly all the way. In my specimen, the channels are still closed, and what appear to be dark sieve-like structures between the channels are probably just pebbly membranes reflecting the illumination so as to look discontinuous. 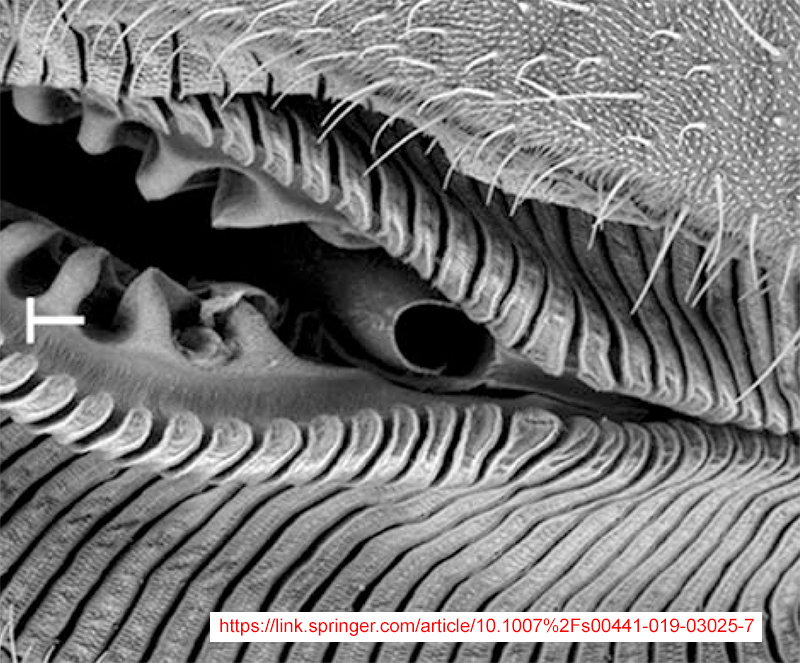 update: my yard has BSF's again this year

These are Black Soldier Fly Larvae (BSFLs) in my compost pile. There's nothing special about the photo; it's just here to anchor the observations written below. 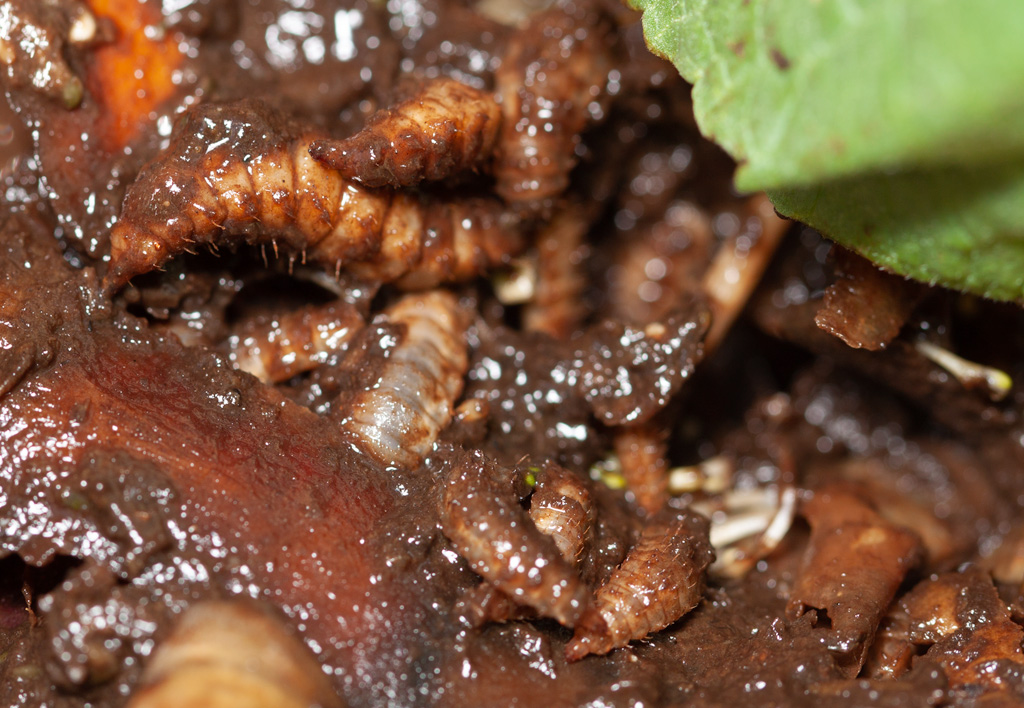 Last summer (2021) was the first time I had seen Black Soldier Flies living in my yard. We have cold winters, so I wondered if they would persist. Yep, they did -- I started seeing an occasional adult the first week in August, and now I see them regularly though not frequently. I have never seen more than two at a time, more often only one, most often none at all. But wait for a few minutes near the compost pile and likely one will show up, often taking a few buzzes around my head so my first thought is that it's a horsefly. All sizes of larvae are very common in the compost itself, especially where it's gooey from food waste instead of dry weeds and other yard waste.

I am interested to note that last year my kitchen had hardly any small fruit flies like Drosophila, despite the presence of lots of apricots and peaches that would normally attract hundreds of them. The same is true this year. This is only two years, and it could be coincidence that the absence of fruit flies coincides with the presence of BSFLs. But I have to wonder, are these species competing for resources, with the BSFLs winning out?

Looks like great topic for next months Macro group

Interesting article, Rik. I did a "Google" search for Canada and came up with "considerable interest in using larvae of H. illucens for organic waste control, composting, and as animal food supplements (fish)". Only specimens recorded in Canada were from southern Ontario. Oh, if you are short of fruit flies I can send you some. Gal pal brought home some pineapples and fruit flies showed up shortly thereafter.
Top

Re: update: my yard has BSF's again this year

Rik - Thanks a lot for posting to this, I hadn't seen it before and it's fascinating. I got to the end and was wondering if there have been any studies as to what insects the BSF may be pushing out as its range spreads? And it really is surprisingly wasp-like in appearance - which seems like the kind of thing that invites officious-sounding speculation as to why. Have you seen any good ideas on the point?

Re: update: my yard has BSF's again this year

ldflan wrote: ↑
Wed Aug 31, 2022 3:07 pm
I got to the end and was wondering if there have been any studies as to what insects the BSF may be pushing out as its range spreads? And it really is surprisingly wasp-like in appearance - which seems like the kind of thing that invites officious-sounding speculation as to why. Have you seen any good ideas on the point?

BTW, a couple of days ago I happened to run into an adult in a different yard, a couple of blocks away from mine on the other side of a park. This one was just hanging out on some grape leaves: 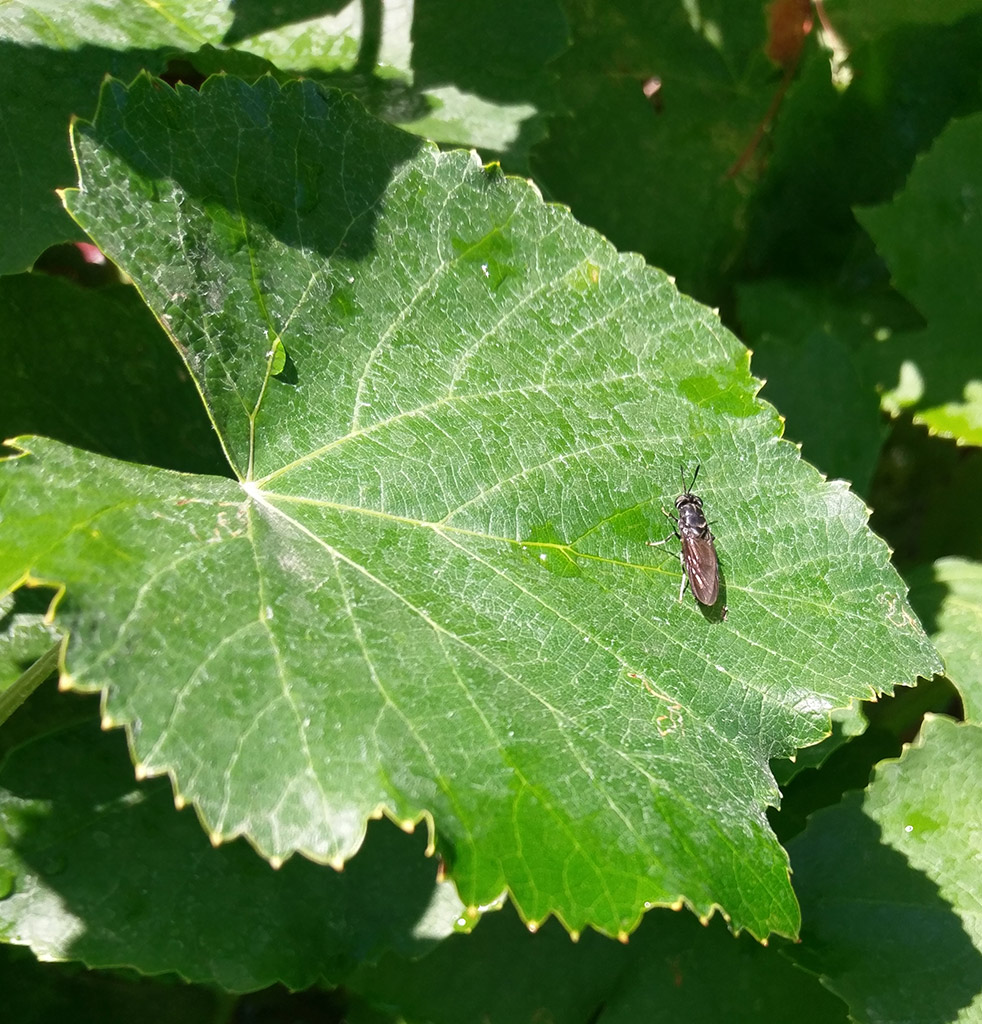 This is a cell phone photo, shot from rather far away and heavily cropped. That's because when I tried to get closer, the critter buzzed off.

I am intrigued to note that last year the adults struck me as sluggish, as in sometimes could be caught in any handy container or even by hand, no net required. But this year, every one that I have seen has acted like a normal big fly, not simple to approach. Similarly I remember that the larvae last year were easy to frame and focus, where this year as soon as I expose them to daylight they start disappearing quickly into the substrate. I suppose probably this is just a matter of temperature, or maybe I'm a lot slower this year, but since the flies are new to my neighborhood it's tempting to speculate that the population is still adjusting to local conditions.