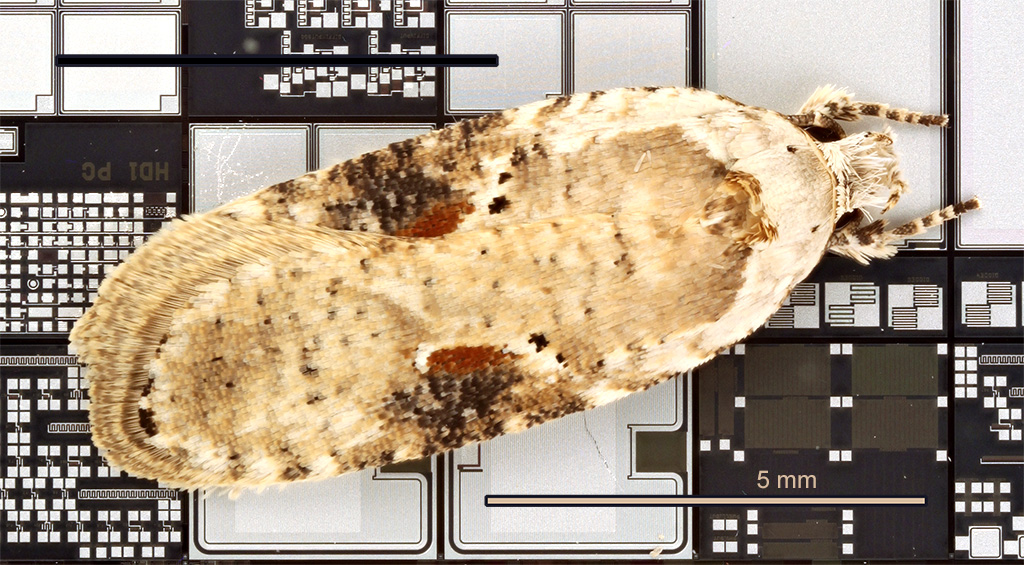 This small moth appeared in my kitchen a few days ago. My wife asked me to identify it, so I dutifully hauled out my copy of Moths of Western North America, hoping that I might find something vaguely similar.

To my surprise, the moth appeared to be a perfect match to one of the illustrations in the book. But the ID seemed a little odd, so I took a quick snapshot and sent an email to an entomologist with the local university:

I hope this finds you well and just busy enough!

I am hoping that you can solve a mystery for me.

A couple of nights ago (July 24), my wife asked me to identify a small moth that she had scared up in the kitchen of our house in north Richland.

Now, I had come down from the mountains of Goat Rocks Wilderness just a couple of hours earlier, and I cannot totally eliminate the possibility that the moth came with me. However, that theory has the problem that I had not moved any of my gear from the car into the house, so the moth would have had to either fly from the car into the house, or be transported on my person, after 3 hours of driving without being noticed. Neither seems very likely. So, from that standpoint I am inclined to think that the moth grew up here in Richland. But on the other hand I read that Agonopterix alstroemeriana is monophagous for poison hemlock (Conium maculatum), and I'm not aware that any of that plant grows in my neighborhood.

Hence the mystery, or maybe two mysteries. First, is this really Agonopterix alstroemeriana, and if it is, then second, is there any good explanation for how it came to be found live in perfect condition in Richland?

The reply was prompt:

I think you did have a poison hemlock moth flying in your kitchen and its likely to be local. There are records of poison Hemlock in Benton and Franklin counties, along the Snake and Yakima rivers. One report describes it as common along parts of the Yakima river.

I presume the moths are well adapted to seeking out new patches of Hemlock, so they are probably quite dispersive, meaning Hemlock doesnt have to be nearby. Usually, the dispersive phase is the newly emerged adult so it would be fresh-looking. Guess it got sidetracked to your kitchen somehow!

Well, OK -- I have a Poison Hemlock Moth in my kitchen! Who would have thought? Apparently it flew in from about 3 miles away, that being the nearest wetland around the Yakima River.

As you've seen in the photo above, the moth is quite an attractive little critter, so I decided to see if I could get a decent studio photo of it.

For other reasons, I had a black-and-white aluminized wafer queued up, and I thought that would make a cool background. All I needed to do was get the moth to sit on the wafer for a little while. Foolish mortal.

It turns out that these moths are remarkably resistant to being slowed down. I left it in the refrigerator for a while, pulled it out, and it immediately wanted to fly. So I stuck it back in the refrigerator for a couple of days, pulled it out, and it immediately wanted to fly. I tried stunning it with a brief dose of CO2, no effect. I filled its plastic container with CO2 and left it to soak for an hour or so. That stopped the beast in its tracks, or so it seemed. The moth totally lost its grip on the container and when I tipped the container it fell right out and just lay there, upside down. For maybe 10 seconds. But as soon as I turned it over, hey presto, it wanted to fly again. Back in the container to soak some more.

The next time I took it out, I was much more ready for action. I removed the lid, poured the moth out, it landed right side up this time, and I immediately clapped a small glass cage over the beast. Then it was "just" a matter of waiting for the moth to get acclimatized to sitting there calmly under the lights while I took its picture. That took a while too, but fortunately I could do other things in the meantime. 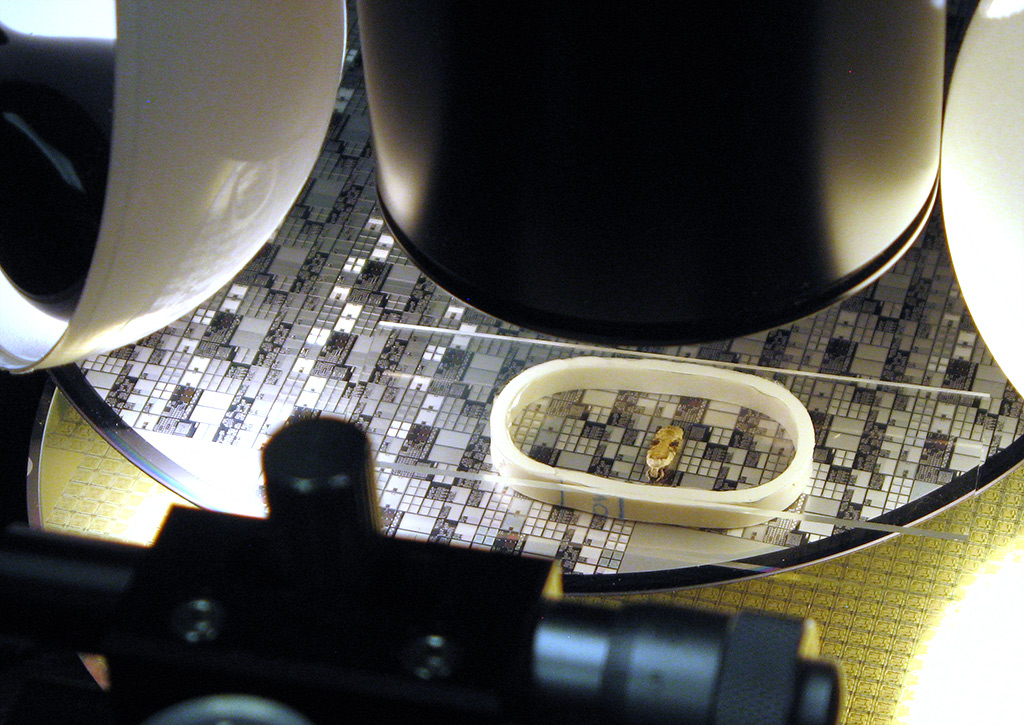 The full entry in Moths of Western America (page 65) says this:

Agonopterix alstroemeriana is one of our most distinctive, widespread, and often-seen species, distinguished from our native species by having white FW (7.5-9.5 mm) with a distinct, blood red discal spot. It is a Palaearctic species that was first detected in North America in New York in 1973, then suddenly appeared in 1983-1985 scattered over Washington, Oregon, Idaho, Utah, and coastal California. Its spread may have been aided by accidental transport of dormant moths, and the colonization was facilitated by the ubiquitous occurrence of the larval host, the weedy umbell, poison hemlock (Conium maculatum). Adults of A. alstroemeriana are long-lived, from June to March, and sporadically come to lights, most often in June and during the Winder. They are found inside outlying buildings and wood piles in rural and suburban areas. The larvae are bright green and form tight shelters in the leaflets of Conium in April and May, sometimes in great numbers, as local parasites seem not to have adopted this species extensively, and predators may be repelled by plant chemicals sequestered by the larvae.

And finally, here's a closer shot of the distinctive pattern: 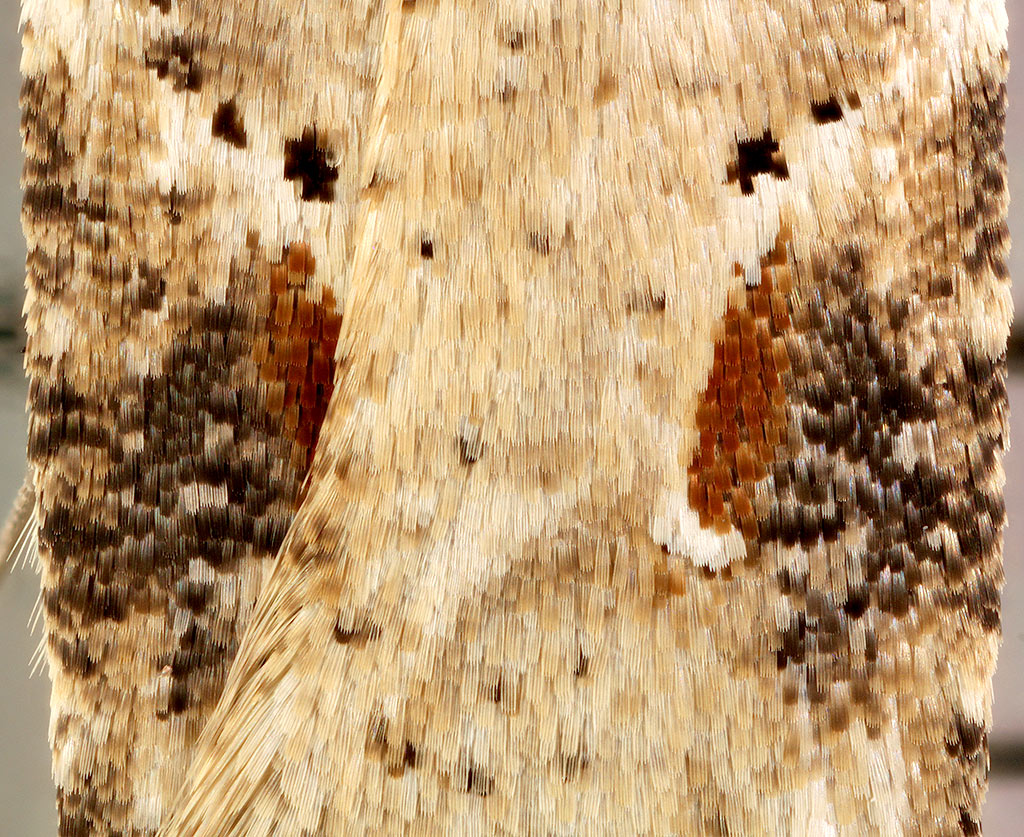 Canon T1i camera (APS-C) with Canon MP-E 65 lens at 1X and 5X, cropped for presentation. Stacked with Zerene Stacker PMax at nominal DOF, continuous illumination at ISO 100 and EFSC: 1X, f/11, 1/4 sec; and 5X, f/4, 0.6 sec. Flashing seemed like a really bad idea, given the moth's inclination to move around.

I hope that something in here strikes your fancy!

Appears to be very common (sorry Rik!); 50 or so images on BugGuide.
European, introduced to NA
NU.
student of entomology
Quote – Holmes on ‘Entomology’
” I suppose you are an entomologist ? “
” Not quite so ambitious as that, sir. I should like to put my eyes on the individual entitled to that name.
No man can be truly called an entomologist,
sir; the subject is too vast for any single human intelligence to grasp.”
Oliver Wendell Holmes, Sr
The Poet at the Breakfast Table.

An interesting account. Getting a critter to #$#%# hold still can be highly vexing. One thing to try is to contain them where they will be photographed (as in under your glass cage), and to leave them in the dark. Dark can be very quieting. I wonder if then using a red light would allow you to do last minute adjustments before the pictures start.
Mark Sturtevant
Dept. of Still Waters
Top

Yeah, most of the stuff that strikes me as new and interesting turns out to be well known and common somewhere else. I take solace in noticing that these things didn't even arrive in Washington until I was something over 30 years old. So it does count on the list of "new arrivals that I personally have seen", though not nearly to the same level as European paper wasps or Large Yellow Underwing moths, both of which are now regular inhabitants of my yard.

MarkSturtevant wrote: ↑
Thu Aug 05, 2021 12:06 pm
I wonder if then using a red light would allow you to do last minute adjustments before the pictures start.

It might, but then for stacking what's the use, if the critter is going to start moving when a normal exposure light comes on?

Some moths normally fly at night and get very quiet if a bright light is shined on them. I suppose these are the ones that like to "hide in plain sight" by camouflage. The moth at https://www.photomacrography1.net/forum ... hp?p=15304 sat on its stick for 2+ days, as long as I shined a flood lamp on it. That was an incandescent bulb, so it would have been plenty warm also.

I had hoped that the current moth might behave like that, but no such luck. It sits still for a while, then it moves. The trick is to shoot a stack between movements. It's a case where one of those cameras with fast in-camera focus bracketing would be Really Handy.