I've lived in the same place for 40 years, and this is the first year I can recall ever seeing these things.

This was a mating pair, which split up before I could start photographing them. 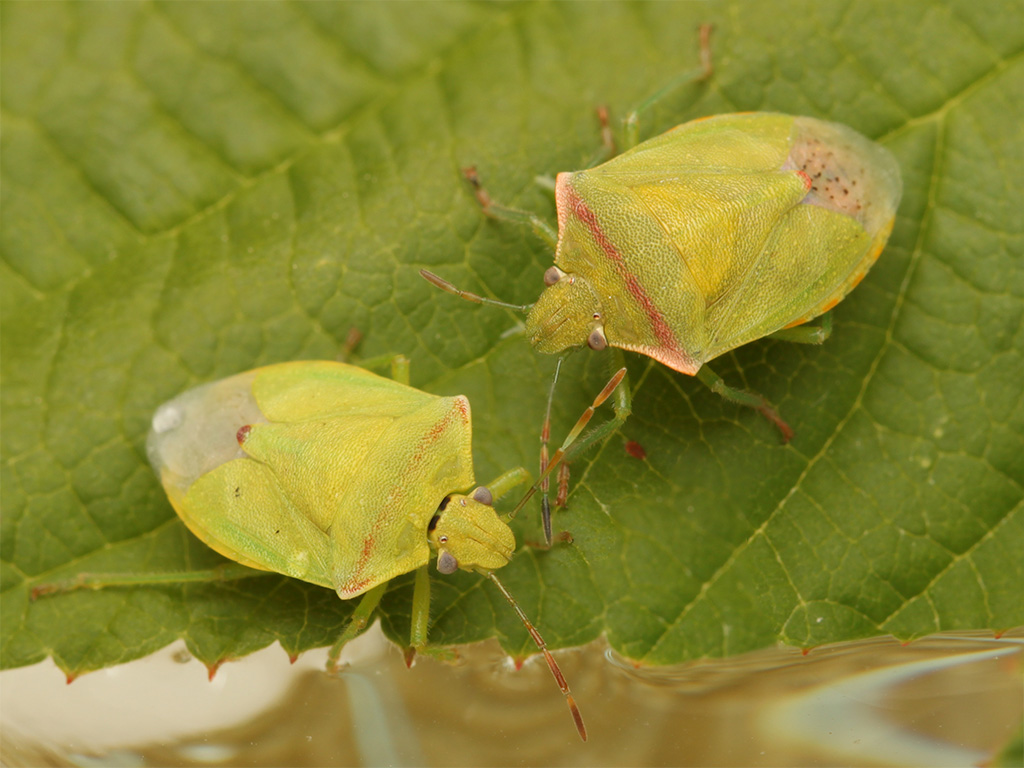 They look pretty much like ordinary green stink bugs, except that (1) they're very small, and (2) they have a thin band of reddish color stroked side to side across the middle of the pronotum.

Here they are shot against 1 mm grid paper. The first one is the same individual seen on the left above, so clearly the black band behind the head is just a transient gap between head and prothorax . 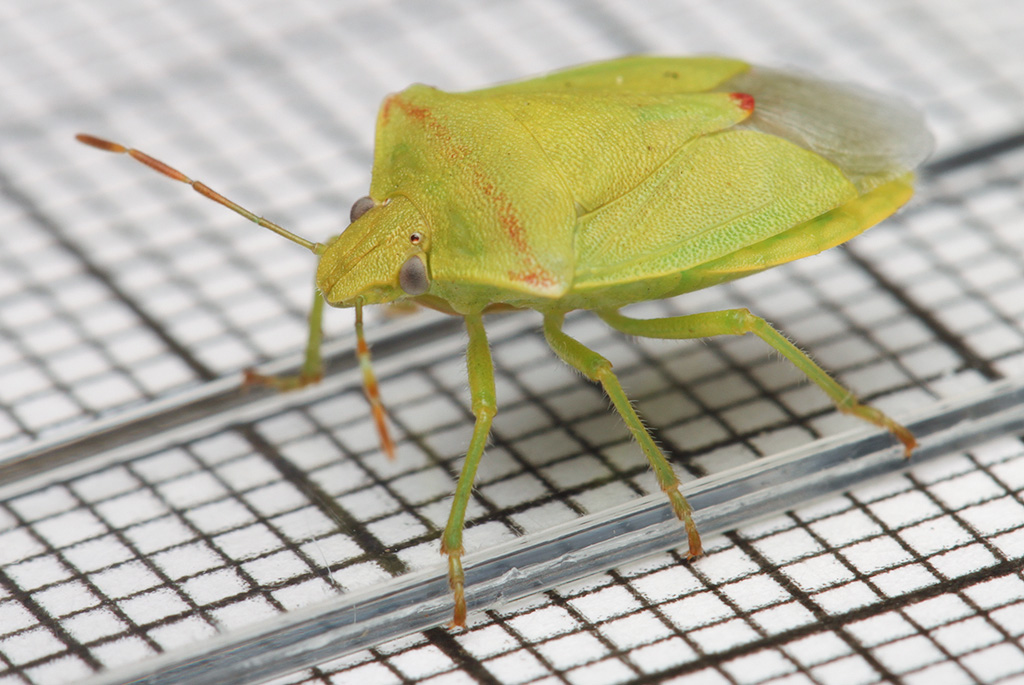 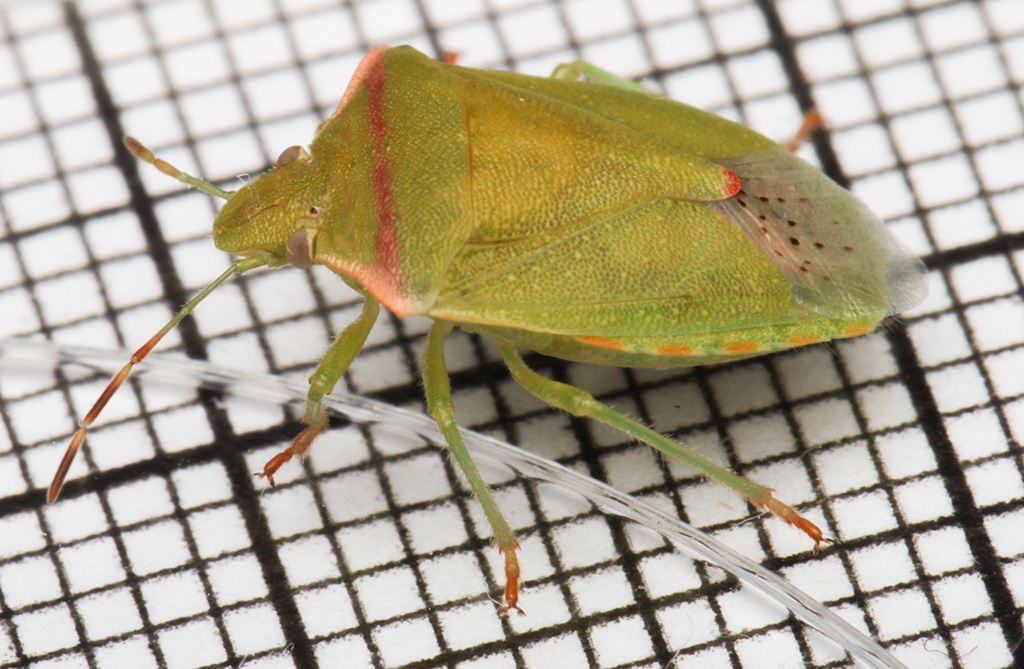 I've been finding these things on my raspberry plants. I have no idea what they eat; that's just where I find them.

My plan is to submit them to BugGuide.net for ID, but mostly for amusement I'm also posting here.

The amusement begins with the fact that these things are not inclined to stand still to be photographed, and they have only a little hesitation about taking flight. Fortunately I was able to bat the escapee out of the air before it got lost.

So then I figured "You know what? These are summer beasts. All I need to do is cool them down."

So I stuck their box in the refrigerator overnight, then to make Really sure that they didn't get away from the camera, I moved them onto a raspberry leaf that was floating on some very cold water, surrounded by floating ice cubes. That explains the water you can see in the first photo. 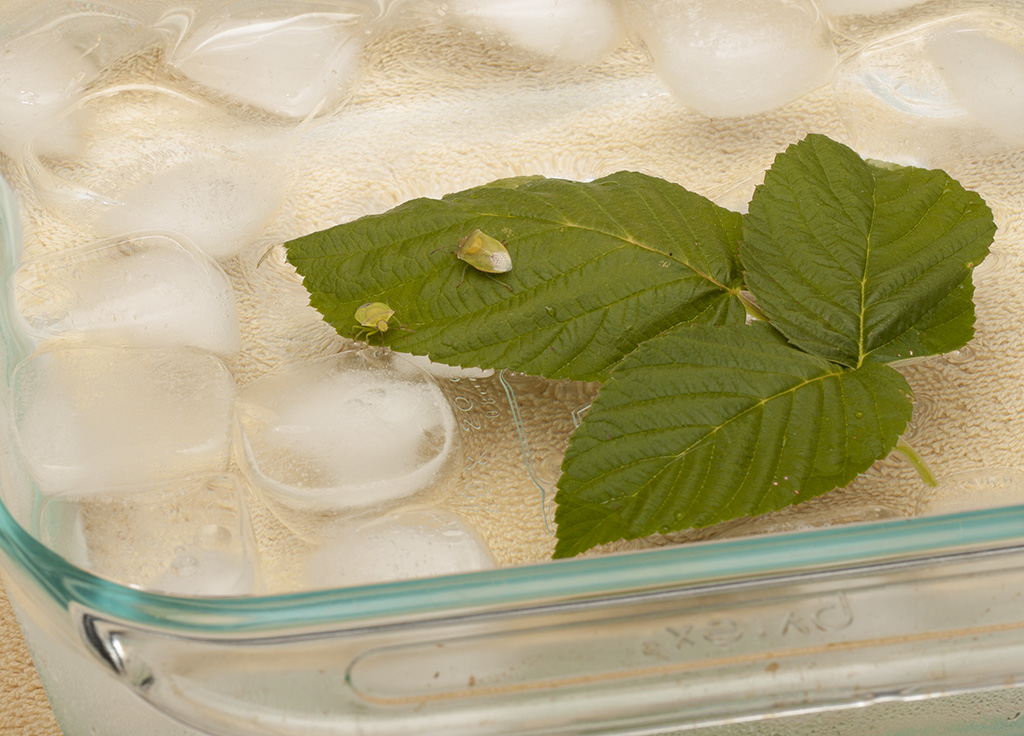 But what, you ask, could possibly be amusing about this? 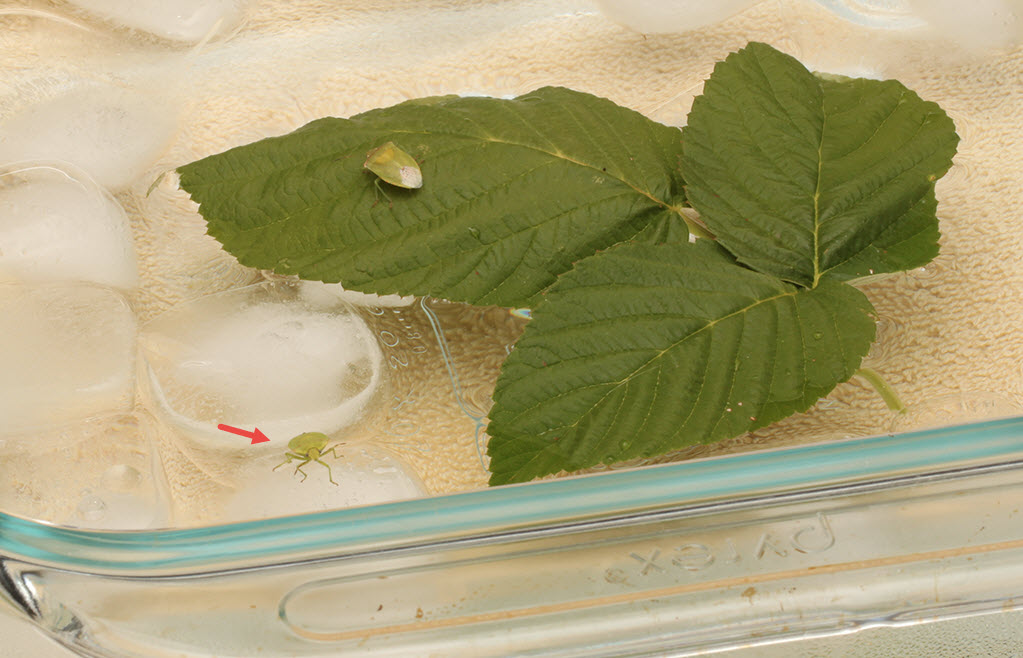 Apparently these things have quite a wide range of acceptable operating temperatures. It was 104 F outside today. Coming out of a refrigerator and walking across an ice cube, no problem.

I uploaded these to BugGuide.net and promptly got an ID of "Thyanta subgenus Thyanta".

There appear to be at least three species with very similar appearance, so any closer ID will have to wait for one of the specialists to chime in.

Nice set Rik. I have several species of those in my garden, one of the more populous bugs here.

And wow, what a great idea with the ice bath! I bet the technique is as old as water but I've never seen it before. So obvious when you see it. I can think of a couple of uses right away. Thanks for showing that.
Top

Beatsy, the water trick is one that I use periodically. It's way better than nothing, but not what I'd call foolproof. I have a small collection of "escaped" photos that show subjects who were only slowed down by the process. See for example the discussion at viewtopic.php?t=17295 .

Since bugguide has identified these bugs as nothing particularly interesting, I have released them to go do whatever it is that they do. 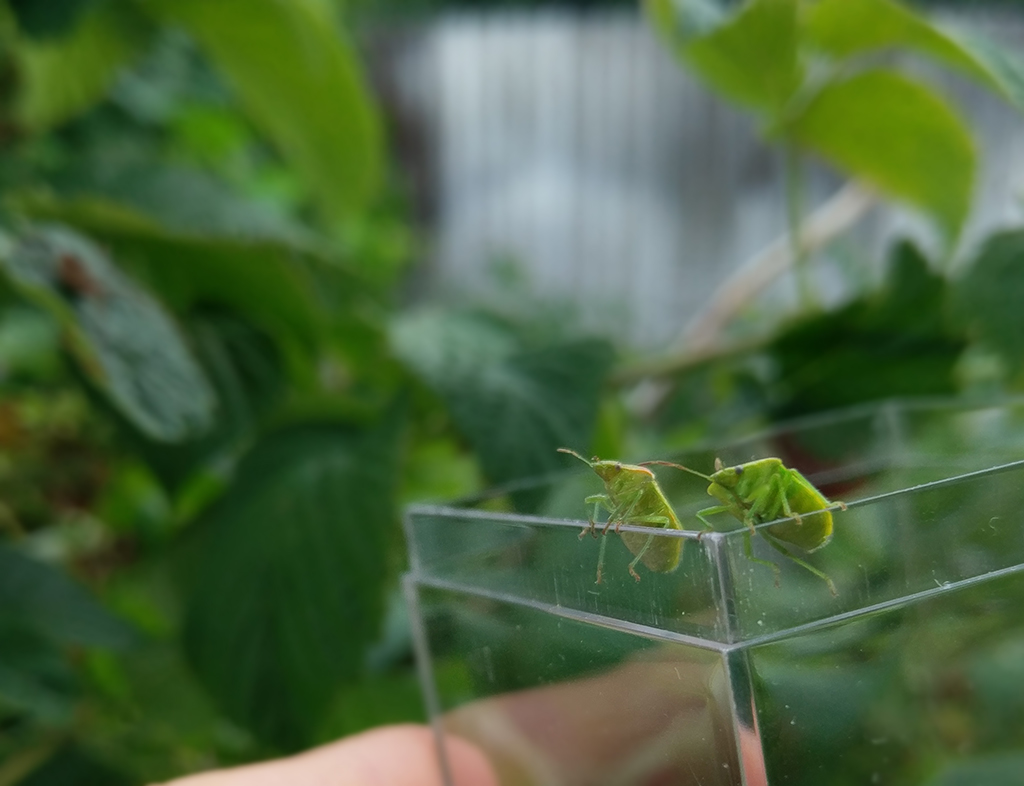 A few seconds later they were airborne and gone.

Very good!
It is interesting but not always good to see how the local flora and fauna changes over the years. There is ecological succession, where a habitat changes from grassland to forest. But of course human effects now also dominate what changes occur and those changed can be very rapid. There are effects from climate change, of course, and then from introducing invasive plants and insects or spiders.
I remember never seeing Japanese beetles, gypsy moths, European paper wasps, and Asian ladybugs even though those invaders were much discussed. But now these and others are very common in my area.
Mark Sturtevant
Dept. of Still Waters
Top

In my yard, the most obvious insect immigrants have been the large yellow underwing moth Noctua pronuba, the sachem skipper Atalopedes campestris, and the european paper wasp Polistes dominula, all well established and common. The native yellowjacket wasps are much less common than before, probably having been out-competed by the european paper wasps. Brown marmorated stink bugs are established but still at a low level; no sign of Japanese beetles yet. More broadly, large garden snails have moved in, and our lawn is covered by an array of worm mounds. Likewise in the garden, the zone under the mulch is virtually a continuous layer of worm castings. I guess the layer of worm castings is a good thing, but it's hard to tell because the plants are suffering rather badly from our current heat wave and a number of other difficulties that are not yet diagnosed. I am very grateful that there exist other people who are more successful at growing food than I am.