A close crop to show the ommatidia: 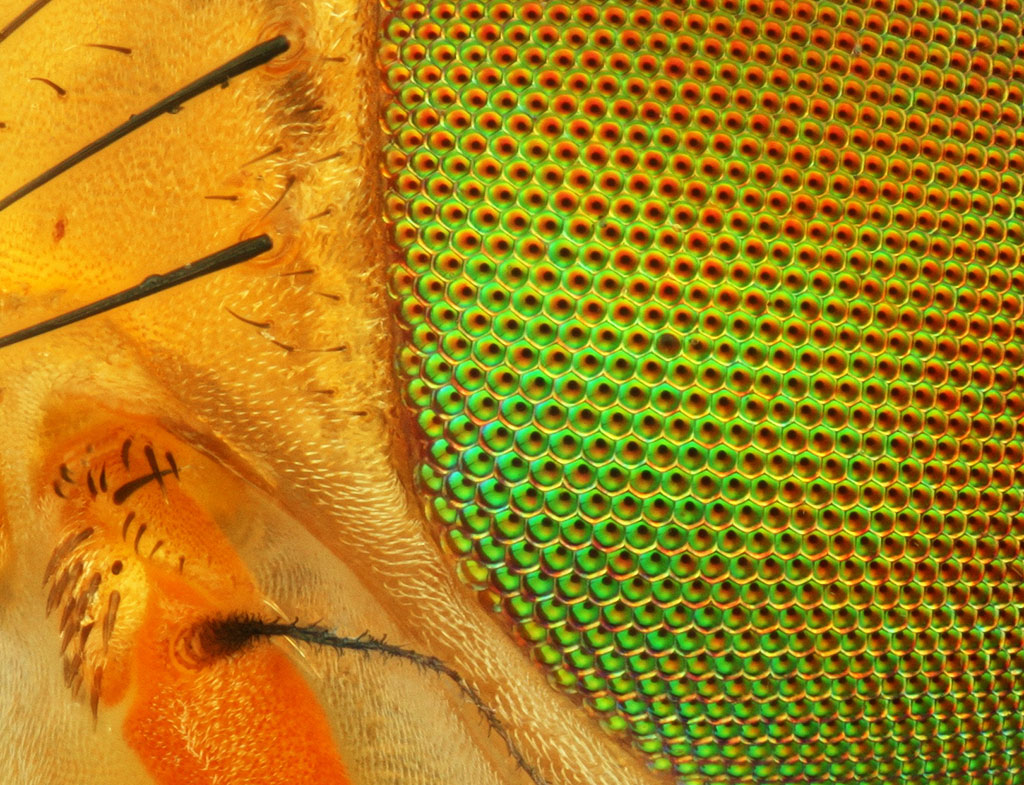 Here is a somewhat wider view, as crossed eye stereo.

I have focused on other aspects of the beast in earlier posts, HERE and HERE.

The maggots of this little beast are highly annoying, because they routinely ruin cherries from backyard trees and have the potential to ruin commercial growers' businesses. People in my area are obligated by law to kill them, if there is any chance of them spreading to a commercial orchard. I think that mine are technically exempt from that law because of location, but I try anyway because they ruin my cherries. The effort is always less than 100% successful.

Nonetheless, the eyes of this beast are strikingly beautiful. In a live specimen, in bright light, under magnification, they flash with intermixed green and copper. Sometimes I think they would make a good model for some animator's dragon.

All that noted, for some reason I have never done a high mag treatment of the eyes before now.

It seems the color is structural, coming from the very surface of the ommatidia, and with a color that varies depending on angle.

There is considerable difference between the eyes of different specimens. I'm not sure if this is a difference in the way the specimens have been treated, or if it is something intrinsic to the individuals.

The above specimen was kept refrigerated for a couple of days, until it had stopped moving when warmed but still appeared fully hydrated. When I processed the stack, I found that it had only appeared to stop moving. Fortunately Zerene Stacker automatic alignment was able to keep things lined up acceptably, when I gave it the freedom to rotate also. The stack would be amusing as a movie, but I'm passing up that opportunity for now. Anyway, I would characterize that specimen as "live, but barely".

The specimen below started out in similar condition, so I gave it an hour to soak in ethyl acetate fumes to prevent any further movements. That worked fine as far as the movements were concerned, but then I noticed that especially the green color was muted so the eyes were not so interesting. I did not really check the colors before the ethyl acetate, so I don't know if that was responsible. It seems there are always more questions.

I also used a different orientation for this second one, to show the anatomy of the mouthparts more clearly. Besides, I kind of like the perspective of looking up at the fruit fly looming over me.

Canon T1i camera, Mitutoyo M Plan Apo 10X and 5X on Raynox DCR-150 at normal extension. The stereo pair in image #3 is almost the entire frame, so about 4 mm from side to side.

By the way, I do not know what causes the one dark ommatidium in the first photos. I did not even notice that until I was posting this, despite the happy hour or so that I spent cloning out debris on those images.

So, I was busy doing other things for a couple of days, while the second fly just sort of sat there drying out. 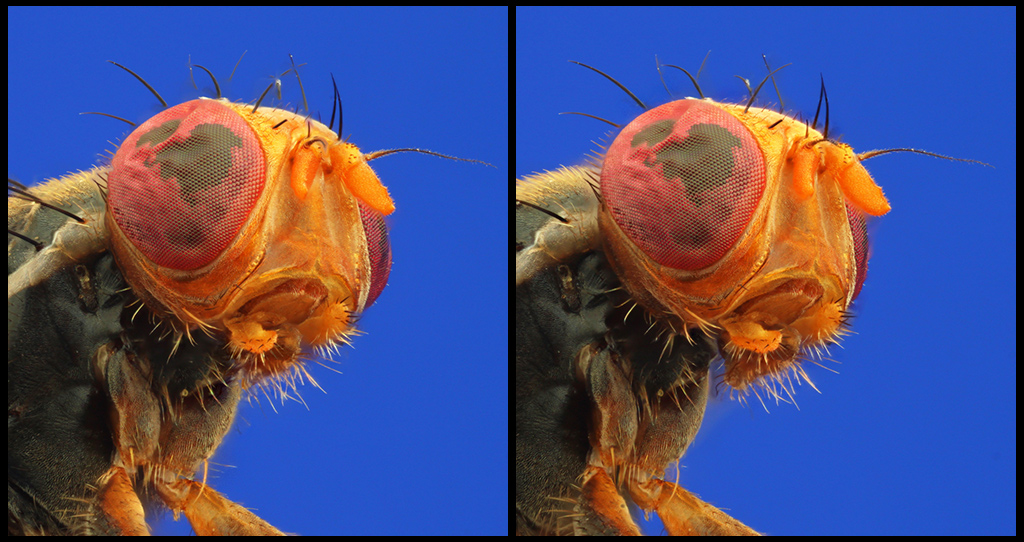 I think it's pretty clear that these flies do not hold up well to simple drying...