Mayfly molting from subimago to adult

Mayfly molting from subimago to adult

There's a backstory, of course.

A couple of nights ago, a mayfly landed on my hand while I was standing in my yard doing nothing in particular.

When I looked at it, I was surprised to see that it was a relatively large species with the greatly expanded eyes of a male. I say surprised because, in my yard, I've only ever noticed greatly expanded eyes on a tiny species. I also noticed it was a dun (subimago), and quite placid, so I figured I might gently transport it inside so I could get some pictures of the adult after it had done its final molt. There seemed lots to go wrong with that plan, but nothing ventured nothing gained.

Transporting it inside turned out to be simple -- the beast was really very placid. I didn't think very hard about why it was so placid, until I had gotten out my camera equipment, taken a handheld test shot just to check out flash brightness, and noticed a couple of transparent flaps hanging loose behind the eyes. Whoa! The molt had started already!

So, over the next few minutes, I continued to shoot a series of handheld shots, trying hard to not move, while hunched beside a table bracing an MPE-65 as best I could with a spare finger, while watching the action in real time because I figured the odds were not great that the photos would be usable.

Fortunately I got lucky about that last part -- the photos actually were usable. I assembled 17 frames of them, aligned by hand, to make the animated gif shown above.

Watching the animation, I am struck that the adult somehow extracts itself from the old skin without aid of gravity, and without obviously pushing on anything. I assume there's some pushing going on somewhere, but I cannot see where. If anybody knows how this works, I would appreciate learning the trick!

After the adult had hardened for a while, I was able to get some good single shots of the eyes. Here is one I like: 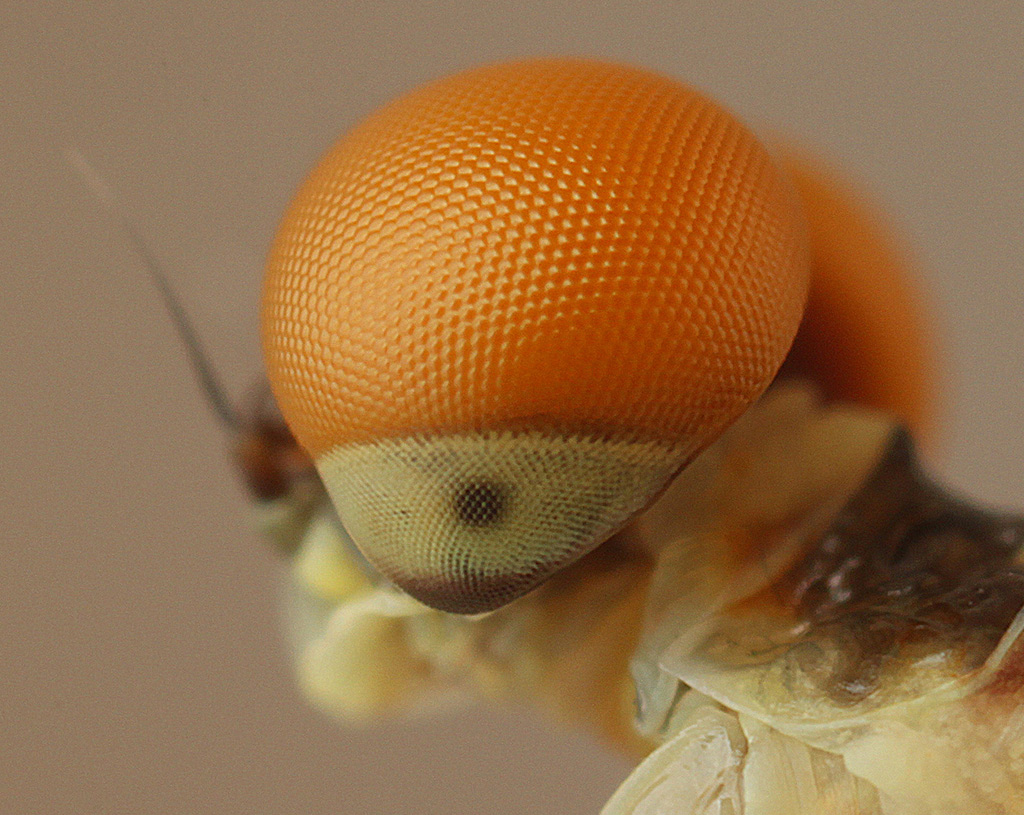 Then I released the beast to go play with its friends.

Today I shot the shed skin. These crossed-eye stereos are two single shots, using the cha-cha technique with camera on a 4-way rail on tripod. 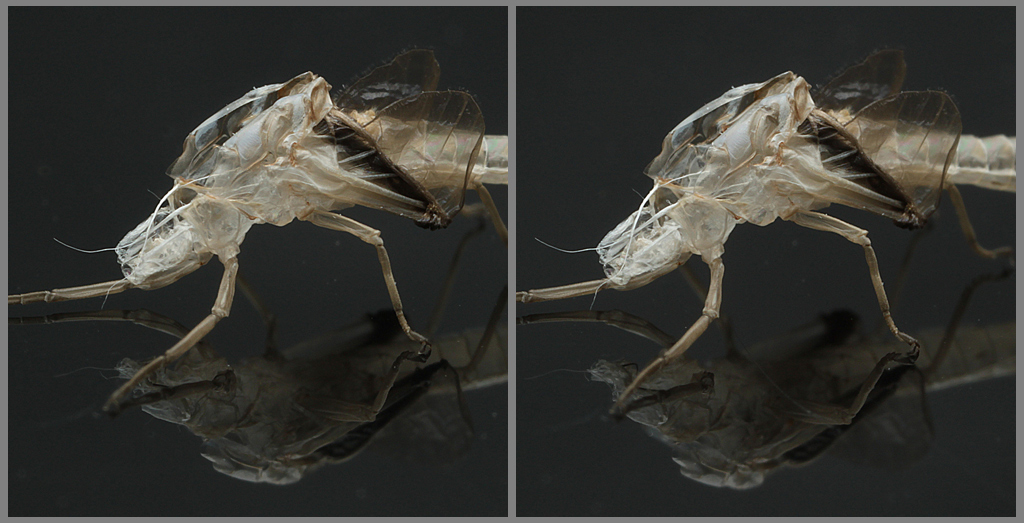 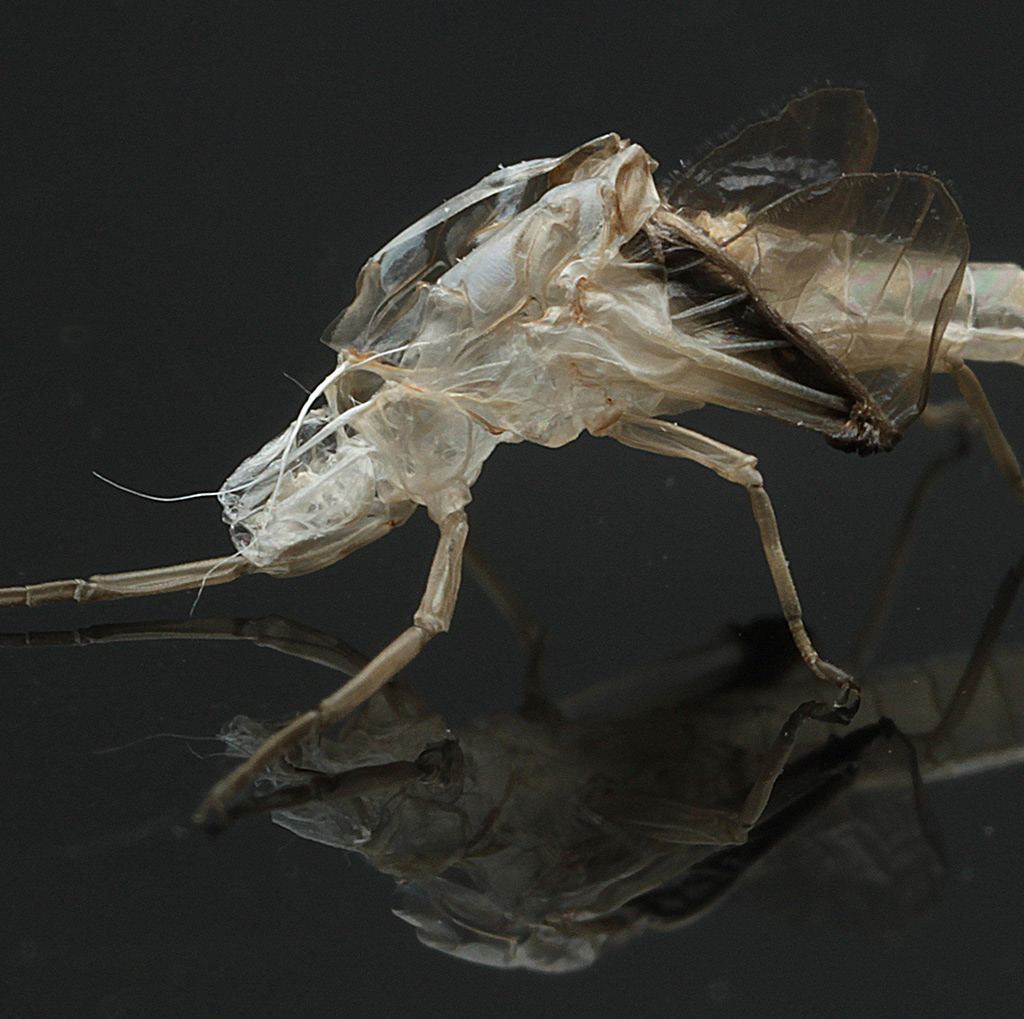 Rik - it looks to me that the claws of the old skin legs are not moving - perhaps these are dug in or stuck to the table with enough adhesion to enable the fly to push itself out?
It's not what you look at that matters, it's what you see - Henry David Thoreau
Top

Right, the claws of the old skin are not moving on the plastic box. I don't know exactly how they're sticking to it, but there's definitely some weak adhesion there.

However, that doesn't affect the aspect that is puzzling me.

What's puzzling me is that the adult coming out of the old skin is not touching anything except the old skin. So what's making it come out?

I can only assume that the emerging adult is subtly pushing on the old skin somehow or other, but I have no clue what it's doing that with.

It's not like the old skin is stuck to the plastic box, and the adult is dragging itself out by pulling on some other part of the box.

Instead, this seems more like the trick that a mosquito does, emerging onto the surface of the water while leaving the pupal skin behind. But I don't know how that trick works either.

I expect this is a female of the same species. She turned up on my screen door this afternoon.

This is a short studio stack, 4 frames at nominal f/8, 5X, cropped to match the male eyes. Live subject released to go play. 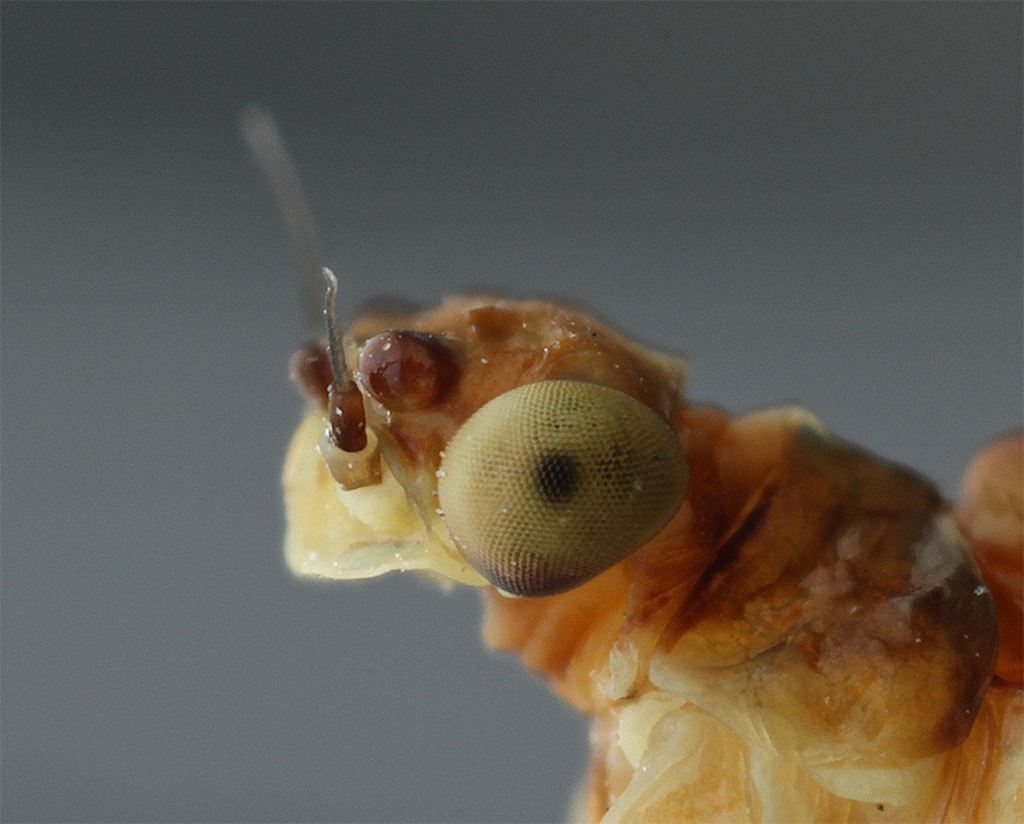 Here are the two heads, laid up for easy comparison.

Amazing animation, Rik! Your photos are great, but I like your stories about how it happened even more. I feel excited as if I was there and I already want to run with the camera
== best Pawel
Top

Always when I found crab shells on the beach, I could imagine how the thorax appears from the molt, but less so how the new legs would come from the old articulated legs. It just didn't seem possible, topologically. This series at last shows how they may do it. The huge claws, especially of the lobsters, are still a mystery to me, even now.

I guess the driving force comes from pneumatic expansion, like the pumping of the butterfly's wings after it emerges from the pupa. Apart from absence of movement, the acceleration and deceleration are suggestive of that. It appears to me that during the escape the rings of the abdomen are expanding, lengthwise.

And where did it keep its appendages?
--- felix filicis ---
Top

Well that is something you don't see every day! The molt from winged (and in many species weakly flying) sub-imago to imago (adult) is one of the oddities of insect-dom. Why do they do it? It is suggested that this is a relic of the time when adult insects used to continue molting.

Molting is largely done by fine muscular contractions. The process is a bit like peristalsis. It would be hard to see this in a small insect, but if you watch it in a large insect, its pretty obvious.
Mark Sturtevant
Dept. of Still Waters
Top

Thanks for all the comments and info, guys!

iconoclastica, as far as I know all the major appendages are formed inside corresponding parts of the old skin. Smaller features like bristles are formed totally new; see for example viewtopic.php?t=37664 (moth) and viewtopic.php?p=172325#p172325 (wasp).

For this mayfly, the new tails and front legs are much longer than the old ones, so I suppose their new exoskeletons grow in some compressed and stretchable form, perhaps pleated something like an accordion, and then expanded by pumping fluid from the abdomen after emergence.

Pawel, almost all my photography is motivated by curiosity, so for me the backstory is an important component. I'm always pleased when other people share my enjoyment.

Mark, thanks for the analogy to peristaltic waves. I have seen that a lot with caterpillars, especially with hanging pupation where it's clear that the skin is being slid back along the emerging pupa while nothing touches substrate except for the rear prolegs and then the cremaster.

There's another perhaps surprising detail of the molting process that might go unnoticed, but shows clearly in these pictures if you know what to look for.

The surprising detail is that it's not just the outer skin that gets shed; the linings of the larger tracheal tubes also get pulled out. As explained by Wikipedia,

All cuticular structures are shed at ecdysis, including the inner parts of the exoskeleton, which includes terminal linings of the alimentary tract and of the tracheae if they are present.

Marked here, I believe, are the linings of some tracheae: 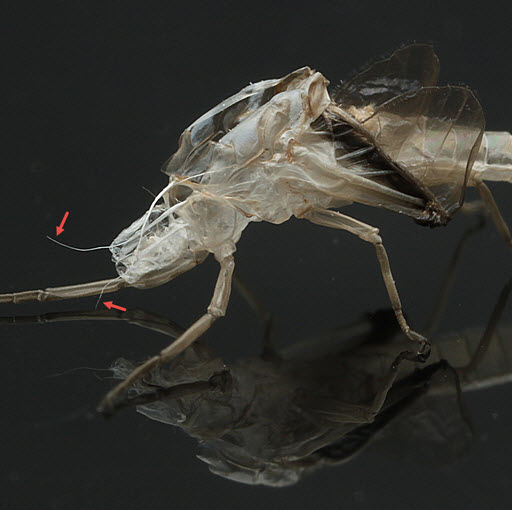 Those are the trachea. I think the cuticle must be turned inside-out as the insect pulls free. Seems strange to molt and effectively rip out the inner lining of your lungs in the process!
Mark Sturtevant
Dept. of Still Waters
Top

Fascinating info and great photos. I love the stereo of the shed skin - it’s remarkable!

Very good animation and faszination single shoot, too. Thanks for your link. I missed this publication.

May be your animation is an incentive for me to try it myself with the 12 single shots.

An interesting series very well photographed.
I like the turban eyes very special.
Thanks for the pictures and the accompanying text.