This beetle, Eusattus muricatus, is sort of a member of the "bumps-and-spines" club, but it's quite different from the other ones that I've shown, HERE and HERE.

Let's start with an in-the-wild shot. I literally ran across this individual yesterday, while out enjoying some nice spring weather. Fortunately I had my cell phone with me. This is a live beetle crossing a sandy trail near the Columbia River, HERE. 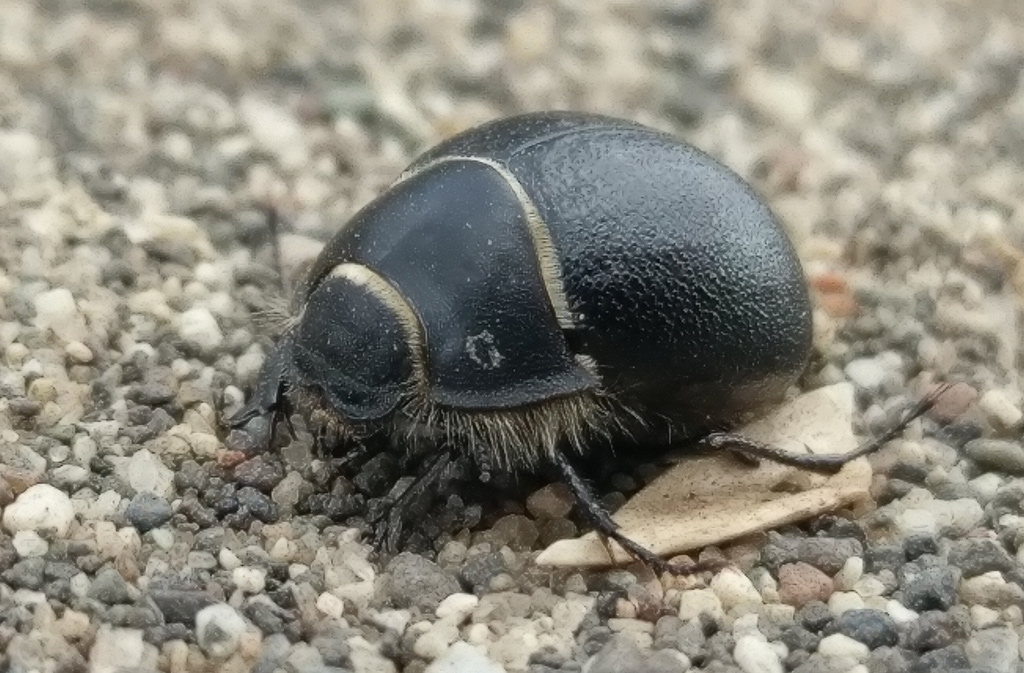 In the field, the most distinctive features of this species are its general body form and its two bands of golden hairs, which form a sort of dust seal between the prothorax and the head and elytra. Also it is always found in or very near sand. The species key in "Darkling beetle populations (Tenebrionidae) of the Hanford site in southcentral Washington" lists "occupies sandy habitats" as a diagnostic feature. In "Population Structure of a Sand Dune—Obligate Beetle, Eusattus muricatus, and Its Implications for Dune Management" (HERE), the authors describe the species as "flightless, fossorial, and restricted to very sandy, friable substrates, especially colian dunes". I had to look up "fossorial" -- it means "burrowing". I tried to look up "colian", but that failed miserably. If anybody knows for sure what "colian" means here, please share!

Anyway, this beast is highly adapted to sand. The shapes of its legs and claws actually remind me of aquatic beetles, except that they're missing the hairs that often appear on legs modified to serve as paddles.

Here is a different individual, this one dead of unknown causes, left in its posture as found. The bed of sand is new, but maybe this would be a "natural deathlike position"? The tendency of the legs to sweep backward, as shown here, is also evident when trying to mount relaxed specimens. 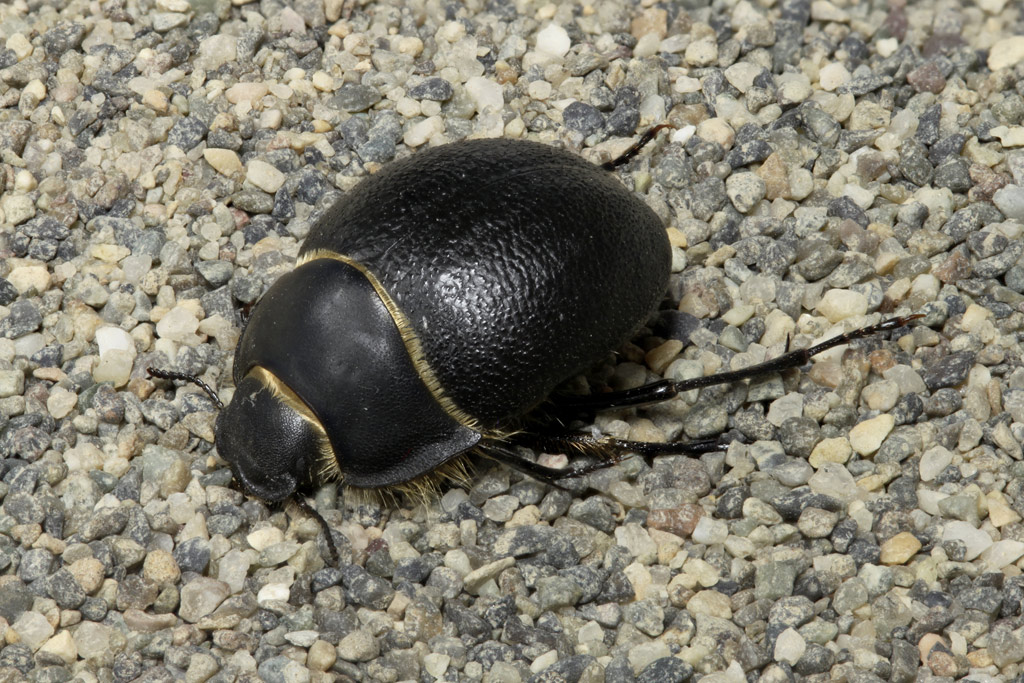 We might expect that the hairs of the dust seal would point consistently backward, but actually they're all on the prothorax, projecting backward onto the elytra but forward onto the head. 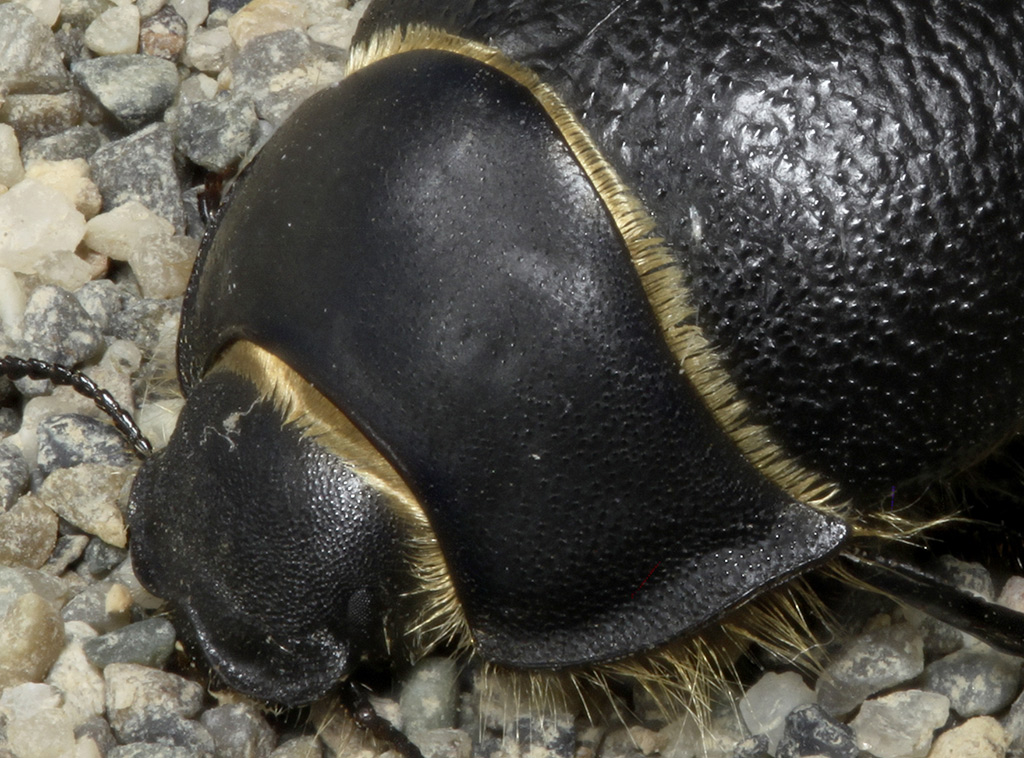 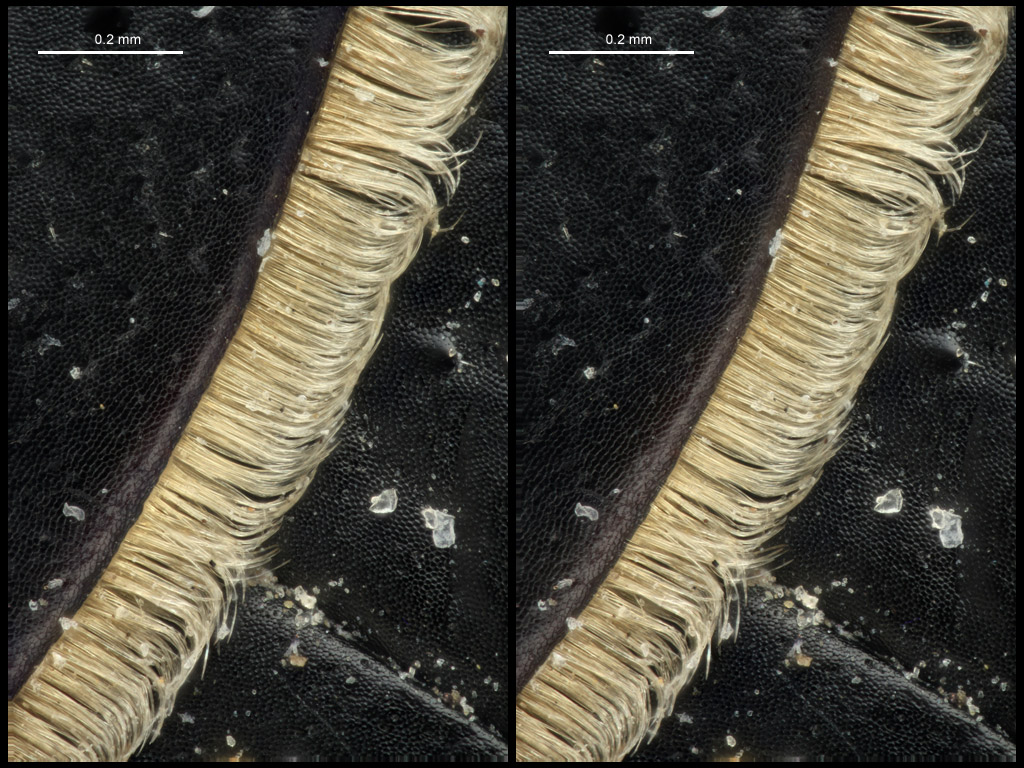 Here's another shot of the legs, and a stereo pair of the middle foot. I was surprised by the long, thin, only slightly curved structure of the claws. In the other members of this family that I'm familiar with, the claws are robust and strongly curved. I suppose the structure seen here is another modification for moving in sand. 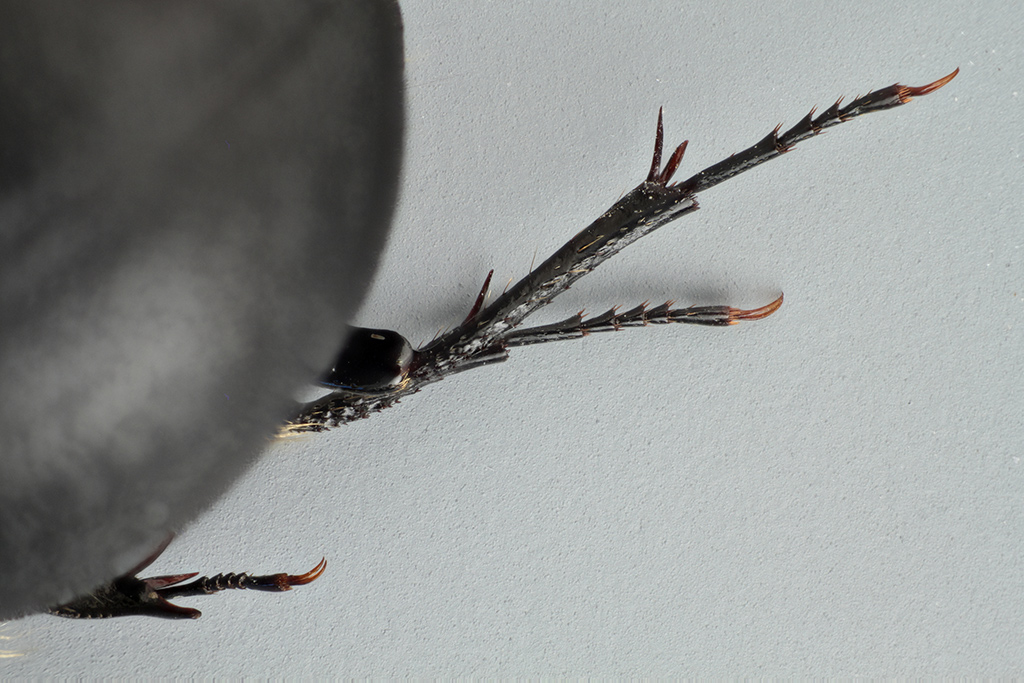 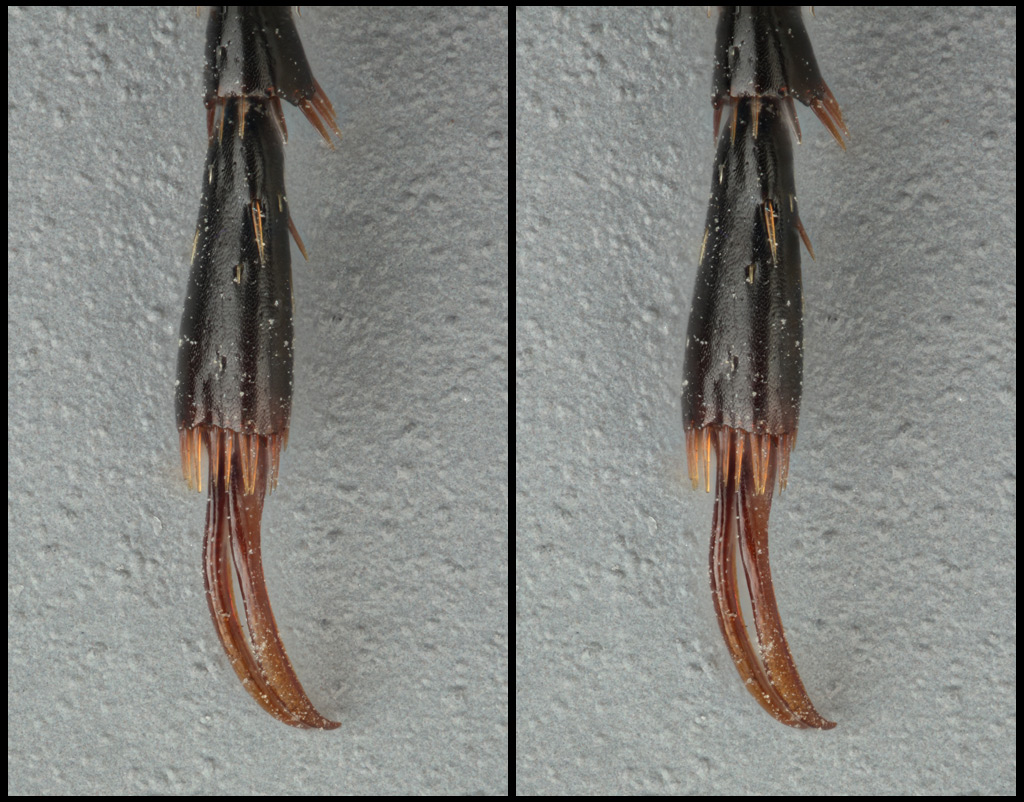 Finally (OK, actually it was first), I had to look at the "bump-and-spine" structures. This beetle has sort of the same topology -- bumps with backward-pointing hairs coming from the backs of the bumps -- but everything has been modified and rescaled so that I think there's no doubt here that the hairs must be for sensing, not for any sort of mechanical armor. Instead of stiff black spines or bristles, these are thin, bright, and often reduced or missing altogether. You can also see a small one in the stereo pair of the hair seal, shown above. 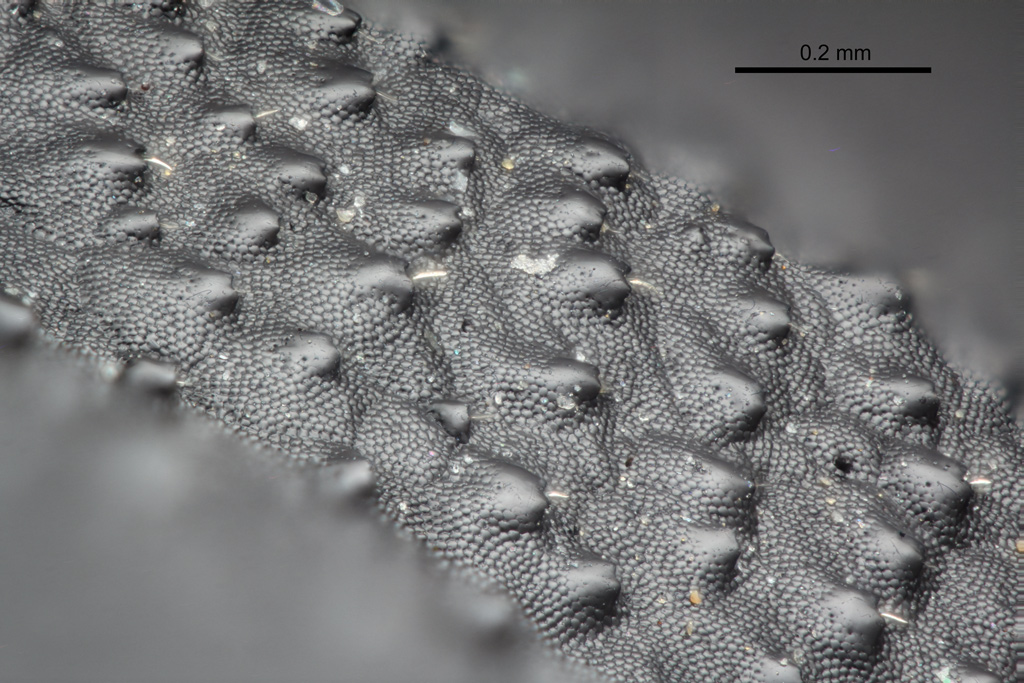 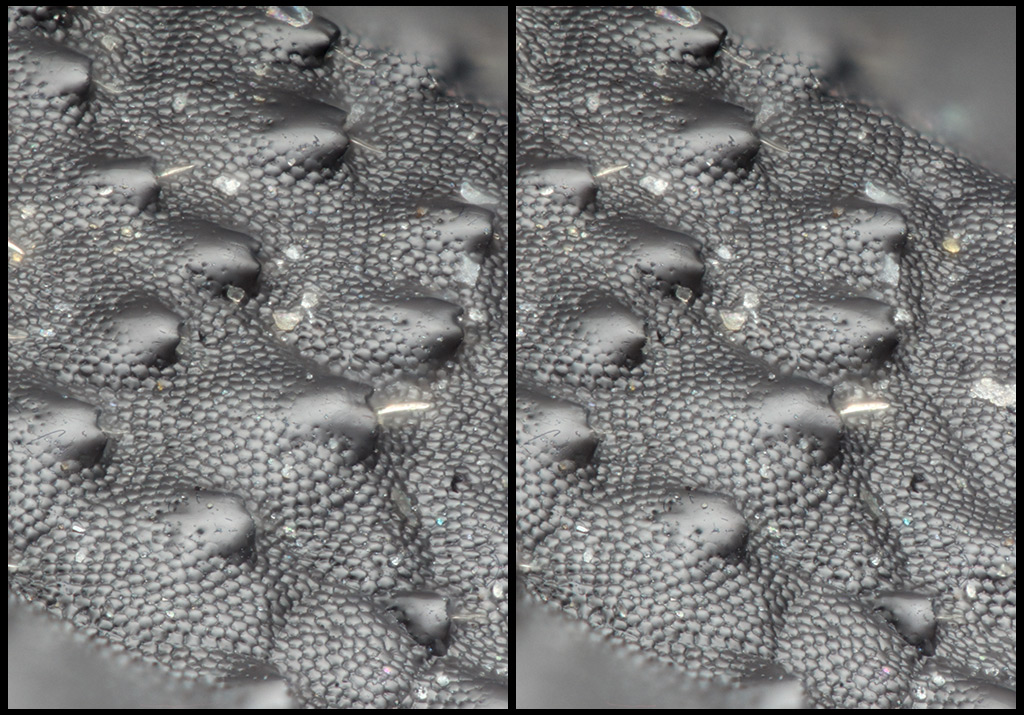 From the standpoint of photographic technique, the most interesting thing here is that I got best results by completely reversing my normal process for slabbing and stacking.

Normally I slab with PMax, then stack the slabs with DMap. If necessary I then retouch from the slabs, which again are PMax.

But with this subject, that approach produced way too much "glow" around the small golden hairs next to the bumps. So after scratching my head for a while, I switched gears and slabbed with DMap, then stacked with PMax. There was enough depth separation that in the slabs the hairs could always be seen against totally unfocused background, so it was not difficult to choose a contrast threshold setting that masked all the unfocused stuff and gave a clean rendering of the hairs. That was a first for me.

"Colian" might be a typo. There are "eolian" a.k.a. "aeolian" dunes, which are described here: https://www.nps.gov/subjects/geology/ae ... dforms.htm
Excellent pictures, as always!
Mark Sturtevant
Dept. of Still Waters
Top

Good idea! I think it's an error in my reading of a low-resolution image scan. The pattern of pixels looks so much like a "c" that I did not even consider "e". But on careful study, at 800%, I now see some other e's that look almost identical. Given the context, I'd be willing to bet that the original paper shows an unambiguous "eolian".

Very interesting Rik. I came across a similar beetle a few days ago and have taken a number of photos that I hope to post tomorrow. When I was a boy living in the mountains near Yosemite, these were known as stink beetles. When disturbed, they would lift up their hind end and emit an odor. They were easy to locate, as they would bore a cylindrical hole in the soft soil and would come out if we spun a pine needle in in thier hole.
I have to wonder if the hairs might be used for boring purpose's...........Bill
Top

So perhaps Colian is an anglicized perturbation of hill?
Top

Nice images, their roundness reminds me of Bolbelasmus, guess digging does that to beetles

frustrated me that I couldn't find what colian meant, so I took a small google dive - it seems to be a common OCR error for "eolian" ie wind-processes. Which would also explain why it's hard to find a definition of it. See here for example https://link.springer.com/referencework ... 4520-4_134
Top
Post Reply Previous topicNext topic
7 posts • Page 1 of 1