My wife and I took an anniversary stroll in the nearby park. We hoped to look for warblers as the spring migration through northern Illinois draws to a close. We struck out on warblers, but as we walked home I noticed some tiny doli flies on the leaves of skunk cabbage growing along the bank of a small stream. I returned several hours later with a "bug cup" and collected one. The body of this fly is pale grey, unlike the metallic green, and gold of Condylostylus species. The eyes have lovely stripes and the wings are spectacular. 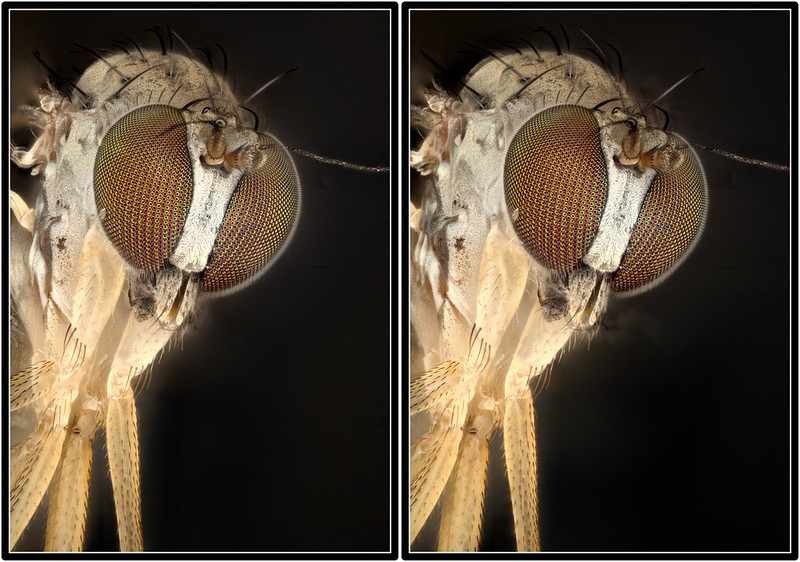 Always nice to see stereo images but you need to be aware of window violation, your brain detects it is an impossible situation :-

you need to be aware of window violation, your brain detects it is an impossible situation.

I went to the link and read about 3D window violation. I am more familiar with various Windows 10 violations. I commit them frequently.

I have the good fortune of easily perceiving stereo in 3D pairs. Or perhaps it is a curse. Stereo images that drive others batty due to floating foggy patches etc I don’t even notice. So, because of my “gift”, I don’t spend much time post processing stereo images to clean them up. If the head looks roundish, the antenna project outward and don’t project inward I declare victory and move on. But I realize others may be more sensitive to violations that may be in my images. Apologies if they bother you!