Hybrid Rhododendrons are a new one to me (Azalea/Rhododendron?). I found them blooming here recently at the University of North Carolina Arboretum, Asheville, Azalea Repository. Eastern Swallowtails and Bee flies were enjoying them immensly. 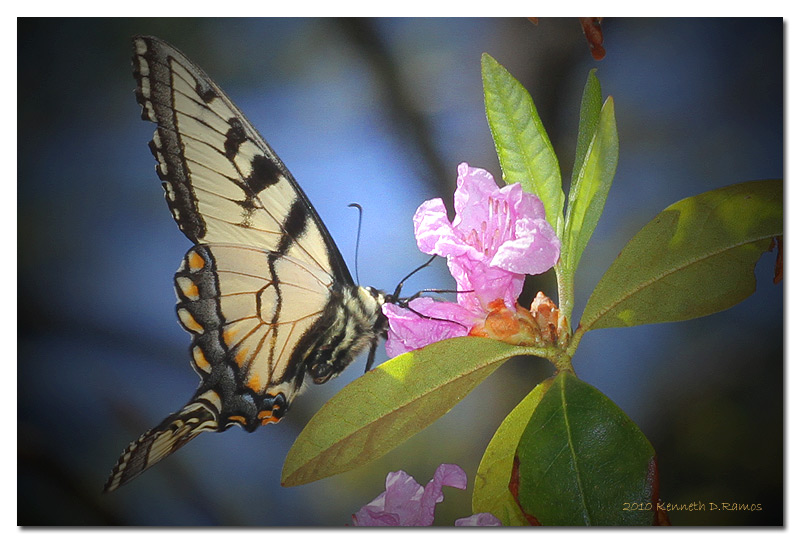 Nice Tiger Swallowtail Ken.
Your species P. glaucus is significantly larger than our northern species P. canadensis.
NU.
student of entomology
Quote – Holmes on ‘Entomology’
” I suppose you are an entomologist ? “
” Not quite so ambitious as that, sir. I should like to put my eyes on the individual entitled to that name.
No man can be truly called an entomologist,
sir; the subject is too vast for any single human intelligence to grasp.”
Oliver Wendell Holmes, Sr
The Poet at the Breakfast Table.

The P. canadensis that NikonUser speaks of is another great example of how names change over time. When I was a kid, all of the eastern and northern populations were lumped together and known as Papilio glaucus. After a while, it became clear that there was almost complete reproductive isolation between two big groups, which then got split into canadensis and glaucus. Sometime in the last few decades, the whole Tiger Swallowtail group got split off from the Old World swallowtails, forming a new genus Pterourus. Then on review of the recorded play-action, the referees decided there wasn't enough difference to support splitting, and pushed everything back into Papilio. Unlike sports, decisions of the zoology referees are never final, so I would not be surprised to see the names revised again at some future time.

With all the work in genomics going on these days, I would imagine a lot of things will begin to change in name and as to where they belong.