Snap shots from the field, no outstanding photography, but fascinating natural history some of you might be interested in: 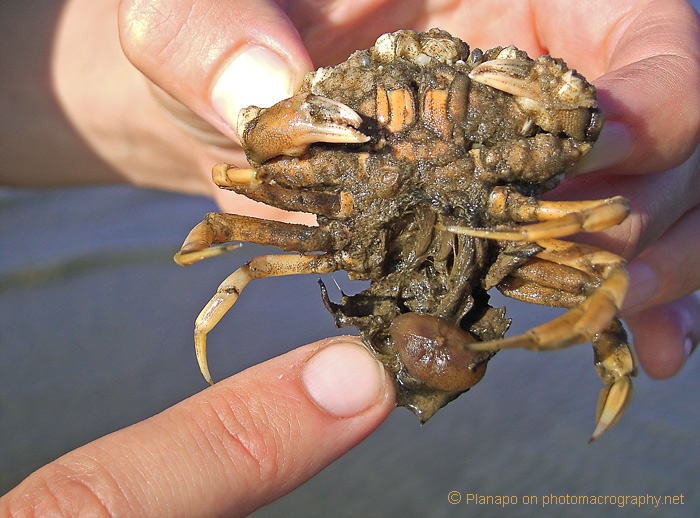 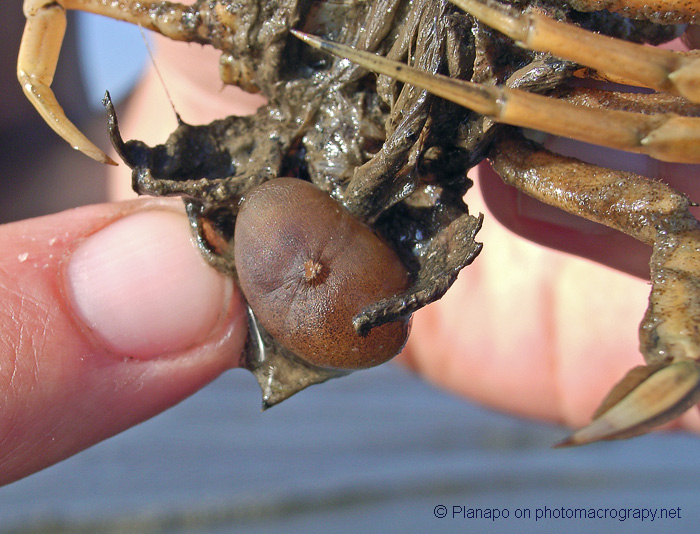 What you are seeing here in the first picture is literally a handful of Crustaceans: One widespread crab species (Carcinus maenas), on this crab are growing some barnacles. Barnacles belong to a crustacean group called Cirripedia.
A sub-group of these Cirripedia are the Rhizocephala, fascinating internal parasites! And yep, there is a nice specimen of the rhizocephalan genus Sacculina in this picture: The potato-like object under the crab's pleon is not the crab's "sore bum"

, like one of my companions suggested when I was showing my find around. It's the outer reproductive part, called "externa", of a female Sacculina, species should be S. carcini.

The other part of the female Rhizocephalan, called interna, is a root-like system similar to the hyphae of a fungus (hence my title for this posting) that grows inside of the host. This hyphae-like root system of the endoparasitic Sacculina female grows through the entire host, reaching up to the tips of the crab's legs and embedding all of the host's organs, absorbing nutrients from the haemolymph.

As said, the externa is the reproductive part, a "brood sack" where large numbers of eggs are produced (in S. carcini several 100k per batch), fertilized and the larval development to a certain stage takes place there until the larvae are released through the central opening you can see in the pictures in the center of the externa. After the free-living Nauplius and Cypris stages, the Sacculina-Cypris will attach to a new host, develop into a so-called Kentrogon stage which has a sting to insert only a few cells into the host. From these cells a new interna will grow inside the new host and will finally break through the host's exoskeleton and grow a new externa. The male development stops at the free-living Cypris stage, and this larval male transfers cells to the female from which sperm cells will develop inside the female externa that will fertilize the eggs.

Admittedly, one may find Sacculina (and the other Rhizocephala) a bit "gross". But to me it's a fascinating case of parasitic evolution where the morphology and physiology of a presumably barnacle-like ancestor got completely altered to a form that morphologically could hardly be recognized as a crustacean anymore, if it wasn't for the Nauplius and Cypris stages.

Animals were found in Nationalpark Wattenmeer. This national park has just become a UNESCO world heritage site (www.waddensea-worldheritage.org/index.php?id=1&L=0). Shot with p&s Ricoh Caplio GX. As you can see, it's nice to have companions in the field, they can be used as effective "macro stands".

BTW: How does my title sound? Could a native English speaker have put it this way? You know, when word-smithing in the foreign language I am sometimes a bit unsure how my wordings sound to a native speaker ..

The English is fine throughout, and the story is fascinating, and I'm glad I don't like to eat shellfish, and my mushrooms will be extra well cooked!
Top

Fascinating indeed -- I had no idea that such creatures exist!

About the title, I probably would have said "gone fungal", that being the adjective form.

The analogies that come to mind are things like "X gone bad", "Y gone wild", "Z gone crazy", and so on. There is one standard phrase "gone ape", which is sort of a combination of gone wild and gone crazy, often with hints of hedonism, debauchery, and/or violence thrown in. There's also a collection of phrases like "gone to the dogs" (degraded over time). But in general I think the adjective form would be more common.

Yes, that sounds more like something Hollywood would produce.

The body of your posting is college-level English, of course. But you knew that already.

"Gone fungal" to me implies that it has fungus all over it.

In English, use of a noun as an adjective isn't unusual, if I can go teacher on you, but the singular form is much more common, even if there's a mismatch in number. On first discovery of the egg-laying duck-billed platypus, the headline might read
"Mammals gone reptile".

"Fungi" is slightly odd in that it's often used, incorrectly but just about acceptably, as though it were a singular. There have been examples of that on this forum recently!

We're routinely sloppy about use of plurals, something which you've exemplified beautifully. I didn't notice until I was looking for evidence of a non-native English writer. This therefore, is NOT such evidence!
"Barnacles belong to a crustacean group called Cirripedia.
A sub-group of these Cirripedia are the Rhizocephala".
Top

These differences in language usage are always interesting.

I immediately understand what "go teacher" means. But it still strikes me as an odd construction, so I presume I don't encounter it very much. Likewise for "mammals go reptile", though that one strikes me as less odd. Perhaps a matter of being used to short pithy headlines.

As for "go fungi" or "go fungus" or "go fungal", I guess there's no good way to predict how they'll strike any particular person. I even tried Google-checking and didn't get any decent info. The three phrases report counts of only 561, 342, and 274, and none of the hits I looked at meant "in the style of". Most of them are either "go fungi hunting" or "go, fungi" (coincidental occurrence in two adjacent clauses). Where they meant changing state, it was always to become infected, and that seemed about evenly split between "go fungal" and "go fungus".

And for the plurals, I'll just offer the observation that "Plural nouns are an interesting topic." Have fun with that one.

For those who feel compelled to grapple with the peculiarities of the language which separate us, there is of course the book "Eats shoots and leaves".
An advanced text, which plumbs the depth further, would be this one.
Top

Geez! A guy learns something new almost every day around here and I thought cordyceps was frightening!

Great photo by the way there Betty and a great write up!

Really facinating, thanks for posting.

Thanks for your comments and the interesting details on the lingo!

Yeah, "gone ape" something alike I had intended.

Bummer, "gone fungi" sounded so "wicked cool", but obviously and unfortunately just to me

, so I follow the "natives" and have changed the title to something more conventional.

Hmm, I think "reminiscent of" would be more usual, but, since you mention it:
"Crustacean apes fungi" would do quite nicely!
Top

ChrisR wrote:"Crustacean apes fungi" would do quite nicely!

That would be a marvelous headline! It's cryptic and grabs attention at first glance, but makes perfect sense after you read the article.

Thanks Chris and Rik!

I have edited the title to: Parasitic crustaceans ape fungi.

(I've just chosen plural to refer to the Rhizocephala as a group. Does it still sound ok that way?)

Yes it does. I tossed it around and left it as I said because at first look it's just a list of animals without the adjective, more like a UK tabloid newspaper headline!
They love short puns, like, er, "Cat dogs postman"

Excellent find and fantastic information. It is one of those things that make science and nature amazing.
Take Nothing but Pictures--Leave Nothing but Footprints.
Doug Breda
Top

Ah, the power of collaboration!