A few days ago Charlie and I had a chat on Anthidium bees that he had found in his garden, and he was intrigued by their interesting behaviour which is characterized by the male occupying a territory and defending "his" flowers not only against conspecific males, but even against other, much larger insects by "ramming" in flight with full speed ahead and chasing them away in that manner. Charlie has posted pictures of the spines on the metasoma that are used in the ramming attack.

During our chat I mentioned to Charlie that one of our Old World Anthidium species, A. manicatum, shows up in our garden regularly in summer, and that I'd found this species also some years ago when living more southern, and back then had been able to photograph the copula. I remember this hot summer's day very well: I was jumping around in the meadow next to my parents' home trying to get a decent photo of a couple. These bees are d a m n fast, especially when it's hot and the sun is shining, they copulate only a few seconds and then take off to another flower. Back then I had a Minolta X-700 without motor drive or winder, so mostly one picture for one copula was possible, then I had to spot the next pair and position myself and the camera anew, focus and shoot... I remember being drenched in sweat, but as you can see, some photos I got were not too bad.

Apologize the quality, but the pictures you are seeing here, are just bad scans made from the original slides some years ago with my office scanner, however, they show what's going on. I hope to find time to digitalize these slides in better quality some day. But till then I thought I should post these, especially for Charlie, so that he can see I'm not making up stories.

Charlie, who meanwhile was able to observe the territorial behaviour and copula of the Anthidium in his garden too, told me that he found citations that the European A. manicatum was introduced to NA in the 1960ies and was recorded from Idaho and BC, Canada. I found a reference (JAYCOX 1967) which reports it from the State of New York.

As you might see, the male in this Anthidium species is bigger than the female, which is not often the case in bees. When looking closely in the pictures below, he seems to be nibbling on the base of her antenna while she is raising her front legs in what appears to be a "hurrah gesture".

(The photos are turned 180°, so actually the couple was hanging upside-down on these flowers of Ballota nigra) 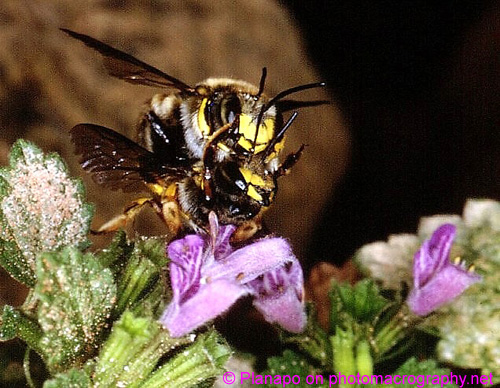 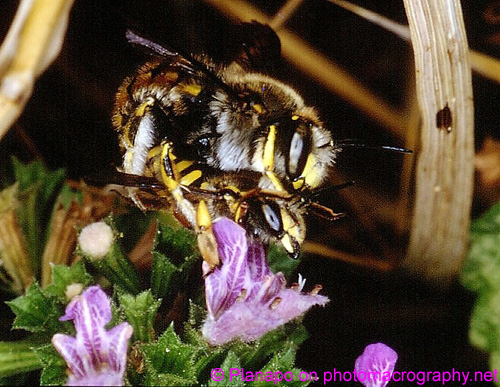 Thanks for the name of the plant, also.

Why is it, that in that first photo, I am reminded of the Lafayette Escadrille

Very nice photos, even for scans there Betty, though I know little to nothing about bees, other than the little boogers will sting you.

Do these bees tend to hover like hoverflies? I have actually seen a new bee around my flowers and it actually looks like this. At first I thought it was a hovering beefly until it landed on the flower.
Take Nothing but Pictures--Leave Nothing but Footprints.
Doug Breda
Top

Thanks for your comments, guys!

Yes Doug, these Anthidium bees are excellent flyers and can, like hoverflies, stand in the air by hovering, then quickly turn around on the spot while still standing in mid air, and speed off in any other direction.