I generally like to open with a landscape shot to give context to the flora and fauna, especially macro that I present. But on rare exception I'll post something that gives flavour to the Rainforest in a different way. Here I'll include an icon of the rainforest, captured by camera trapping in Cocha Cashu Biological Research Station. 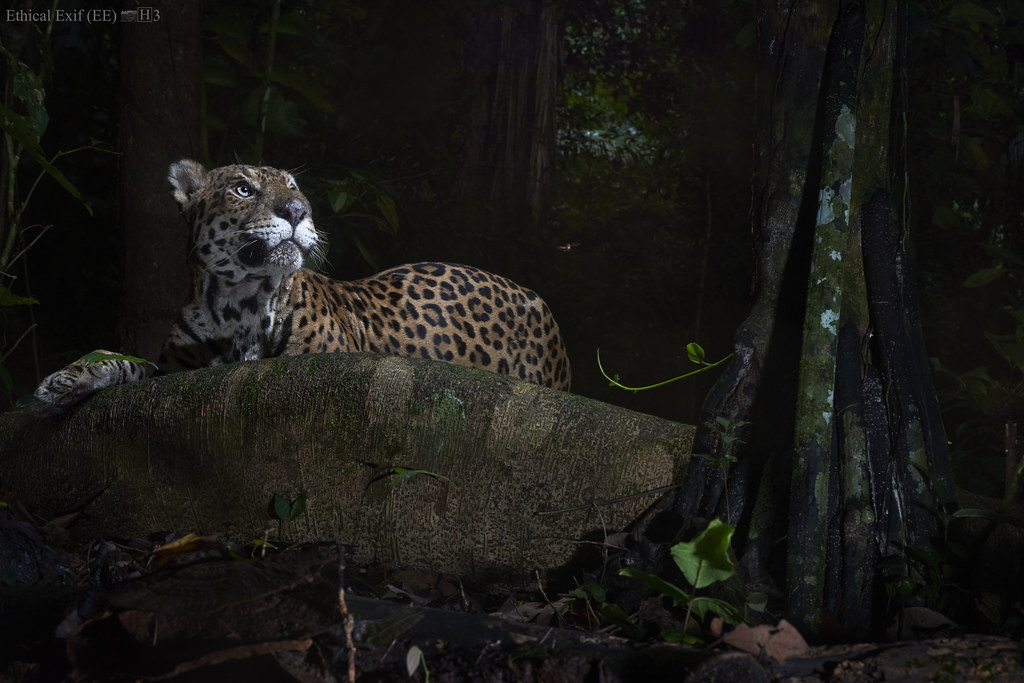 A pink-toed tarantula (Avicularia sp.) at full stretch. Notice the egg on the abdomen, likely placed there by a parasitic wasp, which may grow to ultimately feed on and kill its host. The tarantula at this stage remains blissfully unaware: 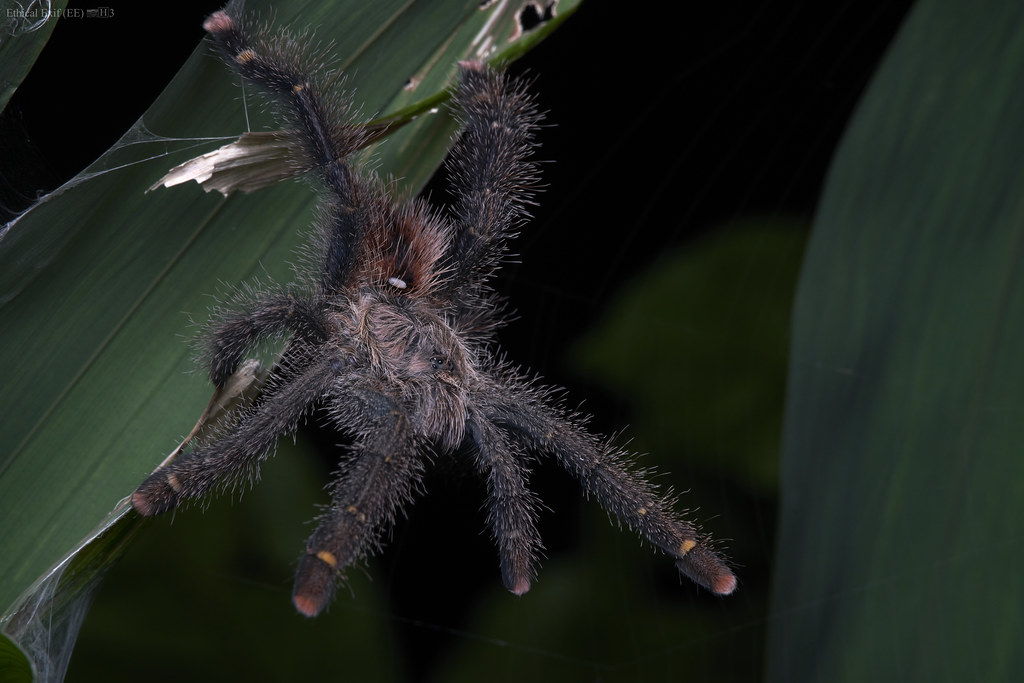 Though they may not have quite the same impact or appeal as the larger megafauna, ants indubitably dominate the rainforest. Here, crematogaster ants have pinned and subdued a wasp: 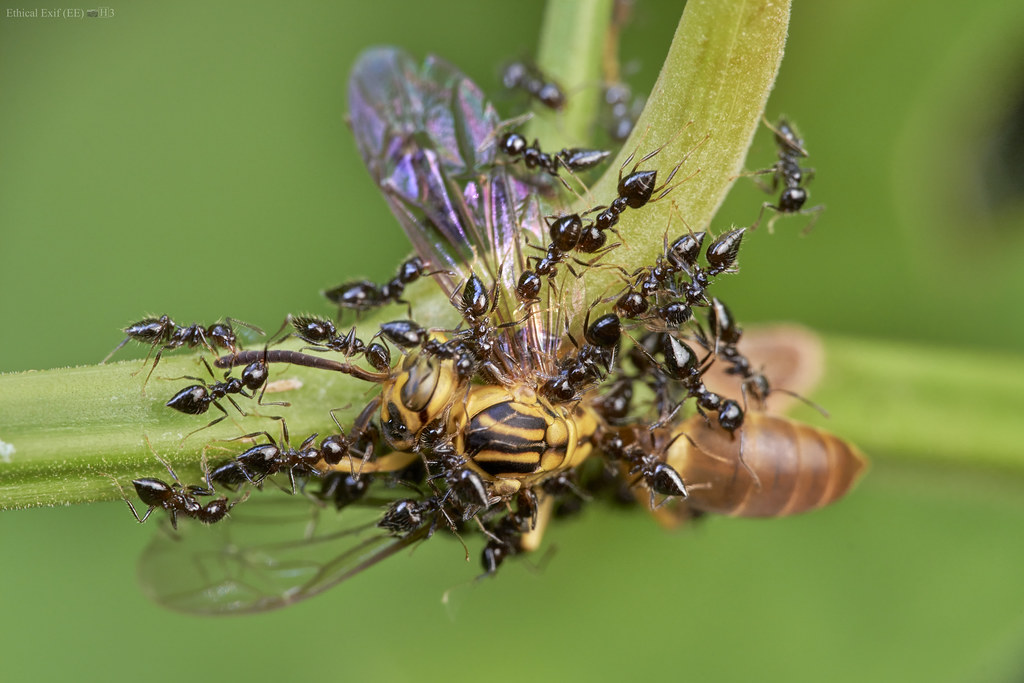 Others like this fingerprint ant (Ectatomma ruidum) have formed symbiotic relationships with other species. This ant is double-dipping, benefiting from both the extra-floral nectary, as well as the sugary exudates of the caterpillar, both of which it guards, much to the chagrin of the inga plant whose extra-floral nectaries were precisely designed as a form of currency exchange for protection. The caterpillar, a riodinid species, has subverted that relationship and enjoys the ants' protection whilst damaging the plant. 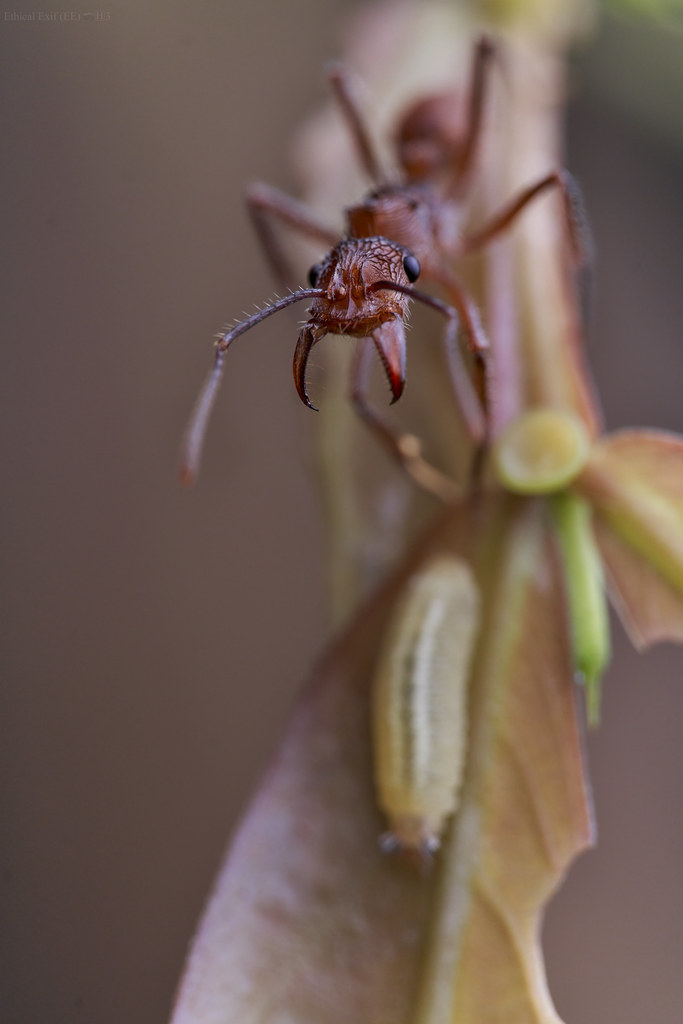 Other species, like these treehopper nymphs also offer sugar-rich honeydews in exchange for protection. The ants' mandibles can be seen full of honeydew: 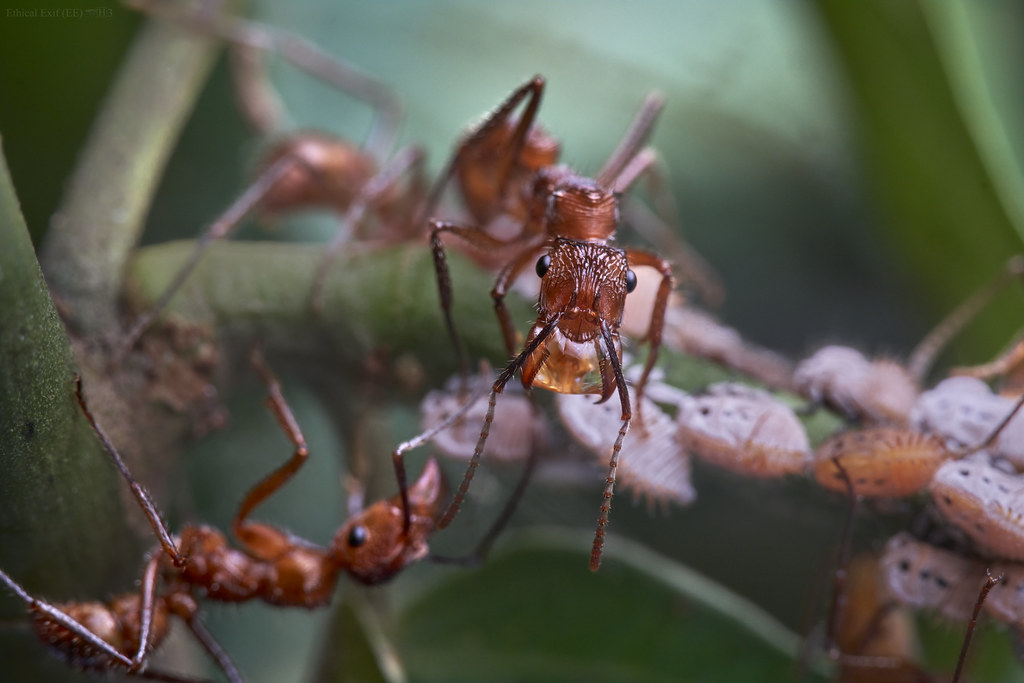 Individuals from different colonies are fiercely territorial, and these termite hunting ants (Neoponera sp.) which possess a potent sting will not abide any trespassers: 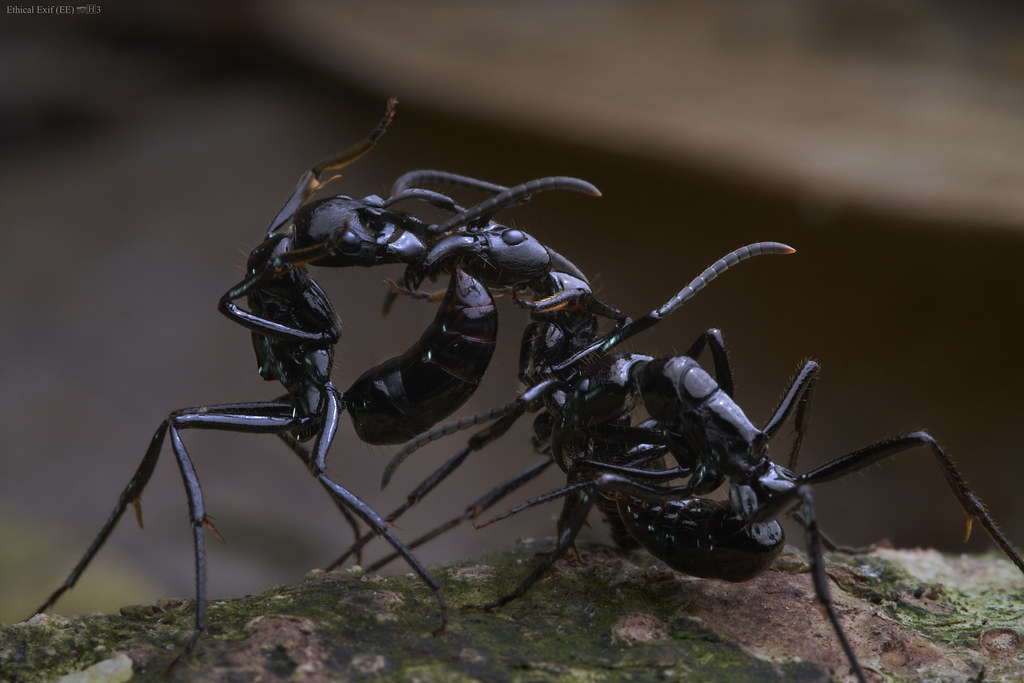 I only witnessed the aftermath of this confrontation, though the victor is clear. A crab spider (Epicadus heterogaster) was evidently surprised by a two-tailed spider (Hersiliidae) which has a unique web capture mechanism in that it quickly lassos its prey by literally running circles around it. The remnants of the web on the crab spider can clearly be seen, though the crab spider appears to have gotten in the fatal bite: 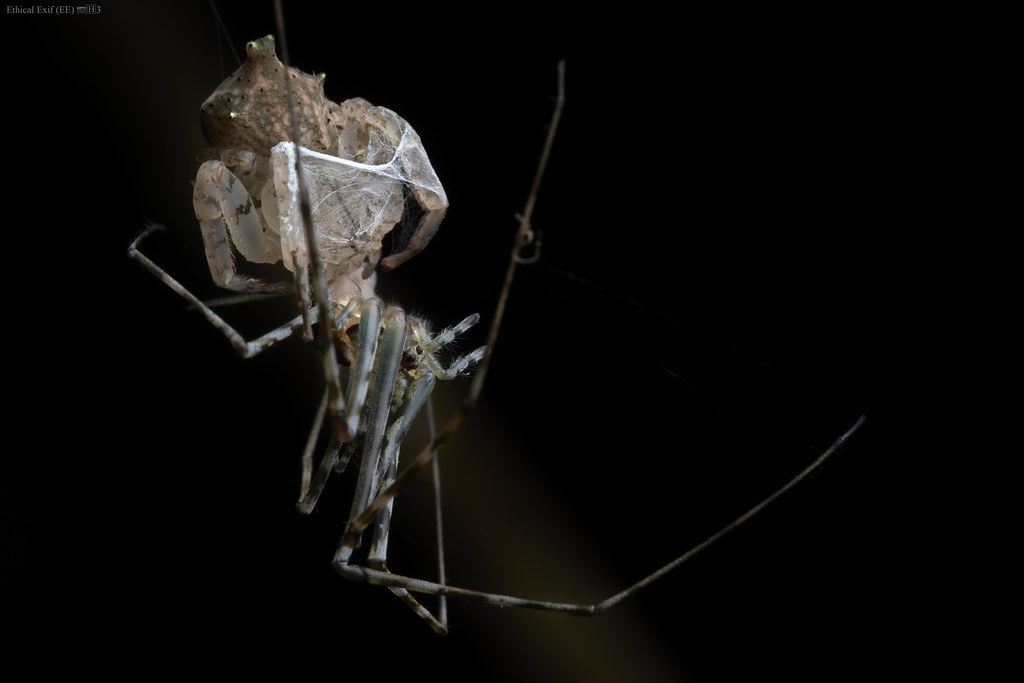 The rainy season provides an abundance of high volume, short-lived rainstorms which fill up temporary ponds and pools, briefly connecting ponds with streams, and rivers with lakes. This allows the free flow of organisms (and nutrients) from one environment to another which is simply not possible during the dry season. During this time, turtles can often be seen within these pools. The juvenile was briefly removed from the pond to photograph before being returned to the water: 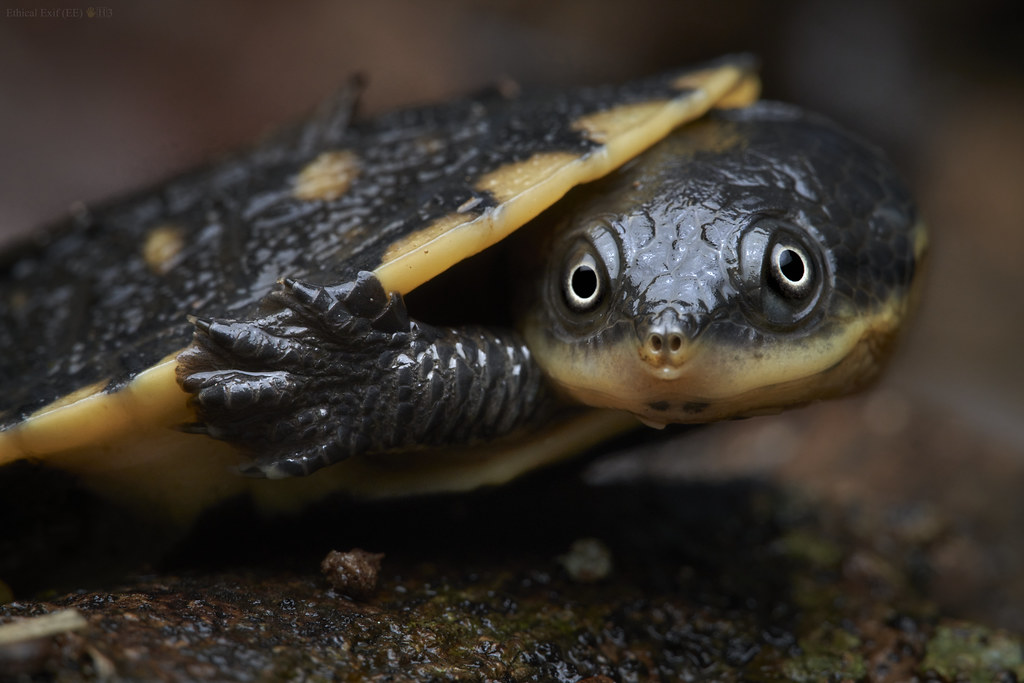 Your photos are always incredible, but that turtle came out so funny and expressive it looks like it should be a meme.
Last edited by Scarodactyl on Sat Jan 08, 2022 12:10 pm, edited 1 time in total.
Top