Every year, a couple of funnelweb spiders spin webs in the outside corners of the window by my computer, making their nests behind the shutters.

As far as I know, these spiders have always been female. This year is no exception.

But today, there was a male come visiting to one of the webs: 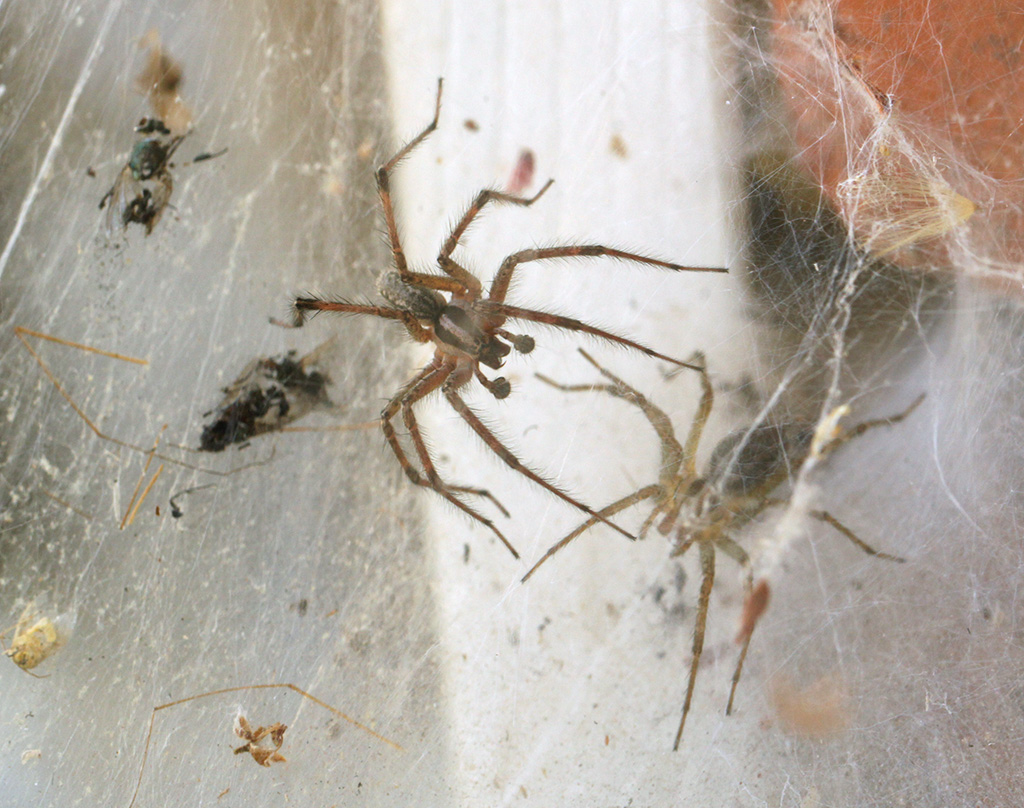 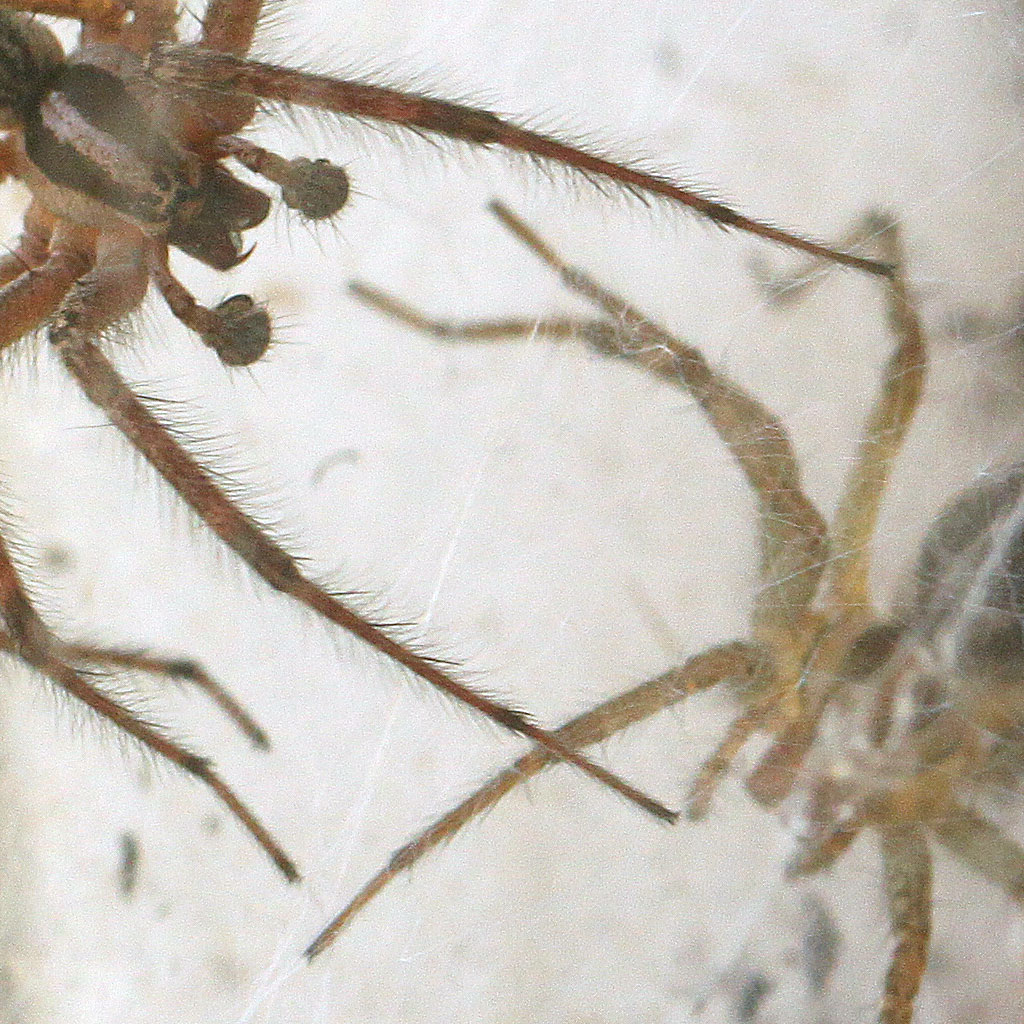 A short while later, the female had retreated into her funnel, and the male seemed to be intently eyeing the opening. 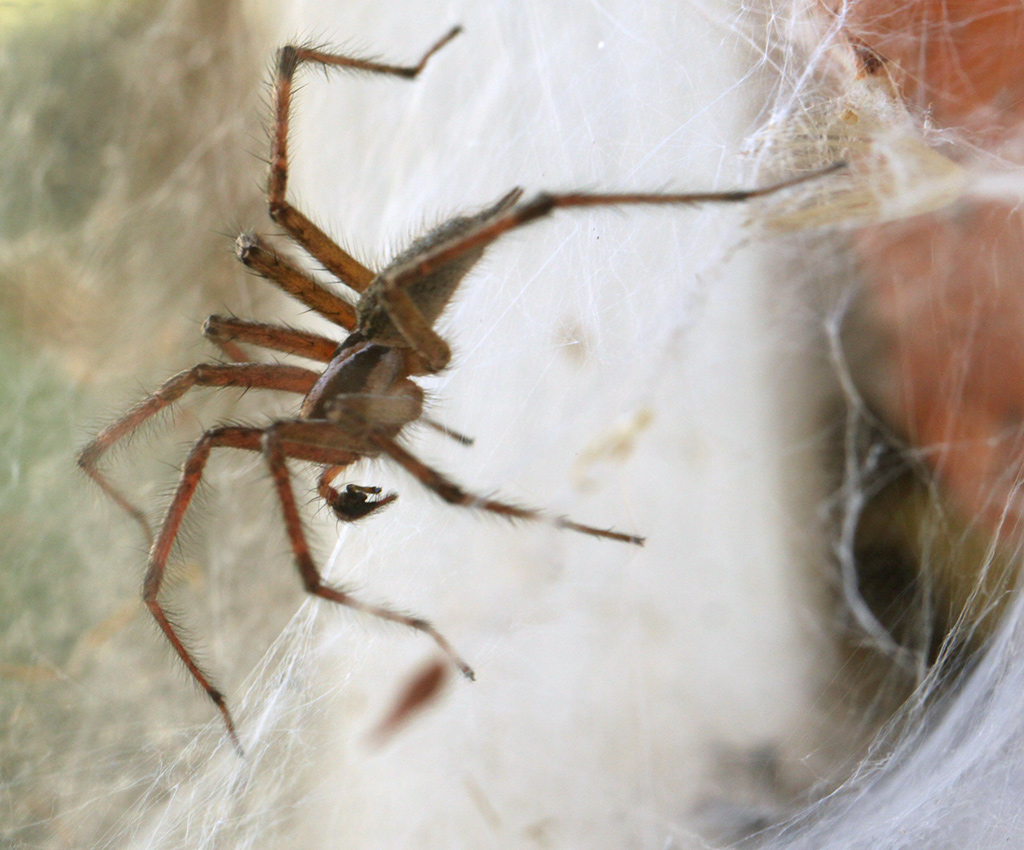 A closer crop, 100%, showing more of the pedipalp. 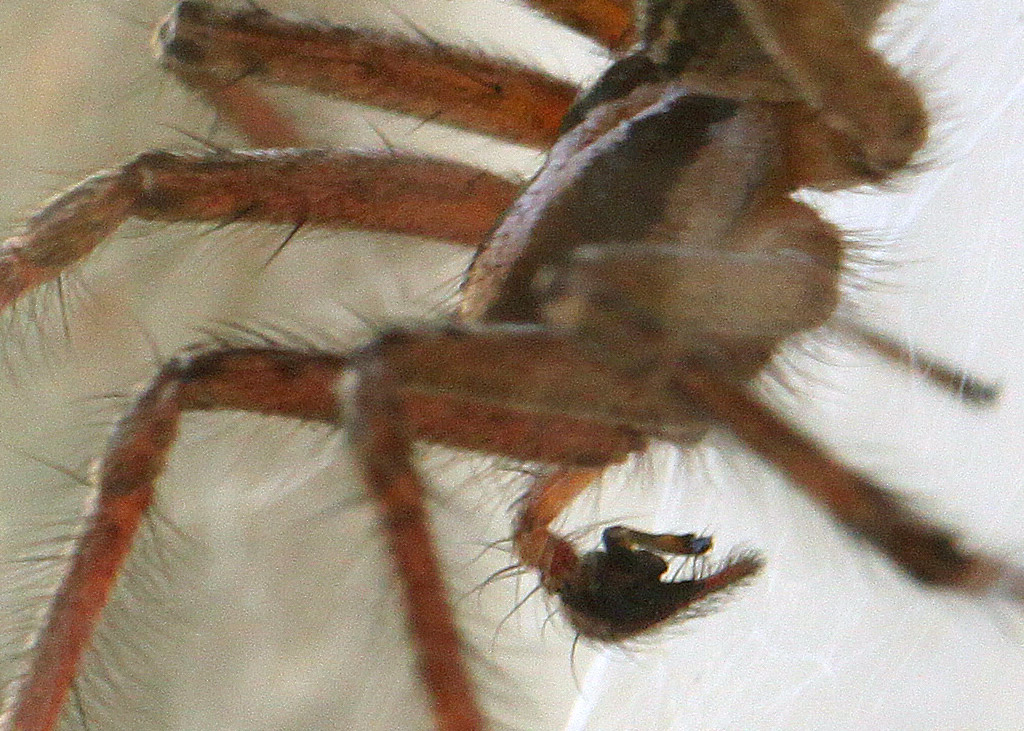 A few minutes after this, the male had apparently followed the female into the funnel, since only his hind legs and distinctive abdomen were still showing.

And a few minutes after that, there was no sign of either spider. I assume that both of them had moved behind the shutter, and were doing whatever spiders do behind closed doors.

Canon T1i camera with Canon 100 mm f/2.8L macro at f/9 at 1/40 second, ISO 400, handheld. Shot from indoors, looking through two panes of glass plus some amount of dirt and spiderweb. Levels adjusted to restore contrast.
Top

I wonder if he was being eaten behind those closed doors.....
Lou Jost
www.ecomingafoundation.wordpress.com
www.loujost.com
Top

It's possible. But according to "Biology of Spiders", Rainer F. Foelix, 2nd Edition page 199,

The supposed aggressiveness of the female spider toward the male is largely a myth. When a female is ready for mating, there is little danger for the male. If a male courts at the wrong time, however, he my well be attacked and eaten by the female. In some clubionid species, the female allows only one copulation and reacts aggressively toward any further advances of males. In general, most species separate quite peacefully after copulation. Only in some exceptional cases does the male fall victim to the female, for example, in certain Argiope and Cyrtophora species. The infamous black widow (Latrodectus mactans) does have a bad reputation, but -- quite contrary to popular belief -- the male usually withdraws unharmed.

In the current case I saw no sign of aggressive behavior, so I have hopes for a peaceful outcome.

Hope so...but why did the male disappear? If he had done his duty, wouldn't he just leave?
Lou Jost
www.ecomingafoundation.wordpress.com
www.loujost.com
Top

It looked to me that the male was headed through the funnel, to get into the nest, to finish the ritual there.

At this moment, waay back in the funnel, I can see a single set of legs. With a mirror and a light, I can also see what looks like the male's abdomen, still attached to the legs, which flinched a little bit when the light shined in especially brightly. I have no idea how long the ritual takes with these spiders. According to https://www.britannica.com/animal/spide ... life-cycle there is a broad range:

In male spiders the second pair of appendages (pedipalps) are each modified to form a complex structure for both holding sperm and serving as the copulatory organs. When the time for mating approaches, the male constructs a special web called the sperm web. The silk for it comes from two sources, the spinnerets at the end of the abdomen and the spigots of the epigastric silk glands located between the book lungs. A drop of fluid containing sperm is deposited onto the sperm web through an opening (gonopore) located on the underside of the abdomen. The male draws the sperm into his pedipalps in a process known as sperm induction. This may take anywhere from a few minutes to several hours. Sperm induction may occur before a male seeks a mate or after the mate has been located. If more than one mating occurs, the male must refill the pedipalps between copulations.

Male funnelweb spiders (Agelenopsis aperta) leave their webs in search of mates and are attracted by a female's pheromomes. Using an elaborate dance of abdomen-waving and web-vibrating, they manoeuvre themselves face-to-face with their mate.

"Suddenly the male will walk forward, and at the same time the female will collapse," says Fred Singer of Radford University in Virginia. Out cold, males take advantage of the senseless female for between several hours and a day. Although she may wake up occasionally, the female is simply re-sedated.

The sedative pheromone has probably evolved to defuse females' tendency to eat everything they encounter. Females benefit from this too, says Singer, "if she doesn't [pass] out, she isn't going to mate." Females may also judge whether males make good mates from the strength of their pheromones, he speculates.

Although males are susceptible to the knockout pheromone, they seem to resist it in the wild - perhaps because they fire it in one direction. But this can backfire in the act: "Occasionally she'll wake up and eat him."

An interesting sequence and dissertation. I am a bit boggled by the amount of spider anatomy and physiology that has been sussed out over the years, but I guess that would be true in many areas of scientific inquiry.

I happened to look out the window just now, and saw that the male spider had emerged from the funnel and was doing something with its pedipalps and legs.

This was definitely an improvised photo shoot, with my wife holding an LED flashlight while I tried to find a clear hole in the web to shoot through.

Here is the best I got. 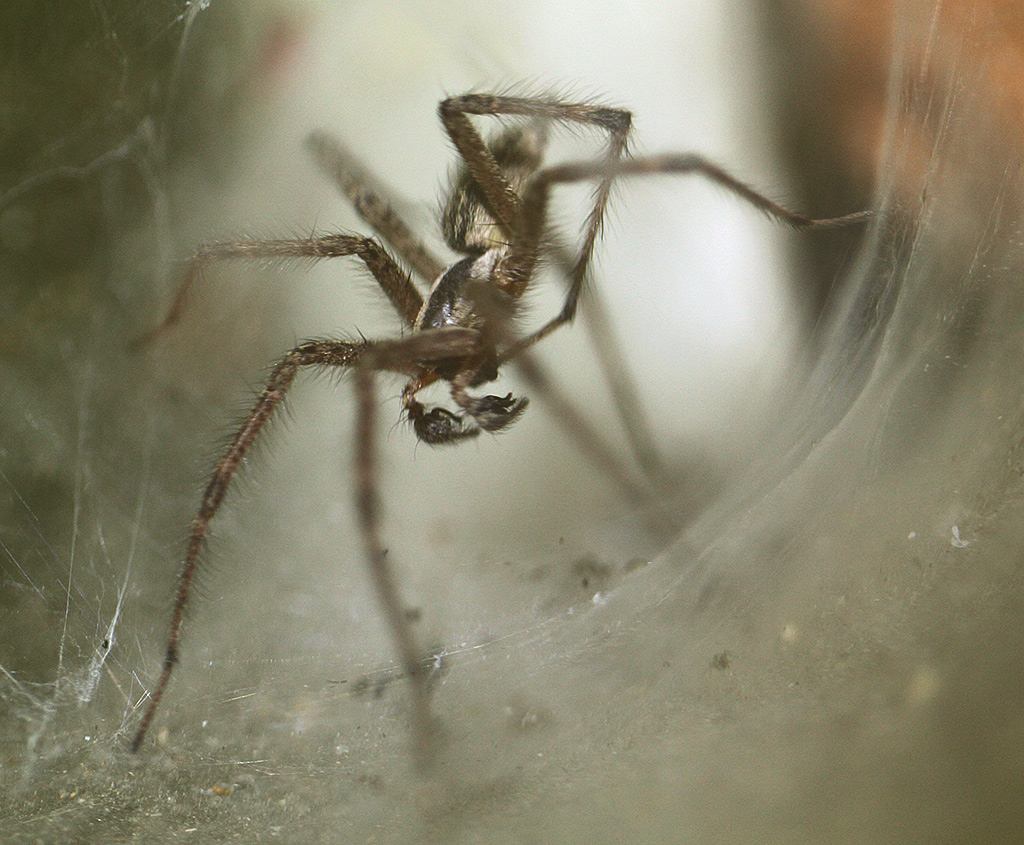 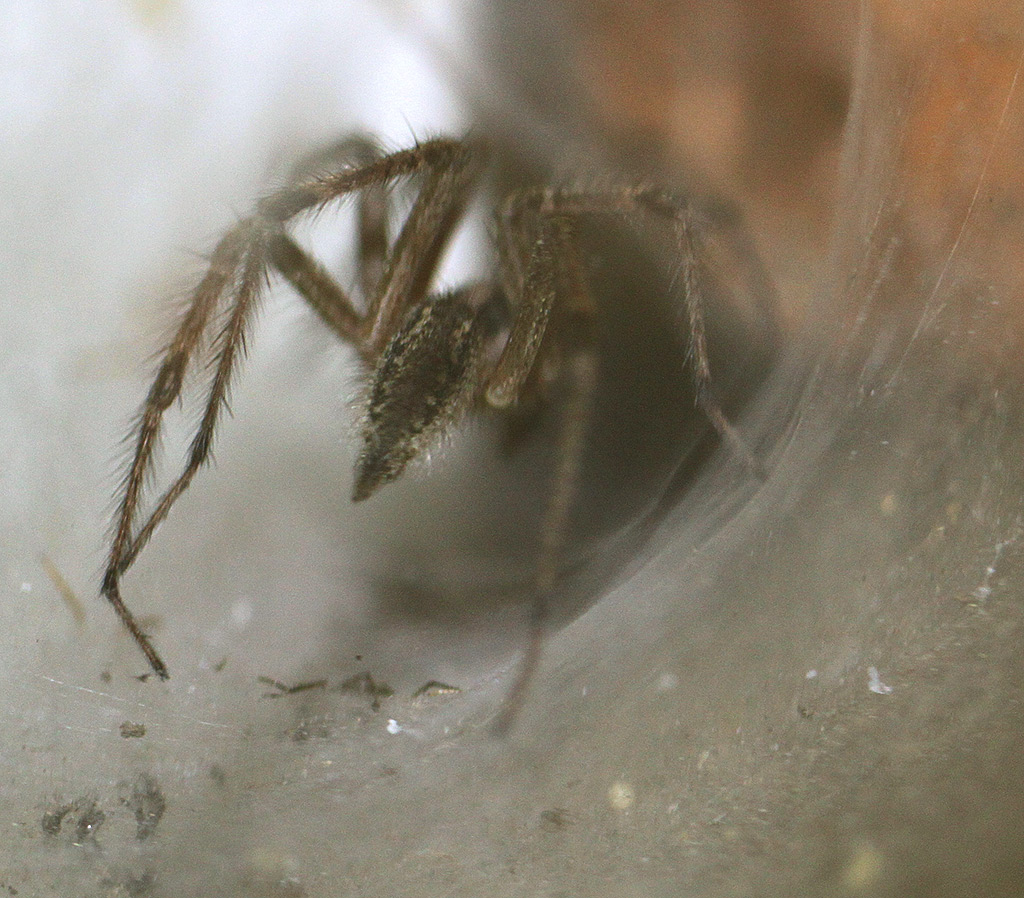 In the first one, I'm not completely sure, but it looks to me like one pedipalp has a drop of something on it. 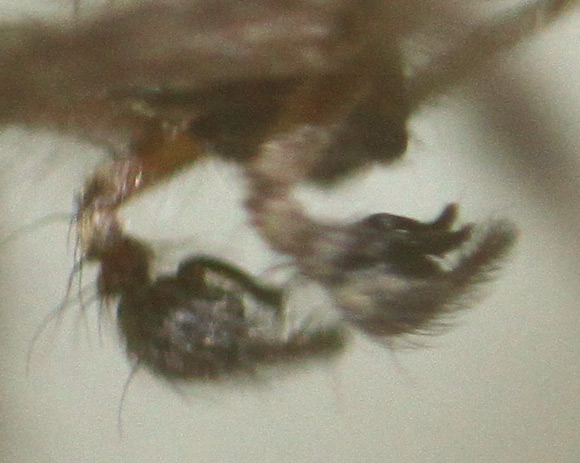 At this moment, as I post these photos about 20 minutes after shooting, the male has emerged again and is quietly standing face out, appearing to be "standing guard" at the entrance to the tunnel.

In any case, the fellow seems to have survived his experience just fine. 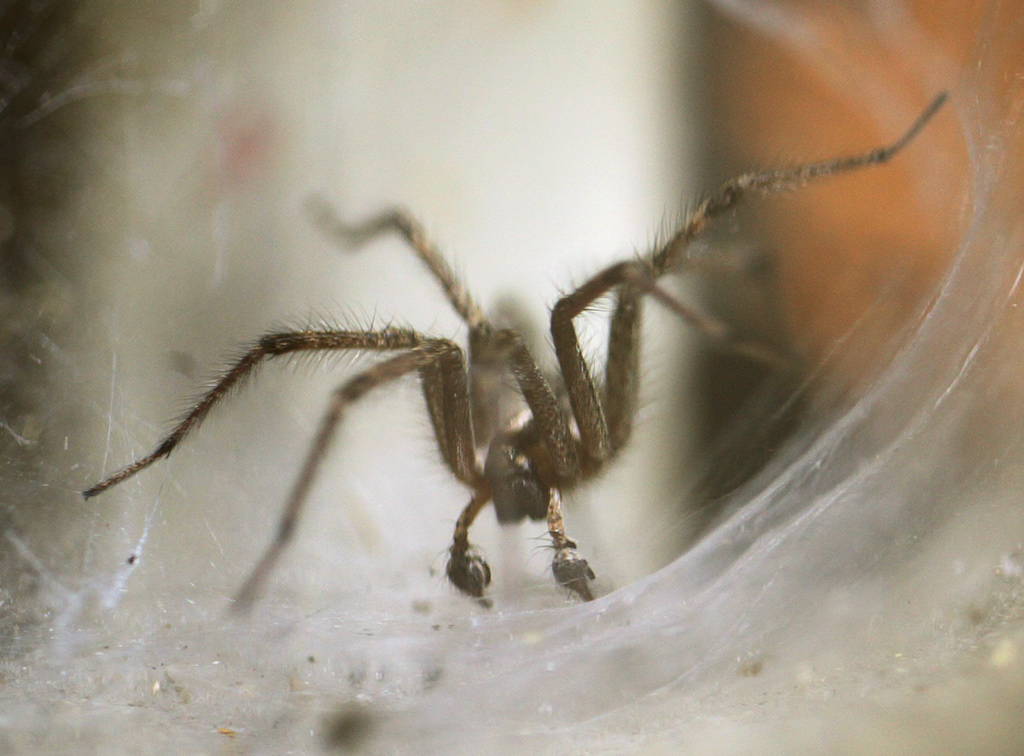 Nice to know he got out alive.
Lou Jost
www.ecomingafoundation.wordpress.com
www.loujost.com
Top

He's still there this morning, another 12 hours on.

Edit 1: Whoops -- disappeared while I was typing! I don't know where he went.

Edit 2: Looks like he just retreated back into the funnel. With a light I can see a pair of big pedipalps hanging back there.

Another 12 hours on, almost 2-1/2 days from the start of this affair, the male is back to standing guard just outside the funnel opening.

Very good documentation! I've seen males in female webs a few times, but that's all.
Very late last season I came across a female guarding her egg sac. Its the first time I've seen that. The egg sac was flat, and well pinned against the side of our barbecue. She stayed with it for I suppose a couple weeks without moving a millimeter.
Mark Sturtevant
Dept. of Still Waters
Top

It is now 3 days after my last report, and in all that time I have not seen either spider, despite checking every few hours. My guess is that the female is still behind the shutters, guarding her egg case, while the male has now secured his investment and taken off to perhaps find another opportunity. But I cannot figure out how to confirm either of those, since I have no access behind the shutter except to totally remove it. That would be a lot of trouble and likely would scare off whatever is behind it, so I think I'll let this one stop here.

Now two weeks after previously reported events, a large female is again occupying that same web. I have no way to know if it's the same female as before.

Now today, in the other corner of the window, the female on that side is gone from view and a large male is guarding that funnel entrance. The same male, perhaps, having found a new partner? 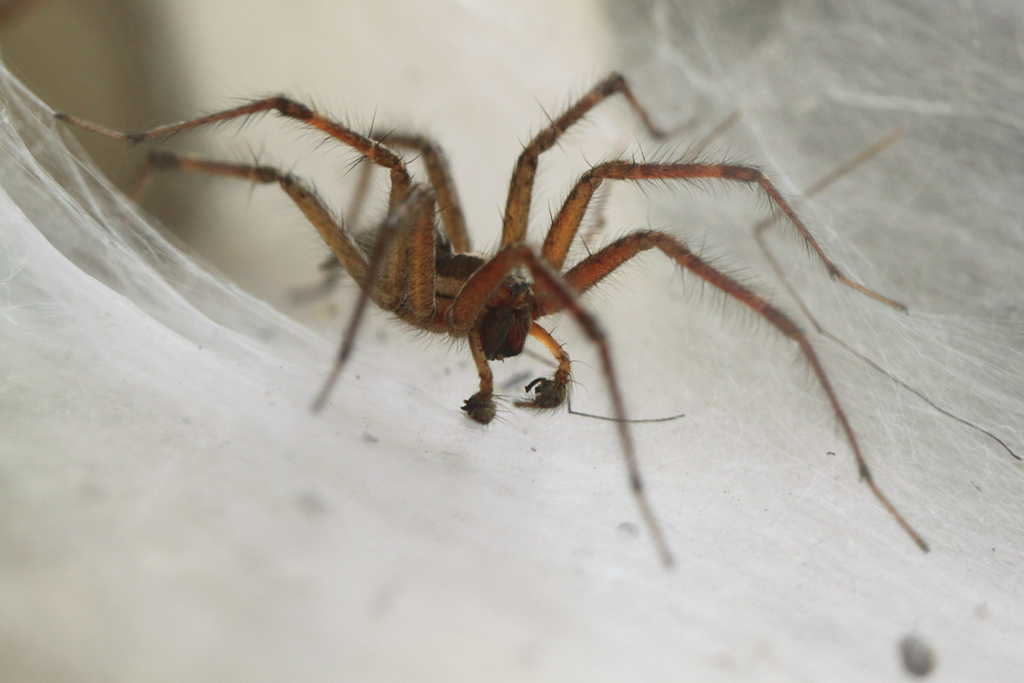 The male is quite aggressive at this moment. When I approached to take a picture through the glass, he charged the lens! I suppose that probably I touched the inner pane of the double-wall window, and some vibration penetrated to the web and alerted him. But still, through the viewfinder, it felt very direct and a little scary.

The picture shown above is after the charge, when he returned to the funnel entrance and resumed an alert stance.

Or maybe he was hunting? Here is the view a few minutes later: 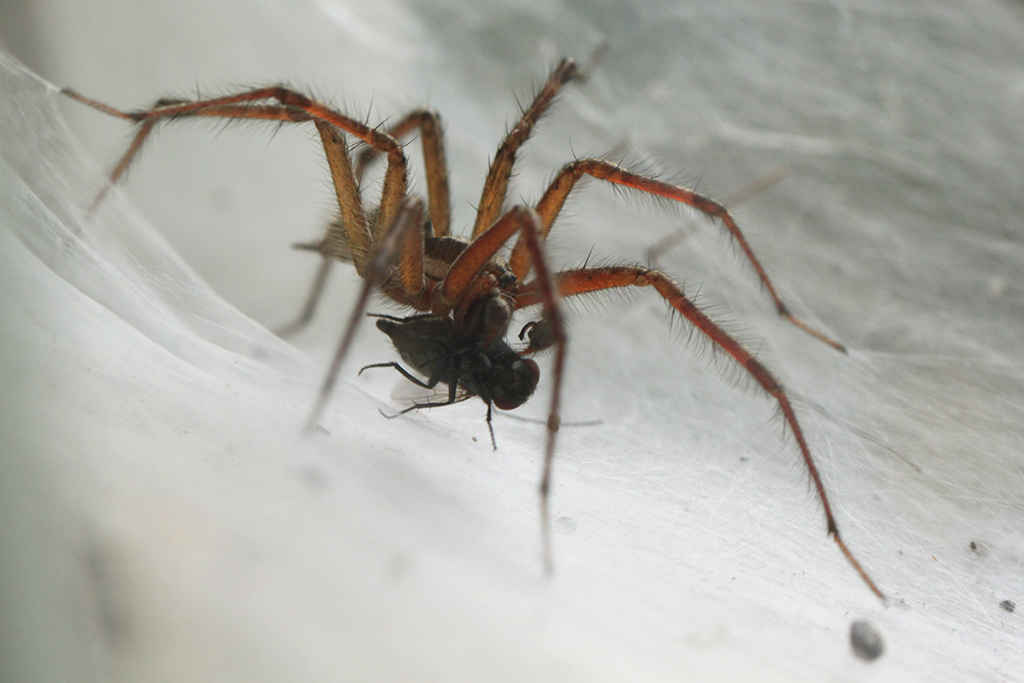 Meanwhile, on the first corner described earlier, a large female is back. 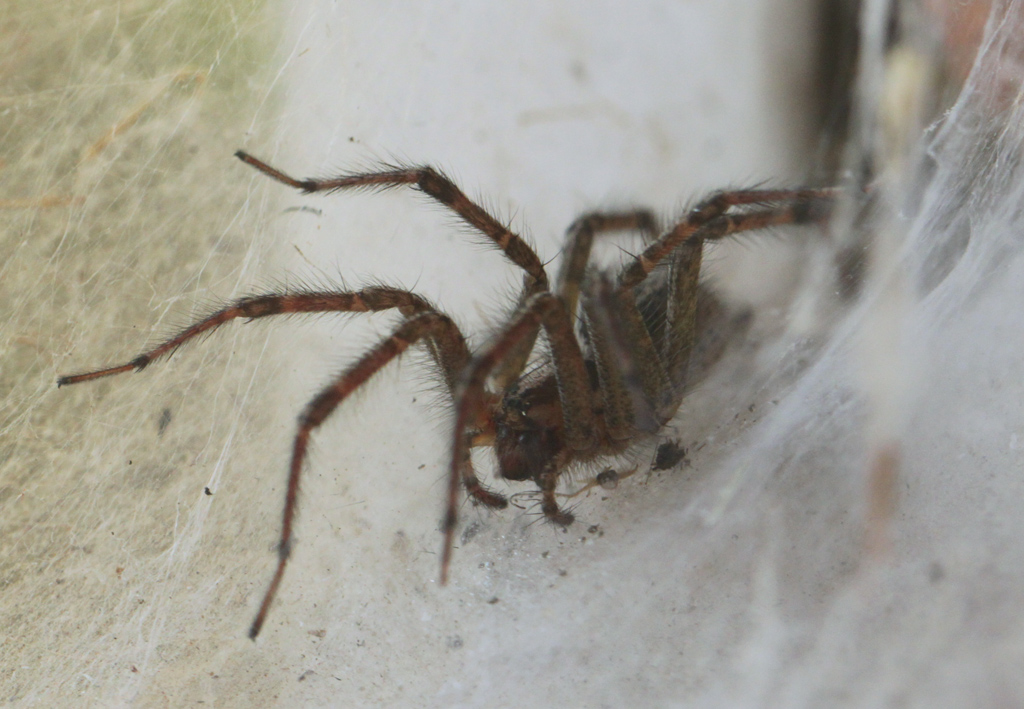