I have a collection of pictures that features various arthropods that are weird for one reason or another. Either they are unusual in appearance, or biology, or both. This will be fun!
To begin, here are some sawfly larvae in the genus Caliroa. I should explain that sawflies are actually wasps with vegetarian larvae, and the immature stages often look strikingly like caterpillars. But the larvae from this group barely look like insects. 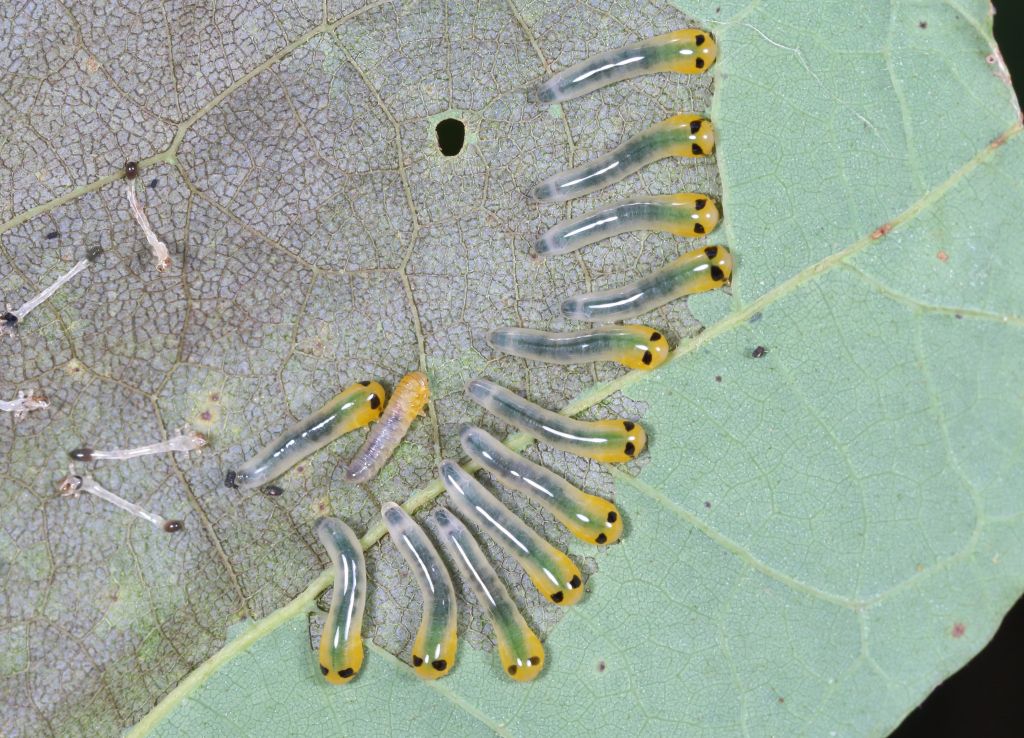 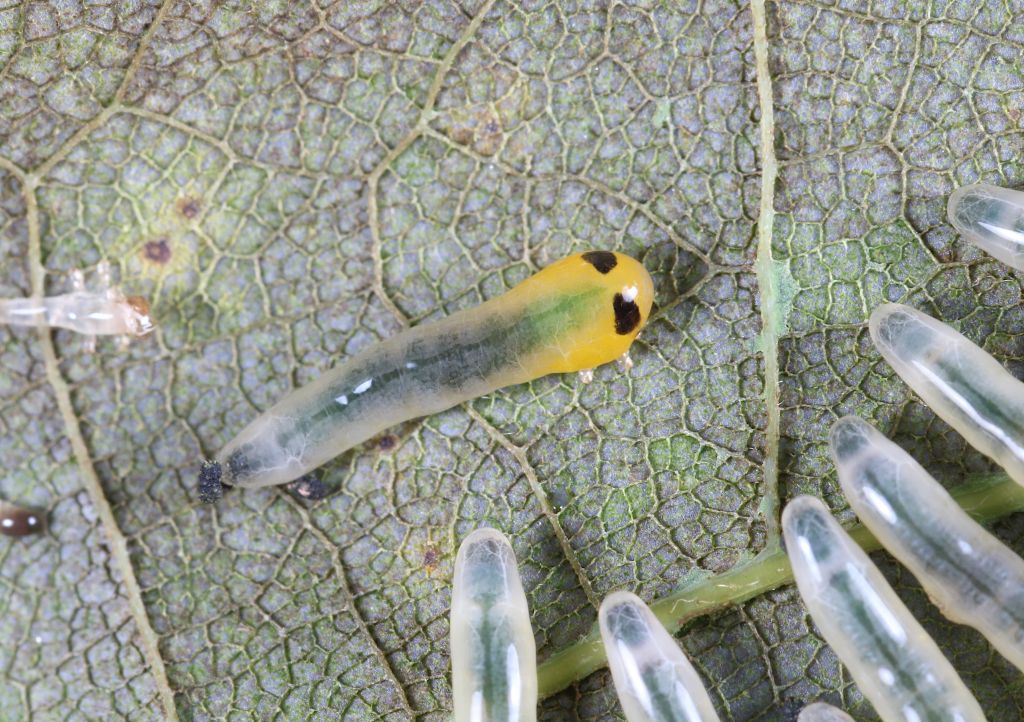 Next is one of my favorite weirdos, the wasp-mimicking mantidly Climaciella brunnea. This takes some explaining. Mantidflies belong to the insect order Neuroptera, and so are related to lacewings and antlions. They are predators, and so the similarity to a praying mantis is an example of convergent evolution. Their life cycle is also unusual in that they grow up as a parasite in the egg sacs of wandering spiders like wolf spiders or nursery web spiders. So while the large mama spider is guarding her brood, it is being consumed in the egg sac by the larva of one of these. Finally, this species is a mimic of various species of paper wasps. Its appearance is different in different parts of the U.S., to better match the local species of paper wasp that predominates there. 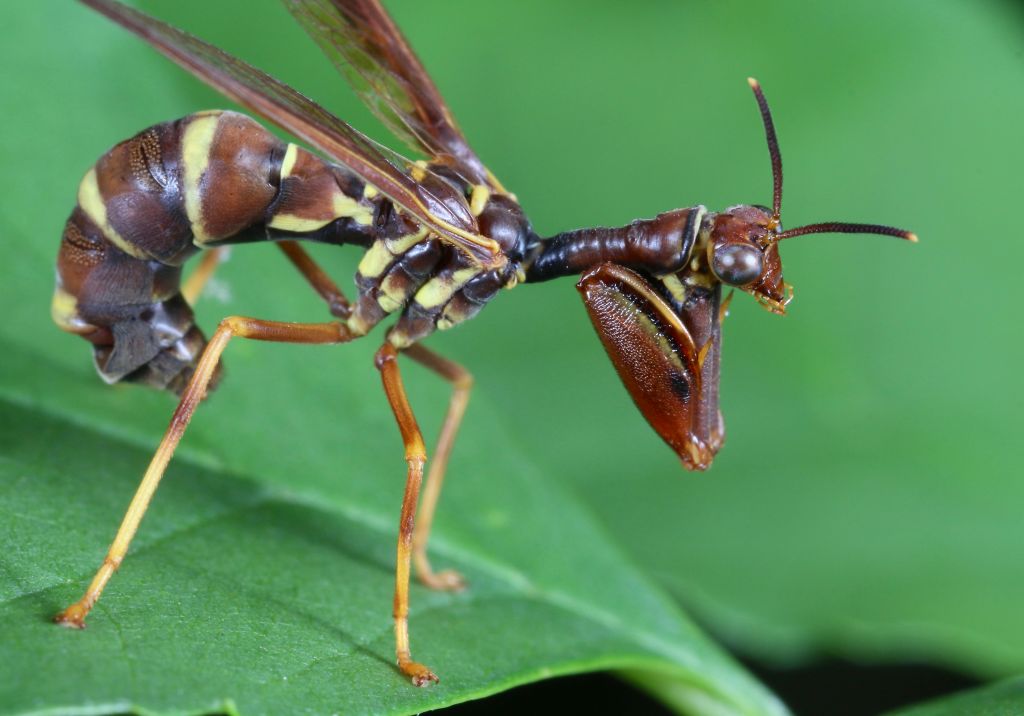 The insect shown in the next pictures is a Pelicinid wasp (Pelicinus polyturator. In my area they appear for a few weeks, and can be found flying silently through clearings in the woods. Here, Pelicinids are almost always female, and they reproduce by parthenogenesis. Farther south, male Pelicinids are more common, although I have never seen one. They are parasitic on June beetle larvae, and they use their extraordinary abdomen as a probe to lay eggs on their host in the soil. These pictures are actually staged shots of a wasp in front of a window. 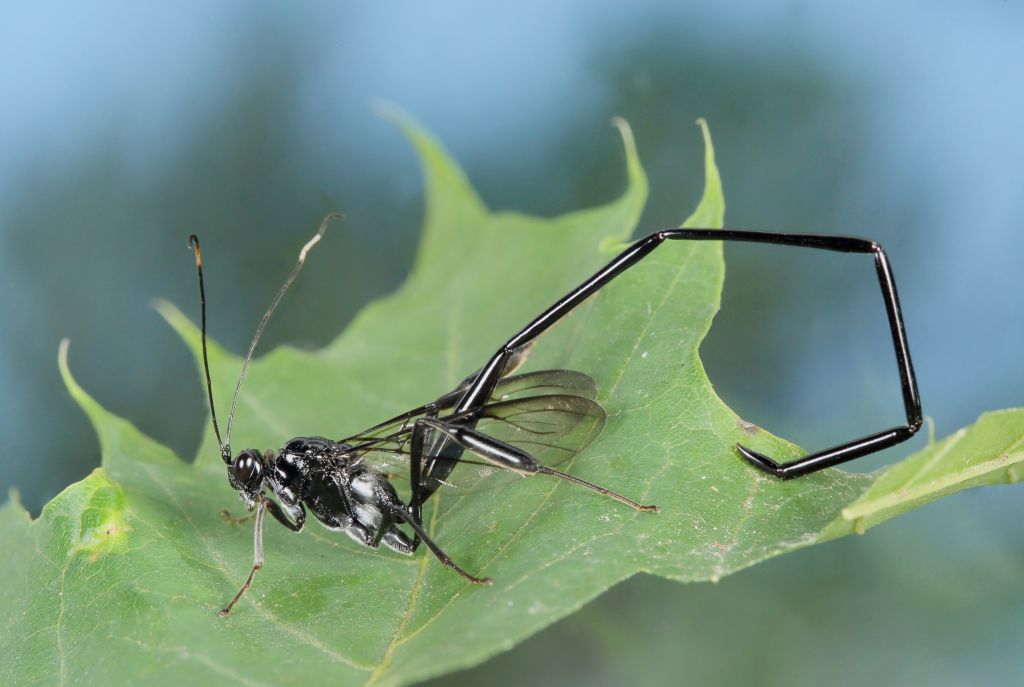 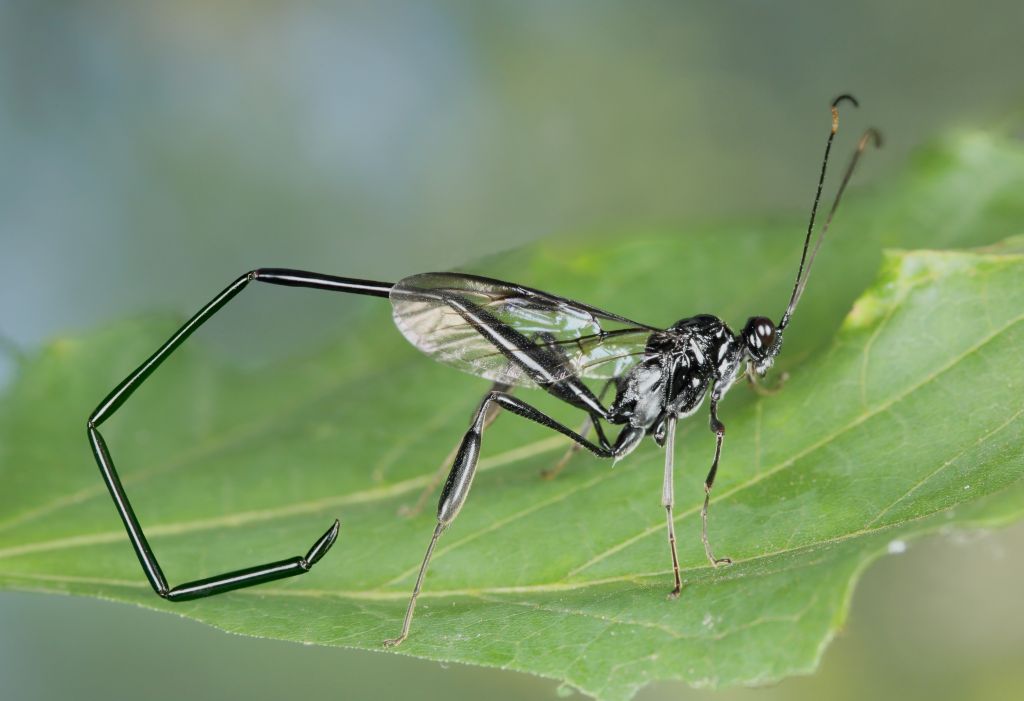 Next is a rather interesting caterpillar. This is the spiny oak slug caterpillar, Euclea delphinii. The bright colors and spines are a suggestion that they are not to be handled. 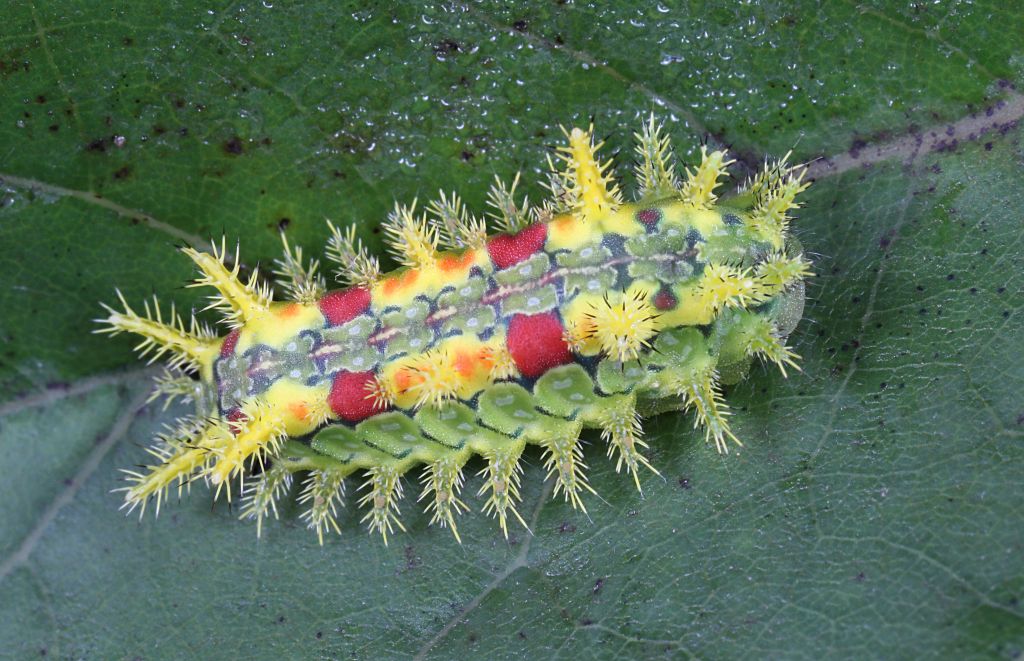 I remember when I first saw the species shown in the next picture. I was not sure what insect order I was looking at! This is a species of Derbid planthopper, Apache degeeri. What a strange little thing! Derbids can be found by walking along wooded trails and carefully peeking under tree leaves. Always a special find. This picture is a stack of two handheld pictures that I managed to get before it flew off. 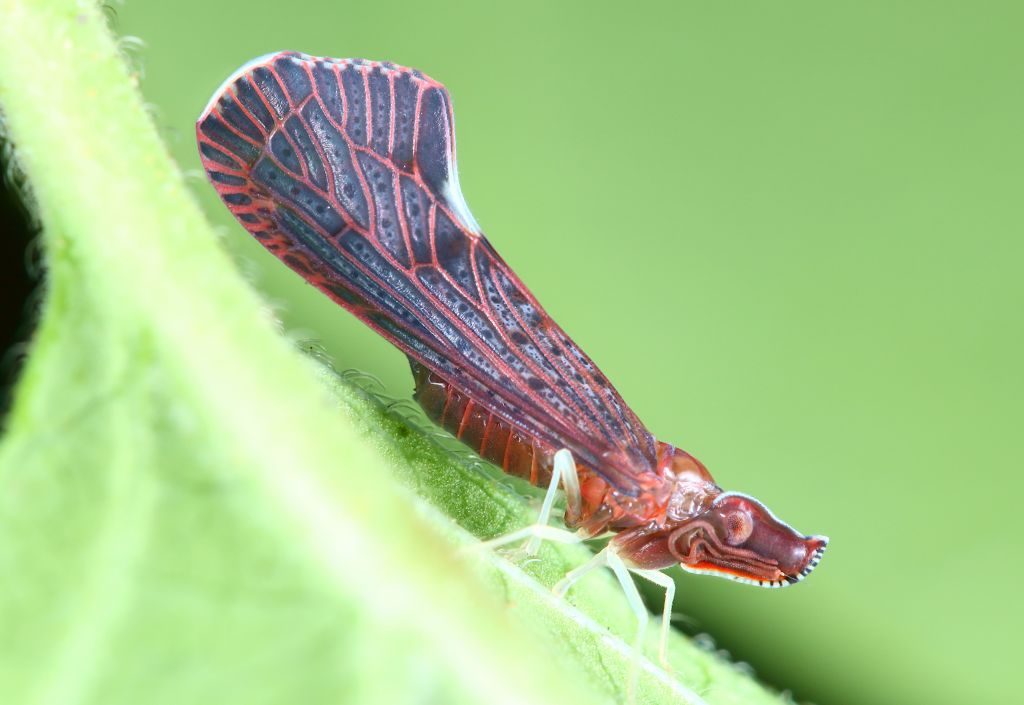 I will wrap up with a small spider. This does not look particularly unusual, but it does have an interesting biology. This is a bolas spider (Mastophora yeargani). They are in a family of orb weavers, but they build a very simple web consisting of a single strand of silk tipped with a ball of sticky glue. When an insect flies near, they fling the "bolas" at the insect, and reel it in. Many species, including this one, produce a chemical that resembles the pheromone of a particular species of female moth, and so most of their prey are males of that species. 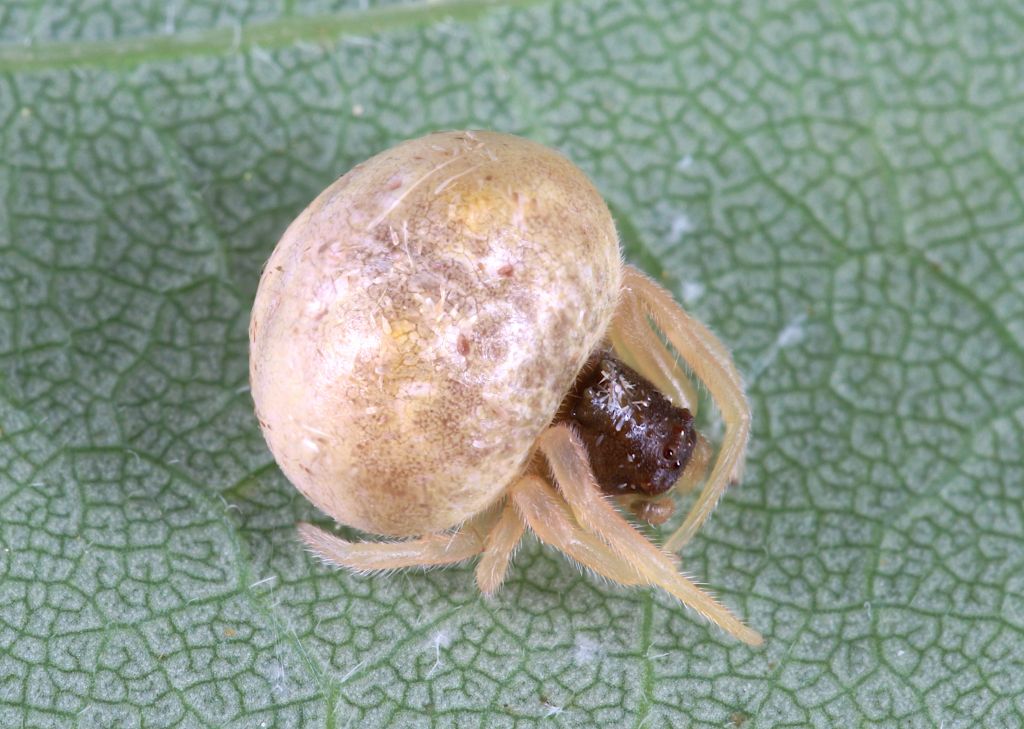 If you look carefully, you can see the spider has lots of moth scales on it. Pretty obvious why! For fun, here is a True Facts video that provides an amusing lesson about bolas spiders. https://www.youtube.com/watch?v=9qw3lkpa5lY
Mark Sturtevant
Dept. of Still Waters
Top

Weird indeed, but fascinating.
What makes photography such a strange invention is that its primary raw materials are light and time.
Top

Really interesting set and thanks for the explanation!
My Gallery
My Blog
Macro Tutorials
Top

tw
Since I have retired and I've rekindled a love for photography. I don't take myself serious but I do take creating interesting and well executed images seriously.
Top

Very nice pics. Made better by the commentary about the different species
Top

A strong group of some very peculiar customers. My favorite is the Apache; there is a critter with attitude!
Top

Thoroughly enjoyed the video along with the explanation of the spiders capabilities. I do so enjoy a good bedtime story.

Who weirder?........the subjects or the one shoving a camera in their face??

tw
Since I have retired and I've rekindled a love for photography. I don't take myself serious but I do take creating interesting and well executed images seriously.
Top

Fascinating and amazing set! The way the sawfly larvae consume just the outer layer of the leaf is pretty cool
Top