With several Panasonic and other cameras now available with the capacity to shoot and merge image (focal plane) stacks in the camera, not via post-processing, what is the potential for this hardware development? Is it a significant development for macrophotography . . . or not?
Eric LaGasa
Tenino, Washington
Top

I have a Panasonic DC-ZS70 that I purchased primarily for high speed video. It it has a focus stacking mode but I can't say I am very happy with the ease of use. I love the camera for travel (reasonably compact, great color, excellent zoom) and bug video.

There are some you-tube video showing stacking with this camera. Mostly this is promotional stuff, so keep that in mind if you watch them.

A serious stacker would probably be disappointed, but perhaps others may be more adept at using the stacking mode and the consumer market may eventually evolve toward improved ease of use.

This is the subject (Tulip Stamen) 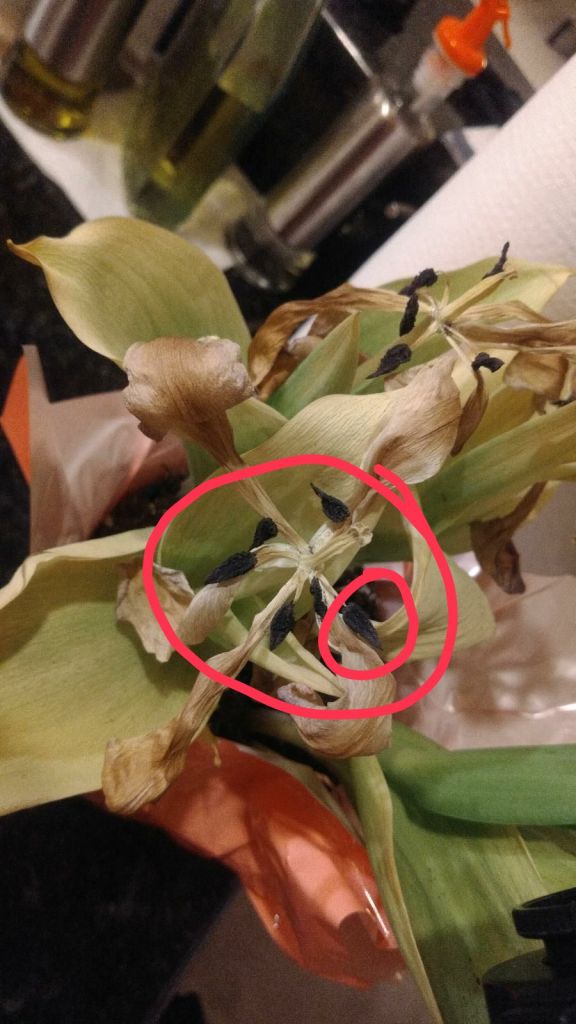 and this is the result ( 30 shots edited in DXO PL and stacked in Affinity Photo): 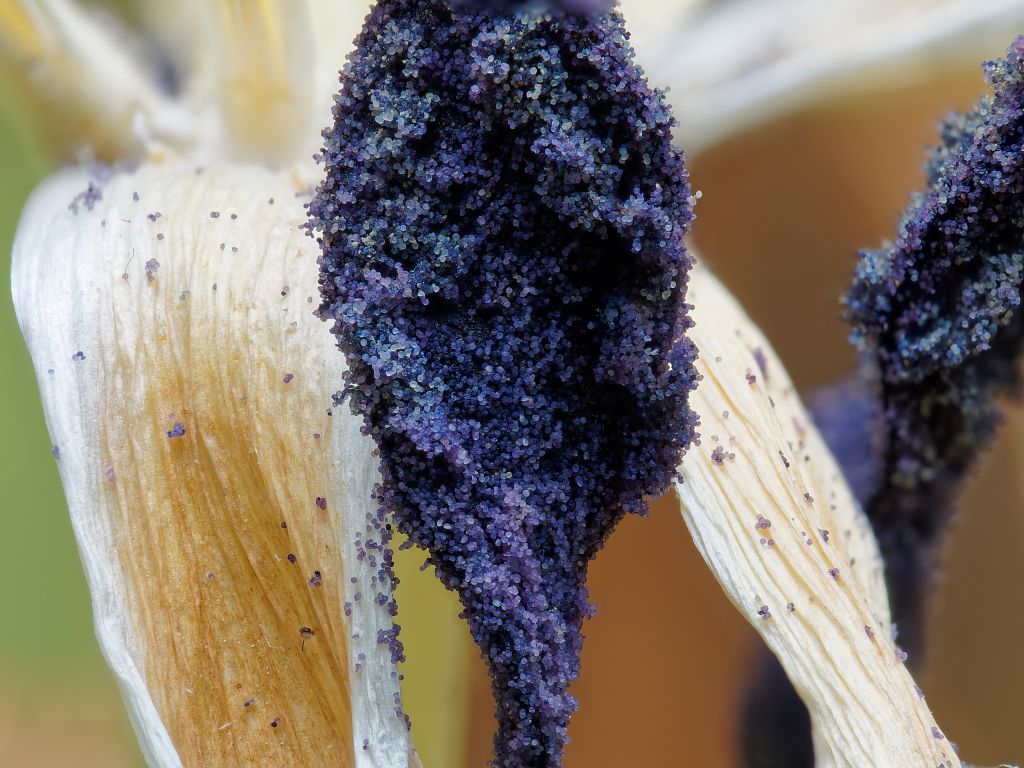 but I tried to get more magnification, so I attached 75-300mm ii with Raynox 250
It wasn't easy, and it is very hard to control the focus limit.
I need to try it more before saying it is unusable with higher magnification.

Focus bracketing in the Olympus cameras is wonderful at magnifications lower than about 1.5x. It is nearly instant and very easy, and it can be done handheld with care. There are fewer stacking artifacts than stacking by rail, because the perspective hardly changes during the stack. It also works fine with a low-mag microscope objective mounted on the lens.

With this feature I can collect a 200-image stack in a minute or two.Great for field work.

Beyond 1.5x there is not enough focus travel on a normal lens to make a deep stack. With a macro lens one can do deeper stacks in camera.

Focus bracketing in camera just gathers the pictures, it doesn't stack them. That's a different feature, and one I would not trust.
Lou Jost
www.ecomingafoundation.wordpress.com
www.loujost.com
Top

I think one is as well off with a camera which has a very high frame rate , then "rock slowly" to get a set of images to pick from. Some phones

After months of little development on this topic I came across this interesting news item from Canon:
http://www.canonrumors.com/patent-in-ca ... ilization/
Not long on details, but read the comments as well.
Another potantailly significant development perhaps - a PATENT game changer?
Eric LaGasa
Tenino, Washington
Top

Olympus Pen-F with VARIO G-X 45-175mm as tube lens is a pretty combo to work with. Tested fine with Mitys until 50x.
Regards

The way I see it is that a stacked image is an interpretation of a series of photographs of a scene, not the scene itself. While one can use various algorithms to choose the sharpest parts of the scene, each method can introduce it's own kind of unwanted stacking artifact. These can often be edited out quite easily by a person,but are apparently not so easily interpreted correctly by a computer program.

I have an Olympus OMD EM1 which has an in camera stacking function. While the out of camera stack generally has fewer problems than for instance an unedited D-map of Zerene, it also does not seem to retain all of the detail that was available in the original photographs. In addition fewer artifacts does not mean no artifacts, and there is no way I know of to edit the Olympus stack. While I was originally quite excited about this feature I don't use it any more because almost every picture has a small disappointment somewhere in it if you look for it.

The focus bracketing function is much more useful especially if you are using a tripod. The snag if you are trying to photograph something that could fly away at any moment, is that you need to enter the number of shots as well as how closely they are spaced quite deep in one of the menus. How on earth would you know either of those things before you see the next thing you want to photograph? Hopefully eventually they will bring out a function where you somehow mark the nearest and farthest points you want in focus and the camera decides how many pictures to take based on the other settings of your camera.

I think Chris R has a point about using burst mode and rocking back slowly. It has the disadvantage that one tends to spiral out rather than move in a straight line, so one can easily cut off a wing tip or foot. One must not frame too closely and you can also get focus banding if you move too fast. The advantage is that if you can learn to move precisely you can watch the evf to see that you have covered both the near and far points you want in your picture. I have ruined quite a few pictures in the focus bracketing mode by choosing too few shots, but also been frustrated by having to sort through too many.

Zerene is very good at aligning poorly aligned pictures, but if the insect twists even slightly, the stack will probably be ruined.
Top


The snag if you are trying to photograph something that could fly away at any moment, is that you need to enter the number of shots as well as how closely they are spaced quite deep in one of the menus. How on earth would you know either of those things before you see the next thing you want to photograph?

No, just use step size =1 and 999 images. Stop the capture when the LCD or viewfinder shows the image has passed your chosen endpoint. There is no need to go into the menu, no need for any of the complexity that you describe. It works beautifully.
Lou Jost
www.ecomingafoundation.wordpress.com
www.loujost.com
Top

Thanks Lou. When I just got the EM1 I nearly filled the card with a bit of stuff I wanted and a lot I didn't. My plan to fix that problem seems to have been limiting the usefulness of some of the features of this camera that I had wanted so badly in the first place.Just for those reading this thread who are unfamiliar with Olympus focus bracketing, you can stop the camera from taking any more pictures in the stack by pressing the shutter button a second time.

Anyway inspired by this thread I decided to take some comparative pictures of Olympus in camera generated stacks vs focus bracketed on the settings Lou recommended and stacked in Zerene. Olympus in camera stack at the top and Zerene generated image below. 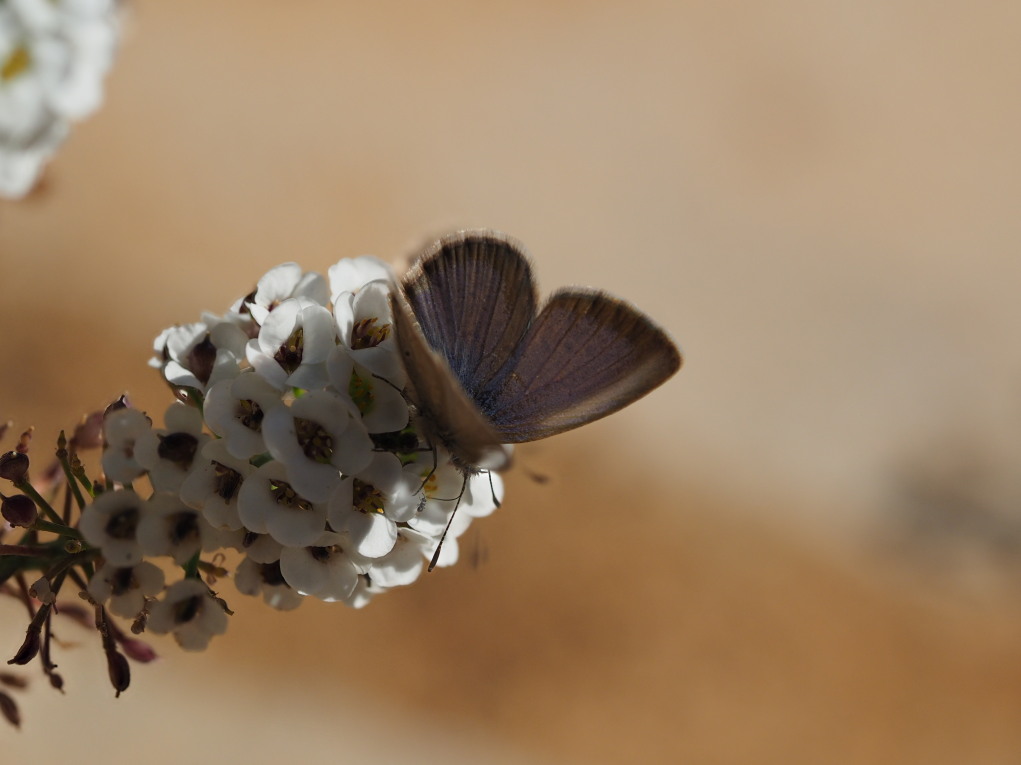 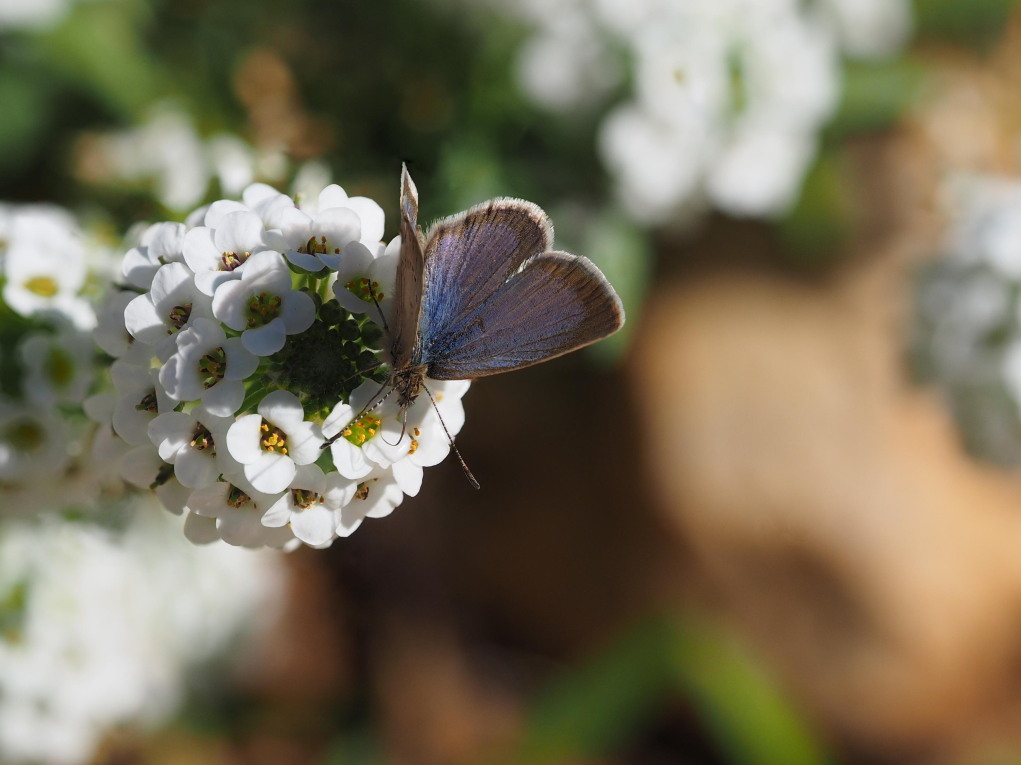 This result doesn't surprise me. I have tried to make the focus stacking feature work for butterflies and usually been under-whelmed by the results. On the other hand the focus bracketed stack seems much more even to me than most of the freehand stacks I have done in burst mode. I don't see much out of focus banding.

Next some red hot poker flowers in camera on the left and bracketed on the right.
[Admin edit to fit screen, above / below] 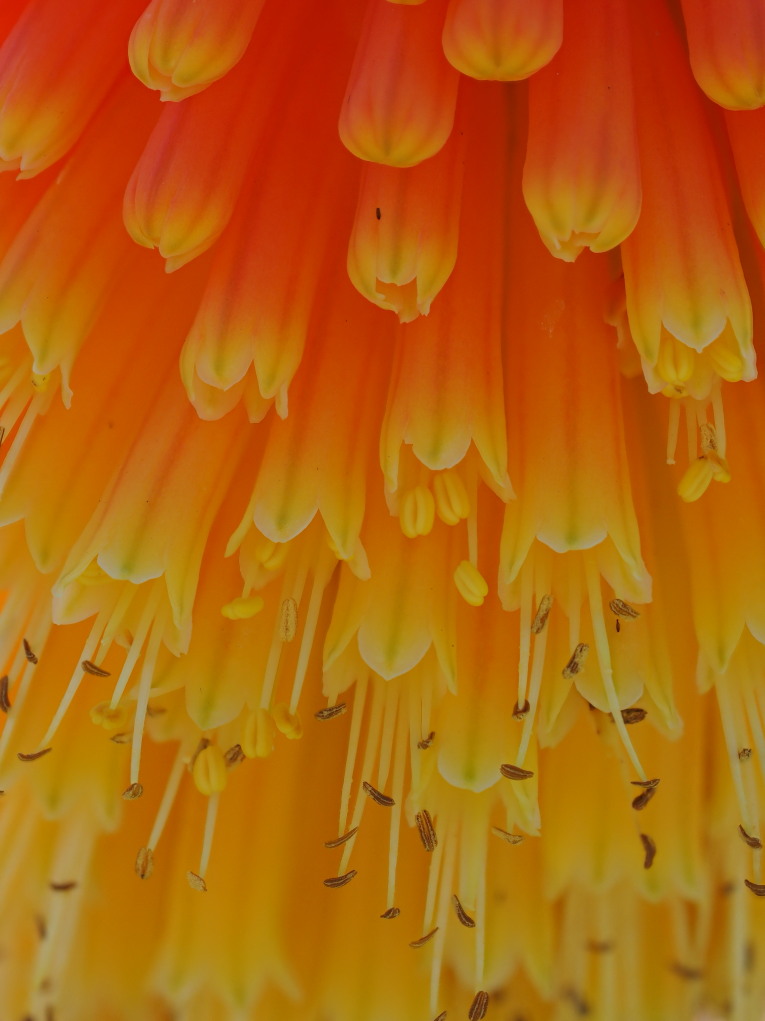 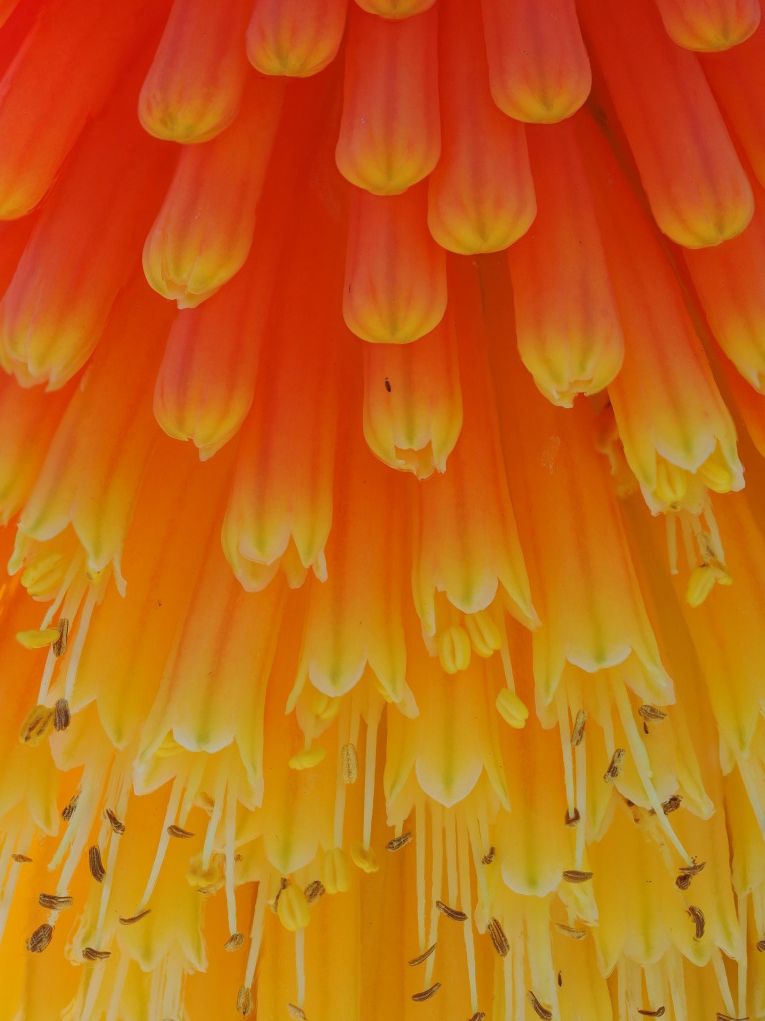 This result surprised me. I think the out of camera stack is better than the bracket. In fairness the bracket has many more pictures stacked and there was a bit of a breeze, but credit where it is due, the in camera stack is pretty good.

Finally a small cocoon with a silken net, presumably to keep out unwanted guests. If anyone out there recognizes what kind of creature made this please tell. 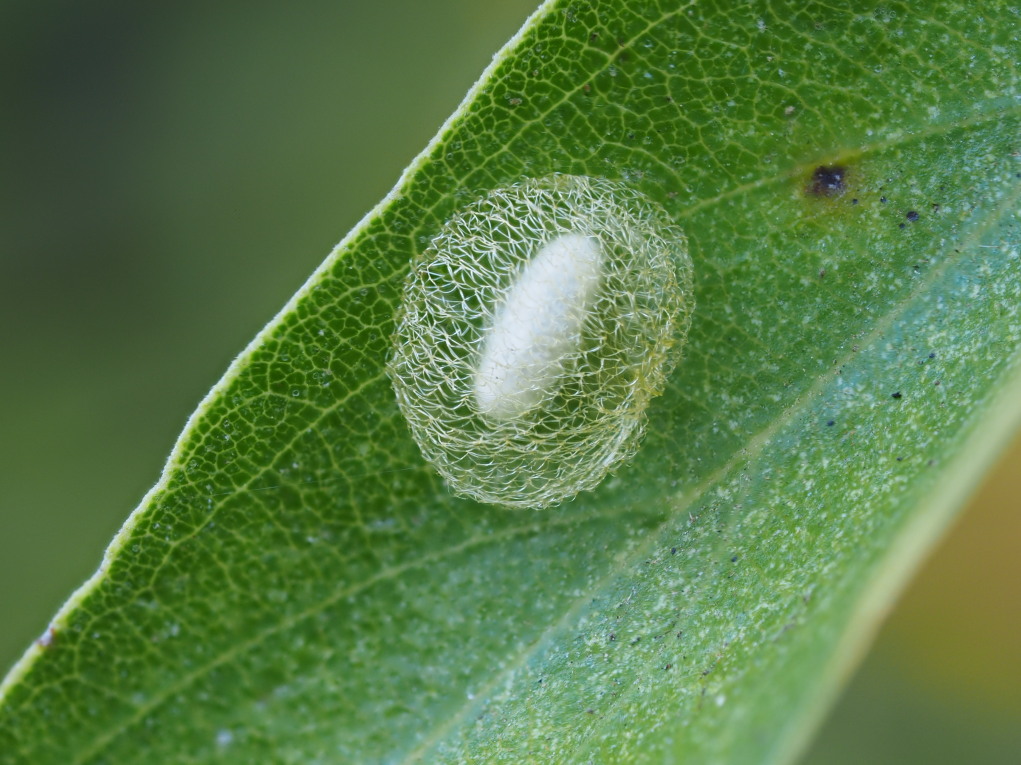 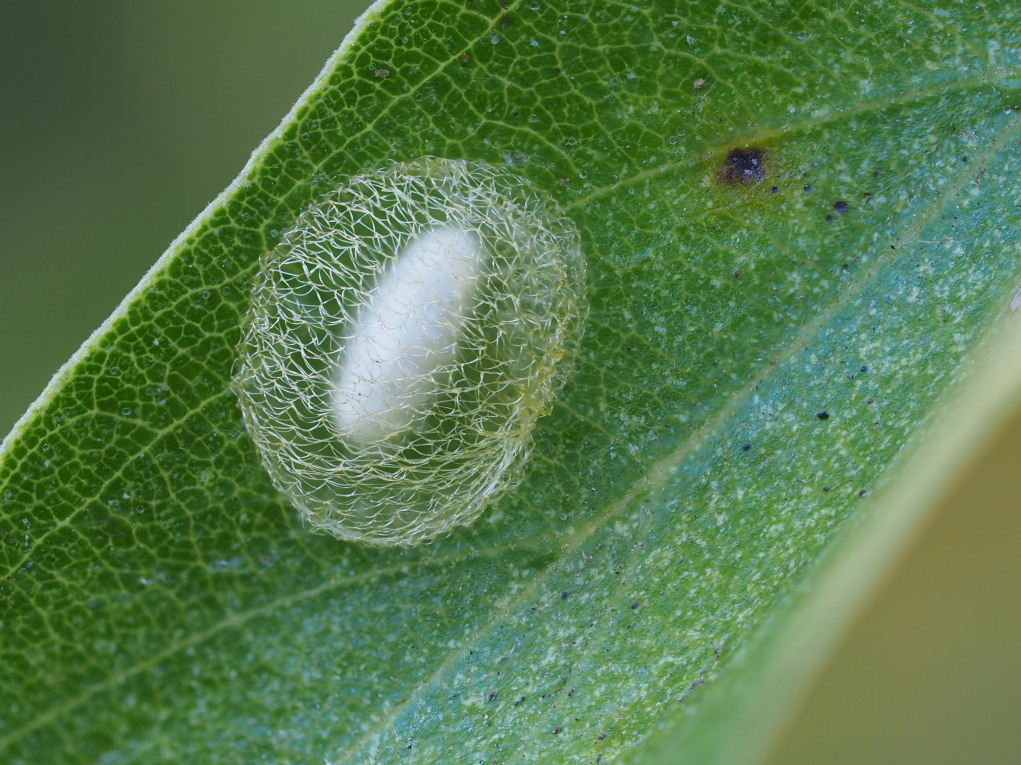 At full resolution I thought the Zerene Dmap (completely unedited) was quite a bit better than the out of camera stack, but it doesn't show so much now. these were the only pictures taken with a tripod.

This little exercise has challenged some of my previous opinions. I've been particularly impressed with how well the in camera stack handles pictures of flowers. Even in my butterfly picture the flower came out better than the butterfly. Yesterday I tried quite a few flower shots and I think that for close up this feature works pretty well. As you try to get closer, the advantages of more input pictures and the ability to edit the final image become more and more obvious. I think this may be a feature that people start off using casually and then become more serious about macro photography as they realize it's potential. I also think the focus bracketing can be a real game-changer for serious macro; particularly for live insects.
Top

Those are interesting results. I have never let a camera actually stack the images, I've always let the camera gather the stack, and then I do the actual stacking in Zerene.

Many thanks SteveB for capturing and posting these great stacked images for comparison. The beautiful puparium images are particularly helpful. The insect involved is likely a Microgastrine Braconid parasitoid wasp. The exquisite net-like cocoon, protecting the pupa in it’s white case inside, is a great detail to compare in the two stacked images (particularly directly over the white pupal case, where it is just a blur in the camera stacked version). The Serene stacked version is one of the most outstanding insect images ever posted to Photomacrography - IMHO as a retired Entomologist.

State of the art for image stacking mechanisms seems clear here ... hands down for computer-stacked at this point. Bit, isn’t it just a matter of development time until the computer routine is replicated in the camera? Digital photography is only a little over 20 years old, and (user-unfriendly) “stacking cameras” maybe 2 or 3.
Eric LaGasa
Tenino, Washington
Top

Thank you Eric LaGasa for the compliment.It's amazing just how generous the experts on this forum are both with knowledge and encouragement.

I was very excited to find out that that pupa is of a parasitic wasp! I had noticed the wasps lurking about that tree and showing an interest in the Acrea caterpillars. Who would have thought that they are such architects? Nature has many wonders even in one's own garden for those who care to look.

In camera stacking is clearly not yet a mature technology, but having experimented with the feature a bit more I felt that I did get some quite pleasing flower shots. I think this feature could be particularly useful when the background is a bit busy, allowing one to shoot wide open and still get the whole of the subject sharp. I think we will see quite a lot of development around this theme in the near future.
Top

Limit is F=140mm.
The mity is very near the front lens with a reducer ring glued on a filter.
Regards