Bondic® is NOT A GLUE, says the manufacturer

Bondic® is NOT A GLUE, says the manufacturer

Bondic® is a UV-curing plastic adhesive material that has been recently mentioned in a couple of threads here at PMN.

I've been noticing advertisements for this stuff for the last couple of years, although I see there are YouTube videos from back to at least 2015.

Somehow the ads have always seemed "too good to be true", but given the uses reported HERE and HERE, I decided to give it a try.

Breaking with tradition, I also decided to read the instructions before playing with the product.

In the cleverly pleated instructions glued to the inside of the case with some soft tacky stuff, I was surprised to find this comment:

Bondic® is NOT A GLUE and will not work like
one, the surface MUST be rough in order for the
fluid to grab onto the material when
cured.

I guessed that they're serious about this, because the instructions also list the website for the product as www.notaglue.com , complete with the red emphasis.

Elsewhere, the instructions refer to the product as an "adhesive".

I'm not sure what that difference is supposed to mean, so let me explain what I found.

The first thing I did was to dispense a drop of the fluid onto a microscope slide, press another microscope slide on top of it, and cure the sandwich with a few seconds exposure using the LED provided in the kit.

That worked fine, and the two slides were firmly fastened together: 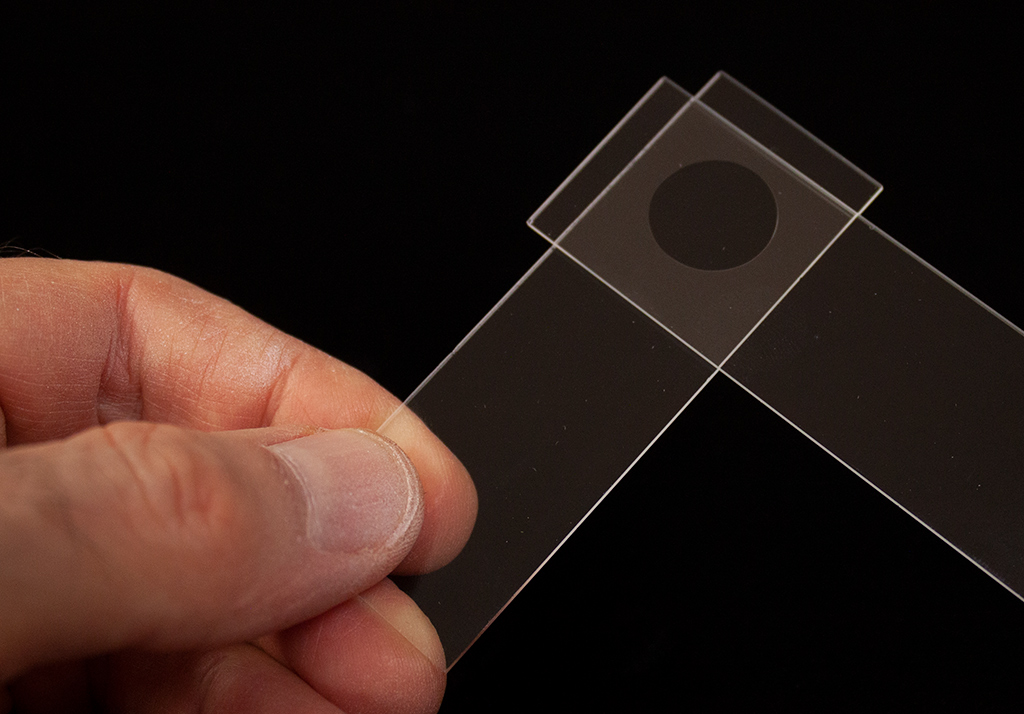 To test the strength of the bond, I then tried to twist and peel the two slides apart, expecting them to break.

But to my surprise, the slides separated without breaking, leaving one slide with just a faint outline of the adhesive drop, and on the other slide a thin disk of cured Bondic : 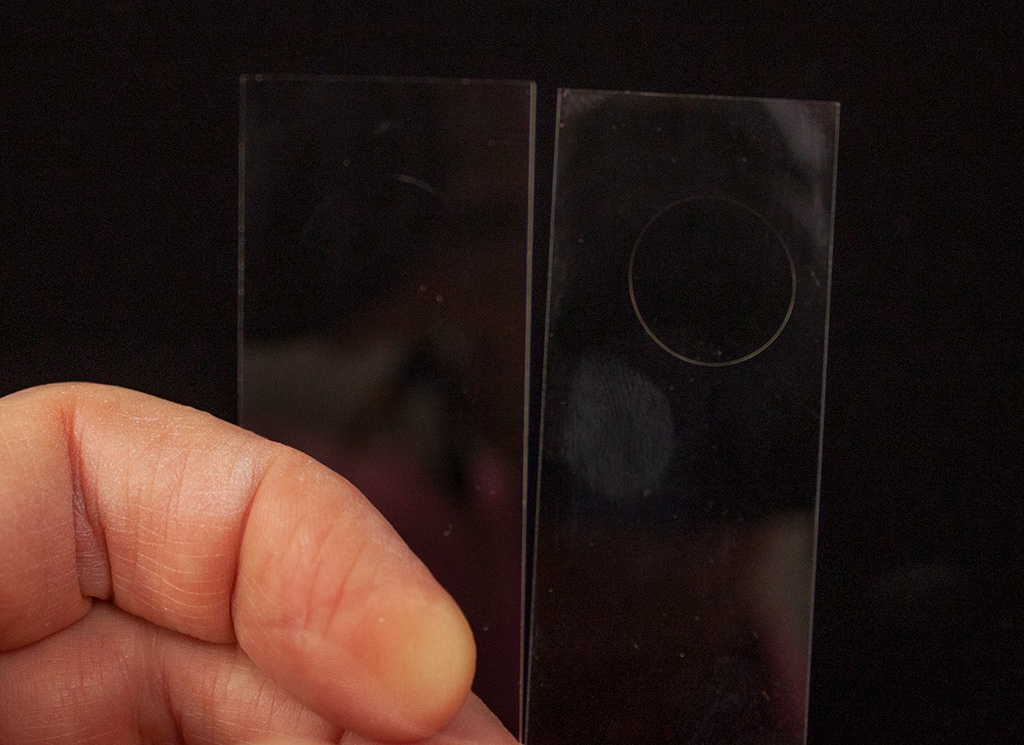 Continuing the investigation, I pulled out my finest forceps and attempted to separate the disk of Bondic® from the slide to which it was attached.

Again to my surprise, that worked very easily. The cured film pulled right off the slide, feeling very much like removing one of those protective films that come on shiny new purchases. 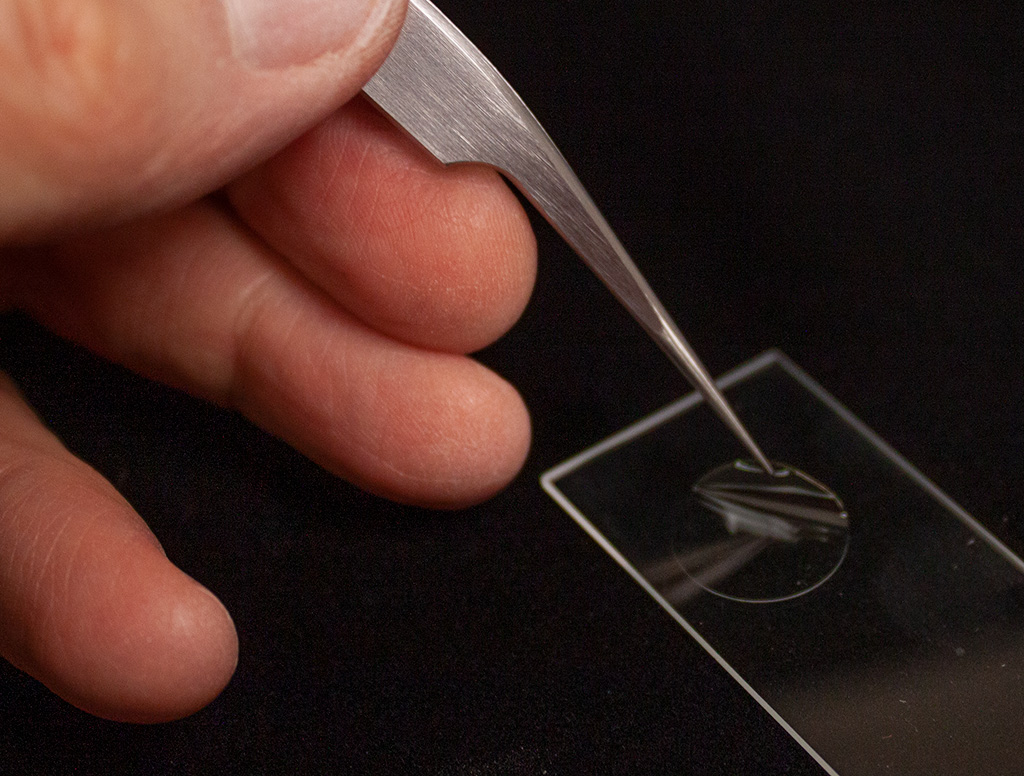 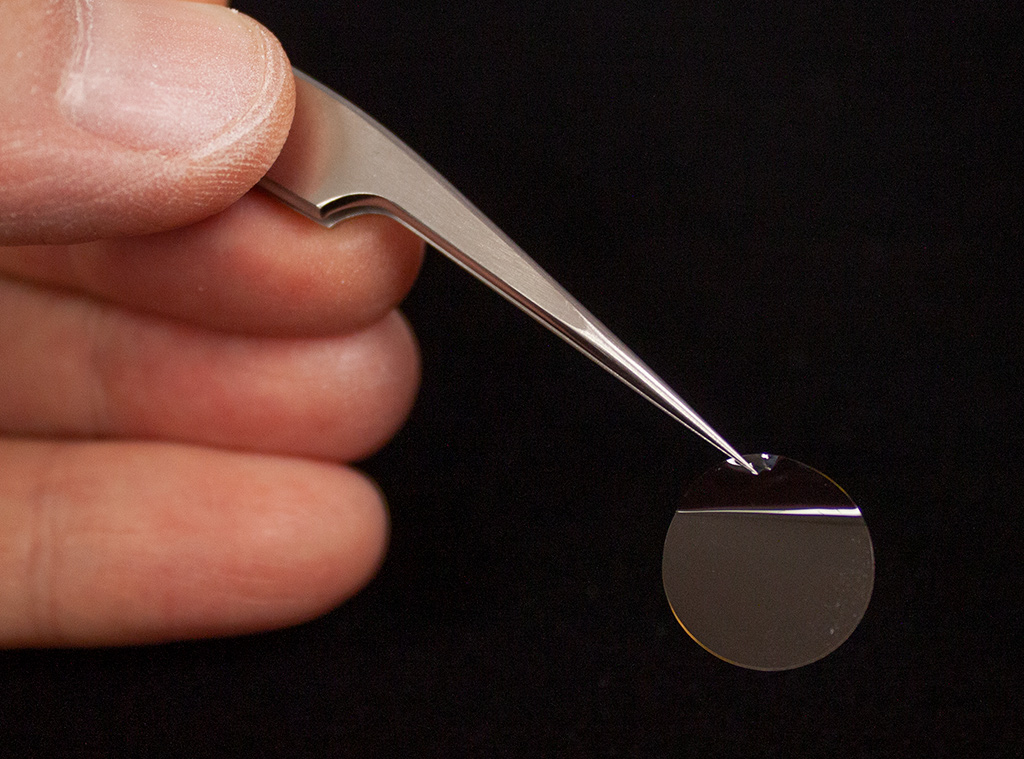 That flexible film thickness measured as 0.0015" by micrometer.

I also dispensed a drop on a paper index card, hardened that, and was surprised to find that the drop was not very flexible and could not be cut by pressing my pocket knife through it. Pretty tough stuff!

Finally, I clipped the head off an insect pin, put a small drop of Bondic near the end of the pin, and then, working under a dissecting scope, held the pin by hand in position against the abdomen of a small fly and cured it. The biggest difficulty I had with this step was squeezing the LED module with one hand, hard enough to turn the light on, while simultaneously holding the pin in precise position with the other hand. I expect that a little more practice would take care of that issue. 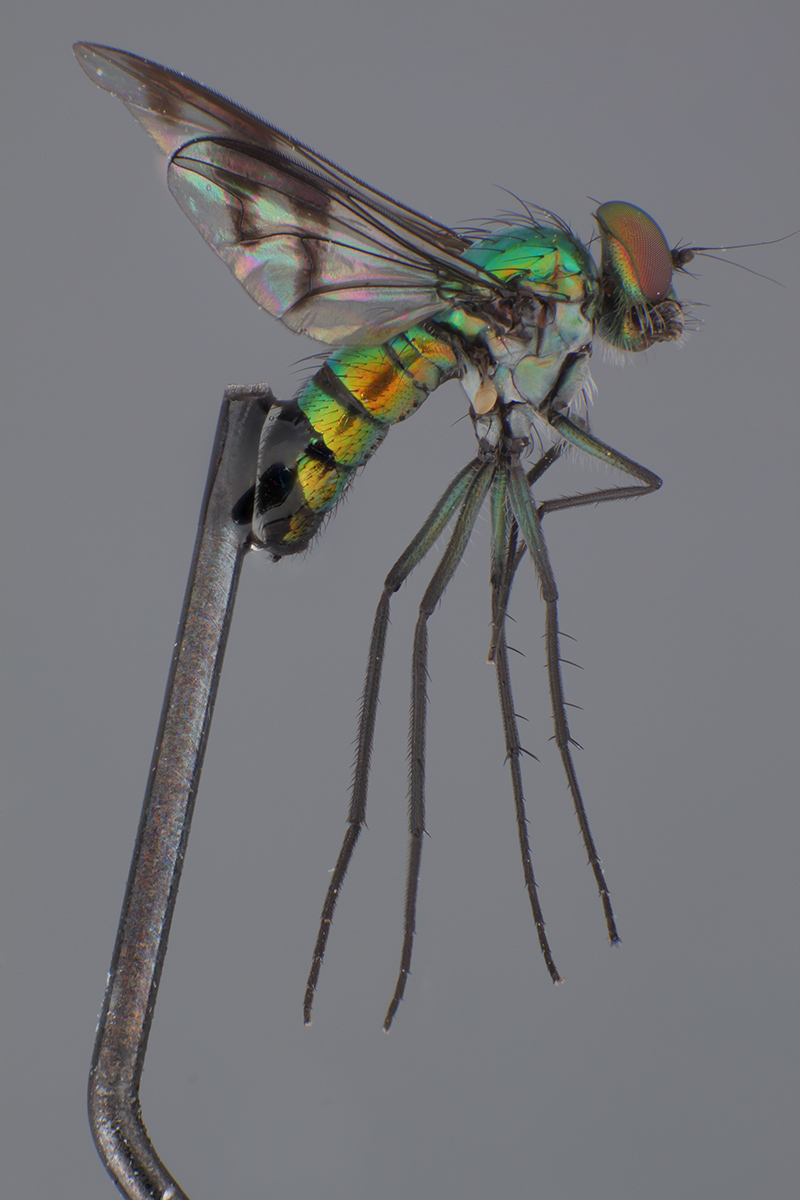 Working on this subject, under the scope, I was pleased to see that the Bondic wet the cuticle of the abdomen and flowed smoothly around the small hairs, but did not spread quickly into far-away areas. It seemed to be just about the perfect viscosity for this application. 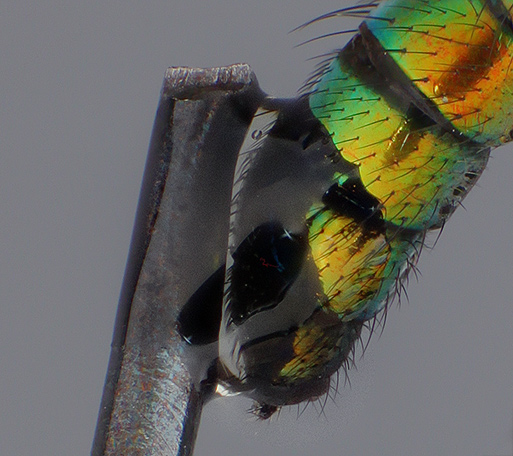 Summary is that Bondic is a UV curable liquid that hardens into a slightly pliable solid plastic that sticks to things mainly by mechanical interference. I expect it would be impossible to remove from any porous material, but it peels easily off glass. Re-watching the instruction videos, I have the feeling that some other product would be better for most of the featured applications. But for attaching holders to specimens, I expect this to become one of my favorite tools.

I wonder what the refractive index of this thin film is, is it close to glass? You probably know where I'm going already...

I've been trying to source some 0.4mm optical flats recently without much luck. This could be a nice alternative if I can find a way to control the thickness within a desired tolerance. All kinds of thicknesses can be created as a substitute for expensive optical flats if the RI is similar enough.
My website
YouTube
Instagram for Microscopy
Top

I don't know and could not find it quickly in search. An email to the manufacturer might get it.

By the way, my search turned up the odd fact that my local Ace hardware store says they carry a Bondic starter kit, listed as the same size as what I got at Amazon, for about half the price I paid at Amazon. That is very unusual, but also very handy if it continues to be true.

The Ace ad includes the interesting snippet that "With 1000's of possibilities, Bondic works where glue fails and won't stick to your skin." Won't stick to my skin? I suppose they mean that the uncured liquid would come off easily. I haven't tried either way, though.

In Europe there is this UV glue, as UV-Star from Geistlich with UV lamp.
I have been using it for months and am very satisfied.
It hardens under UV light faster than fast drying nail polish or superglue.
The UV glue is highly recommended, a good thing.

Can you peel it off leaves?

As someone tested this "not glue" for "gluing"

lens? I have some telescope doublets objetives and the transparence of the drop between the two microscope slides seem very promising.
Top

Its inability to keep two slides together would not bode well for that application.
Top

Yes. But even better, you can peel leaves off Bondic, leaving the Bondic plated on a nice flat surface like a microscope slide.

Pressing a microscope slide over two fragments of leaf, on each of which was placed a small drop of Bondic, and exposing to harden: 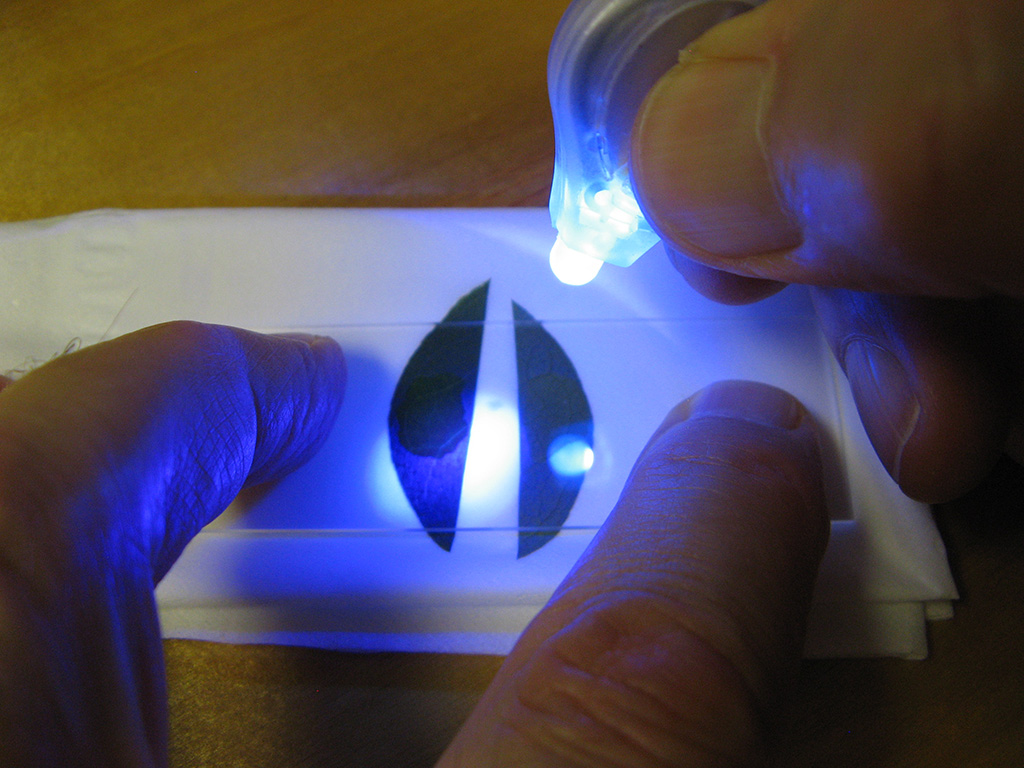 Angled to show the Bondic patches: 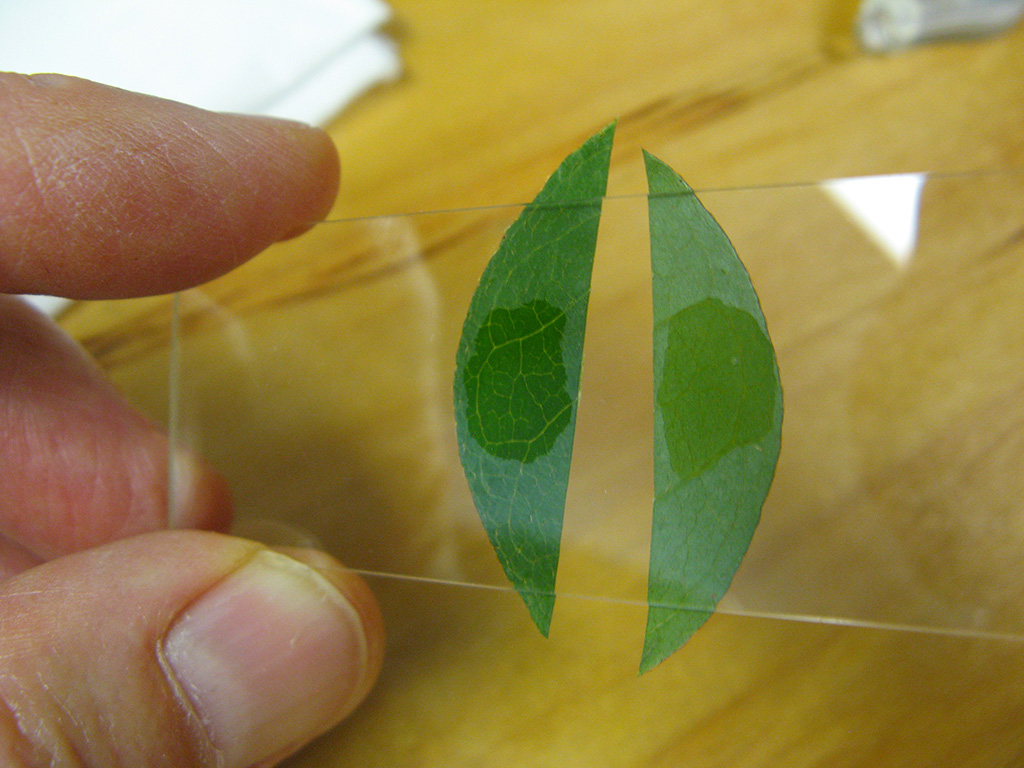 Peeling back the second leaf fragment, with the first already removed. 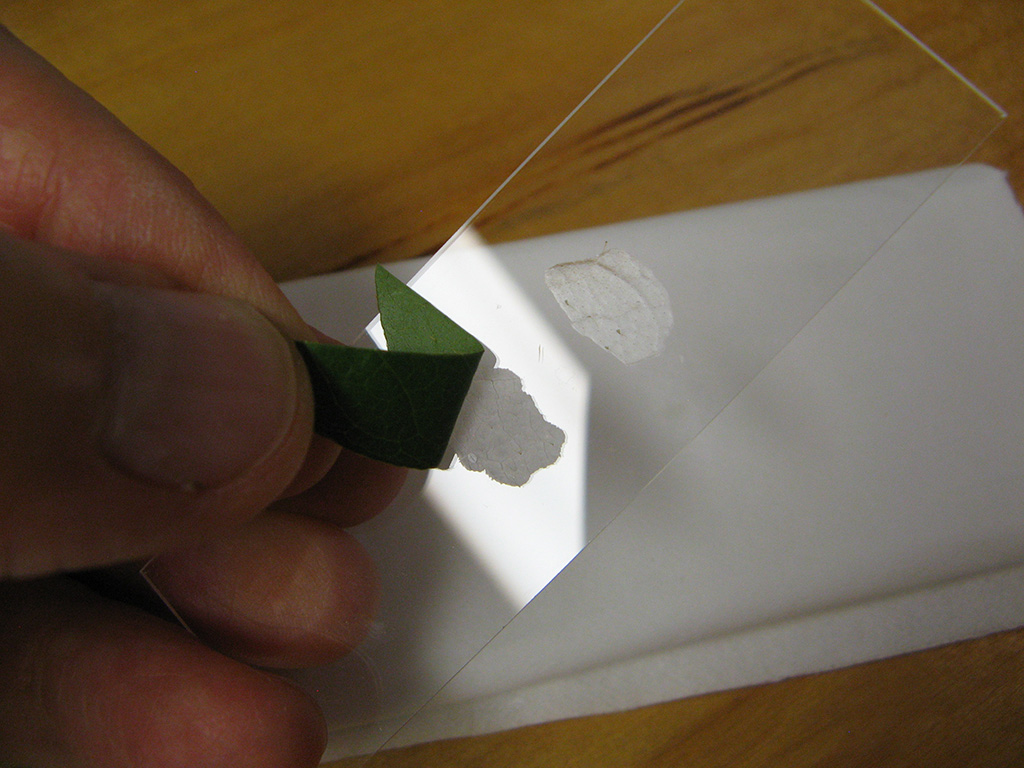 More precisely, "oblique brightfield" describes an LED lamp bounced off an index card that was half-covered with black paper, angled under the condenser. I like the quality of the light, and sometimes I like to demonstrate pleasantly low-tech solutions. 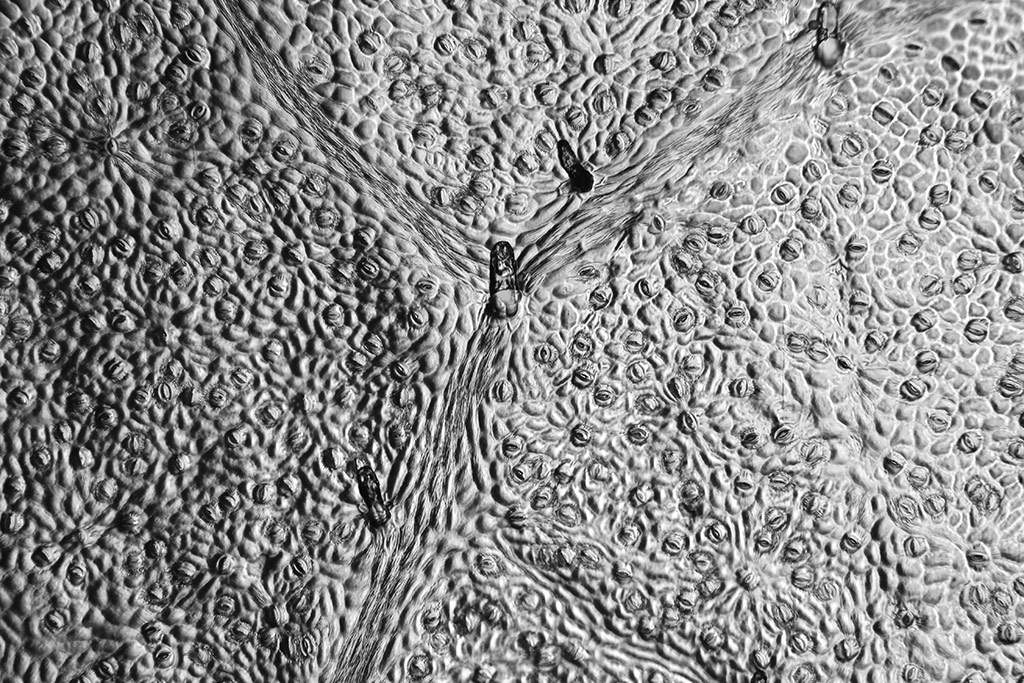 Cropped to actual pixels (not sharpened, and only a 3-frame casual stack): 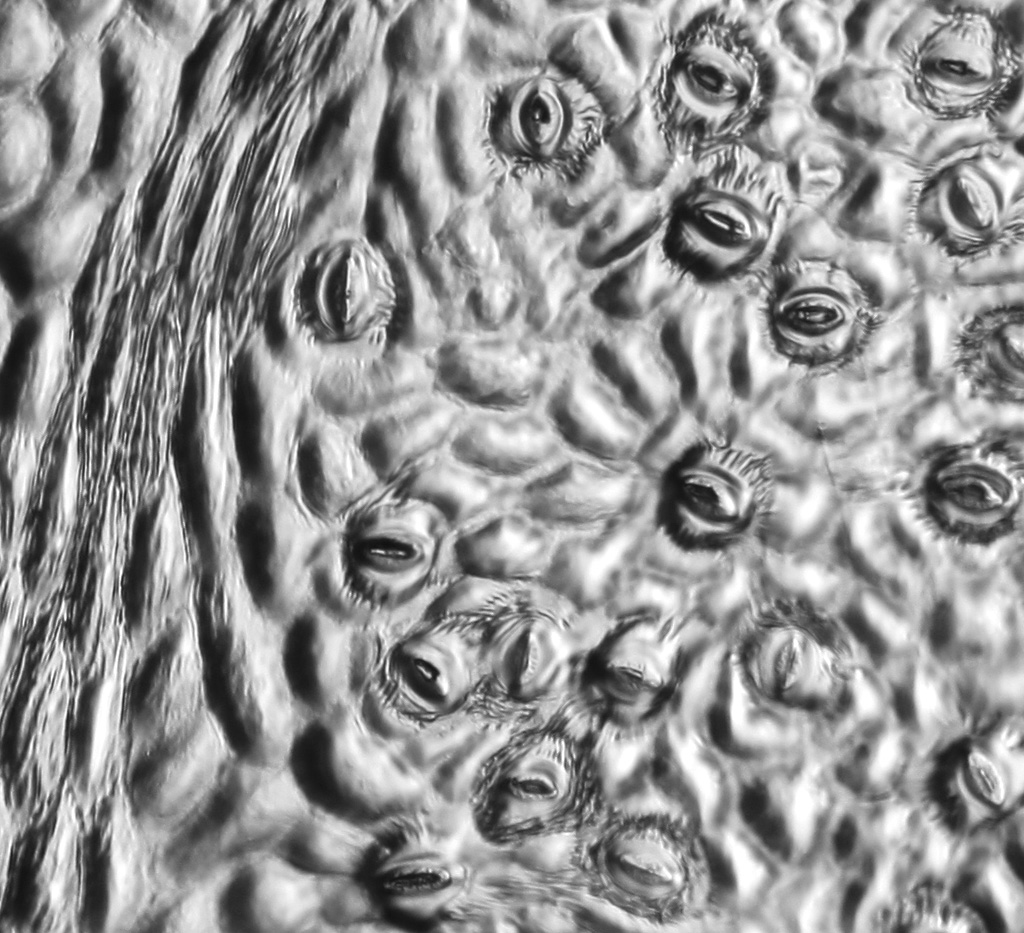 This process was so easy, and so much fun, that I found myself literally laughing and yelling to my wife, "You gotta come see this! This is a game-changer!"

Here's another couple, whole frame and actual pixels crop from a Linden leaf: 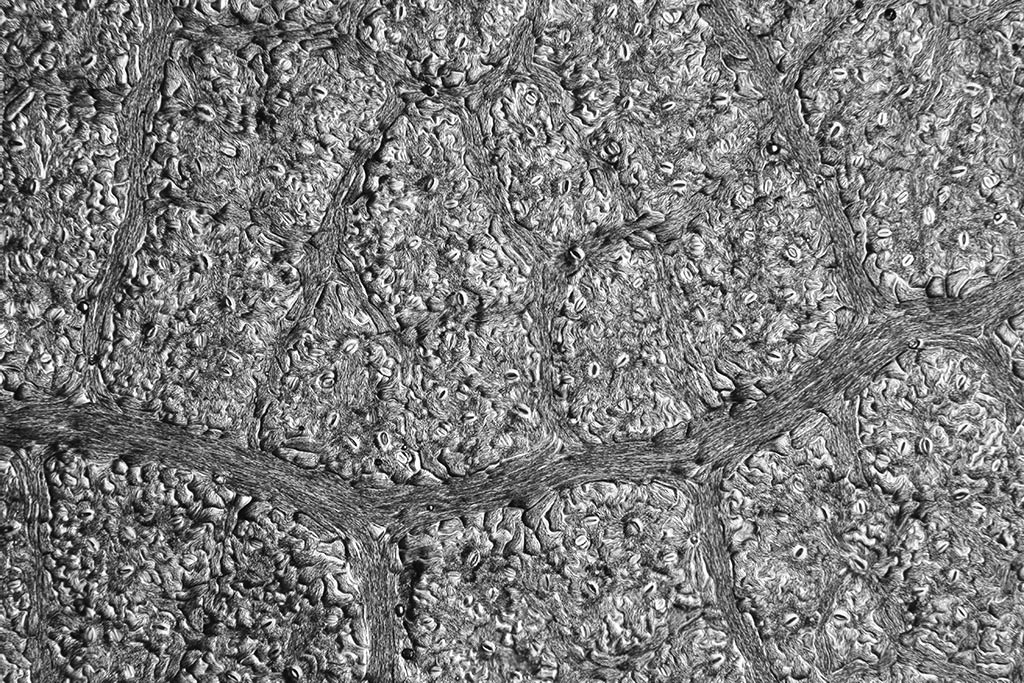 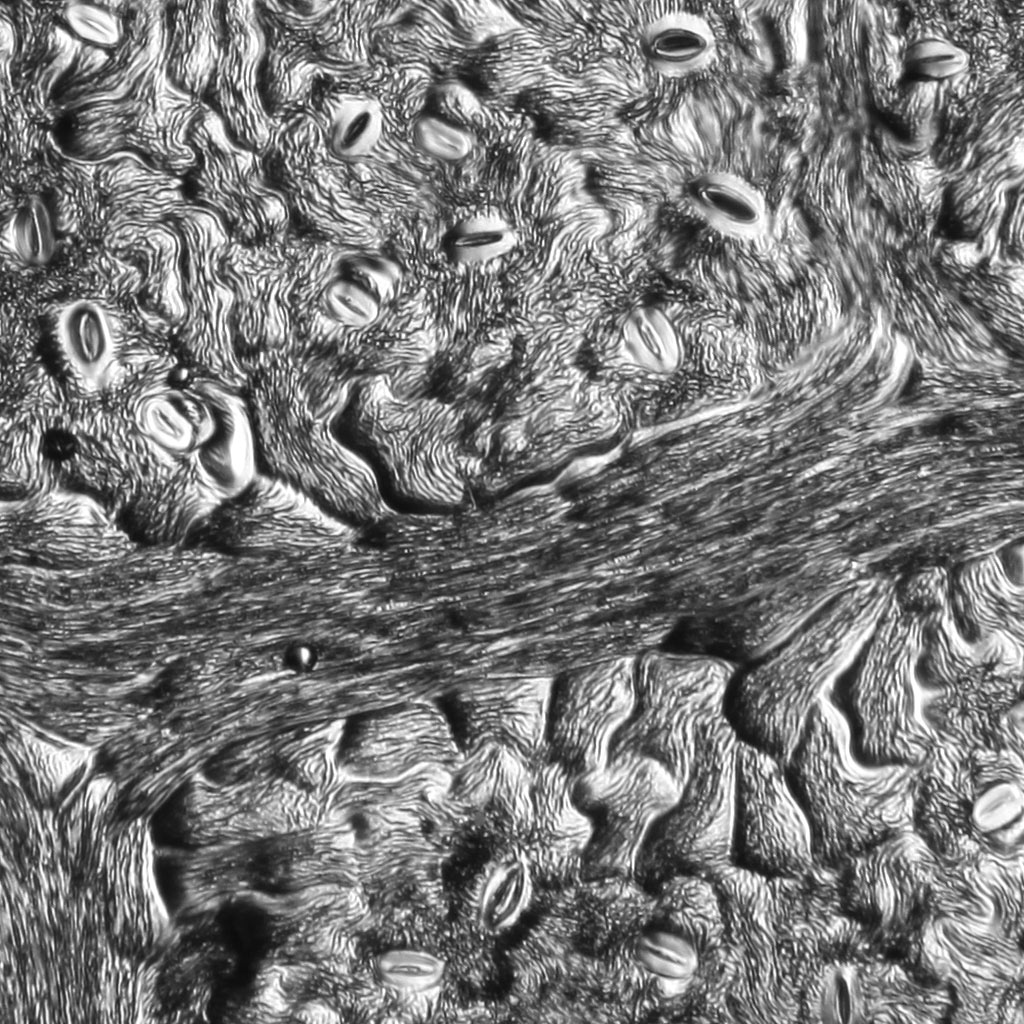 lens? I have some telescope doublets objetives and the transparence of the drop between the two microscope slides seem very promising.

Scarodactyl wrote: ↑
Sat Jul 10, 2021 10:19 am
Its inability to keep two slides together would not bode well for that application.

I have other evidence that there could be problems.

A couple of days ago, I glued a June beetle to an insect pin, to make the images shown at https://photomacrography.net/forum/view ... 27&t=43785 . Image #2 there shows the overall setup, with the pin glued to the back of the beetle.

After shooting the beetle, and running the "direct manipulation" experiment of nudging hairs with another pin while looking through a stereo scope, I left the beetle on its pin sitting under the scope.

Today, the beetle and pin are reconfigured as follows. You can see the dot of Bondic, still stuck to the pin, while the beetle has fallen off. 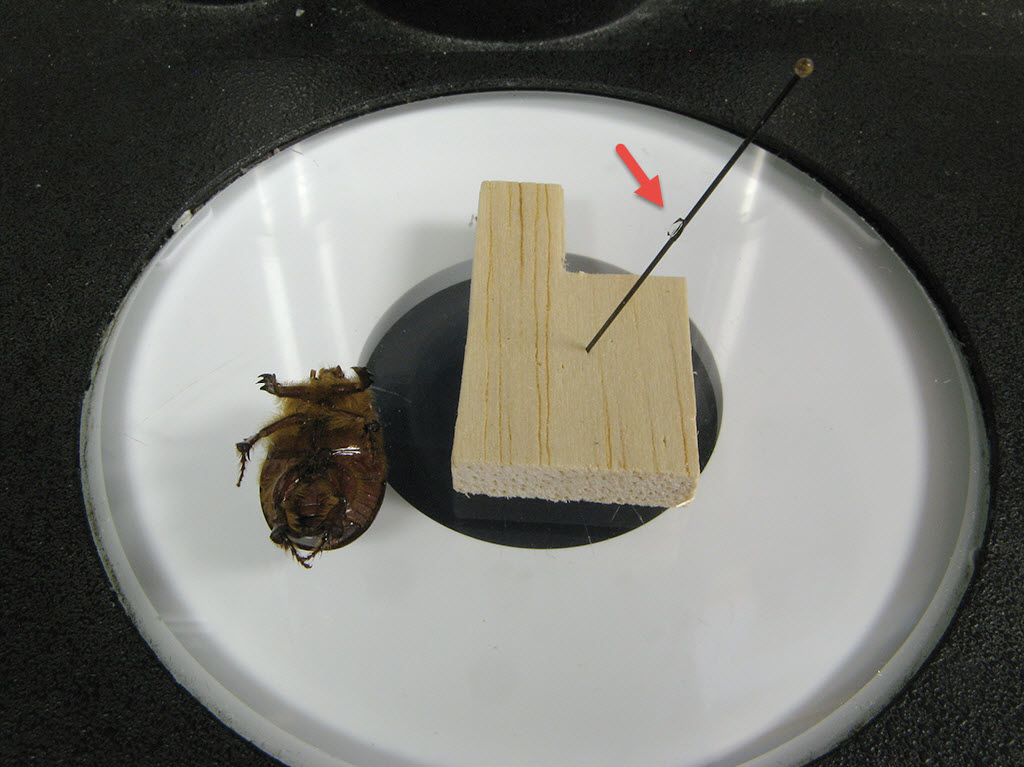 So, for mounting bugs like this, I will not consider Bondic to be a permanent solution.

That said, I know from other experiences that insect cuticle like this is difficult for adhesives, probably because of a thin layer of wax. So maybe it would be OK between two pieces of clean and rigid glass.

There is another issue, probably not relevant to the lens application, that in some applications the surface of the cured Bondic may remain tacky because oxygen in the air interferes with polymerization. This issue, and some ways of attacking it, are discussed at http://www.modelcarsmag.com/forums/topi ... ke-bondic/ .

Those are FANTASTIC casts, Rik. This really could be a game changer. Botanists often need something like this. For one thing, it would let us easily check for polyploidy, as guard cells are often different sizes in tetraploids vs diploids.
Lou Jost
www.ecomingafoundation.wordpress.com
www.loujost.com
Top

Ah yes, you've got surface replicas. It's a technique in material science, biology, etc. and often used to picture a surface for samples that could not be observed directly for various reasons.
For example, you can study such surface replica in SEM, while leaf would be permanently damaged by the vacuum and electron beam, unless of course it was critical point cryed, freeze-dried or cryo-cooled on SEM stage.
“Thoroughly conscious ignorance is the prelude to every real advance in science.” - JCM
Top

Excellent -- I'm glad they look good to somebody who knows what they're doing. I think these are the first leaf casts I've ever made, so while they looked good to me I had no idea what I might have missed.

On the optimistic side, I can definitely say that this technique can be learned by a newbie in just a few minutes!

For field use, one issue would be needing to work in subdued light to avoid premature curing.

On Bondic's YouTube channel: "How Not to Bondic -- Sunlight".

Lou Jost wrote: ↑
Sat Jul 10, 2021 6:40 pm
Those are FANTASTIC casts, Rik. This really could be a game changer. Botanists often need something like this. For one thing, it would let us easily check for polyploidy, as guard cells are often different sizes in tetraploids vs diploids.

Excellent -- I'm glad they look good to somebody who knows what they're doing. I think these are the first leaf casts I've ever made, so while they looked good to me I had no idea what I might have missed.
--Rik

During the past six weeks I have been measuring guard cells routinely for exactly the reason stated by Lou. I have been using cyano-acrylate glue, which works, but it seems Rik's way is faster, easier, and probably has a higher success rate. At least the total area and the quality of the impression are impressive! Interesting the indirect lighting too. Only for measurements I think I'd still prefer substage lighting, for it better shows the outlines of te stomatal complex.

Now see if I can find the same product here. "uv-star" is by far not the only brand sold in Europe...
--- felix filicis ---
Top
Post Reply Previous topicNext topic
21 posts