Further to this topic, I'm dealing with some frustration having to switch USB plugs to download images after shooting a stack, actually, a lot of frustration - https://www.photomacrography.net/forum/ ... ight=a7rii

Has anyone attempted to wire up a male 15 pin USB to provide both image transfer and shutter control from StackShot? I am thinking of giving it a shot using the normal USB 5 pins A1-5 for data transfer, and pins 4 and 2 for shutter control. I'd be grateful for any advice.
PaulF209
Top

Is this the connector you are asking about? Are you seeking advice for constructing a combined remote-shutter / USB 2.0 data transfer cable?

I have made such cables for Olympus's similar but somewhat tighter, 12-pin multiconnector.

What do you need to know?
– John
Top

You nailed it, yes, that is exactly the connector I am referring to, from the same supplier. I am looking for advice on building it, and am curious if it will perform correctly without damage to the camera. I dont expect any, and intend on adding a separate switch to prevent stackshot from sending the 3 volt shutter pulse during data transfer, if I were to trigger by accident.
PaulF209
Top

I have zero experience abusing Sony cameras, but from what little I have read, like Olympus, they expect the remote control to ground the FOCUS and SHUTTER inputs to focus the camera and take a picture. You can configure Olympus µ4/3rds cameras so that they power up and pretend to be disk drives, when you plug them into a computer's USB port. While they are pretending, they ignore the remote shutter inputs.

The cameras watch the USB VBUS (+5 power) signal to detect when you plug them in and unplug them. Inserting a toggle switch that interrupts and reconnects that wire between the computer and camera will do the trick – plus a resistor and capacitor, if you wish, that may make the switch more reliable and long lived. (The added parts will not hurt.)

Is something like that that you have in mind?
– John
Top

That is precisely what I had in mind! My thought was to put the switch on the shutter trigger terminal, but your suggestion of using the 5 VDC Bus pin makes much more sense.

Grateful for your advice! Thanks
PaulF209
Top

Here is an old version of an Olympus remote shutter, tethering box, before I flipped everything upside down and made a peek inside less interesting: 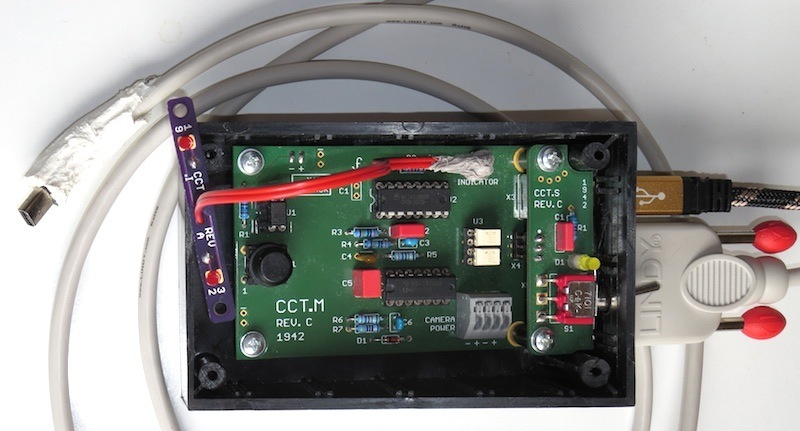 At the far left is a salvaged and potted Olympus 12-pin multi-connector that plugs into the camera. At the right is a red and silver toggle switch that connects and disconnects the computer, as described above. Near the switch is a yellow LED that warns when connected. Off to the right are plugs to the camera (grey) and the computer (gold and black with USB logo).
– John
Top

I drive a Sony A6300 with a laptop and drive the Stackshot the same, both via USB.
The trick used is to use both at the same time Sony Remote for Setting the camera / liveview / Shot / direct picture transfert after shot (don't need any SD card in the A6300) and Zerene Stacker 's Stackshot tool to drive the Stackshot unit.

In order to take a picture, you will have to parameter ZS Stackshot's tool external trigger command "robot" is used to move the mouse and "clic" on the Sony remote shot button.

It work fine for me since years.

ZS has to be set as "administrator"

I hope it will help.

Finally had the time to get back to this, and greatly appreciate all the comments. Very helpful, but not exactly the solution I was looking for. After more research, and hacking into the StackShot shutter (only) cable, came up with this simple solution. The switch on 5 VDC+ works exactly as Jfiresto describes. The 15 pin multiport connector is available at reasonable cost from Studio1productions.com.

When I was setting up an A7RM4 for use with the Stackshot tethered I was concerned about having to get into one of these clever hacks, but I had the universal IR release available with the Stackshot, and it works fine, not the cheapest way but certainly the laziest.
Top

Steve S. Necessity is the mother of all invention. Laziness is the favorite Aunt. Well done!!!
PaulF209
Top

Thanks for the followup. I am happy that the suggestion to switch the USB VBUS connection did the trick. Sometimes the simplest solutions work out the best – and a simple switch, mechanical or electronic, is hard to beat.
– John
Top

Not sure if still of interest, but there are ready-made cables to buy that split the Sony USB into a USB to the computer and a 3.5 mm connector for the trigger button. I have used such cable for a couple of years and tethering using Capture One and triggering with a simple trigger button connected to the 3.5 mm connector. Should work for the Stackshot as well I assume.

Here is the link to the cable: