In about a week I am expecting an Optiphot stand. It won't work here though, for it's coming from the US and runs 110V, where we have 240V. I see in previous threads that there's no simple switch inside, but the whole transformer block is a 110V item. I suppose I could have a 240/110 transformer powering it. Only I have no guarantee that it will power on then. The previous owner was a bit cryptic about that ("Powers on briefly") so I bought it as not functioning.

Therefore, I expect I shall have to replace the transformer. Can I use just any 12V power supply that has sufficient watts aboard (50 for the lamp, another 18 for the intended epi-illuminator)? In the above mentioned discussion it says somewhere "Transformer and regulator". What exactly is a regulator in this context?

Also, I am at loss about the rating of the fuse: 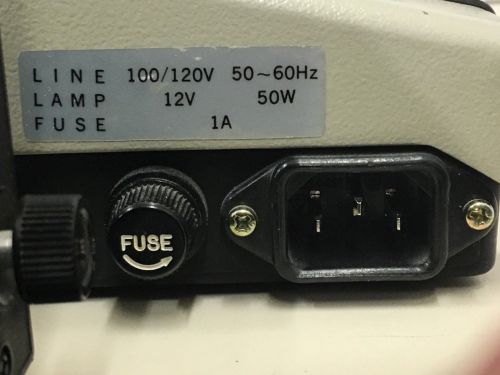 iconoclastica wrote:I suppose I could have a 240/110 transformer powering it. Only I have no guarantee that it will power on then. The previous owner was a bit cryptic about that ("Powers on briefly") so I bought it as not functioning.

Therefore, I expect I shall have to replace the transformer.

I use such a 240/110V converter to power a 110V microscope. Am I right in understanding that you don't want to do this because you suspect that the microscope electrics don't work any more?

If I were you I would have an electrician look though it first. If you're lucky, it's a simple defect that can be fixed easily.

Often it's the potentiometer and in my case it was merely a broken contact at the bulb fitting!
Top

I have a preference for appliances that plug in themselves, without extermal PS. Let me be the first to remark that my reasons for that may be not entirely rational, it's just the way I like it better. It's easier to switch off (albeit not in the phots that have the switch after the transformer).

But if I am to have an external PS, why not an 240/DC12V one. And yes, I am expecting problems that may be solved indeed with a little help or not. But I'd like to better understand my options. Even if I choose for the 240/110V pre-transformer option (that, BTW, I still need for my sewing machine), thoughts will keep nagging me if it could be done better.

Further, I am constructing a light (led) for the epi-illuminator. I think this can be more elegantly done by branching off a replacement PS with a few more watts under the hood.
--- felix filicis ---
Top

Is the supply AC or DC on the 12V side?
I assume the bulb gets adjustable DC rather than pulsed?
Chris R
Top

It's a good thing to question assumptions. I appreciate that.

There is a rectifier, what makes me think it's DC. See the sketch in http://www.photomacrography.net/forum/v ... 263#215263. I also assume it is not pulsed as I don't think it was a common design yet in the 1980's. Neither I do see a PWM component in the pictures, but that perhaps isn't a reliable observation..
--- felix filicis ---
Top

From the manual it is clear that the voltage is varied to achieve the desired colour temperature and brightness of the lamp.

Also in the manual, it says there is an input voltage change-over switch at the bottom. I think its the part indicated by mistake as rectifier in this message. Maybe everything will turn out easier than it seemed. Only if it has such a switch, I don't understand why it says 110V on the spec sticker.

I am watching the mail box to see if the postman then arives sooner.
--- felix filicis ---
Top

It looks like there is a slide switch for input voltage selection 120/240V (where you though was a rectifier) It should be marked as such on the outside of the switch casing. The primary of the transformer may have 2/ 120v windings. in 240v position the switch effectively daisy chains both primary windings. From the attached photos there is nothing in the small circuit board that can cope with that amount of current. Looks like a power transistor attached to the casing where lead wires exit. The casing acting as a heatsink. I would look to this device if things aren't working. When a bulb dies it can take out a semiconductor. It saves a fuse from blowing lol. I don't see any large value smoothing caps. Maybe not needed here as bulbs are happy with ac/dc. The DC will be on the ripply side. Component wise, there is little that can't be replaced or substituted. Be sure and careful. We can't be there.
Top

The socket looks like a standard US 120VAC 3 prong socket. If the switch is in fact as 120/240 selection switch, then you will need to wire in a different socket, or use and adapter for the 240VAC.

Be careful as you can damage things easily with 120VAC and much more so with 240VAC!!

If you can access the transformer primary windings you can measure the winding resistance with a good DVM, the lower reading will likely be the 120VAC and the higher reading should be ~2X the lower for 240VAC connection.

The socket looks like a standard US 120VAC 3 prong socket

I think these are voltage independent standard. At least it looks like the ones we use here for 240V to me. My cold-light has one, marked AC-110/220V.

It's a long time since I fooled around with this voltage difference. When I was a child, I switched the wireless from 220 to 110, to get louder sound from remote stations (hey, that's more than 40 years ago!). In fact it worked out well for a while, but I rapidly undid it when I saw smoke curling out. My parents never found out, for the 220 circuits still worked afterwards. I'll try to be more careful this time

Meanwhile, tracking shows that in the past few days my prospected microscope has visited five states already, but hasn't even boarded to cross the main.
--- felix filicis ---
Top

When I was - rather young - I got hold of my father's AVO7 and decided to measure stuff.
He couldn't account for my "wrong" readings of light bulb resistance, not knowing it varies with temperature. Interest piqued, I determined to measure the mains.
240VAC it says, so I half-plugged in a plug, found AC Volts on the meter and measured that on the exposed pins.
13A it says, so I found AC Amps and did the same for that.

I have the meter now - remarkably it still works.
Chris R
Top

It's a week now since I bought that microscope. It has traveled for about 1200 miles, and 's got removed further from me for about the same distance. I think I am beginning to understand why US shipping cost are that high...

And the lamphouse fits the epi-illuminator. So now I can compare that with my led adaptation, but I think I'll want to keep both.

After lingering for a week and a half in the US, my Optiphot suddenly jumped over the ocean, landed at Heathrow, got lost, and before it was reported as found again I had the mail mailman at the door.

There was an electrical prblem indeed, which was no worse than a bad contact in the plug of the lamp. I borrowed the 120V converter from my sewing machine and then it powered up neatly. Only the voltage meter is done for, I suppose. If I interpret the electrical design (below) well, then it sould be precisely adjusted. But it reaches the 12V too soon, and somewhere around 6V it makes a jump up when turning down.

I traced the wires and draw the scheme. Someone might find it useful once: 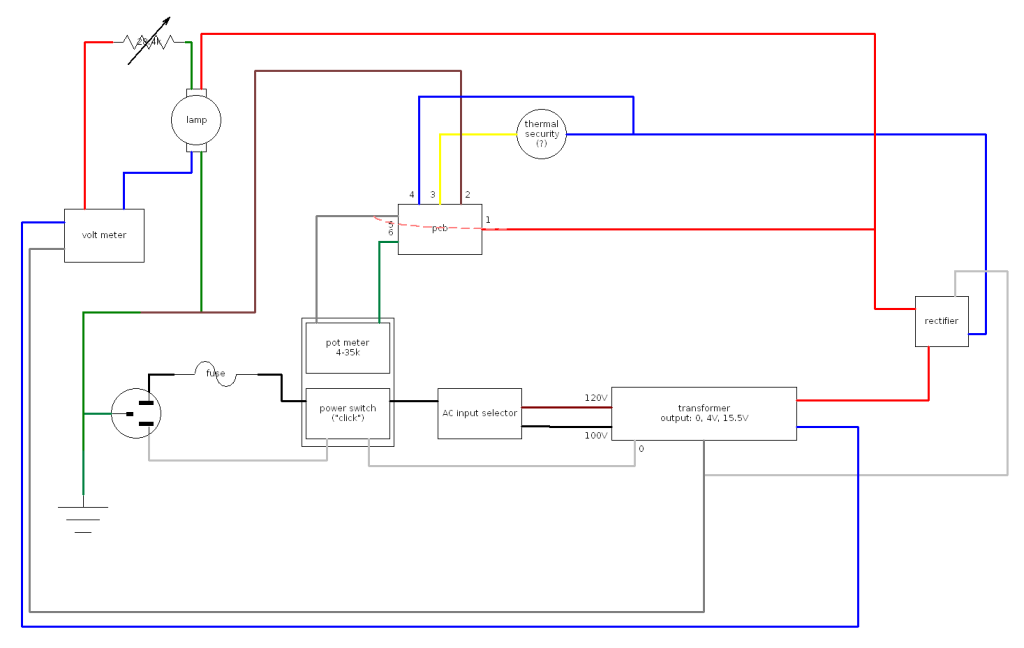 EDIT: corrected version in message below -----

The grey and white wires are transformer-zero. Mass is half-way between plus and minus DCV. There are two DCV levels: 4V (according to the transformer) and 0-14V. Besides the obvious potentiometer (the wheel at the lower left) there are two more variable resistors: one that's connected to the volt meter that may be intended to calibrate the meter. As said before, in this microscope it has no notable effect. And another one on the pcb, that I suppose sets the minimum output voltage.

There's a big, round white thing screwed to the bottom of the microscope where the metal mass is thickest. I suspect it is some security against overheating?

Now I have several options. Easiest is to leave it as it is. I would still need to buy another transformer (240>120V), for this one already has a function. It will use too much energy, but more than this I could do without the extra heat in my wroking room.
Quite attractive it would be to rewire the internal transformer so it eats 240V. I won't be able to do this myself, but there are peolple with tin on their fingers who could help me with it.
Alternatively I could replace the transformer. It seems to me that 12-15V/70W could just easily slide in place without much (any?) modification to the low-voltage circuit. I would like to add a 12V and a 5V outlet though to power the epi-illuminator and upcoming projectes to drive the stacking.

There are a number of 120~240VAC to 12VDC @ 8A converters available on eBay, these are very reasonable ($10~20). If you don't need a variable voltage, these might be ideal to replace the entire electronics. If you need a variable output then, there might be some LED dimmers that work off 12VDC that might work.

All of these devices are available from eBay and very inexpensive.

Mike, that is what I did for the cold-light source a while ago. Only there I could easily replace the existing knob and burnt pot-meter with the power switcher.
Now I have an excellect power wheel with off switch, well placed and easy to use. I would like to keep it.

As I see it, I can use such a power supply indeed. Only the physical space in the stand limits the choice. They produce a reasonably stable 12V that I can connect just after where now is the rectifier and leave most of the rest as it is. The power off-switch will of course go before the PS. The volt-meter I will replace by a new digital one. I could do without it, but why having a dead meter or a hole if I can have a replacement for next to nothing.

Then the auxiliary 12V lines can be branched off immediately after the PS, and also a 5V step-down module too to feed the arduino and possibly the new volt meter.

The biggest question I have: There are constant voltage and constant current sources, and it's not always clear on ebay what it is. Does that matter here?