I suggest lighting the white paper from behind. The razor will then be black.
Lou Jost
www.ecomingafoundation.wordpress.com
www.loujost.com
Top

Hello Lou,
Good idea, but I have a problem with the illumination, because the object is being moved in my current setup.
So, I have to assemble a new mount for the razor blade.
BR, ADi
Top

Hello everybody,
Before I start with the back light illuminated razor blade I would like to show you a MTF-chart of the corner of my previous test-picture (128x128 px). 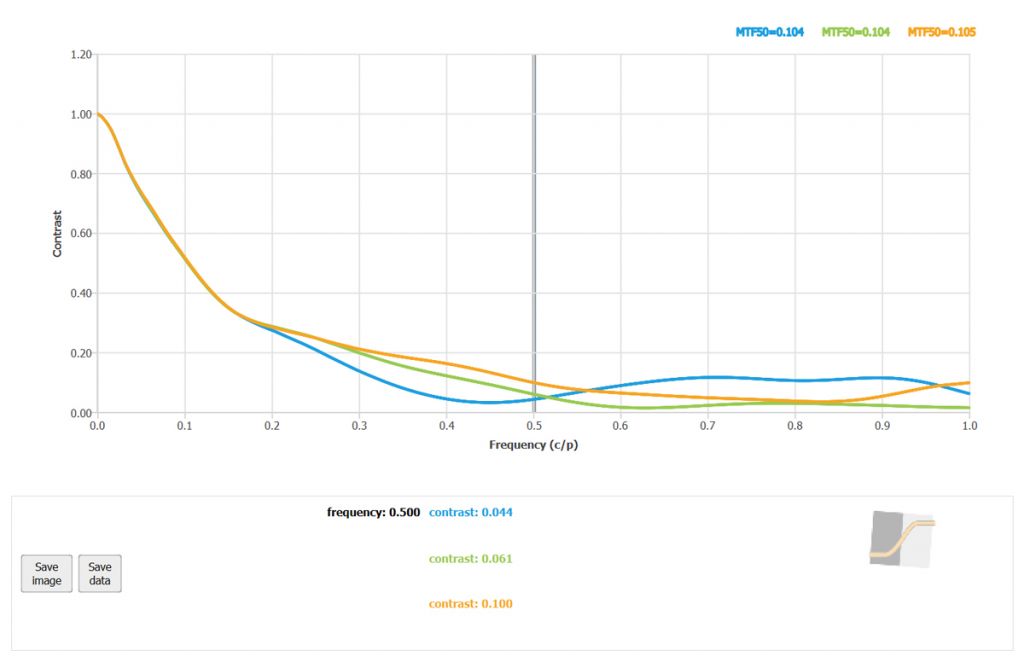 Hello Lou,
I have just prepared a stack of the razor blade illuminated with the back light but the structure of the paper has been more visible then before

Can't you increase the exposure so the structure of the paper disappears? Also, it doesn't need to be in focus, as long as the razor edge is in focus. So you could make the detail disappear.
Lou Jost
www.ecomingafoundation.wordpress.com
www.loujost.com
Top

Hello Lou,
Upps, I thought that the white part should be in focus too.
BTW, no problem, I can remove some pictures from the stack.
BR, ADi
Top

fvdbergh wrote:Anyhow, come to think of it, I do not know whether Zerene will stack the channels individually --- it has been years since I last used (or updated) it. But it would actually make sense to do the stacking per-channel ....

Stacking the channels independently makes great sense in concept, but it doesn't work out so well in practice. The reasons are unclear.

Historically, stacking per channel was the first thing that was tried (in other tools, not in Zerene Stacker). It worked pretty well, but tended to introduce color shifts instead of just correcting for LoCA as we would expect.

Knowing those results, I designed Zerene Stacker to make decisions based primarily on luminance. PMax now has an option to consider RGB separately in making decisions, but in any case whatever decisions are made get applied to all three channels simultaneously.

It would take a fair bit of code and memory to process the channels separately, so whenever the question comes up, the first thing I do is to ask the user to do a quick prototyping run with their own images. The quick prototyping run is to use say script automation in Photoshop to turn a single RGB stack into separate R, G, and B stacks, run each of those through Zerene Stacker, then merge the results back together to produce an RGB result with the channels handled separately. To date, several people have run that test, and in each case the response was basically "hhmm, well it ran OK, but yeah, the results don't seem any better".

My expectation is that processing the channels separately would help in special cases, like when the subject is actually monochrome and you're trying to back out LoCA. Stacks for MTF mapper come to mind. But for natural scenes, I've gotten pretty skeptical because of the tests described above. I'm sure that processing the channels separately is still somewhere on the list of possible future features, but realistically it is so far down that it will never happen.