Optical breadboards, is it better to separate?

Optical breadboards, is it better to separate?

Im getting tired of DYI'ing everything from old wooden table tops and shelves so im considering buying one or more optical bread boards for my setup.

I was wondering if anyone has any experience whether or not its better to place camera mount on one breadboard and subject positioner on another to reduce vibration or if its better to have them on one board?

I have been experimenting with to separate mounts made from wood but im not sure what's actually the best way to go, just wondering if anyone has any insights?

My old rig was on one (oak tabletop) board: 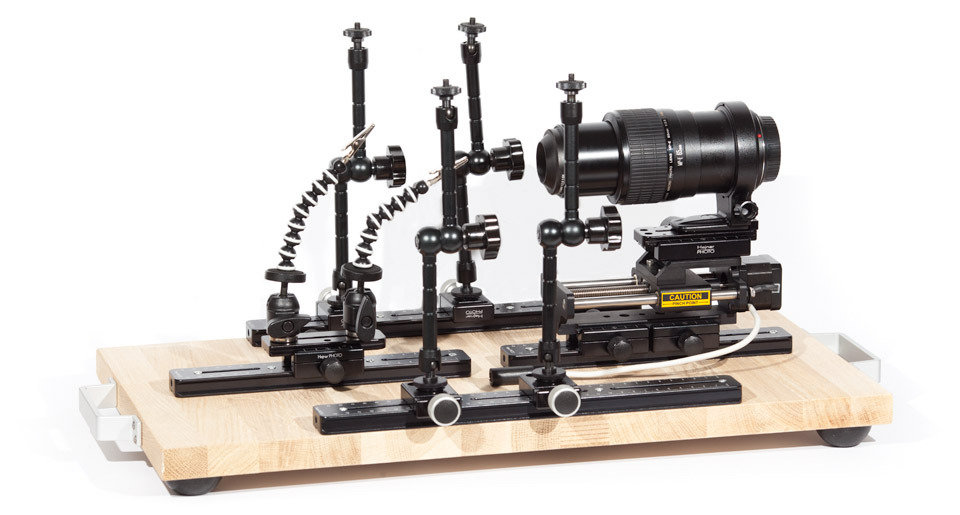 which is semi ok but very annoying to operate in practice as its difficult to get your hand in to position the subject and the whole thing rest on sorbothane half-spheres which I actually think makes it more prone to vibration unless I weigh it down with a lot of weights. The subject mount is complete crap so that definately needs replacing.

Optical breadboards are the way to go in my opinion. I've used one (now on my third, much larger than the previous) since I began on this merry adventure and could not imagine using anything else for bench top setups. All those 1/4-20 tapped holes will accommodate almost everything you would like to attach, just about anywhere on the board.

A single breadboard would be preferable. If you are based in North America this will not be a problem, otherwise shipping costs can be expensive if purchasing from overseas.

Tha was my thought as well. I live in a small apartment and I dont have access to any kind of workshop so I have to build everything with hand tools on our dining room table (my wife is very forgiving) which im sick off

I would rather spend my time doing actual photography work

Do you have any recommendations size wise? I was thinking of a 12"x24" board?
I will be using a stackshot and some kind of subject mount that I havent figured out yeat. I would also like to mount my mt-24ex off camera to minimize the weight on top of the stackshot.
Do you use any feet on your bread boards?

I just got a reply from the german thorlabs division saying they can send imperial versions of their breadboards from the UK so I luckily dont have to worry about customs/vat etc.
Website: http://www.mroten.dk
Flickr: https://www.flickr.com/photos/ectemnius/
Top

If you are tired of your old rig, you can make a donation to fredlab

(MPE and stackshot include... or not)
I apologise for my poor english
My blog (Macro Micro World)
My gallery
Top

My setup is very similar to yours albeit considerably messier. The main difference I have at the moment is a big concrete slab below the specimen and that does seem to give me rigidity. I've made a custom staging thing which works fine but in terms of a next step I'm looking at replacing the large worktop board with one made of marble. Then drill holes into that and attach all the stuff with nuts and bolts.
My extreme-macro.co.uk site, a learning site. Your comments and input there would be gratefully appreciated.
Top

Do you have any recommendations size wise? I was thinking of a 12"x24" board?

I use one like this (link below). Shipping costs from Singapore were quite reasonable. The seller accepted a conservative offer below the listed price, which equated to very good value. If buying a new one from within the EU, I expect it would be hard to match that price even with customs/VAT applied.
http://www.ebay.com/itm/200730186978


Do you use any feet on your bread boards?

Re: Optical breadboards, is it better to separate?

daemonoropsis wrote:I was wondering if anyone has any experience whether or not its better to place camera mount on one breadboard and subject positioner on another to reduce vibration or if its better to have them on one board?

I would definitely go with both on one board. Otherwise you're vulnerable to flex in whatever they're sitting on, including the sorbothane feet you'll be putting under the board.

I agree with Rik, when everything is well fixed to a single board, any vibration is shared by all components and cancels out in the image. The only exception is caused by flexing of parts of the setup or bouncing by loose parts.

A compromise could be implemented with two optical breadboards lying (directly, not on sorbothane feet) on a single large granite plate. The two breadboards will be kept in place by their weight and will behave like a single stiff object. However, I can see no particular advantage in doing this.

My experience is mainly with vertical setups, rather than horizontal, but the same principles apply. This is why microscope stands are so thick, stiff and heavy.
--ES
Top

Craig: I have actually been looking at that exact board on Ebay, I asked for a shipping quote form the seller last night before seeing your reply:)

Looks like I'll be going with a single breadboard. Thanks to all for the help

If you purchase from that particular seller remember they are open to offers.

It would appear I am the only one to have purchased one of those breadboards and that was in April 2012.

A reasonable offer (from a buyer's perspective) would take a very serious bite out of the shipping costs.

If I were going the optical breadboard route, I would, like you, seriously consider making my own. The savings could pretty easily pay the cost of a buying drill press (which you already have) and taps. Even if you send the finished product out for anodizing, you should save money (and have the satisfaction of working with something you made yourself). You don't even need to drill a full breadboard's worth of holes--just a set of holes in the places you're likely to use them. If you change your mind later, you still have that drill press.

That said, I'm a fan of steel bases, rather than aluminum. And increasingly, I'm moving toward repositionable magnetic bases, rather than screw mounts. Magnetic bases can be both very solid and quickly moveable. The Newport 200 models are excellent, and can be inexpensive on the used market. Lightglass Optics has some, but their price seems high to me.

By the way, I'd strongly echo Rik and Enrico on placing the camera and subject on a single plate for mechanical coupling. But unlike many at this forum, I would avoid mounting lights or light modifiers on this plate. Ideally, these should be decoupled from the subject and camera, to allow easy repositioning of lighting without jostling the image. While you are not likely to be rearranging lights during exposure, it's very nice to be able to try varied lighting approaches without disturbing a delicate specimen that has been carefully posed under high magnification.

Himself wrote:I'm thinking to buy an aluminum plate

Check the tolerance on those bare plates......I made a quick count of the 1/4-20 on my 24" x 18" breadboard...approximately 368....do I use all of them...no....but they are there at a moments notice if I need them and all wonderfully spaced at 1" centers. There are many, many opto-mechanical gizmos and photography related equipment that are right at home on a breadboard, no other connection related accessories required, just a 1/4-20 thread and/or some screws.


Chris S. wrote:You don't even need to drill a full breadboard's worth of holes--just a set of holes in the places you're likely to use them. If you change your mind later, you still have that drill press.

but you have to remove everything on the board to drill extra holes; pre-drilled is the way to go.

That item in Singapore (previously linked in this thread) still appears to be the best available deal on eBay; the one I purchased landed at my door for not much more than the current listed price.

But you have to remove everything on the board to drill extra holes; pre-drilled is the way to go.

Prior to my incorporation of a magnetic base for the camera, I would have needed to remove four screws to clear the steel board for extra drilling. Now it's just one screw--so it's not hard at all to clear the board. Either way was easily adaptable.