I'm going to update my old LED flash for higher power. The old module has 12 Cree LEDs type 9V 400mA. There are 6 channels used for controlling. 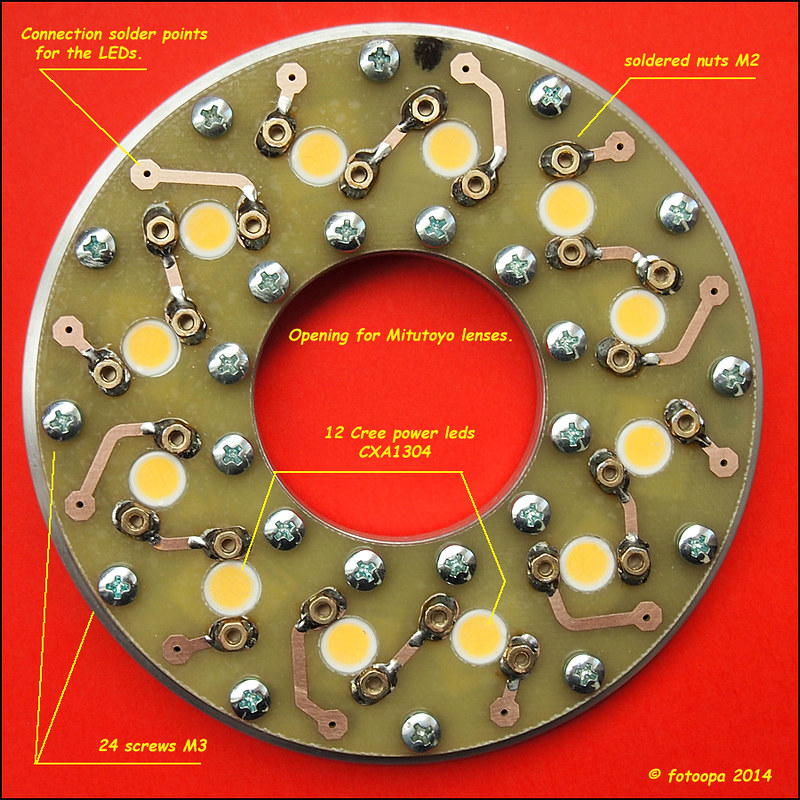 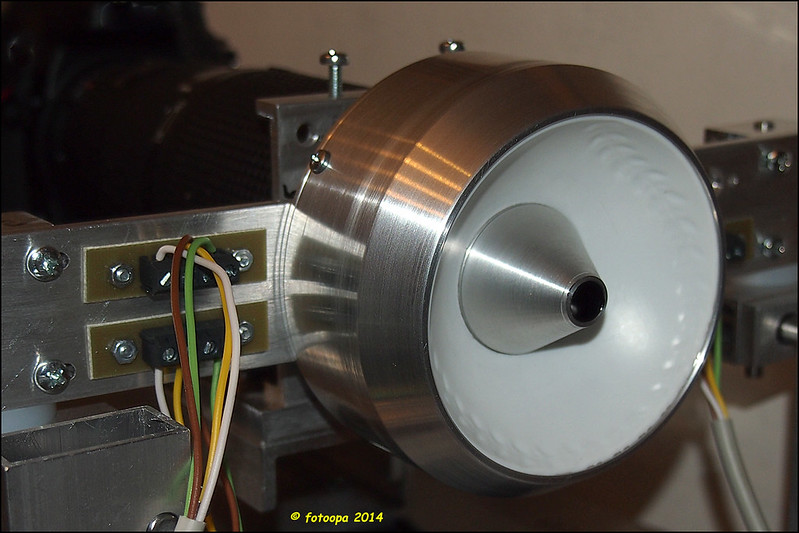 Snout added on my ledflash module PC082720 by Frans, on Flickr


I would like to use the old housing. Only the ring for the LEDs must be remade. Given the LEDs are larger, there is only room for 10 new LEDs. The shape is the CXA 1830: 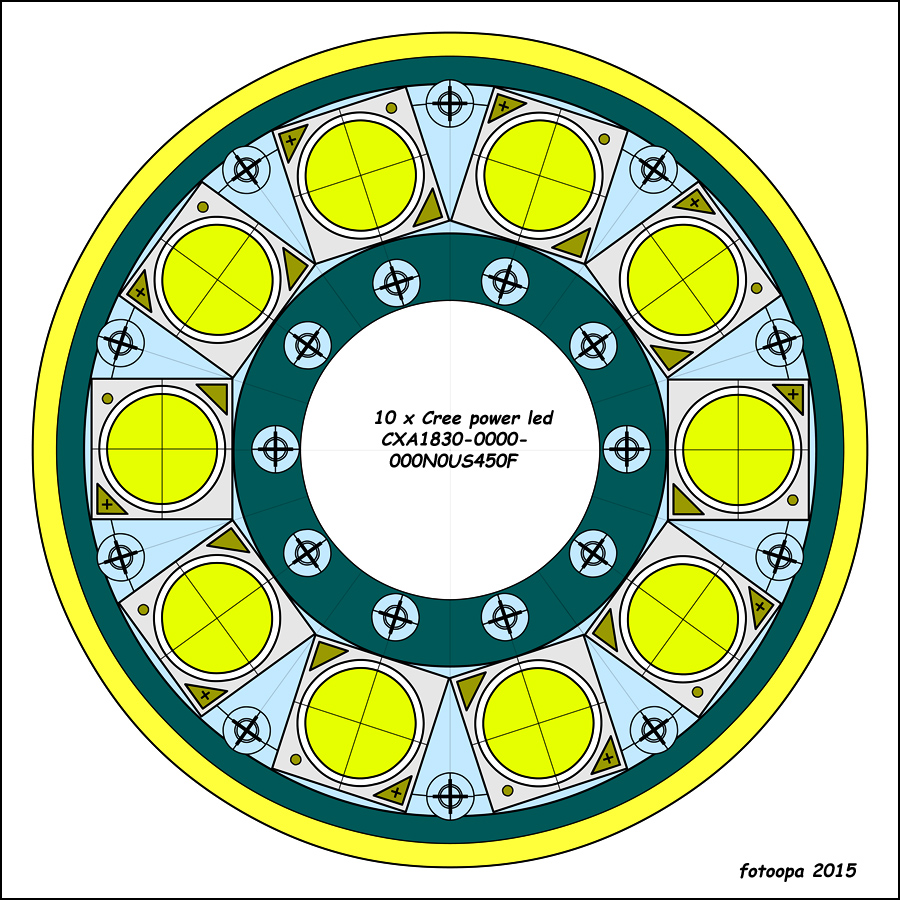 These LEDs are available in different color temperatures. The CRI value is greater than 90, the 3000K version exist with a CRI between 93 and 95. The higher the color temperature the more lumens give the leds. I doubt between 5000K, 4000K and 3000K LEDs. 3000K is slightly more expensive but this does not matter to me. 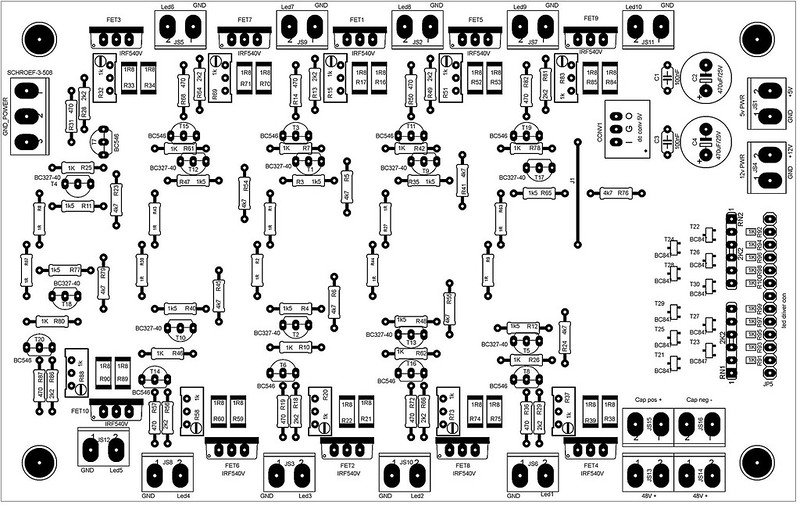 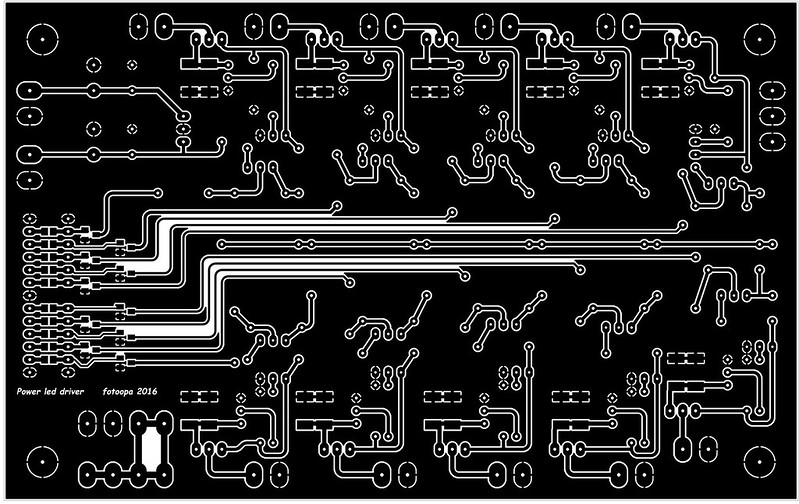 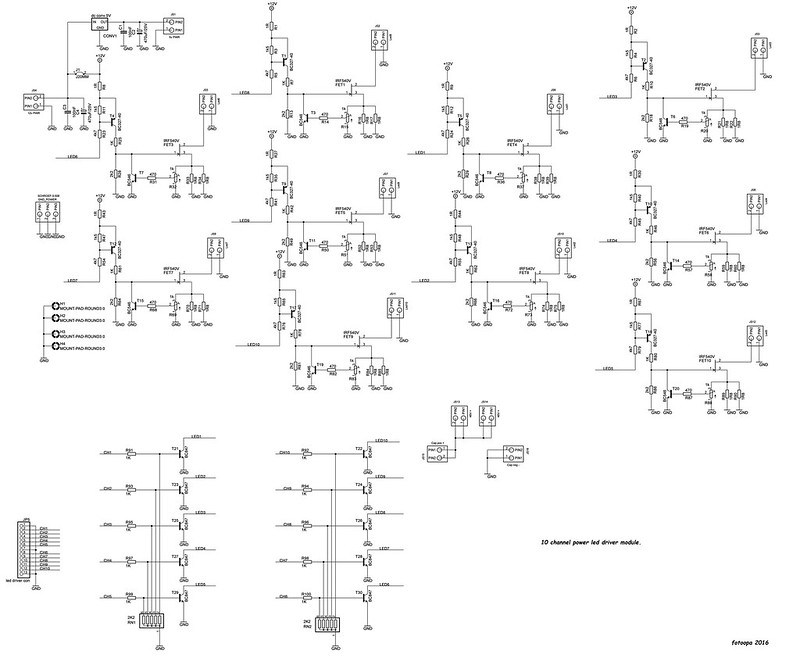 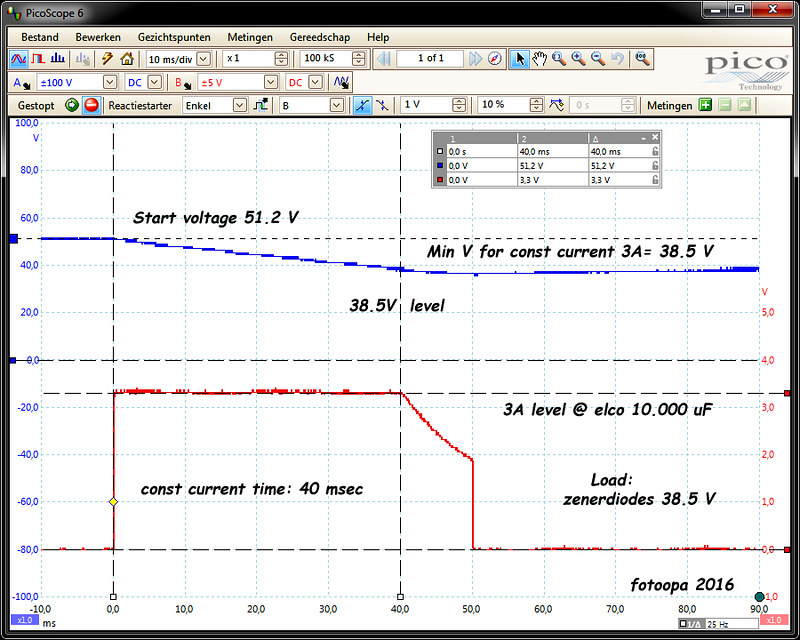 Setup of the test: 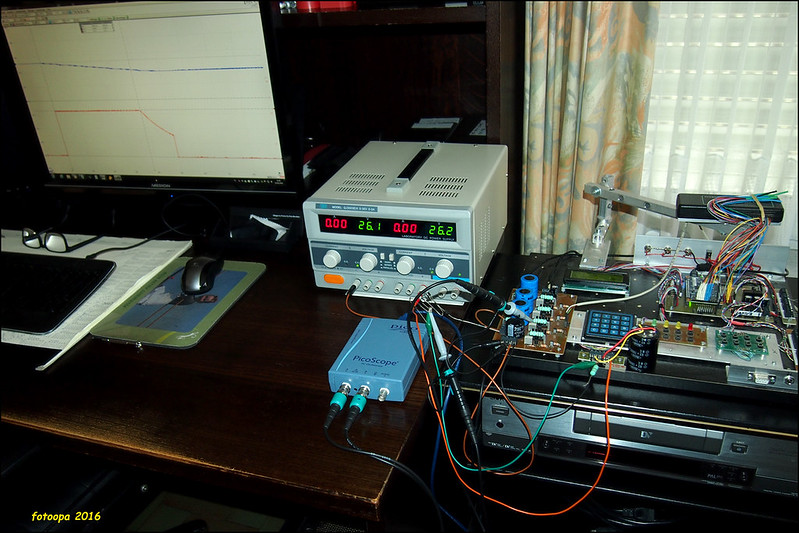 I personally have never had any successfully custom white balance, particularly with my crapy Canon 550D that does not allow color temperature to be entered directly.

But if one shoots in RAW, color temp probably would not matter.
Top

To set the white balance, I have no problem with the D7100. Through the tethering software I can define the white balance and store it in the D7100 preset values. With a gray card this appears quite correct. My current power LEDs have a color temperature of 5000K and a CRI of 90. I shoot always in RAW. Now I read that a high CRI is not everything. A good CRI give no guarantee for perfect color yet.

I would now rather decide to purchase the 4000 K version with CRI min 90. Is slightly cheaper than the 3000K and gives something more lumens. I think there's hardly anyone here on the forum has made a practical compare. In order to purchase both types and comparing it seems to me that too expensive. Tomorrow or at the latest Monday morning I do the ordering of the power LEDs. The LEDs I do not solder, you never know if I can replace them later with other versions (same shape).
Top

cool, I know it is me who can not do custom WB right :-) So when it comes doing custom WB, I just change to RAW. As matter of fact, I think I am going to shoot in RAW -- my studio strobes do not seem to give me the same color temp as speed lights, like Canon 580EXII or YN560

There is quite some work. The unit comes in my darkroom space this is 5 meters from the main controller. A SPI protocol line will send data and commands to the flash unit CPLD: 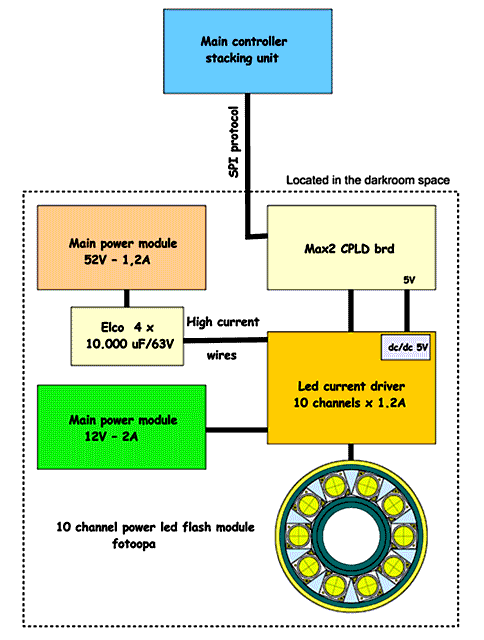 But I'm working on it.

I like 485 bus and you can always replace/interface with it with wireless module available off the shelf, reliable and cheap.
Top

No problem, I use twisted pair cable with terminating resistors and never wireless. I've never had any problems with signals up to 1 MHz clock. I would take RS485 for industrial use because this is indeed better. Another solution is with 50 ohm drivers. Start signal for the flash is via a separate direct connection.
Top

Thanks, as always, for your fascinating post. I wait to read them until I have time to do so slowly and carefully. This is always worth it.


fotoopa wrote:I would now rather decide to purchase the 4000 K version with CRI min 90. Is slightly cheaper than the 3000K and gives something more lumens. I think there's hardly anyone here on the forum has made a practical compare.

With a subject that contains bright red-channel information and dim blue-channel information (a not-uncommon situation), I often get more noise than I want in the blue channel. In such a case, if I turn my illuminators’ dimmer switches up to full voltage, the higher-color-temperature light (which of course increases the proportion of blue light to red light), I get a less-noisy blue channel, and a resultantly better picture. So my sense is that for subjects with a lot of contrast between the color channels, it might be useful to have a range of color temperatures of light available. And of course, one could probably do much the same by placing a color filter over the light, then backing out its effect using the color channels in Photoshop. This is something I haven’t gotten around to trying, yet. But since in my experience, a noisy blue color channel is a more frequent occurrence than a noisy red or green channel, I’d lean toward the highest color temperature LEDs, which contain the most blue light.

The 5000 K 2990 lumen Cree LEDs you reference are quite interesting to me. These seem bright enough that I might consider modifying my Halogen illuminators to switch out the EKE bulbs for Cree LEDs. This would probably let me run the exhaust fan much more slowly, and switch from solenoid shutters to electronic gating.

mjkzz wrote:I personally have never had any successfully custom white balance, particularly with my crappy Canon 550D that does not allow color temperature to be entered directly.

fotoopa wrote:To set the white balance, I have no problem with the D7100. Through the tethering software I can define the white balance and store it in the D7100 preset values. With a gray card this appears quite correct.

mjkzz wrote:cool, I know it is me who cannot do custom WB right :-)

Mjkzz: I, like Frans, also use a Nikon D7100 for studio macro, and find it easy to set custom white balance. I’ve found it even easier with my other Nikon bodies. I don’t bother with automated custom WB. I simply take pictures of a white card and look at the three-channel histogram of the results. I adjust the color temperature in camera or in tethering software, until the red, green, and blue histograms' peaks are right on top of one another. This is quick, simple, and has always worked.


mjkzz wrote:But if one shoots in RAW, color temp probably would not matter.

Agreed that color temp won’t matter inasmuch as it can be adjusted in raw conversion. But would suggest that color temp of light (not camera settings) may matter in terms of getting lowest-noise images.

Thanks Chris for the comprehensive and detailed explanation. I now think even more about the choice of the color temperature of the LEDs. Especially considering my current LEDs used have also 5000K. At that time ( Sep 2014) the price was quite high and the power a lot smaller. Now you have much more power for the same price and more types.

I've just taken an overview of the Cree specs:

Regrettable there are only diagrams with a CRI of 70 at the high temperature versions. But you can see clearly increase to the blue. The LEDs I'm going to order a bit later and first finish the PCB's. The SPI connection I'm going to replace possibly. Then I would not need the local CPLD and the control would occur directly from the current existing controller via a cable with 10 twisted pair wires over a distance of 5m. I will first have to test those signals with scope and logic analyzer. Only the high power section of the control would be in the darkroom. Within a few weeks I can decide if I take the 5000K or 4000K LED version.

You're right, that's a better solution. In my old stock, I found the RS422 driver - receivers type MC3487 and MC3486. So with 3 pieces each, I have to 12 differential RS422 lines. Thus, the outputs of my FPGA lines shall have a nice buffer to the outside and the speed is very good. The CPLD chip is no longer needed in the darkroom space. This saves me the verilog code for the SPI driver. All programming remains on the stack controller side box.

Thanks for the usefull idea!
Top

Thanks for posting the spectra graph, this is was I was referring to in the PM. Despite the higher 3000K CRI I find that the main difference is blue mitigation (not always desirable and a bigger amount of red towards the far end but the main issue with LEDs still remains: the valley in the cyan - green zone. I don't see the increased amount of far red of much utility, I think that the 4000K spectrum is more equilibrated in green-yellow wavelengths, but my opinion is more speculative than based on experience.
Pau
Top

Thanks Chris.S, I think I just never sat down and try to do custom WB with all of my attention. I did a smaller ring and a panel flash with 90+ CRI and color temperature of 2700K-3200K LEDs, tried to do custom WB, but eventually I simply went to RAW and adjusted pix in Light Room. But I do agree with you, maybe 2700K - 3200K is too warm and need a little more blue.

Frans, that sounds great, glad you got some ICs in your stock drawer :-) I am looking forward seeing your results, always amazed by your pix over Flickr.
Top

I was looking to add a second ring SMD green leds, 10 pieces in series as one channel, mechanically it would go. But I do not see how to solder them. There are green LEDs having about 180 lumen/piece @3.65V and a size of less than 4mm. So 10 leds give arround 1500-2000 lumen extra into this zone which is very expensive and complex in order to achieve. First I will make adjustments to my PCB for the rs422 receivers, so there's more time to make the choice for the right LED temperature.


mjkzz wrote:Frans, that sounds great, glad you got some ICs in your stock drawer :-)

I think there are about 1000 pieces of various kinds from the years 1980-2000. Especially TTL, ALS, S, HC and HCT versions and just about anything for Motorola CPU's and peripheral chips, memory and EPROM's. Most of it is outdated but occasionally still usable.
Top

I have decided my choice type led temperature. It will be five pieces at 5000K and 5 pieces at 3000 K. They will be alternately mounted. Thus I have the choice of a group of 3000K, 5000 K and a mix of both. I will make into the camera 3 presets for white balance. This way I can judge the impact of the color temperature of the LEDs. Consequently, there will be 5 or 10 LEDs used at a time. I've tested this with the existing version with 6 channels. The brightness distribution remains perfectly maintained with only 3 leds, only the time needed is the double. With five channels it will be even better distributed. I see that the price of 3000K version in the meantime is pretty dropped.

Meanwhile, all new PCBs are designed and ready to etch. The technical drawings are also ready for the 10 LED holder. The list of components is now being prepared and will be ordered this week.

The following is still a lot of work, especially 3 to 4 weeks. Grandchildren also come a week vacation, I can not work during that week. As soon as parts are finished, the photos will be online.
Top

Sounds like an excellent choice--elegant, and potentially a nice step forward that the rest of us can copy. I enthusiastically look forward to your reports.