I'm searching for info on mounting a DSLR on a drill press. I've decided that scanning my old film negatives with a flatbed scanner is just too slow. Also, others have reported results can be superior to consumer level equipment such as Epson V700 and Canon 8800, if done properly.

I've looked at copy stands but you need to spend several hundred dollars to achieve a stable mount of larger DSLRs. And I already have a nice Jet drill press.

I've started searching on B&H photo for some kind of adapter, but not sure what to look for.

Any assistance would be greatly appreciated.

It's not that hard to make a suitable support system.
A video of an early version of my scanner is: https://www.youtube.com/watch?v=gmRHTausFls

We scan film at 1:1 magnification. For 35mm and a full-frame camera, you can do this in a single shot, assuming you have a high quality lens. We want to scan larger film, and that requires precision movement and stitching, but that's unnecessary for 35mm.
www.peterdesmidt.com/blog
Top

Mike, welcome to the forum!

I have to say that while using a drill press as a copy stand seems clever, the thought of doing so makes alarm bells ring in my head. I highly doubt that any device to permit this is available off the shelf. On the other hand, building a camera mount for a drill press' chuck strikes me as an easy project for my fabricator. One obvious necessity would be a safety tether--perhaps looped over the top of the drill press--to reduce the risk of disaster if the chuck were loosened. And it would of course be vital that the machine never be accidentally spun up when the camera is attached. For me, that would require unplugging the drill press before attaching the camera. Honestly, the whole concept makes me cringe.

Is scanning negatives the only use you have for such a project? What formats are your negatives? There likely much better ways of going about this, as Peter said. I recently purchased a Nikon PS-6 film-copying attachment for my Nikon PB-6 bellows, even though I have a very good, dedicated Nikon film scanner. I'm interested in seeing if today's high-pixel-density, high-dynamic-range cameras let me do things more quickly, easily, and effectively than with the film scanner (though my film scanner is the equal of the drum scanner I've tested it against, and is quite capable of resolving Kodachrome film grains). In particular, I'm interested in focus-stacking curved, mounted slides, and perhaps doing moderate HDR to optimize details in shadow areas of Kodachrome slides. My film scanner will let me do these things, but very slowly.

In a direct answer to your question--even though I'm not personally comfortable with the idea: To mount a camera on a drill press, I'd put an Arca-style bracket on the camera (all my camera bodies have Arca-style L-brackets, but an Arca-style bottom bracket would suffice here). I'd buy an Arca-style clamp to grip it with. Then I'd have my fabricator make me something to go between the Arca clamp and the drill chuck. Ideally, you'd want the center of gravity to be directly under the chuck, so you'd introduce a few bends into the fabricated gizmo. Also, you'd want some adjustability for alignment purposes. The cheapest way to obtain this depends on what gear you already have--ball heads, gimbal heads, etc.

Wow. Thanks Chris and Peter for the prompt and detailed responses. That NC stuff is awesome but unnecessary for my task. I'm scanning mostly 35mm negatives and slides and some old Kodak instamatic film (110). I haven't completely settled on the camera but I'm thinking of Canon 100d with a Canon EF-S 60mm macro.

Chris, don't worry I won't plug in the drill press. I think I found some Manfrotto studs that should fit the 5/8" chuck on my drill press. I already have a right angle gizmo for attaching the camera.

You probably already know about outfits like ScanCafe, but I'll plug them anyway. ScanCafe does a really good job of scanning film, and does it for a very low price. If one doesn't need to scan large format, or need something esoteric like focus-stacking or HDR, it's hard to argue against sending the film to them and letting them do the work. My parents recently sent hundreds of images to ScanCafe, and received excellent results. Many of these images were 6x6cm medium format, which my film scanner won't handle. But some of them were 35mm slides, which I could have done. ScanCafe's price was something like 33 cents per scan, and the company sent my folks a coupon for 25 percent off. No way was I willing to scan these myself to save that sort of money, even though I have an automatic slide feeder for my film scanner. Even with such automation, by the time one sprays the slide to remove dust, bends the mount to reduce curvature, places it in correct alignment in the automatic feeder, hits the "go" button, does something else for a while, then reviews each scan for focus, exposure, existence (automatic feeds sometimes jam, so some slides may not have been scanned at all), much time is spent. Then one must dust spot the outputs and crop them by hand (film is rarely in perfect register, so I scan a bit overlarge so as not to miss anything). If ScanCafe will do all this for 33 cents, let them! (Admittedly, when I scan, I save as tiff, which is an upcharge at ScanCafe--but still. . . .) I estimate that I spend, on average, 20 minutes of work per slide. By this metric, ScanCafe is working for a dollar and hour--not rate of pay I care to compete with.

For my Sunday best, I sometimes rescan images that require multiple focus points for curved film, or a second exposure for the shadows--and blend the results. These, I'd find it difficult or impossible to outsource. So I do my own scans when quality is an issue--but never for price.

As you have a collection of film shots, you may recall the era when many of us used Kodachrome 25 whenever possible (for the younger among us, that's ISO 25--hard to use, but unequaled for quality), and tended to rate it at ISO 32 to preserve the highlights (again for the younger set, this means we underexposed this film by 1/3). As we knew, chromes thus-exposed often worked best for prints and magazine work. In my scanning experience, such chromes often require HDR techniques to reproduce well. If outfits like ScanCafe did this kind of thing for a pittance, I'd send my chromes to them immediately, rather than look into better ways of doing it myself. But they don't.

The 110 film format was chiefly used in non-adjustable cameras designed for people who just wanted to push a button and preserve a memory--not people who obsessed over photographic details in search of every scintilla of quality. If I had a bunch of this sort of film images to scan, I'd send them to ScanCafe in a heartbeat.

I checked out ScanCafe. Looks like the best one out there. Thanks. However, I'm a bit of a do it yourselfer. Also, it starts getting spendy when you add in Tiff (.24) and hires (.14). Others have reported 30sec/scan with great results, which I'm going after. If I can just get decent scans into Photoshop I'm golden. They have great automation and batch utilities as well autostitching.
Top

Why would you mount the camera in the chuck? I would suggest mounting it to the quill instead. Surely you don't want the camera to spin? Mounting to the quill will give you up/down movement without spinning. With a little bit of luck you may be able to find a lens tripod mount that fits the quill.

Clearly you're more knowledgable about drill presses than me. I needed to download the Jet manual and parts list to even learn what the quill is. I wasn't planning on turning the unit on, just lowering the table manually.

As the Manfrotto stud I was planning to use in the chuck isn't really designed for that, I'm very interested in learning more about your idea. I don't really know any of the quill details. What kind of tripod mount should I look for? My drill press is a Jet JDP-17MF.
Top

Just above the chuck most drill presses i have seen have a cylindrical part that moves up and down with the chuck but does not spin. Sometimes a safety shield is mounted on there (it was on mine). That was the part I suggest might fit a lens tripod ring. Looking at pictures of the Jet press you have it looks like a depth stop is connected here. So you would need to disconnect that. 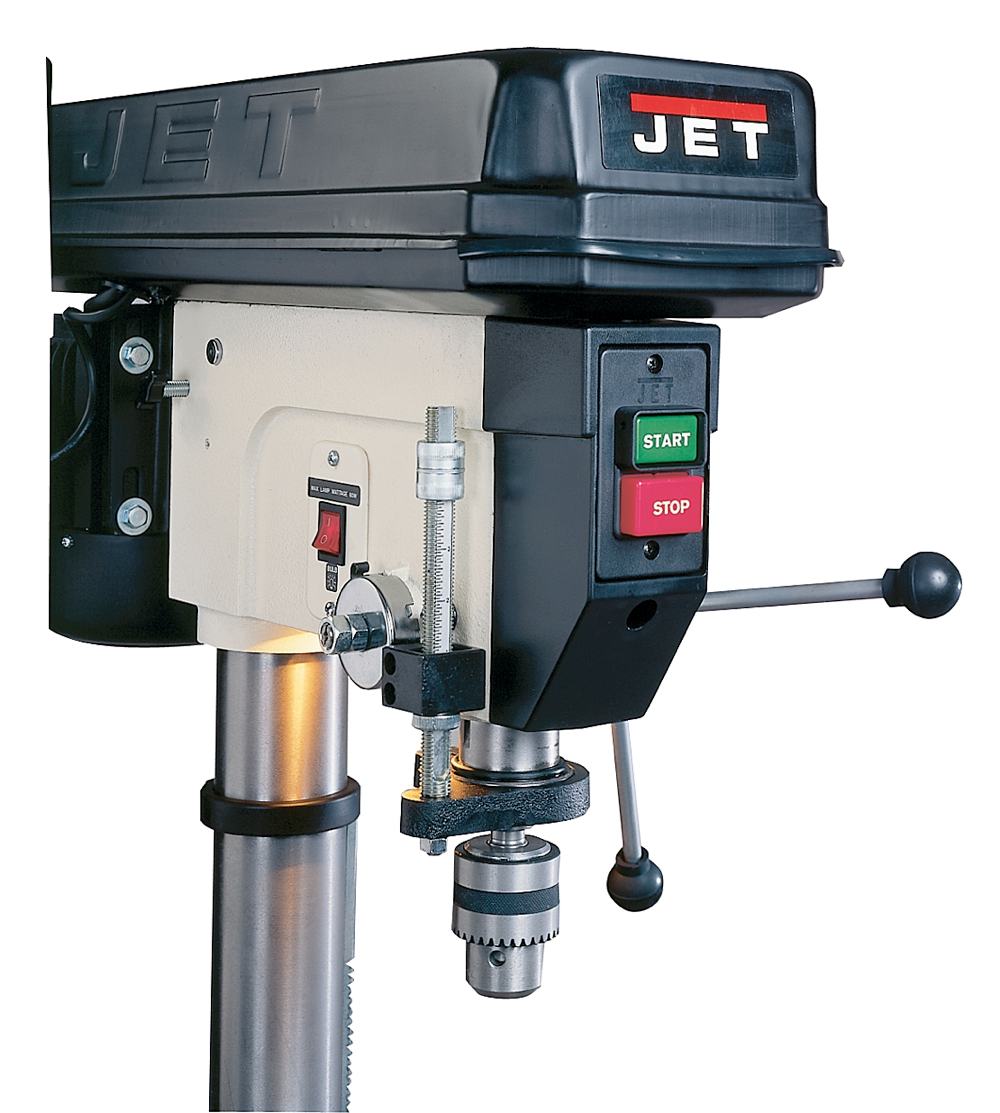 Another way would be to leave it in place and connect an angled bracket for the camera to the bottom part of the depth stop. That would allow you to use your drill press as a drill press also

The vertical adjustments, both on the table and on the chuck, will be very coarse, and film, digital cameras and dust don't play well together. I keep my camera equipment out of my wood shop, and I'd never change lenses in there if I did have to take a picture of something.

If you're just doing 35mm film, why not use a Nikon PB-4 (or similar) with a slide duplicator attachment, as mentioned above? I have one, and it's high quality.
www.peterdesmidt.com/blog
Top

Got it. Thanks Bo.

Peter, I appreciate your comments about dust. I worked for a while on a wafer vision system in a clean room (1 to 25 micron sized objects). I haven't done any wood work in my garage for quite a while.