Any method to direct mount the stackshot rail to aluminum breadboard? The bolt pattern does not match. 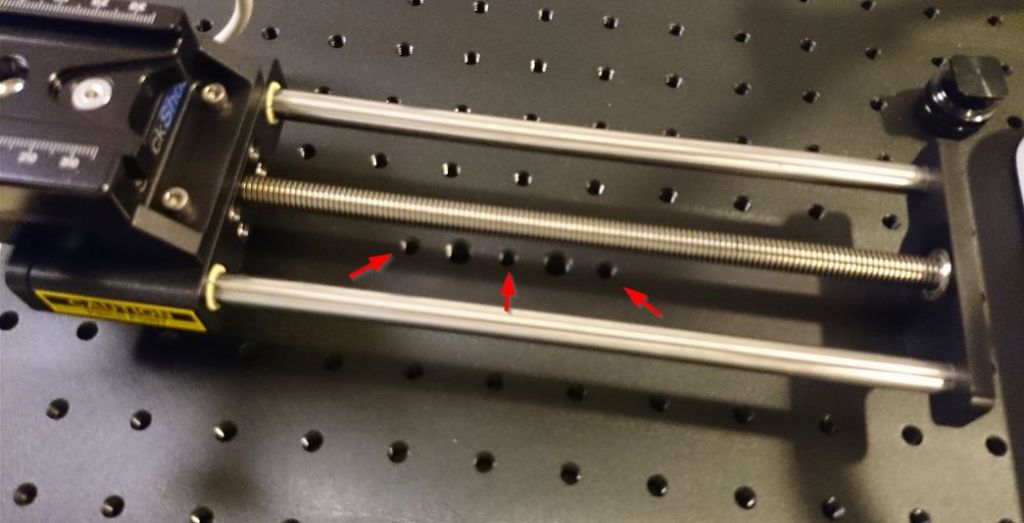 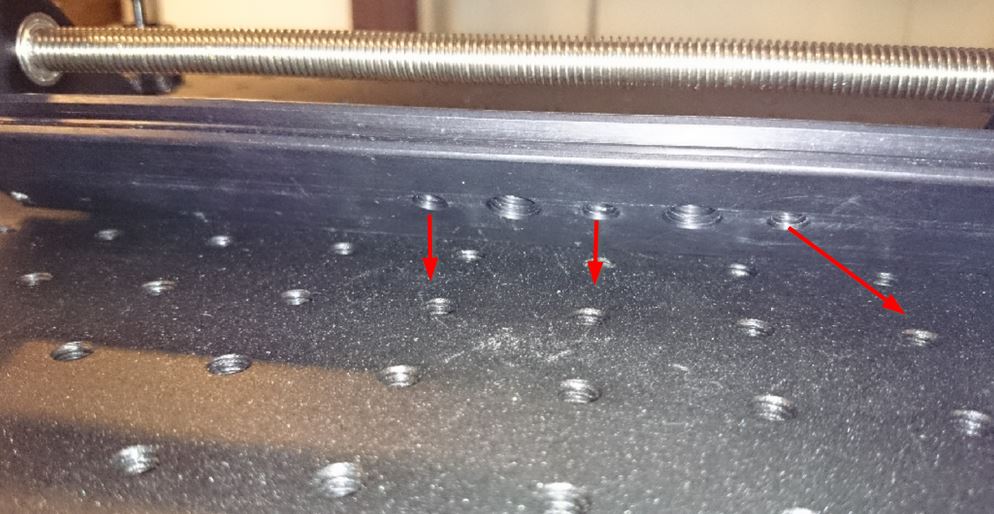 Note that even if the holes in the Stackshot rail and breadboard matched, you'd still have a problem: Both holes are threaded. Running a bolt through two threaded holes usually raises issues--you typically want to attach a non-threaded ("through-bored") hole to a threaded one.

A number of ways of attaching the two come to mind if you have access to a drill and tap (a device for adding threads to a hole in metal), or can find someone who will do it for you.

The first is to add a few additional holes to the StackShot rail. The holes should line up with holes on the breadboard, and be unthreaded. Adding a "counterbore" at the top of the hole would be a nice addition, as it would let you recess the head of the screw.

Alternatively, you could add some holes to the breadboard, tap them, and bore out the threads in some of the StackShot's holes--but I would not be inclined to do that.

Another way, which would minimize alterations to either your breadboard or StackShot, would be to make an adapter plate to go between them.

The best approach, in my mind, would not be to mount the StackShot rail on the breadboard "directly," but to take advantage of the fact that the rail is dovetailed to fit into Arca-Swiss style clamps. You could purchase a pair of small AS clamps, or a single large AS clamp, bolt them to the breadboard, and clamp your StackShot rail in them.

Good, inexpensive AS-type clamps are available from Chris Hejnar, SunwayFoto, ProMediaGear, and others. Do note that many of them will need a bit of clearance from the breadboard to leave room for their tightening knob or lever, so you might well need to make a simple riser block (in this case, a small strip of metal with some holes in it for the bolts to go through). And with many clamps, you will need to remove threading from the mounting holes (it's easy to do this with a drill), or drill some additional holes in the clamp.

Thanks Chris S, I will try using AS type Clamp suggestion and let you know the result later.

Did you have success mounting your Stackshot on the breadboard? I have the exact same problem!

Did you have success mounting your Stackshot on the breadboard? I have the exact same problem!

As Chris mentioned, just get one or two Arca-Swiss style clamps, attach them to your breadboard & your problem is solved.

I picked up a extruded rail from Thor Labs, they sell them in different lengths. The rail bolts directly to the base. Thor sells plates that attach to the rail, I used one plate with Stack Shot attached to the plate and another plate where the subject positioners (two cheap focus rails) were attached.

This arrangement allows you to slide the camera/lens/Stackshot assembly on one plate attached to the rail, and the subject with its' positioners on the other plate, both slide on the same axis which helps somewhat with alignment.

Thanks everyone - Arca clamps on order! I have picked up two for just over £10 each. The problem is they are coming from China and there is a holiday there right now!

I have a temporary fix though. I have used two 5mm bolts to fix the Stackshot directly to the board. Downside to this is that the rail is fixed, whereas the A/S clamps will allow lateral movement and for it to be easily removed!
Top
Post Reply Previous topicNext topic
8 posts • Page 1 of 1