Could someone please advise on the following Nikon objective specs
1. What is the difference between M Plan and N Plan
2. Are all M and N Plan CF as it is not always stated on the barrel
3. A typical spec includes numbers for tube length 160 or 210/0 what does the 0 mean

The zero means no coverslip. On biologically oriented scopes you will see
"160/0.17" where the 0.17 refers to the thickness of the cover slip the lens expects to work through.

Someone else will have to answer the other questions.

Thanks very much Gene, that answers question 3 specifically, hopefully someone will know the rest.

gypsey wrote: 2. Are all M and N Plan CF as it is not always stated on the barrel

The full name of the N Plans is "CF N Plan", so yes, all N Plans are CF.
However, the objectives are not marked "CF" or "CF N" on the barrel, so they're not that easy to identify.

Moreover, while the "M" stands for Metallurgical, like Gene said, the "N" refers to the second-generation of Nikon's CF objectives, so both designations are not mutually exclusive.

Your best bet at identifying an objective is by comparing the picture and the spec to those of a well-known specimen, or by looking at a brochure and spec sheet.

For instance, taking the example of an objective that's often mentioned here, Nikon made at least two versions of their biological finite CF 10x Plan objective: the earlier "CF Plan 10x" and the latter "CF N Plan 10x". Both have just "Plan 10x" engraved on them. How to tell one from the other? The earlier has an N.A. of 0.25, the latter of 0.30. The earlier has one knuckled ring, the latter has three.

It gets even worse when it comes to M Plans because Nikon wasn't the only manufacturer to use the "M" designation for their metallurgical (reflected light, no cover glass) objectives.

Search the forum, you'll find a couple of links to the brochures of the "CF N Plan" biological objectives and the "CF M Plan" metallurgical ones.

Nikon also made a series of second-generation metallurgical "CF M Plans" ("CF N M Plans" maybe?) with the distinctive three knuckled rings, but I have been unable to find a brochure for those, and have seldom seen them for sale online. They must have been in production for a short time, having been replaced by the metallurgical CF infinity objectives, which are not marked as "M".

If you find this confusing you should stay well away from Zeiss gear.

Regarding question 2. Not all M and N Plan Nikon objectives are CF and not many Nikon finite objectives are specifically marked as CF. I don't think I have any finite CF objectives that have CF actually written on the barrel.

Gene has answered questions 1 and 3 and while writing this post I noticed PauloM has also responded.

Nikon finite N Plan objectives are used on biological orientated scopes and are usually marked 160/ to indicate tube length. If there is a number after the '/', that refers to coverglass thickness (not much of a concern for lower power objectives when used for macro).

There are also additional specs, such as LWD, ELWD and SLWD. These specifications refer to working distance, greater working distance usually comes at the expense of some resolving power.i.e. lower NA (numerical aperture)

Specific information requests regarding finite Nikon CF objectives are often placed on the forum. We have spoken before about having some reference images of the objectives that we know are good for macro and which various members are using.

I'll photograph my little bunch of CF objectives tommorrow and upload for ID. You get to recognise CF objectives before long, they have certain external characteristics.

Thank you Paulo M and Craig

Within the limits of what is possible without a specific objective to comment on it would be fair to say that my original questions have been answered.

It is obviously a potentially confusing area, I will keep away from Zeiss, and it is necessary to satisfy oneself exactly what is being offered on an auction. When one has had no experience of a product and no one tp speak to personally the resource of this forum is invaluable.
As I belive that the objectives that we are talking about are no longer made, I have ben unable to locate relevant brochures or spec sheets .
I will have another search through the forum for links.
I look forward to seeing your 'little bunch of CF objectives' Craig.

This is good. For some reason I just haven't been able to get my head around these lens options.

If you do a forum search- Charles Krebs has very kindly posted a link to a .pdf that shows the Nikon CF /160 lenses . It is a great reference when doing thingbay.whatever where the literal descriptions are wanting.

Early on in the investigation of this photomicrography stuff - I quickly picked up on the fact that if you don't have a research grant or trust fund - patience/research/tinkering and more patience plus some more research/tinkering and patience seem to have been the companions of folks like Charles and Rik and others that have made this stuff work at an accessible level. The fact that they share that journey - mostly here- is generous beyond the call. 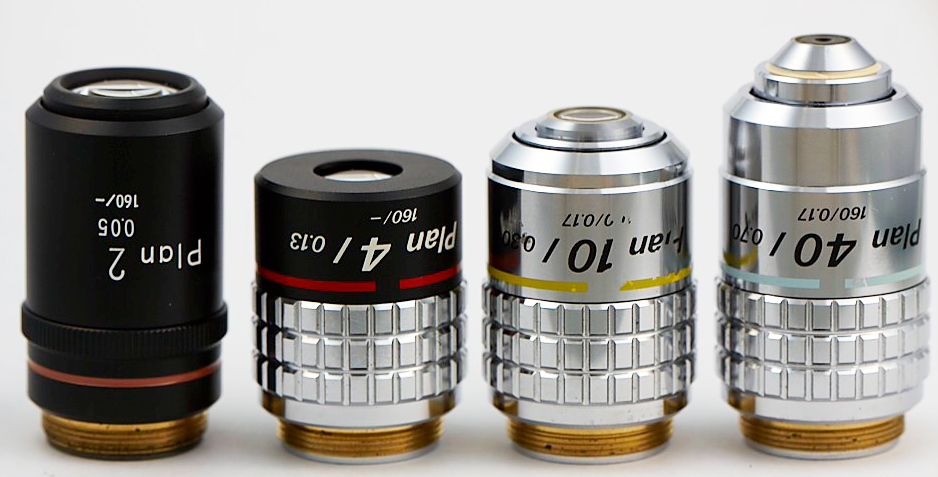 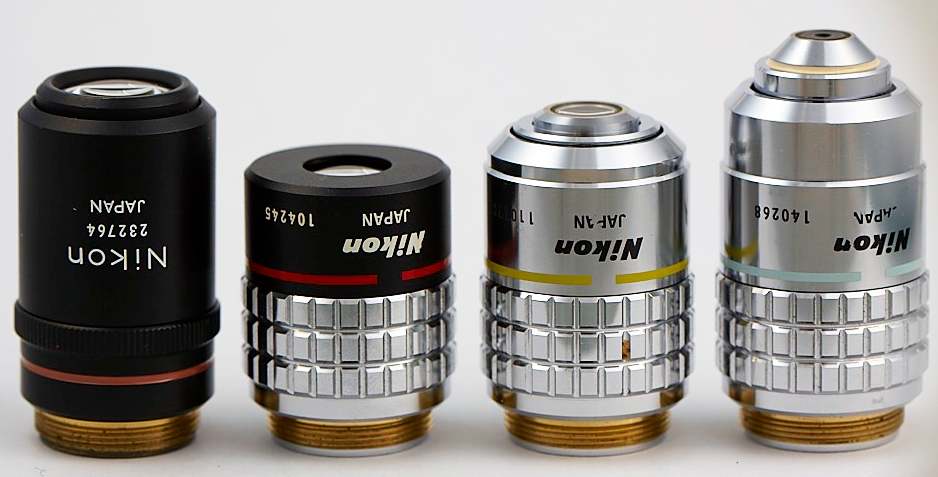 Here are the 'M' Plan Nikon CF objectives that I own. (all RMS threads)

These objectives and those in my previous post are all finite objectives.

I have just added a 20x BD Plan 210/0 to my small collection, but don't have it on hand to photograph.

I thought initially that I was asking a fairly simple question, and although that may be correct, I find that there are no easy answers. There is a common expression in South Africa 'ja..nee/maybe' which means its a fact/maybe.
Nevertheless to get down to brass tacks, the information provided, particularly the CF brochure link from Charles Krebs and the images uploaded by Craig, thank you, enable me to eliminate a considerable number of items that previously I may have wasted time looking at.
When considering personal requirements, I think it is important to take into account what one is trying to achieve, is it a good and acceptable photograph or is it a highly detailed scientific image. I have seen several comments from experienced contributors who when comparing different objectives say that there is no important observable difference in the end result, I assume that means when looked at from a photographic perspective rather than a scientific one.
So I am reasonably happy that I can now decide on the basic specification for an objective to suit my immediate needs. There is always the question of condition, both from use and original manufacture which is a bit of a lottery.
The question of WD seems to be very important, when it comes to stacking subjects that have any significant depth, so unless one has the time and other resources to build up a collection to cover many sets of conditions, it would appear that for a 10X a good WD of 5 mm or more is desirable. The advantage of this is that it eliminates a large number of otherwise potential candidates.

Craig Gerard wrote:( the dark-barrelled 2x is yet to be confirmed as CF)

That objective in indeed a CF. First generation, so not CF N. It did co-exist with the CF N series for a while, since it's pictured on the CF N brochure I have and there is it clearly labeled as "CF Plan 2x". I guess the CF N Plan (and the CF N Plan Apo) 2x were launched some time after the rest of the CF N objectives.
Last edited by PauloM on Sun Aug 29, 2010 2:52 pm, edited 2 times in total.
Top

What a lovely gaggle of objectives.

Probably worth mentioning that the 10X M Plan you picture is a MI (Michelson Interference) objective and not that often seen. It has a slightly different barrel style. The "regular" Nikon CF M Plan has a barrel style that looks just like the 20X and 40X pictured.
http://www.krebsmicro.com
Top
Post Reply Previous topicNext topic
27 posts