Epi DIC on Mitutoyos with a Nikon slider

Epi DIC on Mitutoyos with a Nikon slider

I've been working on this for a while, but I finally got epi DIC set up on my microscope. Though transmitted DIC is much more popular and sought after, epi DIC is great for looking at crystal surface textures and can be used on mineral inclusions as well in some cases, and I've long been impressed with the results that Nathan Renfro (@microworldofgems on instagram)
I'd tried four other DIC systems trying to find something that would give decent photos with my mitutoyo objectives--first an Olympus BH2, then two different finite Optiphot DIC nosepieces and a Bausch and Lomb balplan (that last one I didn't actually try with the mitutoyos, it was just really cheap and I was curious)--plus a couple of Leitz fixed prisms just in case. These all worked, with the Olympus ones giving the best color with mitutoyos, but also all had the same issue (even when used with the correct objectives): objectionable image doubling. Here's an example picture of the surface of a diamond crystal taken on the Olympus system: 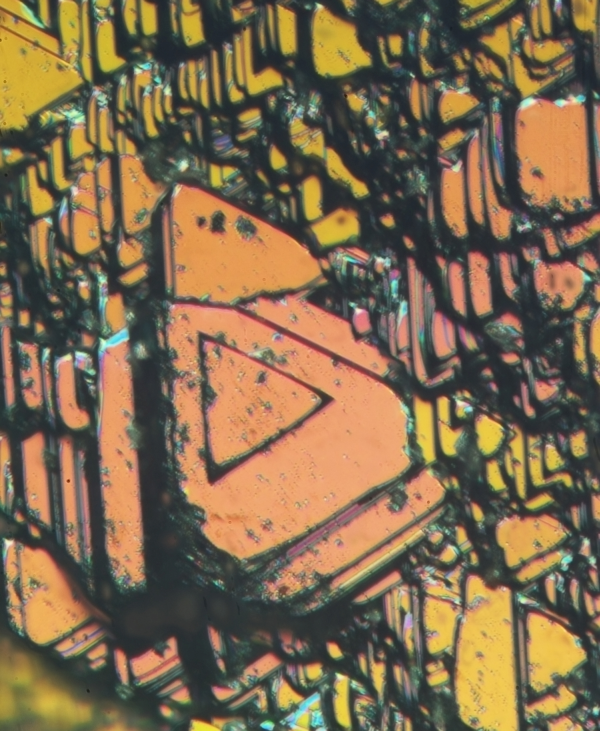 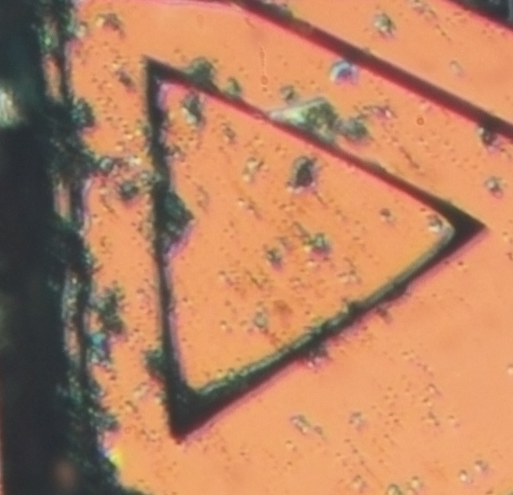 Juuuust enough to ruin the pictures for me, at least on any subject with fine details or acute angles (like a crystal surface). Each of those I tried seemed to give about the same degree of doubling. This is an issue that makes sense with DIC, since you're essentially splitting and recombining the image, but I also knew better results were possible since I'd seen Nathan's pictures. I have one of his prints on my wall and when I get my nose up to it I can see a hint of doubling but that's it. His were taken on a Zeiss universal.
Mitutoyo does have a DIC option for their finescope line, but it doesn't look like a very elegant system, with each slider rated for one or two objectives but with only a single slot under the illuminator rather than one above each objective on the nosepiece. Anyway, I've only seen one prism for saleused and it was expensive.
So anyway, I had almost given up hope when a unicorn appeared on eBay: a Nikon eclipse L-DIC slider at a potentially affordable price. This is the one used on their current industrial microscopes. My offer on it was accepted, but actually mounting it proved to be an interesting challenge (skip the next paragraph and a half to avoid boring mechanical details). I use a Nikon UM-2 measurescope which takes optiphot style Nikon nosepieces, but I needed an Eclipse nosepiece with a slot for the DIC slider. Fortunately I was able to find a Nikon eclipse head/nosepiece holder mislabeled on eBay for a good price, and had a custom part machined to mount it to my UM2, then 3d printed a sleeve to get my optiphot illuminator to fit (the infinity optiphot illuminators have a smaller optiphot-sized male dovetail at the bottom and a larger eclipse-sized female dovetail at the top). I still need to improve this part as the centration isn't 100% perfect but it's close enough for now.
Actually getting a nosepiece with a DIC slider was another challenge--the generic BF/DF eclipse nosepiece looks like it has a slot but if you remove the cover what's behind it is the side of the darkfield stop. I spent a while looking for one of the nosepieces intended for DIC but they're scarce and expensive, with the cheapest one on eBay coming in at 600 bucks. So instead I got an extra bf/df nosepiece and removed the darkfield stop. Once that's removed there is a slot, but it's just a little too small for the slider, tapering from 23.8 at the top to 23.2ish at the bottom. I assume that they use the same part but machine it out on the DIC variant. Anyway, I have a dremel and time so I was able to widen it out enough to accept the slider: 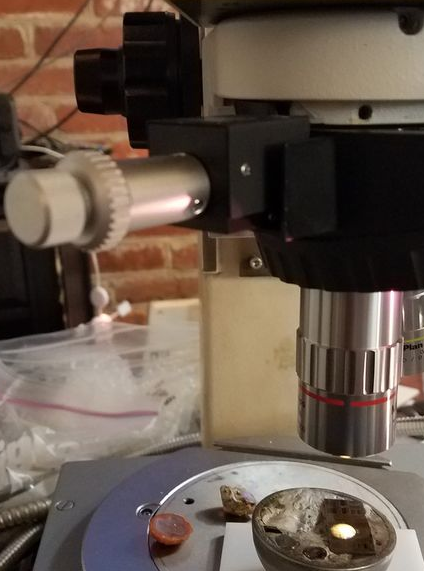 Anyway, it was a pretty involved process to get it mounted, and I finally got to try it out. The results were worth it, with almost no doubling and really nice, bright colors. It even works with the mitutoyo 2x objective! Here are a few example images taken of quartz crystal surfaces (note the specks aren't dust, they're little pits on the surface). 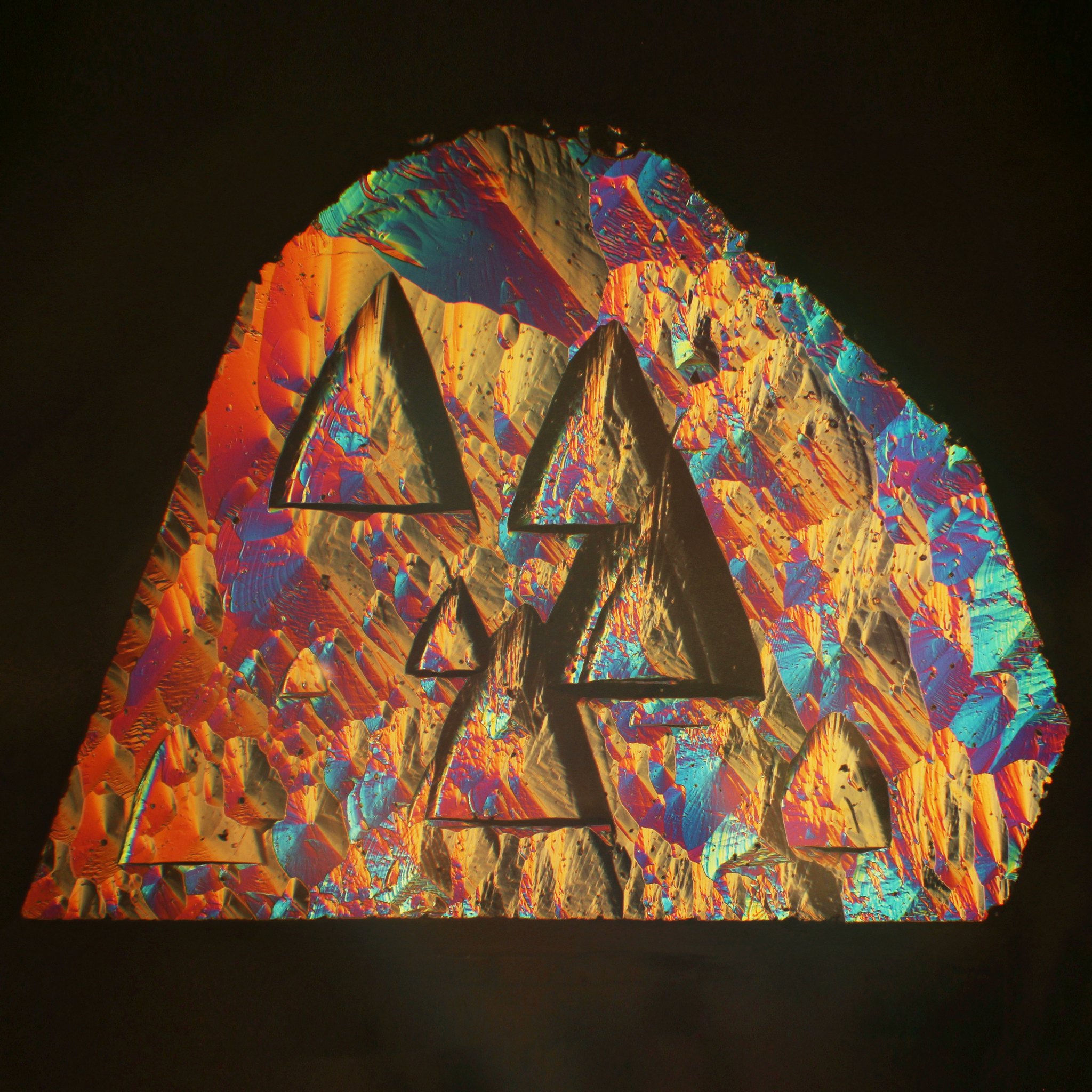 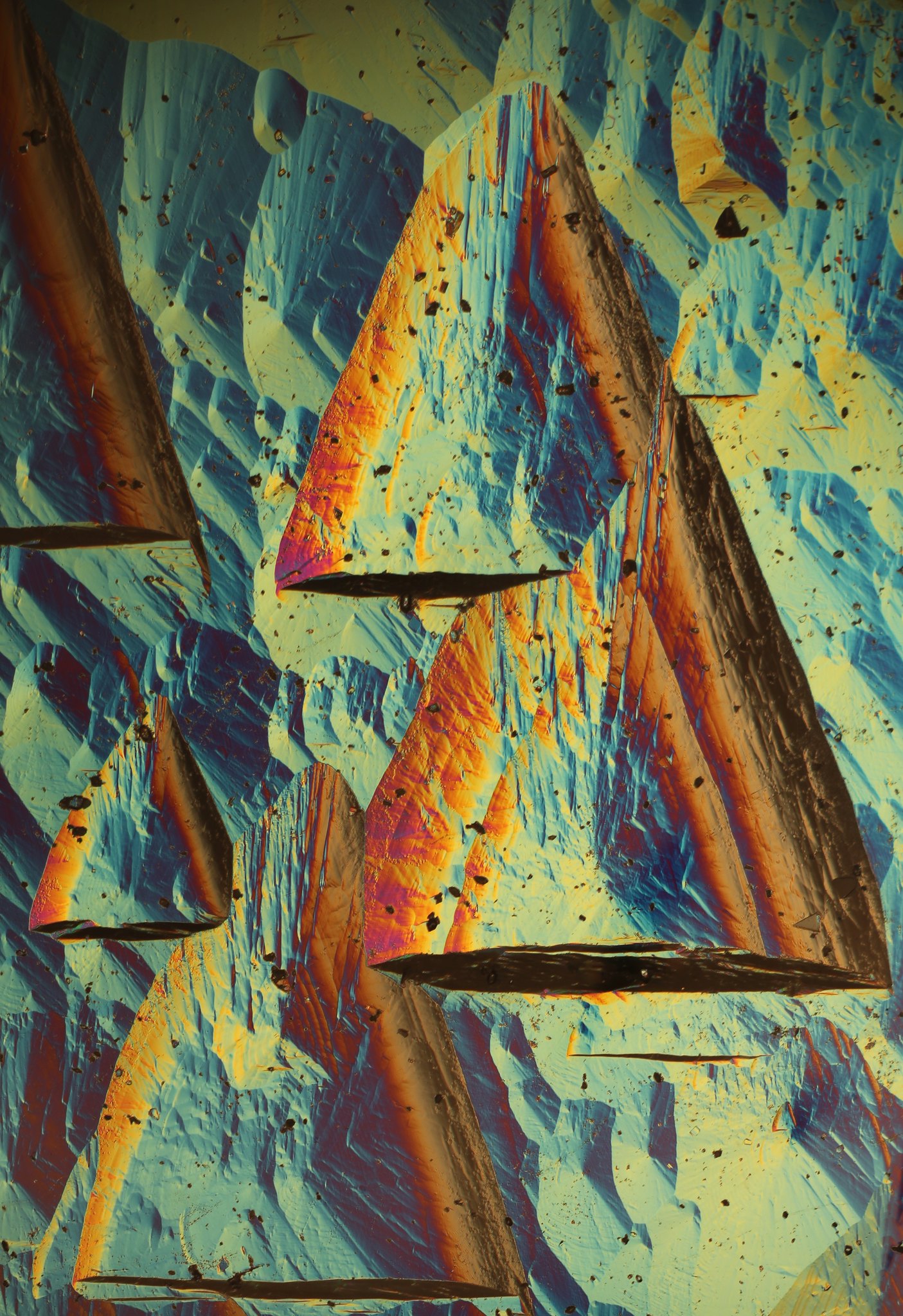 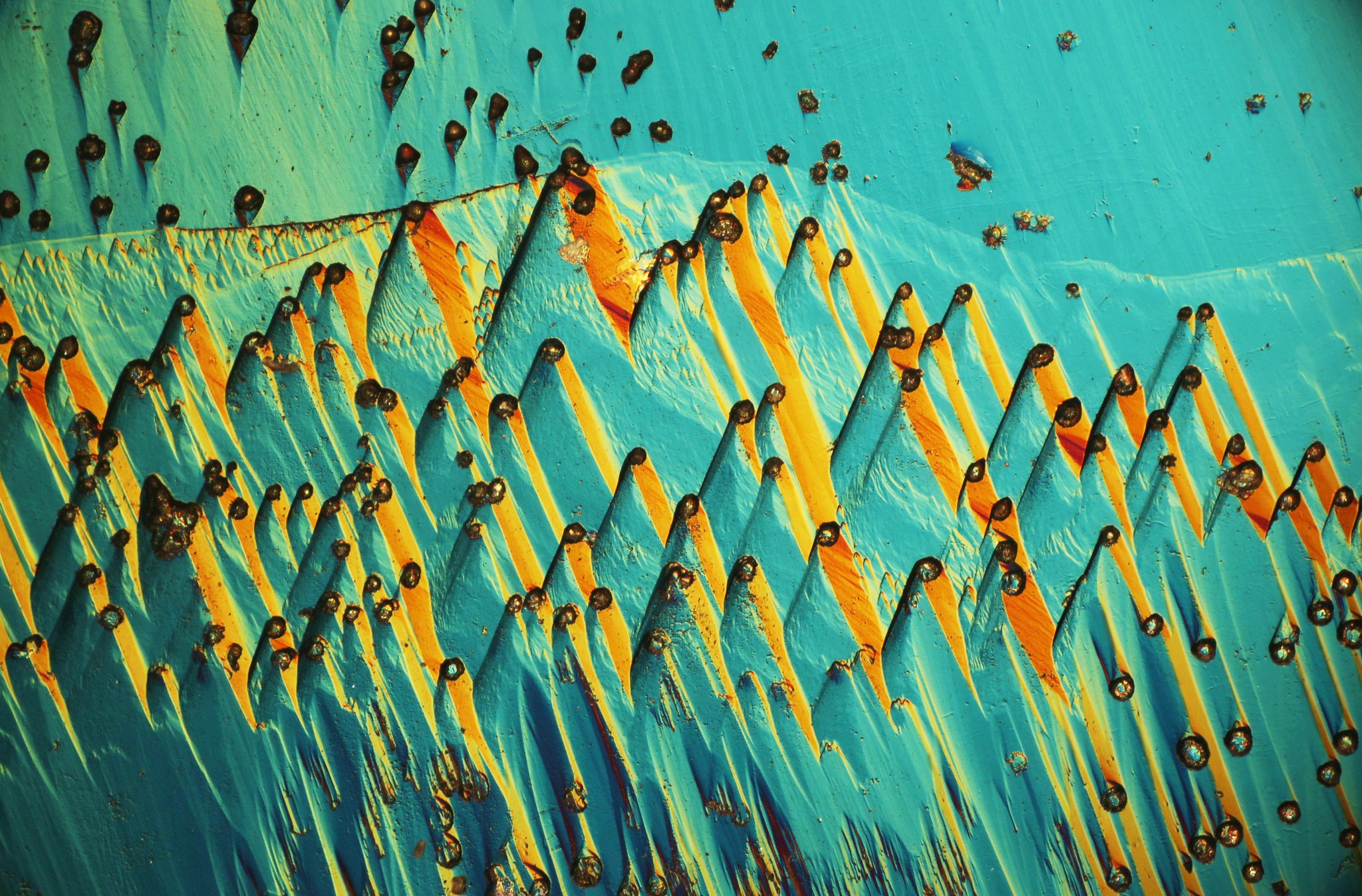 Quartz crystal surface DIC by Stephen Challener, on Flickr
This could get addictive. I've only tried it with my 2x, 5x, 10x and 20x mitutoyo so far, but I'm hopeful it will work with others as well. It has vertical and horizontal adjustments which I imagine will help a bit with compatibility (which generally does seem to be much more forgiving with epi DIC than transmitted). Overall I couldn't be happier with how this worked out.
Top

These are spectacular, and what an improvement over the initial attempts. Congratulations on wrestling with the problems until you had solved them.
Lou Jost
www.ecomingafoundation.wordpress.com
www.loujost.com
Top

Excellent results!
I assume that you have a proper epiilluminator with its polarizers, do you?
Would be nice to see the details of the whole R DIC setup
Pau
Top

Whoops, sorry I forgot to actually respond here!
Here's a picture of the whole thing, taken from a low angle so you don't see my super cluttered table. 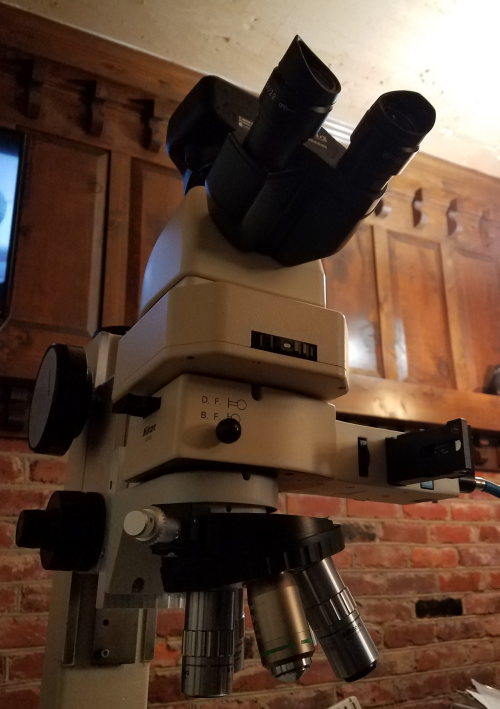 Assembling the illuminator was its own whole thing. I'm using a Nikon infinity optiphot illuminator, but it came off of a surface profiler so it was equipped only with a brightfield prism, an empty slider where the analyzer should go and a green filter where the polarizer should be. They'd also put a custom plug end onto the lamp house. The appropriate analyzer and rotating polarizer are sporadically available but at outrageous prices. I found a reasonably priced analyzer, or rather another empty slider someone had glued an appropriately-sized polarizer into. The hot glue had failed which was OK because it wasn't aligned right anyway--I used a finite optiphot analyzer as reference for alignment and fortunately they are the same. I started working on a 3d printed rotatable polarizer, but I have a lot to learn about gears and belt drives and as such it was slow going. Finally I spotted an auction come up for a motorized polarizer plus quarter wave plate which I recognized as likely Nikon (confirmed by measurements from the seller), which I was the only bid on. I removed the motor and added a knob to make it manual. The glue on the quarter wave plate had also partially failed but I got that glued back in (though I haven't ended up using it much, it usually makes the colors in xpol and dic feel less natural to me). I couldn't figure out what the plug on the lamp house was so I 3d printed an adapter to use a fiber optic light source which has worked well enough. 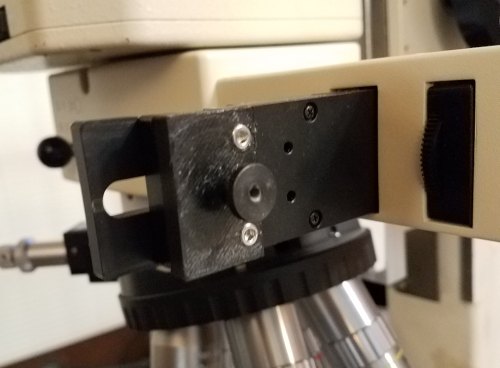 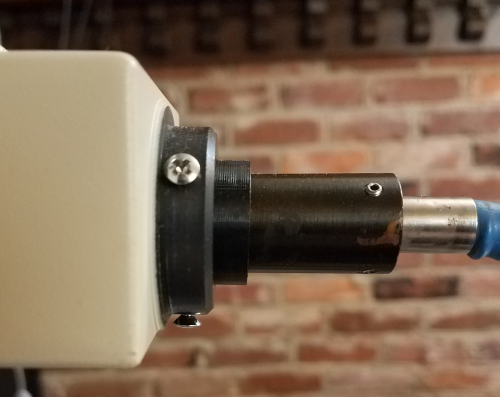 Between the head and illuminator I have a mag changer. It does 0.62x, 1x (no lens) 1.25x and 2x. The 0.62x doesn't vignette on aps-c if the objectives are close below it, but does badly with the illuminator and extra nosepiece distance, so it's mostly just good for eyepiece scanning on my setup. I need to do some tests on it without all the extra space to see if it would be good as an addition to a more traditional extreme setup, I just haven't gotten to it yet.
Top

Hey Excellent, thanks for sharing the setup and results.

Very interesting project with really nice results, I would love to use the mitutoyos with DIC. I may try the PZO DIC with them once I get the adapters I need, it may even work ..
http://www.flickriver.com/photos/seta666/
www.macrosmuymacros.com
Top
Post Reply Previous topicNext topic
6 posts • Page 1 of 1