It looks like there's some sort of fine powder adhering to the edge, flaking a bit? What I thought were longitudinal cracks in the metal, are edges of the flakes, I think. Perhaps it's polishing material.
Chris R
Top

Well I definitely see the problem. <g> When cutting designs in the 18 lb paper, I use the 'point' 98% of the time, the rest of the scalpel blade rarely gets used. Below are pic(s) of the 'point' of a new and used scalpel blade. The 'bottom' (in the images) are the cutting edges. The last image below is what the overall #11 scalpel blade looks like (at least this brand). 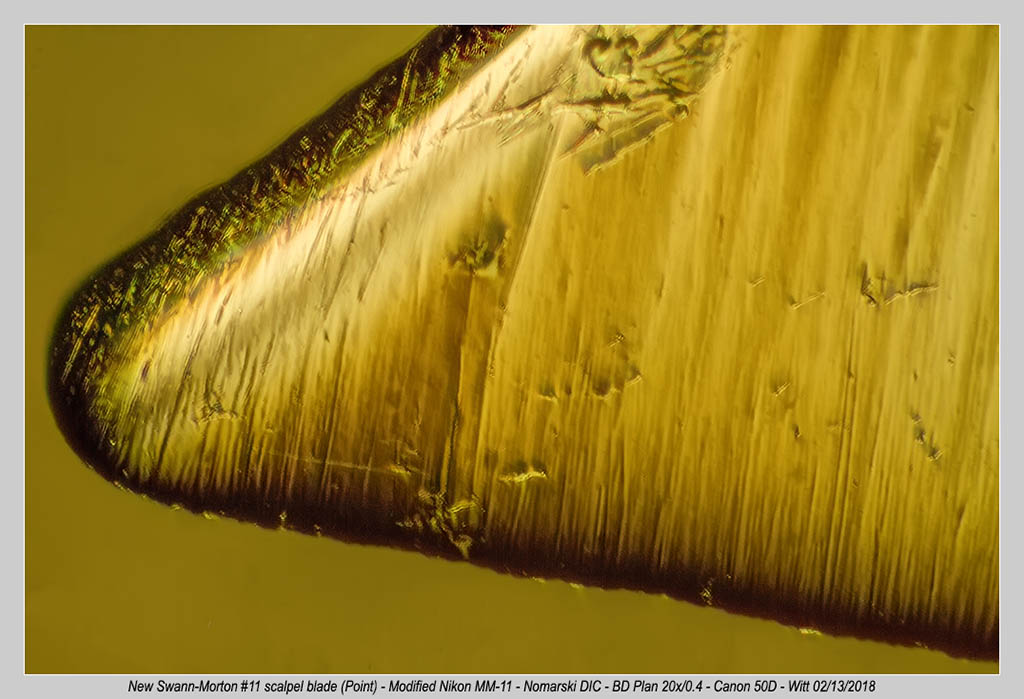 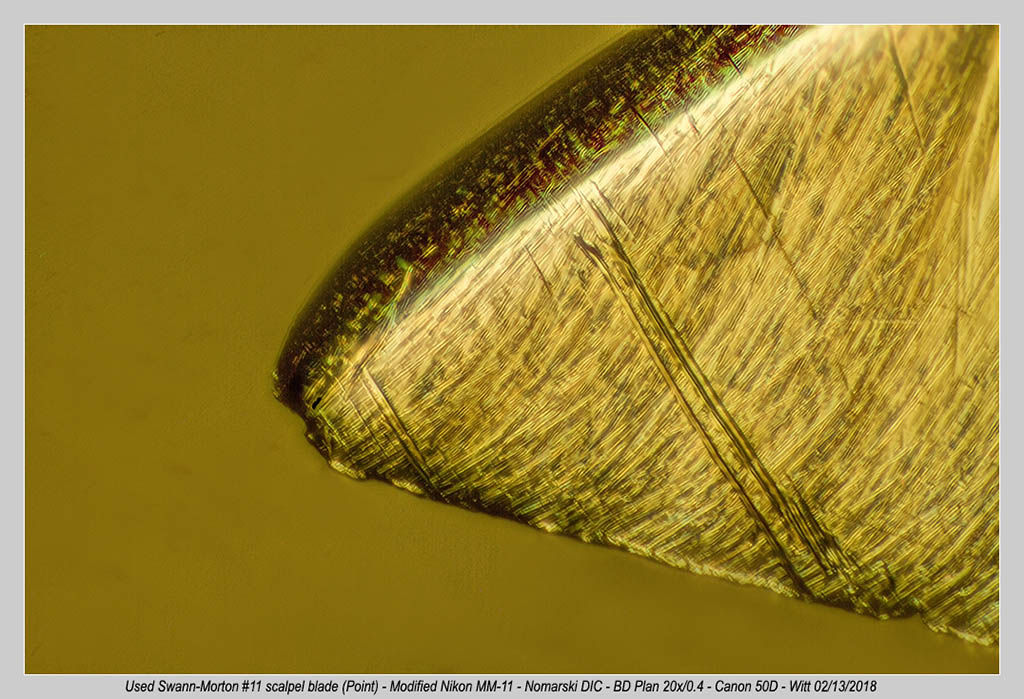 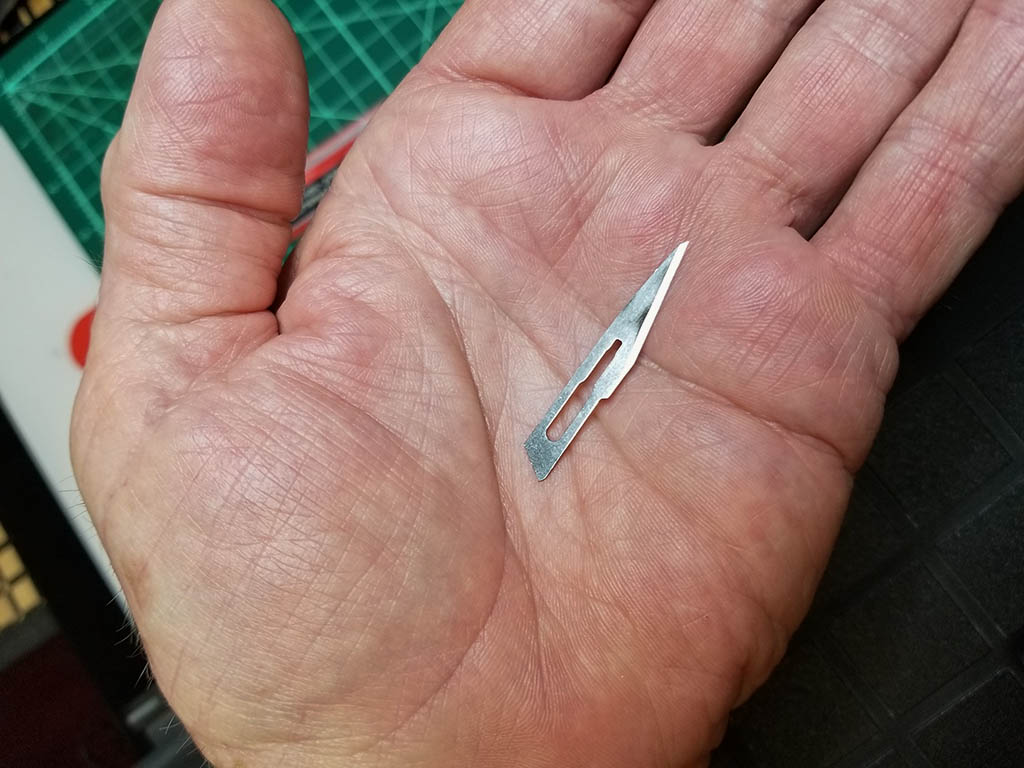 I wonder whether one could lap the edge of a razor blade to remove the bumps and nicks?

I have some gauge blocks, and they are usually lapped flat to optical flatness levels, i.e., you can confirm that they are flat using an optical flat. The resulting surface is flat to sub-micron levels. The gauge blocks themselves are not suitable for use as an edge target because they are too thick, and their corners have been chamfered.

But my thinking is that if you can lap the surface of a gauge block flat, then surely you can lap the edge of a razor blade flat by holding the blade perpendicularly to the lap. With some fine diamond abrasive you could obtain a mirror finish on that edge, so the edge should be quite smooth (for a mirror finish) and quite straight (from the flatness of the lap).

I do not have a ready-made lap, and it takes a bit of effort to make a set of three, but I can certainly give it a try with a "something that resembles a cast-iron lap" and some diamond paste. (it will have to wait until the weekend, though).

I will also have to see whether I can get enough magnification to really see the razor edge properly --- the best I can do is about 2.6x magnification with a reverse-mounted lens, which is probably not enough ...

Re: Would lapping help?

fvdbergh wrote:I wonder whether one could lap the edge of a razor blade to remove the bumps and nicks? Any thoughts?

Dunno about a razor blade but I'm sure it can be done with the proper fixture. The whole point of this microscope experiment was to "see" if I can sharpen the 'blades I use' instead of throwing them away. If I throw away 50 plus blades per cutting 'maybe' I can re-sharpen them and only use one blade for an entire cutting session. The non-scalpel blades are only about 2 to 3 cents each but the scalpel blades are about 27 cents each. Of course they last longer but I want to re-sharpen them.

Around 15 or so years ago I purchased a Edge Pro Professional knife sharpening kit from edgeproinc.com (I was a knife collector for many years). So I called Ben at EdgePro about sharpening ideas for my scalpel blades. The procedure seems to be working. I'm just trying to quantify it and come up with a consistent procedure. I've been using 2000 to 6000 grit semiconductor polishing tape mounted on a aluminum backing plate which are then used with the Edge Pro system.

Re: Would lapping help?

Dunno if you know anything about hand engraving (like done on a rifle, pistol, jewelry etc.)? Steve Lindsay (and a lot of DIY'ers) make fixtures to hold a cutting tool at precise angles to profile the edges of their cutting tools. The point being if a fixture can be made to easily hold a razor blade I'm sure they can be honed even sharper.

BTW, Steve has some 'amazing' videos on his site. 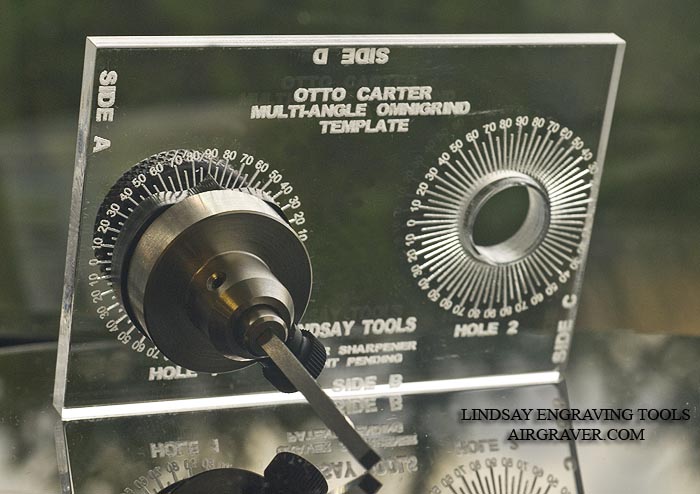 I'm not much of a video person as far as shooting video but I do know how to edit video using Vegas Pro. I thought I'd make a quick simple short video using my GH3 and using the #11 scalpel blade as the subject just for kicks.

Those stacks seem to have severe movement errors, as if the subject moved several times during the stack. Maybe I am wrong and the blade really has those parallel lines. It would be easy to check by looking at a single image.
Lou Jost
www.ecomingafoundation.wordpress.com
www.loujost.com
Top

Lou Jost wrote:Those stacks seem to have severe movement errors, as if the subject moved several times during the stack. Maybe I am wrong and the blade really has those parallel lines. It would be easy to check by looking at a single image.

Dunno, most of you folks are the experts here, I'm simply a neophyte, if that. My setup seems rock solid but I haven't tested it. Seems I screw up daily with this hobby from lack of knowledge. If you looked at the video ABOVE you can see the lines. Of course I didn't adjust the focus in the video. Here's a single image from a stack of 70 or so images. 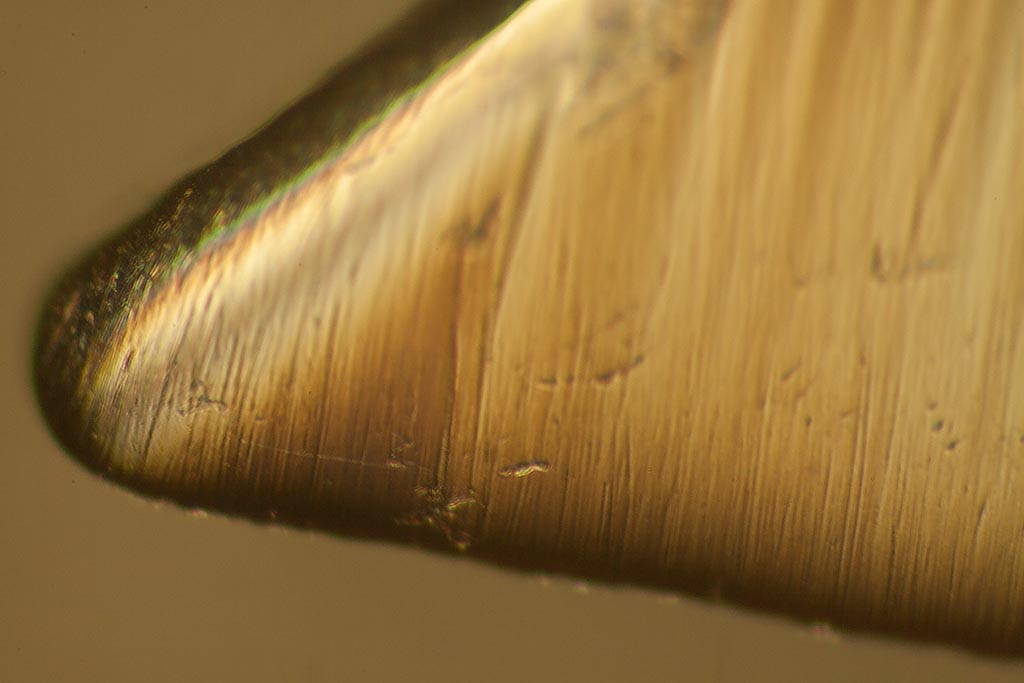 Well, I don't know. I suppose even a single image might have doubled lines if the movement is due to mirror or shutter bounce. The "Used Swann-Morton #11" is the one that looks most suspicious. If you look at it in magnified Live View, do you see those doubled lines?
Lou Jost
www.ecomingafoundation.wordpress.com
www.loujost.com
Top

Lou Jost wrote:Well, I don't know. I suppose even a single image might have doubled lines if the movement is due to mirror or shutter bounce. The "Used Swann-Morton #11" is the one that looks most suspicious. If you look at it in magnified Live View, do you see those doubled lines?

I see what you mean. I didn't think a Canon 50D had shutter vibration, that's why I bought a few. <g> I can't physically verify that sorry. I threw the dull blade back in the box with a few hundred other dull blades. I know it was one I tried to sharpen with the 6000 grit semiconductor tape, maybe that's where all the fine scratches came from, or maybe the MM-11's fine focus was drifting again, dunno. Here's a single shot of the stack in question. 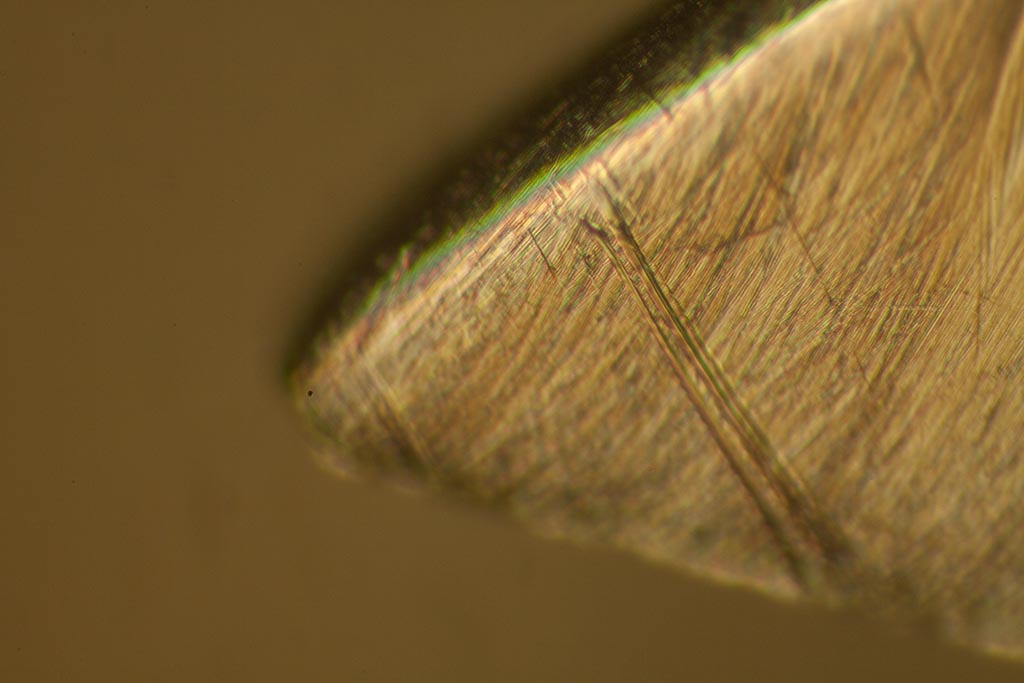 Lou Jost wrote:Those stacks seem to have severe movement errors, as if the subject moved several times during the stack. Maybe I am wrong and the blade really has those parallel lines. It would be easy to check by looking at a single image.

I agree that the images look like there is feature duplication due to subject movement. But the single image also shows some apparent duplication: 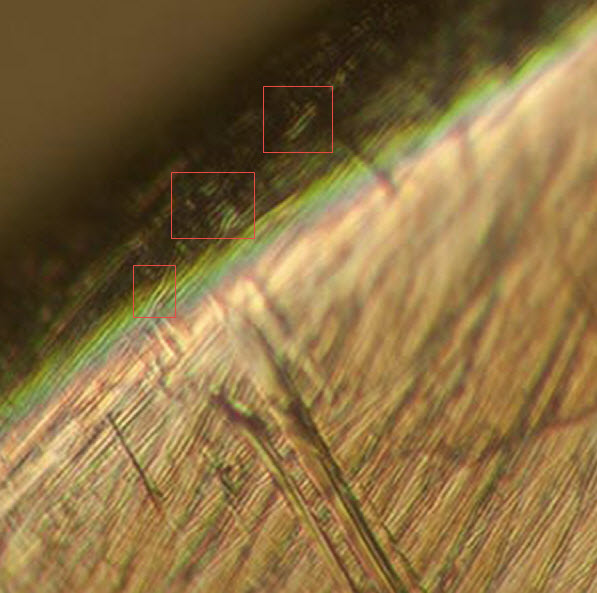 I don't know for sure what's going on here.

The features could actually be doubled, in the sense that if you plow a furrow, you get two raised edges that can both reflect light.

Another possibility is that these are not actually parallel features on the subject, but rather single features that become apparently doubled due to properties of the illumination system, especially when the features are nominally out of focus.

Seeing the stacked result alone, I was inclined to suspect that the doubling was introduced during stacking, either by movement or by having the computational alignment process get misled by overall shifts in the brightness patterns as focus changes. (DIC is notorious for being difficult to stack.) But seeing the single frame, I am now think the other possibilities are more likely.

Yes, the single frame shows some of those same features....it is rather curious!
Lou Jost
www.ecomingafoundation.wordpress.com
www.loujost.com
Top

Here is another (like different one) dulled #11 scalpel blade that I tried to sharpen with 3000 grit semiconductor tape. The tape is mounted on a machined aluminum block. It too had a chip out of the tip. I knew that I couldn't resharpen it unless I re-shaped the tip but I wanted to look at the edge after sharpening it.

Just to clarify, my Fostec illuminator 'machine' isn't on the same desk that the MM-11 is. Of course the light itself is under my stage. Even my mouse is located on another desk, so I'm not getting vibration from those two items. That is if I'm getting vibration in the first place. I don't think I am at least in this image. I carefully watched my dial indicator and didn't see any movement on the needle, so the stage isn't dropping/drifting. It has 1um divisions. Like always I paused several seconds before taking the next image. Of course I don't see any movement in the trinocular head. 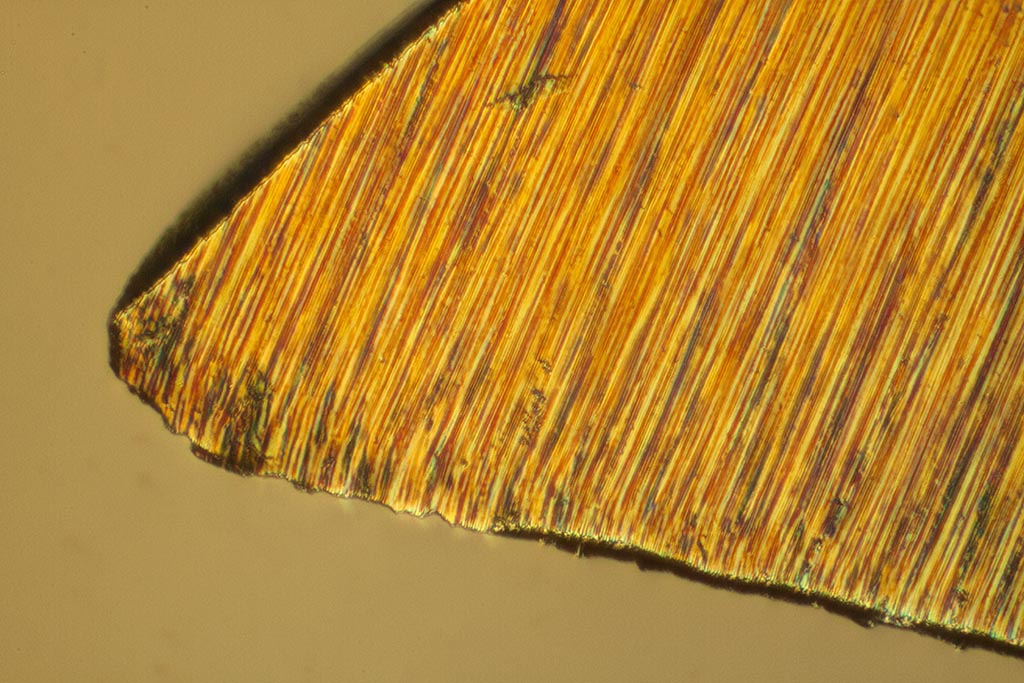