This was my very first stack 18 months ago when I got my new Nikon Ni Eclipse microscope. It's not perfect, but I was pretty happy with it because it demonstrated the possibilities.

In the image you can see fungal hyphae and some coiled conidia (asexual spores). 400x 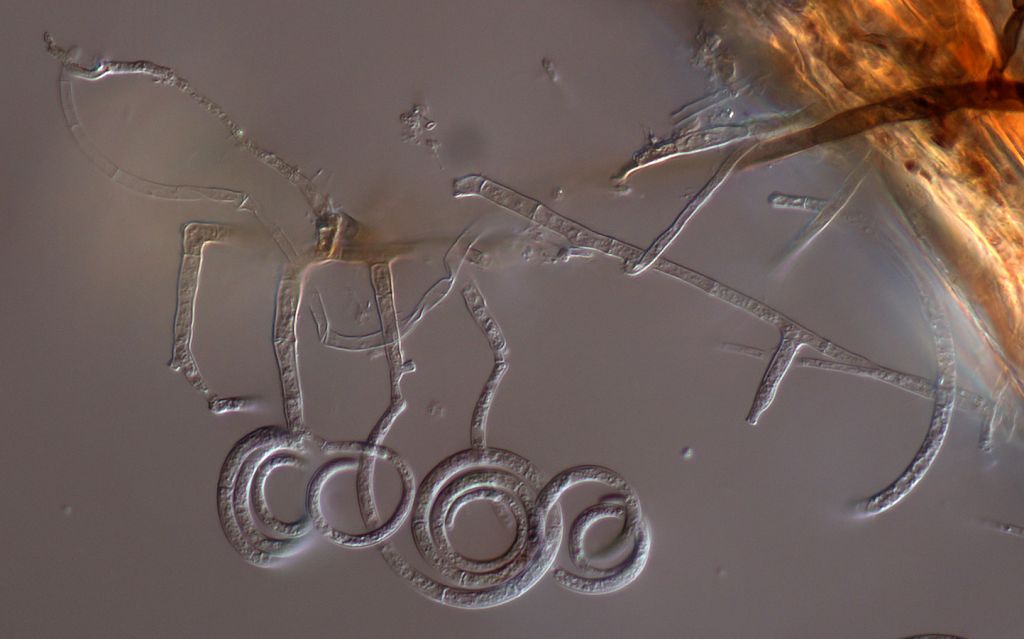 That's interesting. I've never come across the concept of "fungi" living in water before and would have labelled these "some kind of algae" if I'd found them. That's my new thing learned for the day then

Thanks. Do they attach to substrates, or just float freely?
Top

I believe they are responisble for the foam often seen on rivers in the autumn as fallen leaves are broken down.

The asexual spores (conidia) have range of shapes https://blog.mycology.cornell.edu/2008/ ... nightmare/

Terence Ingold's Obituary. He published papers into his 90's.

A published tribute to Ingold on his 80th birthday listed 174 publications; in the next 20 years he published another hundred. Not many careers reach their half-way point at retirement age. One of his last papers, on the germination and anatomy of fungi known as smuts, was written when he was aged 93.

These particular freshwater fungi were found on a decaying submerged piece of wood. The hyphae live inside and on the wood, happily breaking it down. When you take a decaying piece of wood out of the water and incubate it for a few weeks you start to see their reproductive structures appear, like the one in the photo. They can either be their sexual form (usually ascomycetes) or asexual form as in this photo.

They also live on leaves, hair, dead and live insects. Basically anything that dies and falls into water will be colonised by fungi.

Their spores are floating freely in the water, but the when they land on a substrate they germinate and produce hyphae to colonise the substrate.

There are about 500 species of freshwater fungi described, but we are always finding more. There are also about 500 marine fungi which are usually different species to the freshwater species (although there is some overlap). We've only described about 5-10% of the fungi.

Terence Ingold was the grand old daddy of freshwater fungi. He left a big legacy.

Thank you Sally. I look forward to seeing more of your work - please keep posting

Wonderful! The camera is canon or infinity?
Top

These things are quite interesting, all fungi are I think. As for myself I find the entomopathogenic fungi e.g. cordyceps fungi to be most interesting and a horror of horror's should it mutate to infect humans.
Top