Buying old Victorian slides that were originally mounted for incident illumination is a lottery. Subjects were often glued to a disk of black paper or matt black painted circle, using a gum such as Gum Arabic. The mount would be completed with a thick ring and cover slip to create an air-filled cell. The main problem is that fungal spores are able to germinate within the cell and destroy or damage the subject. It is seldom possible to check whether this has happened before purchasing, so disappointments are not infrequent. When a perfect specimen is found, however, it's all the more rewarding. I recently bought an old slide sold by Watson & Sons simply labelled Hair of Sea Mouse, that turned out both to be in good condition, and fascinating to look at.

' The sea mouse, (Aphrodita aculeata), is a marine polychaete worm found in the North Atlantic, the North Sea, the Baltic Sea and the Mediterranean. The sea mouse normally lies buried head-first in the sand. It has been found at depths of over 2,000 metres (6,600 ft).
Its body is covered in a "dense mat" of setae (hairlike structures) from which the name "sea mouse" derives. '

It is these setae that are mounted in the slide on a black background. The setae appear iridescent in normal daylight in the living creature. Again to quote Wikipedia :

'The spines, or setae, that emerge from the scaled back of the sea mouse are one of its unique features. Normally, these have a red sheen, warning off predators, but when the light shines on them perpendicularly, they flush green and blue, a "remarkable example of photonic engineering by a living organism". These colors are believed to be a defence mechanism, giving warning to potential predators. The effect is produced by many hexagonal cylinders within the spines, which "perform much more efficiently than man-made optical fibres".'

I used incident polarised light on a Leitz Ortholux with the Ultropak incident light attachment http://www.photomacrography.net/forum/v ... 450#139450 with a Leitz X 6.5 UO epi objective. Rotating the polariser or adding a Perspex retarder changed the colours through red, green and blue as described above and something of the structure of the setae could be seen.

The first two images are sections from a 28 image stitch made with Microsoft ICE. 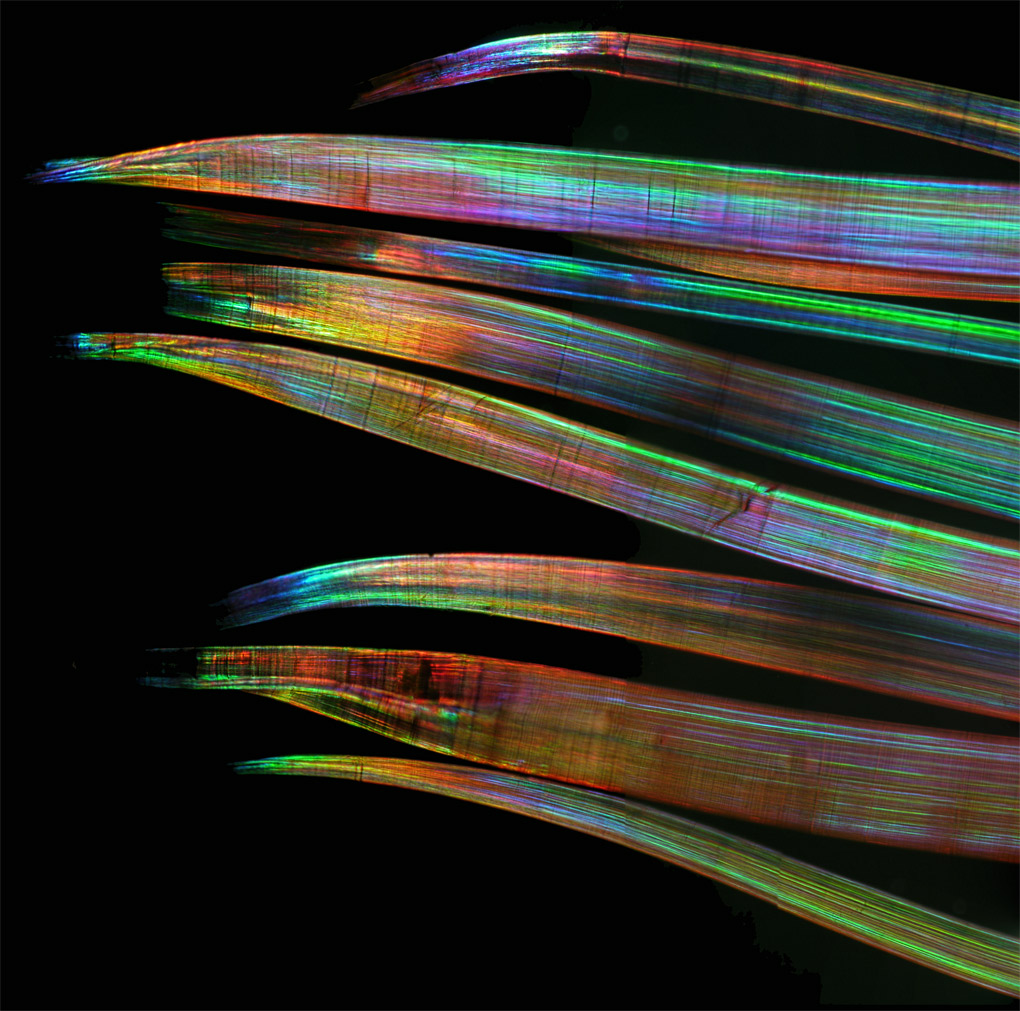 The following two pictures are crops to show more detail of the structure of the setae. 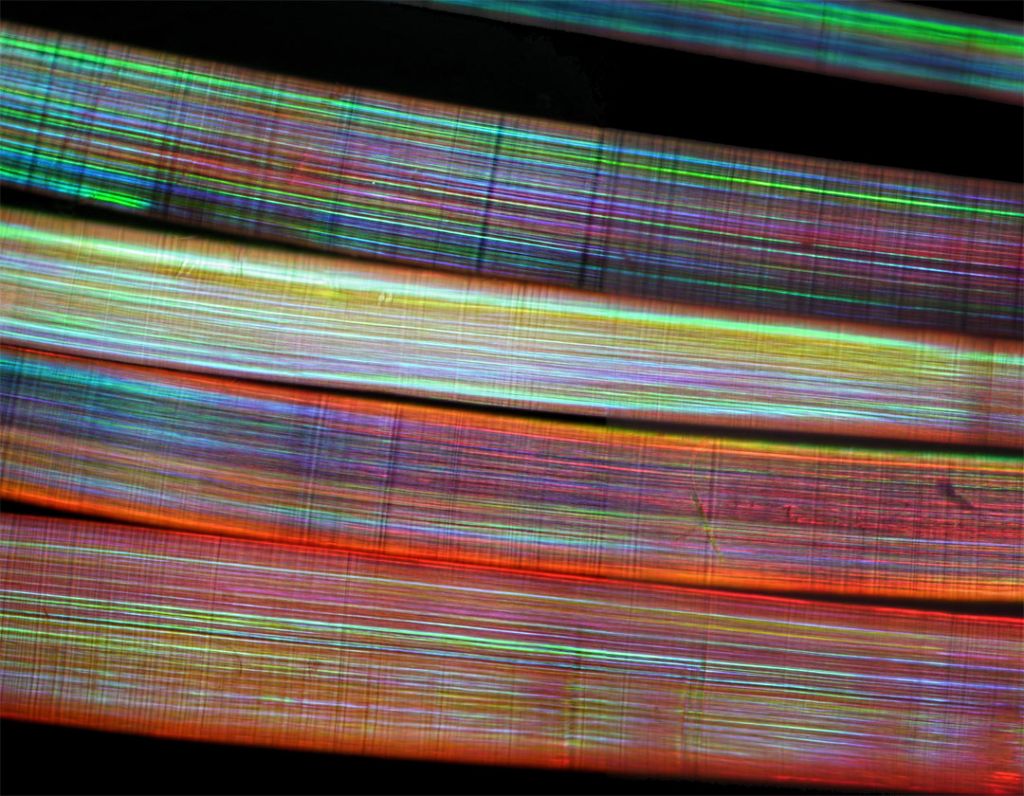 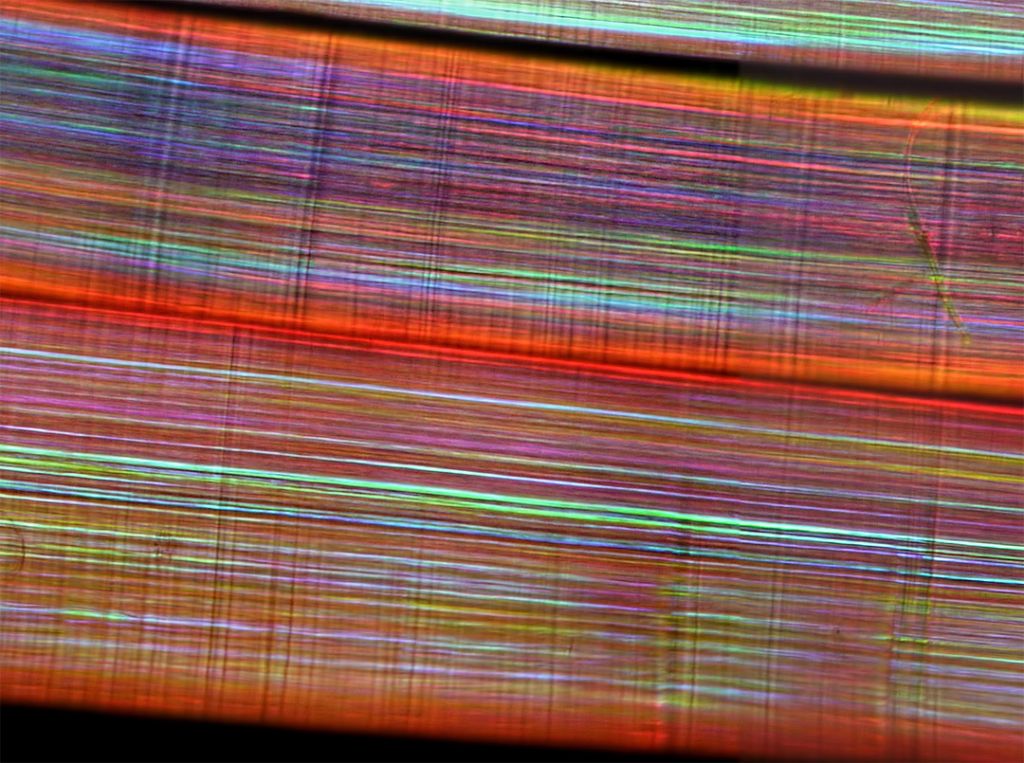 A full length view of the setae from the 28 image stitch. Link to a larger zoomable version http://photosynth.net/view.aspx?cid=468 ... 313d2a16aa

An old thread, but I finally got to see a live example of this curious creature. Normally they live in quite deep water, but occasionally get cast up after stormy weather. On a recent bird watching trip to the Dungeness peninsular on the English Channel we came across a live sea mouse on the beach after several days of strong winds. The fine hairs (setae) can clearly be seen covering the body, and even on a dull overcast day their multicoloured appearance, seen so beautifully under the microscope, is visible. 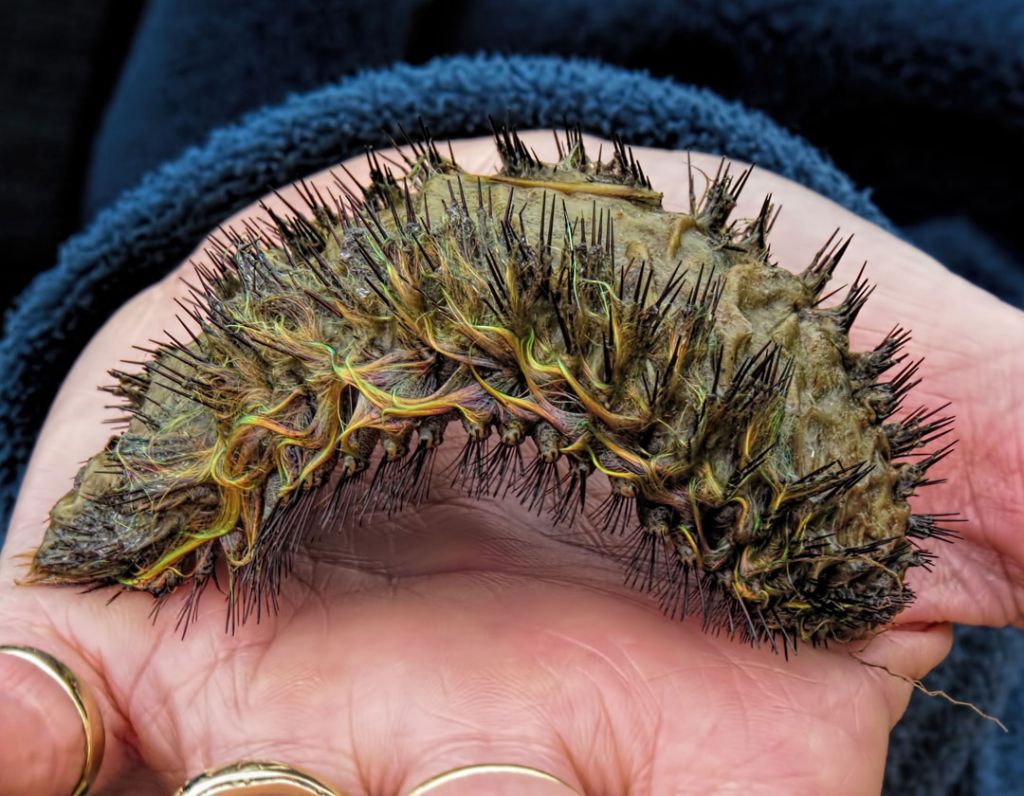 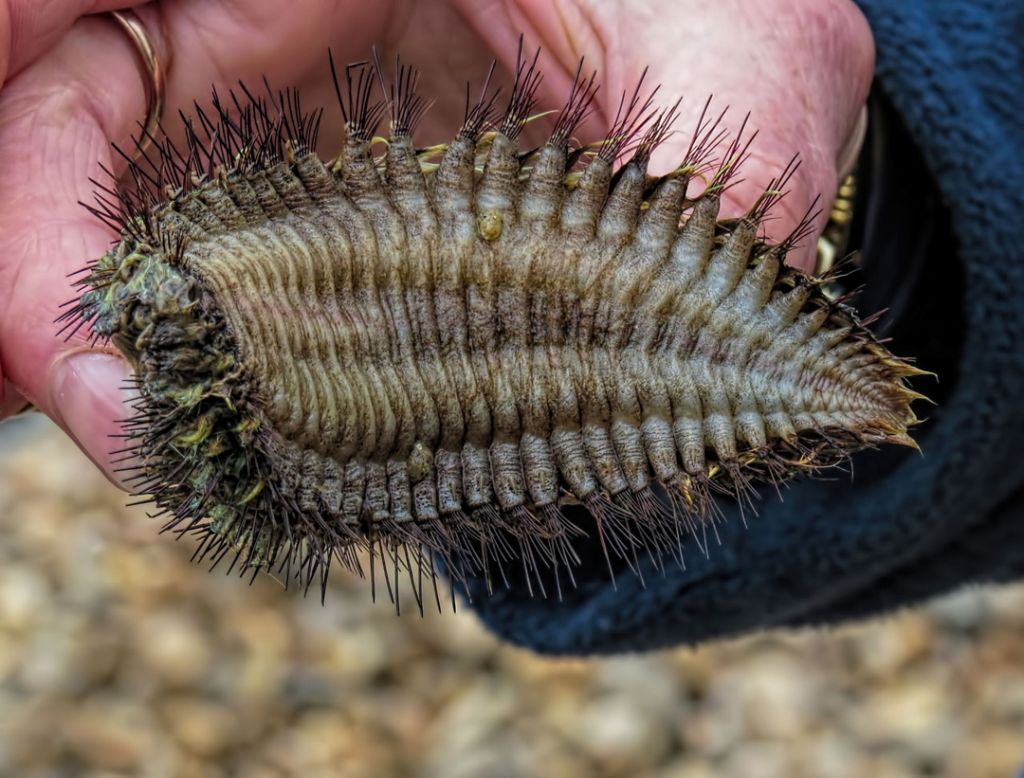 Most interesting pictures and info!

All that nice optical properties make no sense at big depths for one simple reason: the lack of light and its blue monochromatic caracter if it arrives.
But this beast also lives at shallow waters at least in the Mediterranean, although making most part of its life buried in sediments....

Many characteristics of living beings can't really be considered adaptatives but just remains of their evolutive history, I ignore if this could be the case.
Pau
Top
Post Reply Previous topicNext topic
12 posts • Page 1 of 1