Here's a quite amazing round of fossilised hardwood from the Rattlesnake Hills located in the east of Washington State. Growth rings are clearly visible in pic1, arching from bottom left to top right.

I have no definite info. on the geological period - although I do have a date for the Cody Shale of the Rattlesnake Hills, placing it at Late Cretaceous (specifically the Campanian Faunal Stage, between 74 and 80 million years ago).

The dealer that I bought this piece from had ID'd the species as beech. Now this guy is one of the most experienced and knowledgeable dealers of petrified wood in the US and not surprisingly the microscopic, fossil evidence fully supports his identification. Consistent with beech wood, the microscope shows a vessel (or pore) structure that is semi-diffuse to diffuse-porus. This is evidenced by the higher concentration of pores in the early springwood with vessels still being laid down in mid to late summer.

This is a lovely piece (I will post a close-up of the whole round in the Close-up/Macro forum). Whilst some areas of fossilisation has left a very detailed record of the original cell structure, other parts are fuzzy and indistinct.

Taken with Olympus SP-350 thru Meiji EMZ-5T. Please use the scale bar from pic1 to infer scale in pic2.

[UPDATE] I have posted an image of the cross section in the Macro Forum and it should provide a useful frame of reference for these images.
Please see: Close-up/Macro Forum posting. 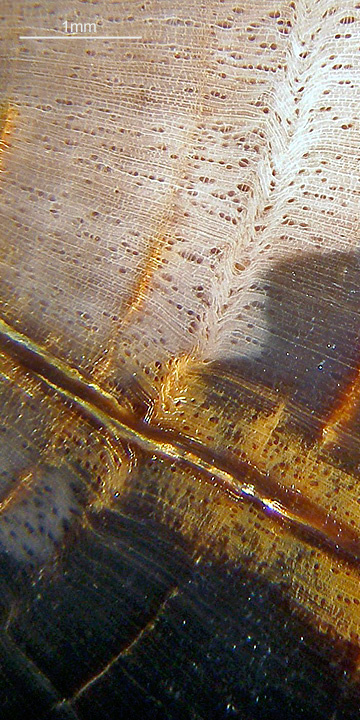 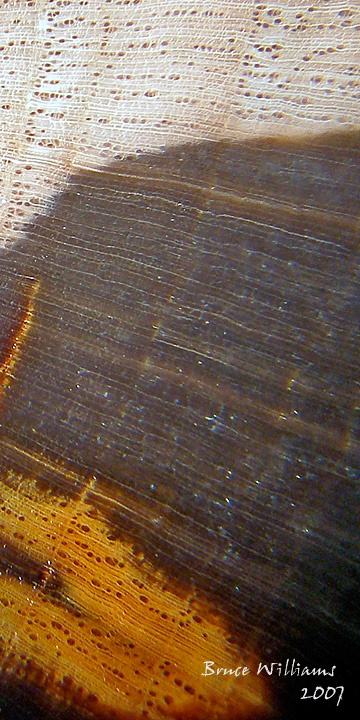 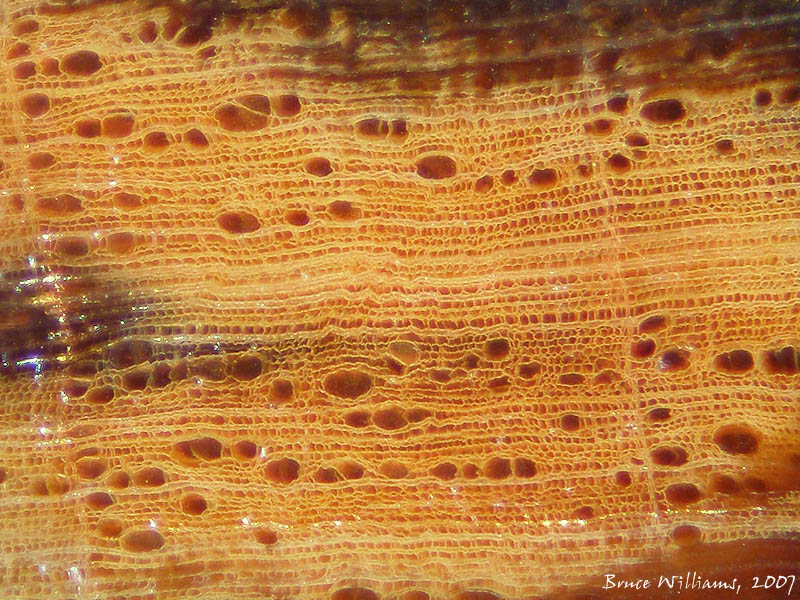 Look at the cell texture on that thing. If you didn`t say it was a fossil, you would think it was still natural wood. Excellent photos Bruce, simply amazing.
Take Nothing but Pictures--Leave Nothing but Footprints.
Doug Breda
Top

edit: oops...just realized I'm off about 40 miles to the north here

Figure I better correct it since the Rattlesnake Hills are practically in Rik's back yard, so I'm sure he won't let it slip by

But the info in the link should reflect some of the origin history of this fossil.


Great shots Bruce! Just last week I stopped at the very area your fossil was found. No more trees, but I thought you might be interested in seeing what is "sprouting" there now. The area is rolling hills near the Columbia River. Few trees to be seen now... mostly low sage-like vegetation. There is a 7500 acre state park there called "Ginkgo Petrified Forest". I think you will enjoy this info:
http://www.historylink.org/essays/outpu ... le_id=7396

Next to that area is the new Wild Horse Wind Facility. It would not surprise me if the fossil you photographed was found within a only few miles of these wind generators! 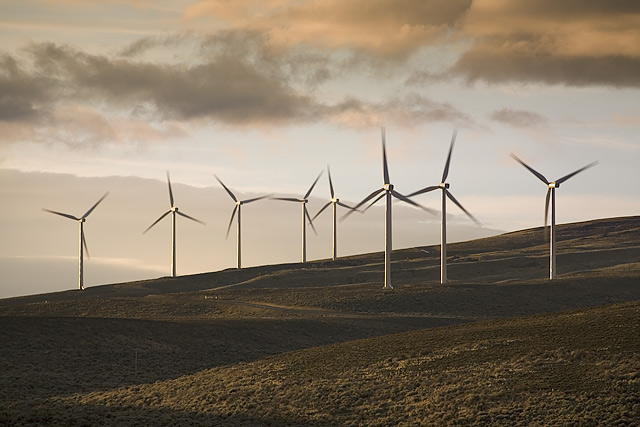 btw... a picture like this gives no sense of scale so here are some numbers...
Each of the three blades is 129 feet long. The full rotor diameter is 264 feet ..50 feet more than the wingspan of a Boeing 747!
Top

Wonderfully preserved wood. Seems you have the whole cellar full of things like this.

Thanks for your encouraging comments guys.

Charles - thanks the photograph and for the great link. Your info was very interesting indeed, moreover it went some way to provide the confirmation I needed to confidently age the fossil wood.

I know that the log was originally dug in the 1980's (it came from about 18 foot down) on the Vic Wyatt Ranch (VWR) in the Rattlesnake Hills (so far I have been unable to pinpoint an exact location for the ranch). However I have located other fossil wood collections that include specimens from the VWR. These pieces have been recorded as coming from the Columbian River basalts which is Mid-Miocene in age.

I can be even more precise: records show that these basalts errupted over a relatively short 1.5 million year period (from 17 - 15.5 MYA). So that would give a likely age for this piece of ~16 million years.

Your Ginkgo Petrified Forest State Park link dates the park to ~15 MYA which (although central WA) is still supportive of my dating to the Mid-Miocene epoch.

It is just amazing at how well the cellular structures of the wood are kept so intact or even more so, how they were so well preserved to begin with. Wonderful images Bruce.

(If you are really curious to nail down the location, I could send you a mailing address and phone number)
Top

Thanks for that information Charles. I do know that the Vic Wyatt ranch is (was?) in eastern Washington so he could well be the guy. If you could let me have his address I'll drop him a polite note of enquiry - and keep my fingers crossed

. Hmmmm...I don't see any overhead cabling either so altogether quite an impressive project!

The only polution with this sort of energy is visual - and possibly noise too? ....but I guess even that depends upon your point of view. Hmmm...I suppose they do present a certain stark elegance - maybe

Wow -- lots of great stuff in this topic!

(I've been offline for a day and just got back.)

Bruce, these images are a perfect treat. Wonderful detail preserved by the fossilization, and you've captured it perfectly. I could imagine some professor's entire lecture wrapped around these two micrographs! Great stuff.

When I did a Google search for Cody shale "Rattlesnake hills", the first hit was to an American Museum of Natural History page that says "United States // America // Wyoming // Natrona". Skimming many other results for just "Cody shale" says Wyoming also. I'm thinking this is not from my area. Natrona County, Wyoming is about 500 miles east of here.

About the wind turbines... Yes, they're huge. HUGE. I've never seen a real picture that does them justice. Perhaps a pasteup might -- "Here's what an ordinary house would look like, sitting next to one of these behemoths."

They are controversial, but not wildly so. In addition to visual and sound pollution, there is concern about straightforward mechanical effects on wildlife, notably killing birds as they migrate through at night, crossing the ridges at low altitude. Nope, I don't have a clue what the statistics are -- I just look them up on the web whenever I want them. Google search on walla walla wind turbines. (You don't actually need the second "walla" in the search, but "Walla Walla, Washington" really is the name of the town where the first nearby farm of these things was put up.)

It's interesting to note that highly detailed maps of these installations are not so easily found on the web. They used to be, but such things were mostly pulled off the net shortly after the "9/11" terrorist actions made people sensitive about the ease of planning such things from public information sources. On the other hand, it's not like they're really difficult to find. Google Maps here will get you a nice hi-res satellite view of some turbines -- mostly their shadows actually -- and then you can zoom out from there.

After re-reading the whole topic more carefully, I went back and re-searched* Google looking specifically for "Cody shale" Washington. I still can't find a single reference that associates Cody shale with any state except Wyoming. There are some references to Cody shale in the "Oregon basin", but that turns out to be in Wyoming too.

Gobs of questions are popping up in my head. I know that in insect collections, it's very common for specimens to be labeled in ways that have proved easy to misinterpret. There are lots of cases in which abbreviations did not mean the same thing to their author and to their readers, or where specimens from multiple locations ended up getting the same label, or where "in the XYZ collection" and "collected at XYZ" were thought to mean the same thing, or where labels just got mixed up.

If you get more information, I'll be very interested to hear what the connections turn out to be in this case. It's certainly not impossible that there's some chunk of Cody shale coming from 18 feet down at Reardan, Washington. But without better evidence about the provenance of the sample, I wouldn't stake much on that bet.

*re-search: to search, then search again.

Edit: Ah! Re-reading your posts, it looks like the connection between "Cody shale" and "eastern Washington" may have only been through the part about "Rattlesnake Hills". In that case, I'm inclined to think spurious association -- as Charlie points out, and my first search found, there are Rattlesnake Hills all over the western US. Everything else -- the part about 18 feet down at Reardan, and Columbia River basalts, and Gingko Park, and 17-15 MYA -- fit together quite nicely.
Top

Thanks for your encouraging comments Rik and for your help in trying to pin down the age of the fossil.

It might help if I just summarised the known facts and latest thinking.

Known: The log was dug (with the help of a bulldozer

) from about 18 feet down on the Vic Wyatt ranch located in the Rattlesnake Hills in eastern Washington. The seller ID'd the wood as beech and annual ring and microscopic pore structure seem to support that opinion.

I said in my original posting "I have no definite info. on the geological period", and that is still the main unknown (however I do think we're a lot closer to the answer now). Other fossilised wood collected from the VW ranch has been recorded as coming from the Columbian River basalts. These basalts errupted between 17 and 15.5 MYA. The relatively local Ginko Petrified Forest dates to ~15 MYA. So at this stage the best estimate is ~16 million years old (Mid- Miocene).

Rik, As you rightly concluded, my earlier (provisional) assumption of Late Cretaceous was based on dating of the Rattlesnake Hills' Cody Shale (I had no idea that there could be more than one "Rattlesnake Hills" in Washington State

I will be contacting a Victor Wyatt (thanks Charlie) which with luck will provide us with the definitive answer.

Bruce,
It's been a fun little exercise... what's a million years here or there

Pint of Guinness says we found the right location!

Sorry I took your post on a little detour. Before turning my brain on I just thought your sample came from the Gingko area where I had just been a few days earlier. When I think of fossilized wood in Washington, that's the first connection I make.

.. one last tidbit though...
to give a sense of the size of the generators near Gingko, take a look at what they would look like if you glued a couple of 747's to them!
Top

I have been in contact with the guy who originally dug this piece and he gave me some new information. He said that the Vic Wyatt ranch no longer exists but is now (part of?) the Spaulding ranch. He said that after Spaulding got the ranch in the 80's he had an arrangement with the owner to dig for fossil wood in that area. He also said that one of the logs brought up by the dozer was 11 feet long and 29 inches in diameter

He said that he would send me a map of the area that was the old Vic Wyatt ranch - so hopefully will be able to pin-point the location once that arrives.