Not a worm of course, but the larva of a midge, nevertheless the common name of glass worm is highly appropriate for this very transparent organism. As anyone who has worked with it knows, it is remarkably quick to evade predators, and questing pipettes trying to transfer it to a slide. Chaoborus larvae are also remarkably resistant to the lidocaine used to tranquilize them, but that's another story

. To do this escape act it needs an impressive array of muscles which show up brilliantly in polarised light thanks to their birefringent properties. The recent postings by Charlie Krebs, and Graham Matthews have illustrated this very nicely indeed.
At the recent microscopists weekend at Juniper Hall in the UK, referred to by Graham, Chaoborus hunting became a bit of a popular sport, as the accessible water sampling points didn't contain a very rich array of organisms. Here are my efforts on this very attractive subject.

First some stitches of the whole creature. I made a couple of with X4 and X6.3 objectives, and one with a X10 objective which was over ambitious, but from which I rescued several usable crops. 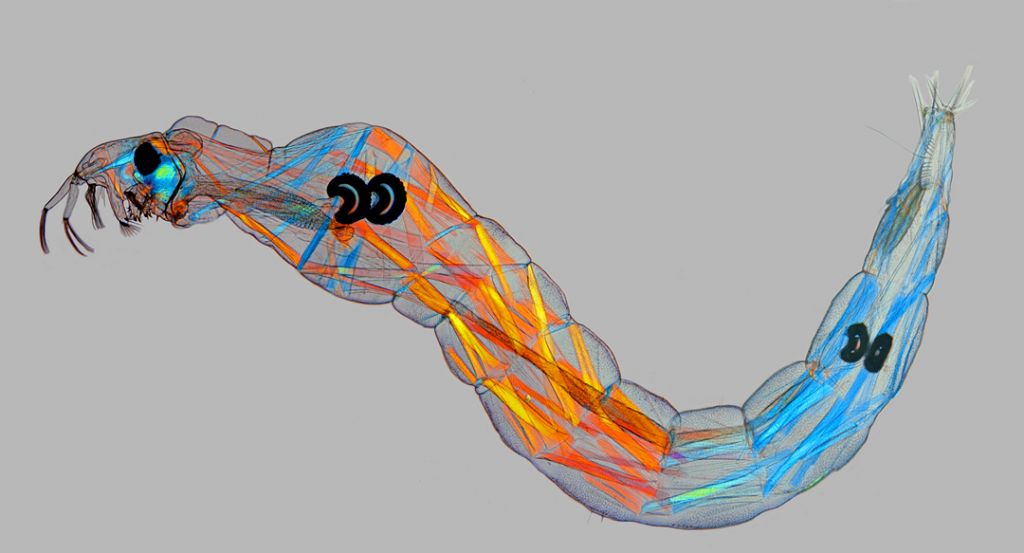 All images are with a Zeiss Standard microscope with a Leitz X10 periplan used as photoeyepiece in a Pentax microscope adaper with a Canon EOS 40D attached via an M42 -> EOS adapter, using LiveView mode and a simple wired cable release. The first image used a Zeiss X4 planapo objective and was stitched from 38 images with Microsoft ICE. Illumination was partially crossed polars with a rotatable retarder made from a piece of cellophane CD wrapper. 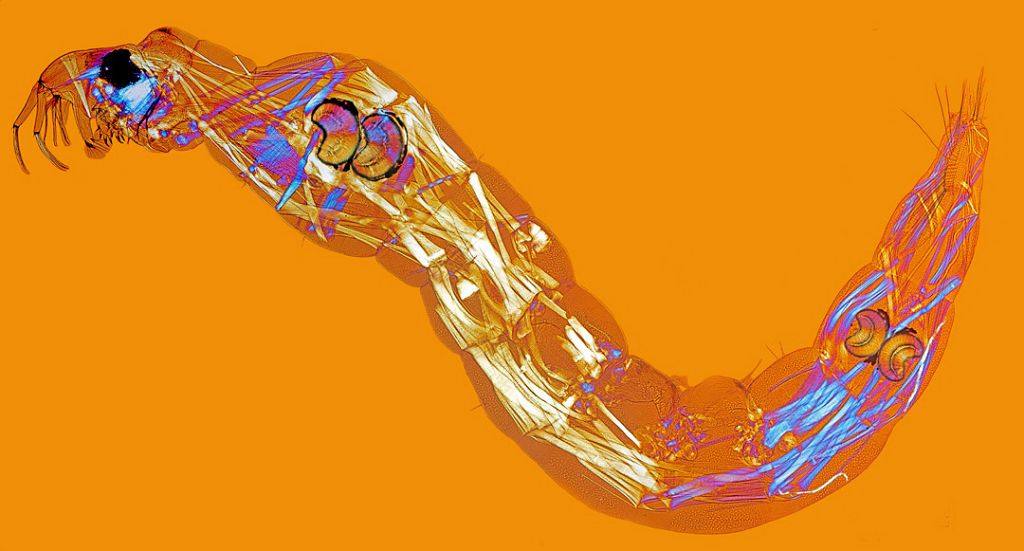 The next image is a larger stitch of 68 images using a Zeiss Neofluar X6.3 objective. illumination was polarised light plus a perspex wave plate.

I then tried a stitch using a Zeiss X10, 0.30 planapo objective. This took 100 images for, I thought, full coverage, but when it was too late to repeat it, proved to have several missing sections. Nevertheless parts were recoverable as crops and were worthwhile. The first is a crop of the head section. Illumination partially crossed polars with cellophane retarder. 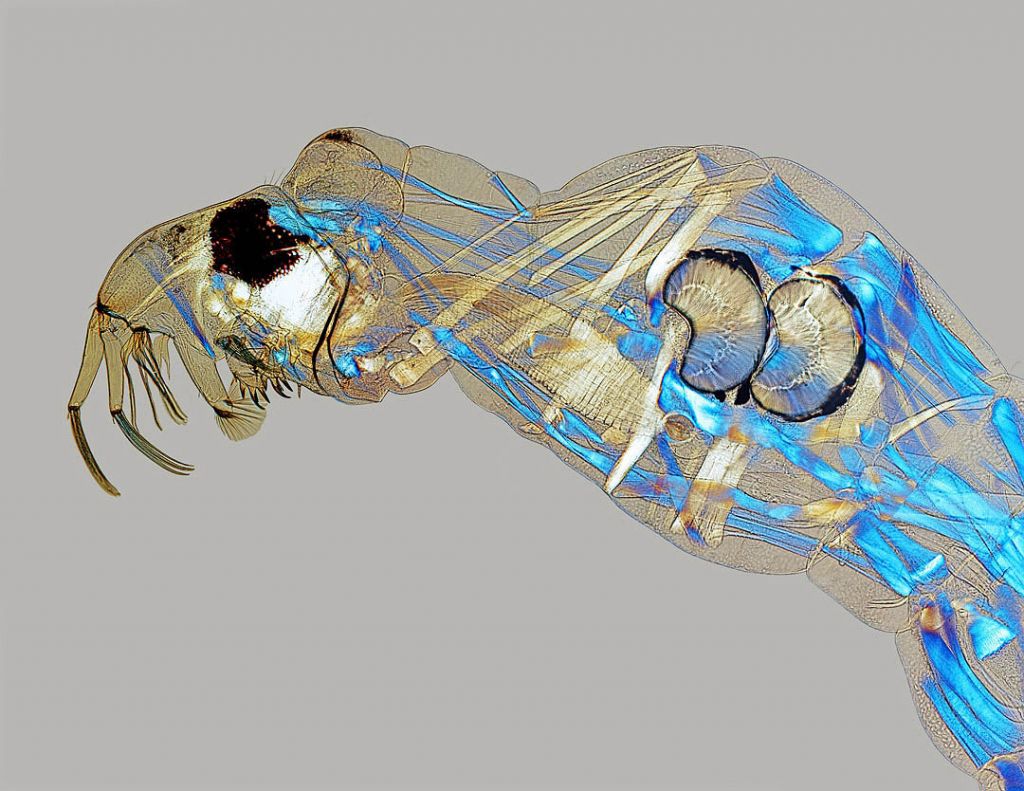 The paired anterior and posterior buoyancy 'floats' are truly fascinating organs. The anterior pair show up nicely in this tighter crop from the X10 stitch. 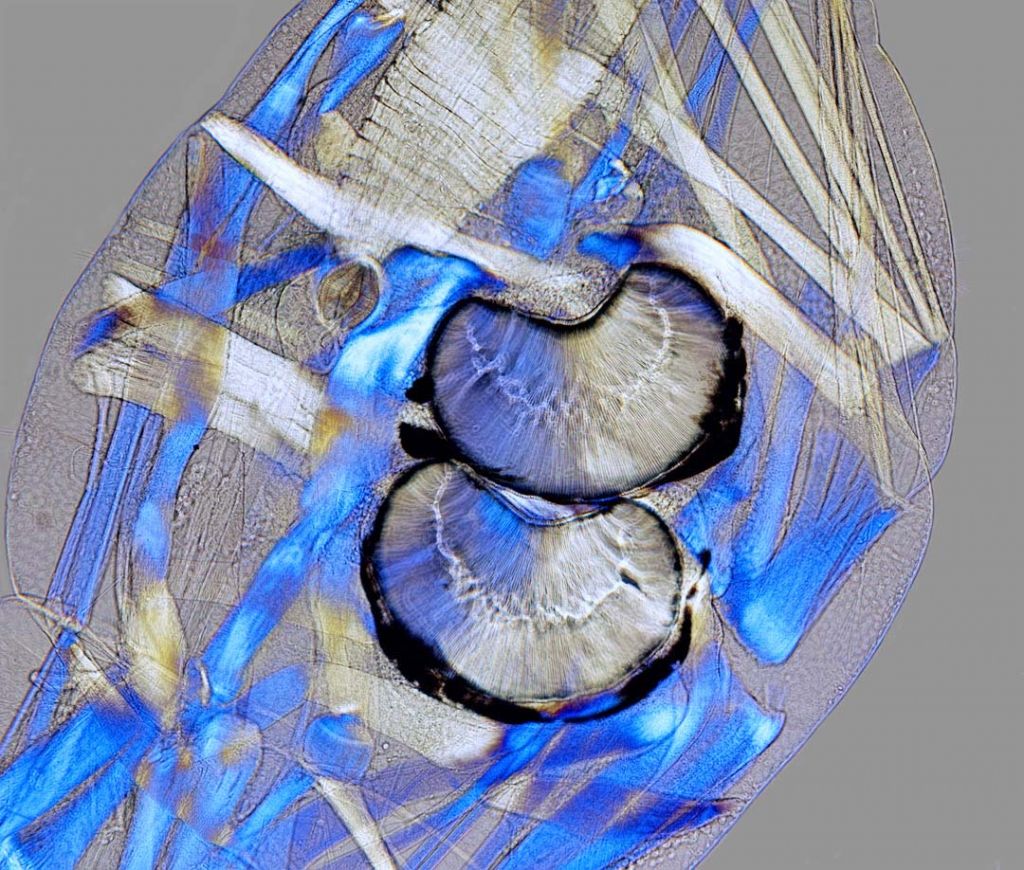 This is a crop from the middle portion of the abortive 100 image stitch. 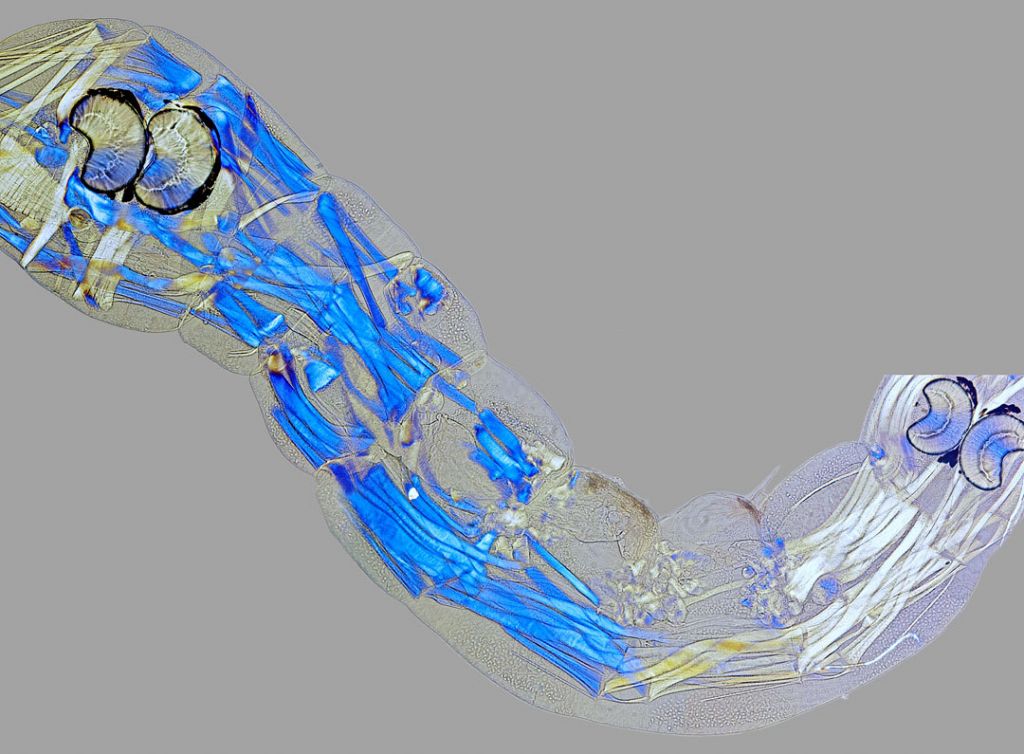 And this is the 'tail' end. 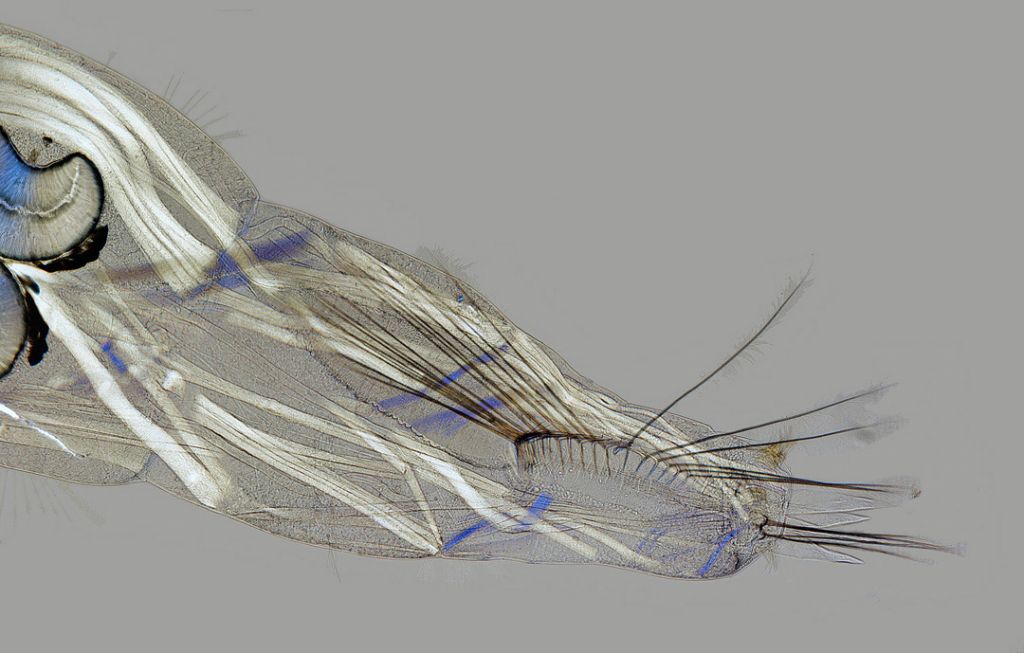 These are great .
Thanks for sharing .
Top

I must say I was really fascinated by the four buoyancy organs that this creature uses to keep itself level in the water, and I guess, regulate the depth at which it swims. I could find rather little about how these work. In an uncompressed specimen they are kidney shaped, clearly full of air, and have prominent splodges of pigment on their distended surface. This is shown very nicely in the fourth image of Charlie Krebs' post http://www.photomacrography.net/forum/v ... =chaoborus . As the liquid under the coverslip evaporates, the coverslip compresses these structures more and more until the air is expelled and the internal structure is plainly visible. The bag seems to be lined with a rib/bellows like structure which keeps it rigid but inflatable in life. This image was taken after the posterior pair of bags had been fully deflated by pressure from the coverslip. The objective was a Zeiss X25, 0.65 Planapo and this is a stitch of 16 images with Microsoft ICE. 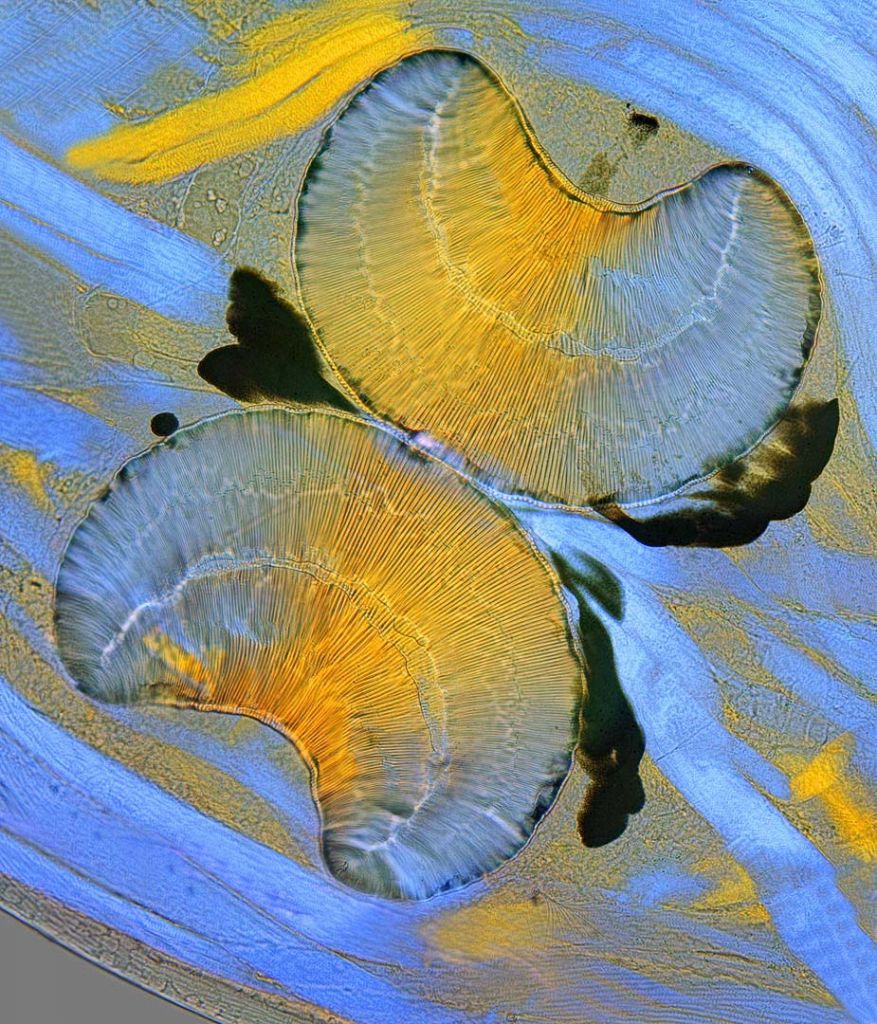 I assume these bags are filled with air via some kind of valve and tracheal system which can take in air when the organism comes to the surface. This structure, which can be seen just to the left of the anterior pair of organs looks like it might be some kind of valve to allow in air, and then seal to exclude water. 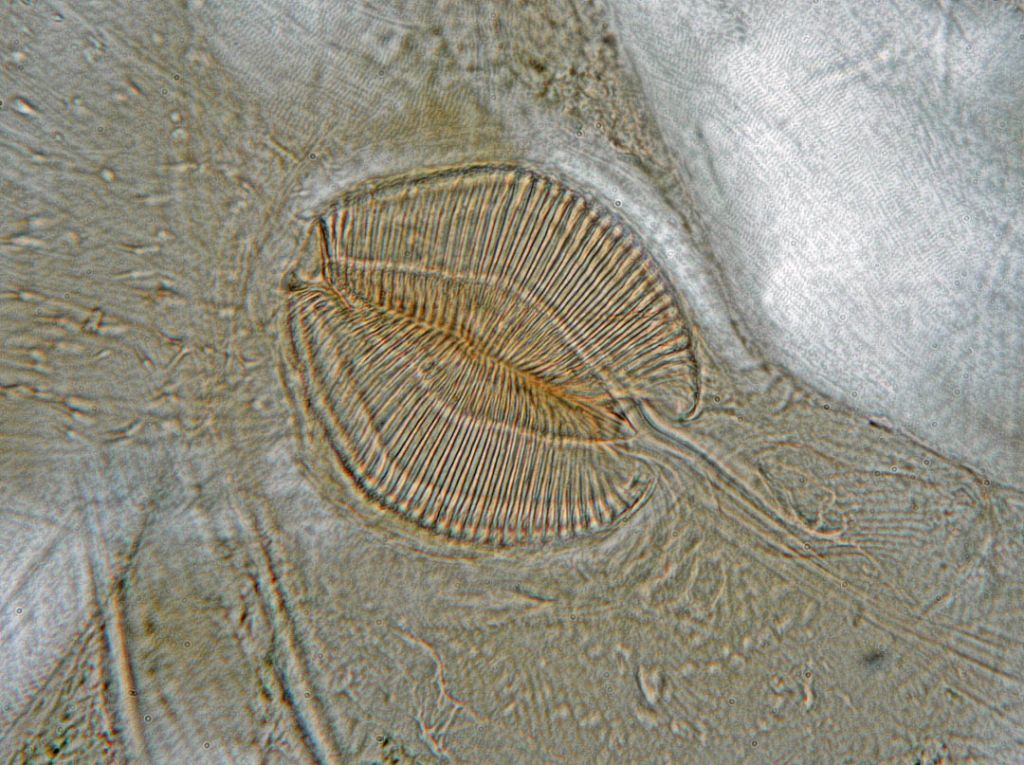 I love the first one.

Great!
#1 and #3 of the first post and #1 of the second post I find aesthetically so appealing that I would contemplate to hang them as large prints over the sofa, had I photographed them myself.
Guess we might see some photographs of Chaoborus at the Olympus and Nikon competitions.

--Betty
Atticus Finch: "You never really understand a person until you consider things from his point of view
- until you climb into his skin and walk around in it."
Lee, N. H. 1960. To Kill a Mockingbird. J. B. Lippincott, New York.
Top

Thanks very much Rogelio, Betty and Michael. Your comments are very much appreciated. Chaoborus is a pleasure to photograph.

As I didn't have a DIC-equipped microscope for the Juniper Hall excursion, I took a specimen home to have a look at under my Nikon Diaphot with DIC. Unfortunately it didn't travel that well and looks a bit the worse for the experience. Anyway here is a head end crop from a 37 image stitch made with Microsoft ICE. Microscope was a Nikon Diaphot with DIC and the Nikon X10, 0.25 Plan DIC objective. Camera was a Panasonic G3. 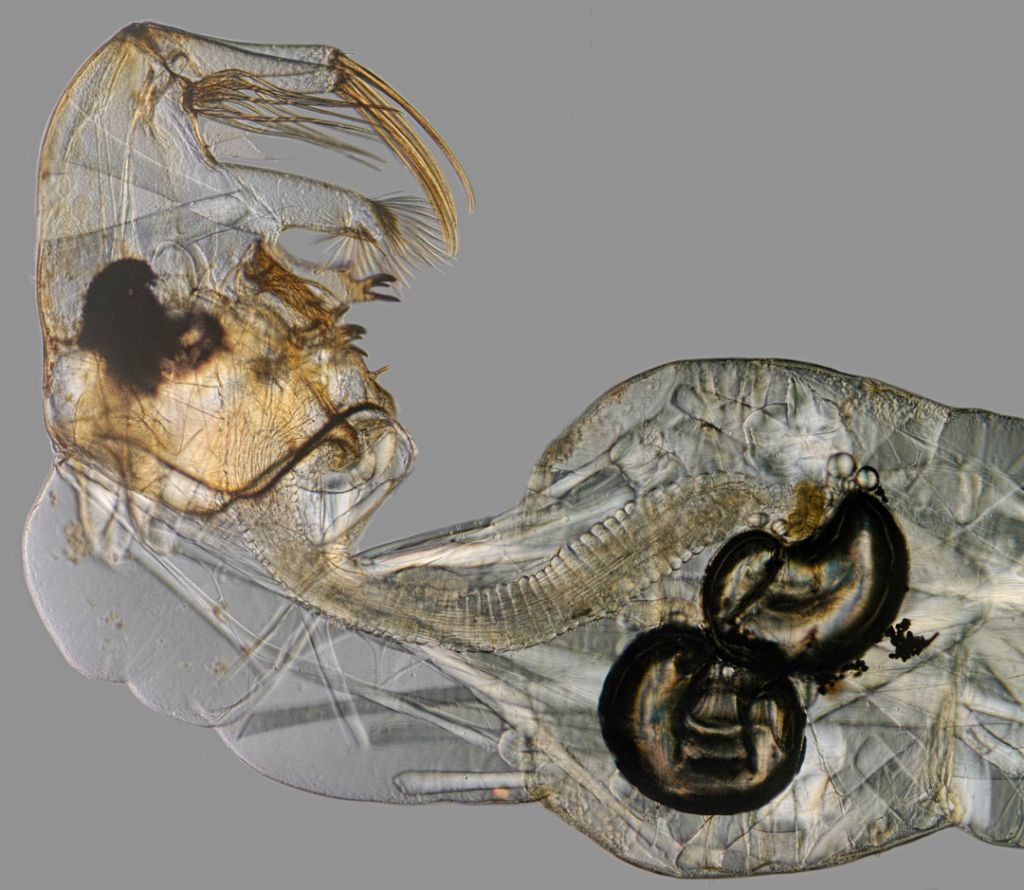 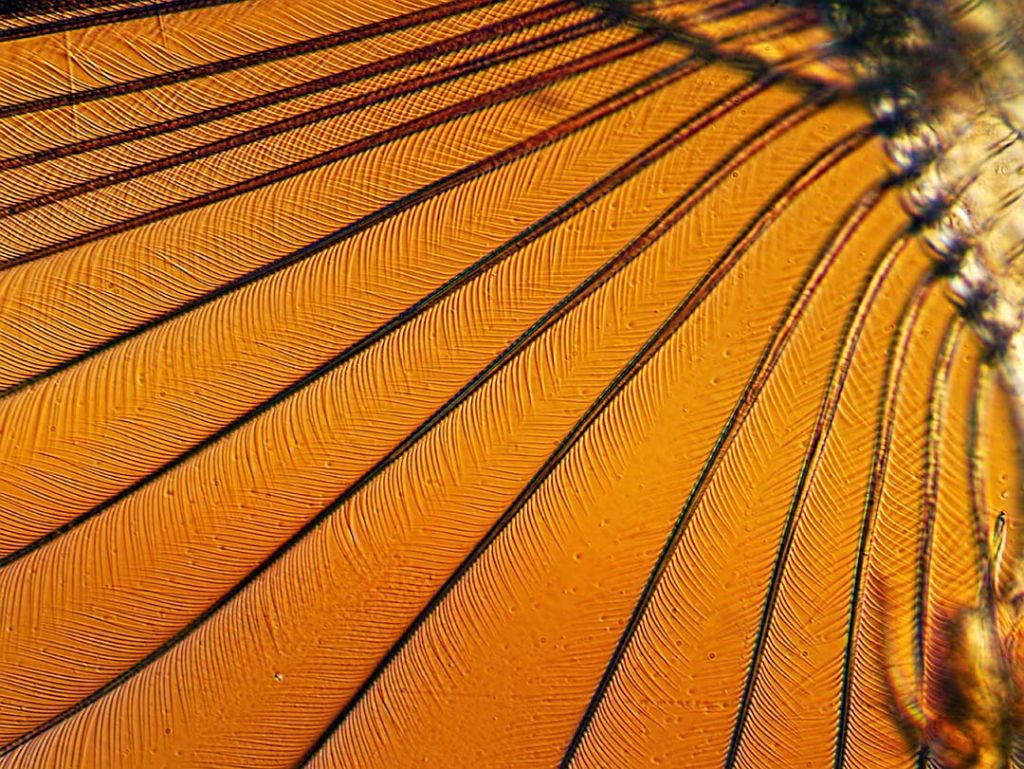 Nice images David - I especially like the feathery tail as a very striking image, but also the "valve" because it shows an intriguing structure. The more you look at Chaoborus, the more you find. I'm sure we will all be taking even more pictures in future - it is such a versatile subject.
Graham

Great images! We've certainly provided this species with its "15 minutes of fame".

Thanks Carlos and Charles.
Charles --- 15 min of fame? It must be half an hour at least already, and you know how Holywood loves a franchise!

Last shot in this set. This is a detail view of the anterior buoyancy organs after flattening by the coverslip. Zeiss X25, 0.65 planapo objective, stitch of 22 images with Microsoft ICE. Illumination polarised light plus cellophane retarder. 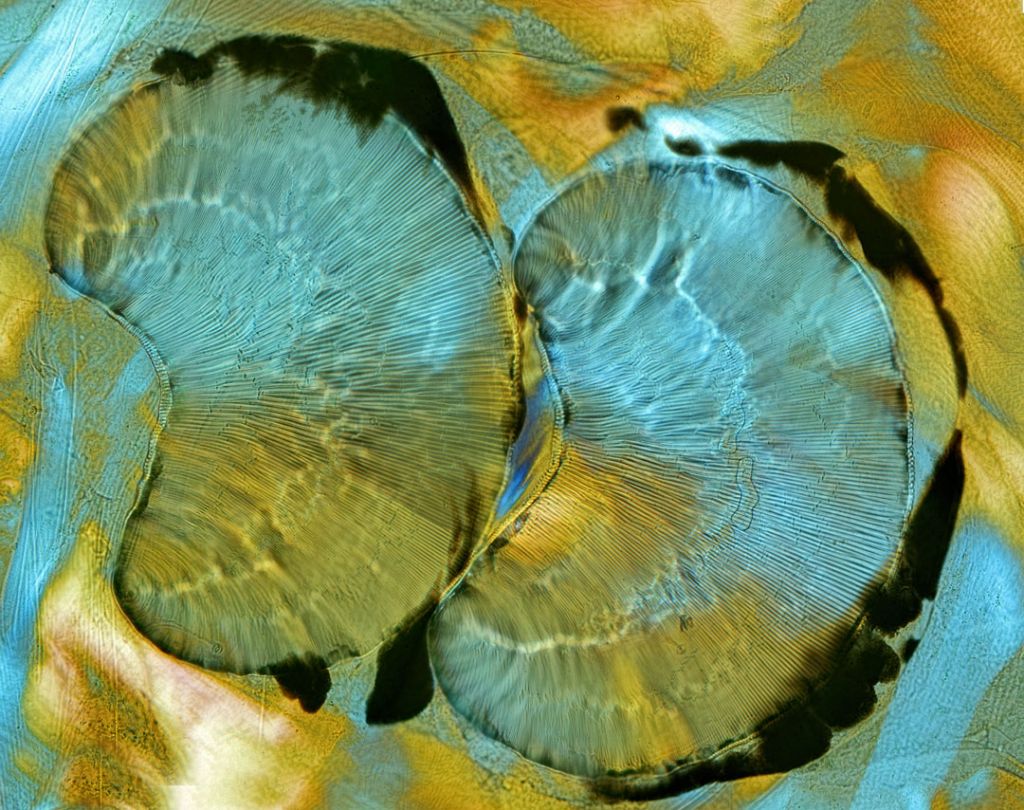 All of the images are very good, but I like the most the 1, 3 and 7 th.
Especially the 1 th one is impressive. It is clear and very graphic.